While the BJP has rarely talked about the community in a positive light, the Congress too is ignoring Muslims this time as it tries to build a soft Hindutva image in the state. 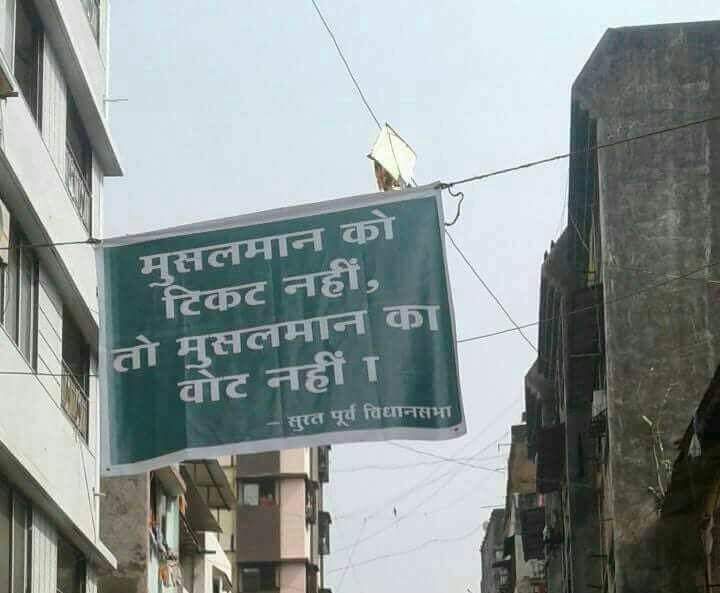 Poster in Surat East saying 'No votes from Muslims if no tickets to Muslims'. Credit: Damayantee Dhar

Ahmedabad: In poll-bound Gujarat, both the Congress and the Bharatiya Janata Party (BJP) have taken to social media to try and belittle each other using videos evoking ‘Gujarati pride’. However, one particular video that has left many shocked has not been claimed by either the BJP or Congress IT cells.

The one minute and fifteen second video opens with the line, “Gujarat ma sanjhe saat pachhi avu thai shake che (This can happen after 7 pm in Gujarat)”.

The scene cuts to a poorly-lit road where a young girl, likely a teenager, is walking alone. She is visibly scared when music clearly resembling the azaan plays in the background. Then a couple is shown at home; the man is worried and the woman is praying to Krishna. In the third scene, the same woman is sitting and the man is pacing in a drawing room, both deeply worried, clenching their fists in tension. Just then, someone rings the doorbell. The young girl enters the house and hugs the woman. The couple sits beside the girl, their hands on her head, as if all of them are relieved. The woman speaks to the camera: “Ek minute, kem navai lagi ne ki aa Gujarat ni vaat chhe? (One minute, are you surprised that this is an incident in Gujarat?)” The man joins: “Bavis varash pehla avuch thatu thu ane avuch thai shake che jo e loko avshe (Twenty-two years ago, this used to happen in Gujarat, and it can happen again if they return). The girl adds: “Pan don’t worry, koi nai ave kem ke ahe Modi che (But don’t worry, nobody will return because Narendra Modi is here)”. The video ends with the words “Apno vote, apni suraksha (Our vote, our safety)” written in saffron.

A complaint has been filed with the Election Commission, and the commission has directed the Crime Branch, Ahmedabad to carry out an investigation into the video. The complaint was filed by advocate Govind Parmar, a member of the Human Rights Law Network.

“The video clearly has a blatant communal tone and is an attempt to polarise the non-Muslim votes ahead of the election. The motive behind complaining is to ensure fair voting without an environment of fear or prejudice. The cyber cell of the crime branch has recorded my statement. I have stated that such videos should be banned, as they create fear and take advantage of polarisation. The cyber cell has written to all social media platforms to take down the video,” Parmar told The Wire.

“There is obviously the hidden agenda of Hindutva in the video, which doesn’t come from the BJP directly these days but from unofficial trusts and organisations affiliated to the Sangh parivar. This has been the case post-2012, from the time when Modi started to project himself as a national leader. He does not clearly highlight Hindutva, but it has been back-channelled. The video definitely is trying to set a communal mood, which will have a role in mainly consolidating urban votes,” Sharik Laliwala, a political researcher who has been studying various trends in the Gujarat elections since the 1960s, told The Wire.

“Such a video, just after the poster incident, does leave a mark on the psyche of a Muslim. To add to that, the Congress is trying to shed its ‘Muslims-appeasing’ image, so there is a sense of complete negligence during this election,” he said. “With no other option, less Muslims may come out to vote.”

Post-2014, there has been a phenomenon amongst the urban and rich Muslims, who have been less vested in electoral politics and more focused on building charitable institutions that would fund healthcare and education of Muslims. This is a trend observed post the ghettoisation of Gujarat, especially in areas like Juhapura, which have been grossly neglected. “Post-2014, the fear among Muslims has grown, also owing to the BJP’s decision to field Adityanath as the chief minister of Uttar Pradesh. Many Muslims who used to live in heterogeneous areas have either migrated to Juhapura or older Ahmedabad or bought a second home to be safe,” Laliwala added. The poster incident he refers to occurred in Paldi, where he lives. Posters were put up warning people not to let the area become Juhapura.

Also read: What Juhapura Tells Us About Being Muslim in Modi’s India

“This is the first election in Gujarat where nobody is talking about the Muslims voters. But at the same time, the BJP needs to bring the anti-Muslim agenda in to help them in the elections. First, the posters came up in Paldi. And now the video surfaces, which indirectly says people should fear the Muslims. What can these possibly mean? If the BJP loses, Paldi, a Hindu- and Jain-dominated area will become Juhapura – that’s what they are trying to instil in the psyche of people. A systematic process of instilling fear in non-Muslims can be clearly be seen,” says Shamshad Pathan, a prominent advocate and human rights activist associated with the Jan Sangharsh Manch, a civil rights organisation based in Ahmedabad.

Amidst the row over the video, a few posters have also come up in the Surat East constituency in south Gujarat and Vejalpur constituency in Ahmedabad stating: “Musalman ko ticket nahi, to Musalman ka vote nahi (If you don’t give tickets to Muslims, you won’t get the votes of Muslims)”.

The BJP has always dubbed the Congress a ‘Muslim party’ and evoked ‘Hindu pride’ as part of their election campaigning in Gujarat. In this election campaign, the Congress has distanced itself from Muslims and adopted a ‘soft Hindutva’ image to get back into the electoral game. Party vice president Rahul Gandhi has been seen visiting multiple temples along his Navsarjan yatra in Gujarat.

Many Muslim leaders in both the BJP and Congress were still hopeful of a ticket – but none of their parties has shown much interest. The number of Muslims MLAs in the Gujarat assembly has been steadily declining. In 1980, there were 12 Muslim MLAs, in 1985 there were eight, two in 1990, one in 1995, five in 2002, three in 2007 and two in 2012. The BJP has not fielded a single Muslim candidate in the state in assembly elections since 1995.

Muslims constitute 9.67% of Gujarat’s population, but the community is concentrated in about 20 constituencies, mostly urban.

“The Congress had included Muslims in its political polemics when they had come up with the strategy of consolidating KHAM (Kshatriya, Harijan, Adivasi and Muslims) votes. Since then, the BJP has always accused the Congress of appeasement politics. Post the riots [of 2002], the BJP came up as a party of Hindus and Modi came to be known as a Hindu hriday samrat. Since then, Muslims became marginalised not only socially, but also in terms of developmental factors like education and healthcare, rehabilitation etc. Thr Congress, as an opposition party, was not very active in taking up these issues of Muslims in all these years. Of late, as the BJP went all out in evoking ‘Hindu’ sentiments to consolidate votes, the Congress started behaving almost like the BJP in Gujarat. This soft Hindutva stand will distance the Muslims from the Congress and may also dent their vote bank,” Ahmedabad-based sociologist Gaurang Jani told The Wire.

Dissatisfaction with both parties

The dissatisfaction against Congress representatives amongst Muslims is palpable. In October this year, the Congress MLA from Dariyapur was garlanded with shoes in his own constituency.

Three days ago, about 500 Muslims in the Danilimda area of the Muslim-dominated Jamalpur-Khadia constituency in Ahmedabad joined the BJP in an event organised by sitting MLA Bhushan Bhatt, who has been re-nominated by the BJP.

In May this year, nearly 2,000 Congress workers, two sarpanchs and the vice president of the Congress minority cell, Mehmoodaben Sheikh, joined the BJP in the very first in a series of conventions organised by the minority cell of the BJP at Dahegam, Gandhinagar district. All of them were disgruntled due to the Congress’s apathetic behaviour towards Muslims.

“I do not see a future for the Congress in Gujarat anymore,” Sheikh had stated while joining the BJP after 21 years of association with the Congress.

“Even though the Congress has given tickets to a handful of Muslim candidates, the party has not done much for the community. The representatives have made a fortune and not the people of the area,” said M.K. Chisti, president of the BJP’s minority cell.

“The BJP, on the other hand, has a considerable number of candidates in civic elections, all whom have done good work. While the Congress minority cell remains defunct, we have been constantly campaigning for the party wherever there is a considerable Muslim population. In fact, the party is eyeing new seats in Ahmedabad, Vadodara and Surat rural, Navsari, Kheda, Valsad, Abdasa (Kutch), Amreli, Botad, Bhavnagar, Morbi and Junagadh, all where the Minority Cell has campaigned along with other leaders,” added Chisti.

The BJP, through its Sadbhavna Mission launched in 2011, tried to remake the party’s image and was successful in roping in the support of Shia groups and Dawoodi Vohras. Both Shias and Dawoodi Vohras are mostly businessmen and richer Muslims, and chose to be close to the party in power owing to the patronage they enjoyed and the posts they found in various boards and foundations.

However, activists feel the Muslims of Gujarat are increasingly feeling disillusioned by the politics and politicians of Gujarat, irrespective of party, primarily because of the failure to address their issues.

“The handful of Muslims who have sided with the BJP for patronage don’t represent the sentiments of the entire community,” said Mujaheed Nafees, who works for the development of Muslims through the Minority Coordination Committee, an organisation he formed in Gujarat.

“The political parties have narrowed the Muslims into a vote bank that is viewed with a religious angle only. This may be because the community has not produced a social leader either yet. If one looks at the issues, one would realise that basic issues of Muslims are education, livelihood and employability, the same as any other downtrodden section of the society,” he added.