Local Muslims in Himmatnagar believe that the Ram Navami processions, in which several people carried swords, had the intention to disrupt peace. 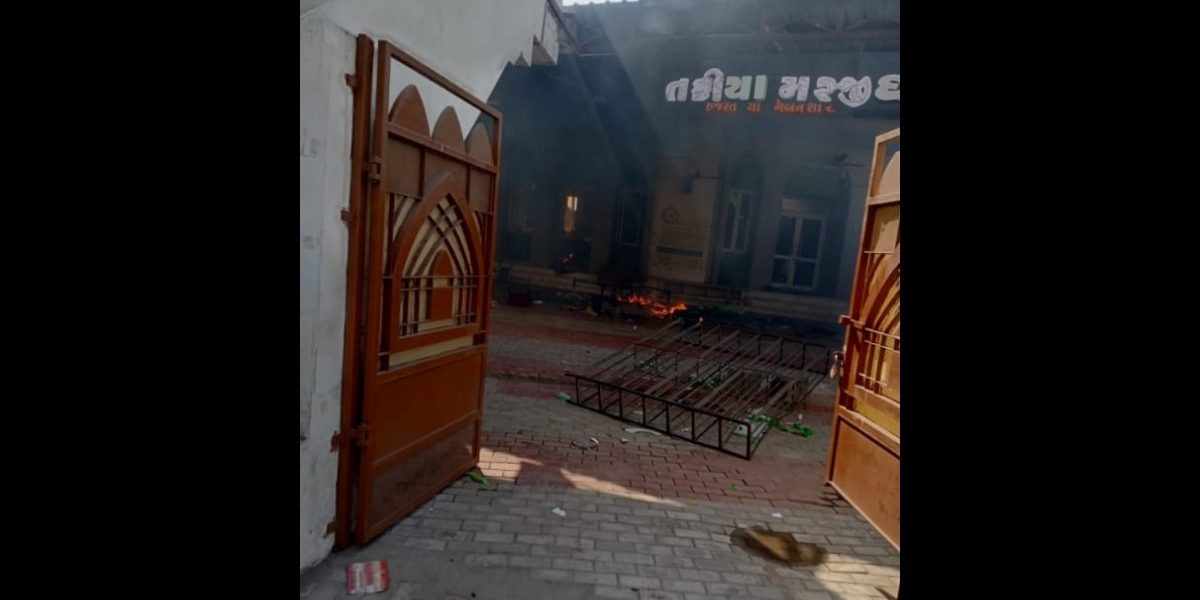 New Delhi: On April 10, several processions were taken out across India to celebrate Ram Navami. However, many of these processions and rallies made deliberate attempts to disrupt peace and communal harmony in neighbourhoods dominated by Muslims.

At 1 pm on Sunday, in Himmatnagar town of Sabarkantha district, north Gujarat, roughly 90 km away from Ahmedabad, some Hindus reportedly celebrated Ram Navami while wielding swords as a part of the procession. As the procession began to enter Ashraf Nagar, a Muslim-dominated area between two Hindu localities, Shakti Nagar and Mahavir Nagar, locals claimed that Hindu men allegedly engaged aggressively with local Muslims.

When Muslims watched the passing procession from their terraces, they told The Wire, slurs were reportedly exchanged and the Hindus accused the Muslims of mocking their festivities. This snowballed into a violent face-off, triggering further destruction in other parts of Himmatnagar. Violence was also reported from another town, Anand district’s Khambat.

After this, even as Himmatnagar’s ‘A division’ police initially did not allow another Ram Navami rally to take place, members of the Vishwa Hindu Parishad and Bajrang Dal forcefully led a rally into Muslim-dominated localities. Videos of the day circulating online show a group of 1,000-1,200 Hindus in this rally, encircled by the police. Later, as stone pelting and arson escalated the Police had to lob tear gas to disperse the crowd and Section 144 was imposed in the city barring gathering of more than three people at a place.

To mitigate and combat the violence and vandalism, three companies of State Reserve Police (SRP) and local police forces from Ahmedabad, Aravalli, Anand and Mehsana were rushed to Himmatnagar on orders from Ashish Bhatia, the Director General of Police, Gujarat (DGP).  In the evening, locals say and videos show stones being pelted and fire crackers thrown on police personnel, injuring at least three police personnel in Himmatnagar. 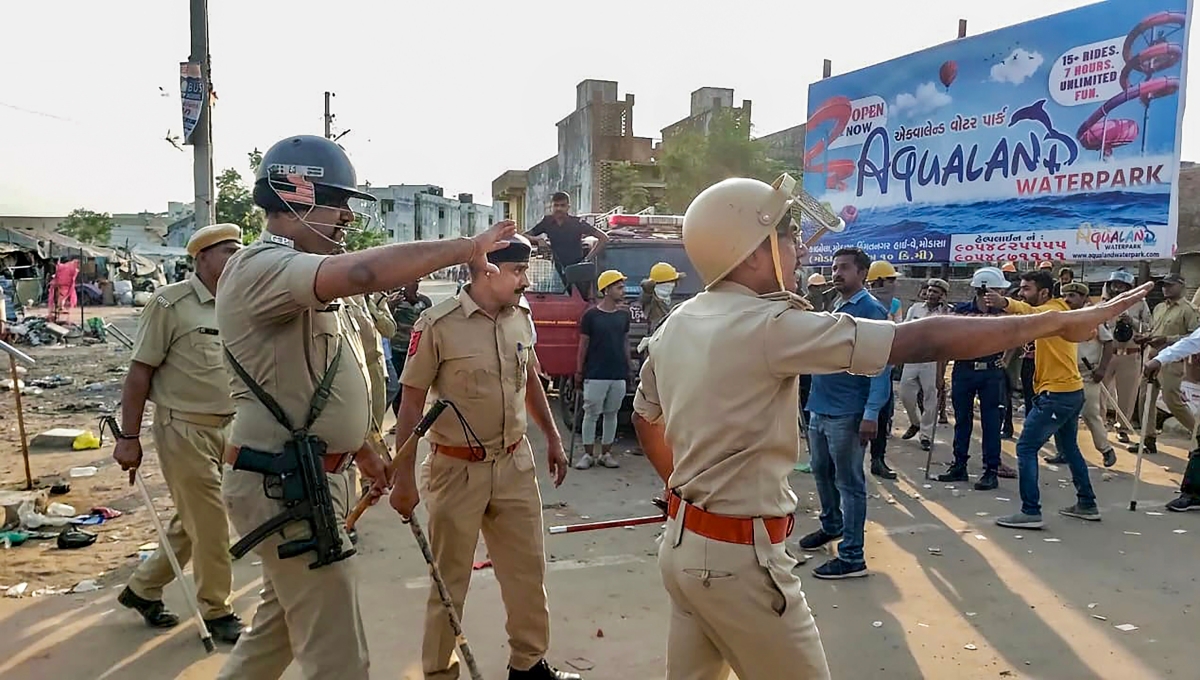 While incidents of burning vehicles, stone pelting and vandalism of homes and businesses have been widely reported, Himmatnagar locals that The Wire spoke to have not only corroborated the videos but also talked about what they believe was a strategic attempt to disrupt peace.

When they saw that people in the procession were carrying swords, local Muslims reportedly sounded an alert within the community.

Ahmed, who lives in the Muslim-dominated Ashraf Nagar area, said that he saw a sea of saffron flags marching in their direction. “They came prepared, the police was right beside them. The way they were marching towards our area, knowing that it is Muslim majority, we got a hint of what their plans might be,” said Ahmed.

Seeing the marching men, many like Ahmed locked their doors and windows, so their houses would look empty. Others, however, refused to hide and decided to retaliate against the perceived provocation.

Fareed, 19, was among those out on the road during the procession. He paid a price for this; he suffered a blow on the back of his head during the violence, and is currently admitted in Ahmedabad Civil Hospital. Fareed’s uncle, Saleem Sheikh said, “Fareed was out for barely five minutes, he did not indulge in any violence and yet he was hit by a stone, he has suffered internal bleeding and is not conscious even as of today”.

Later in the evening, locals saw at least 25 Muslim men being taken away by the ‘A division’ Police.

Ghaffar, a resident of Mali Ki Chaparia, told The Wire, “They had a plan, they burnt Muslim shops, mosques and even set not one but many dargahs on fire. I saw a man with a saffron scarf yelling ‘Jai Shri Ram’ while he was hurling stones at the mosque I go to; he wore an orange scarf with ‘Om’ written on it.”

“Yeh konsi ibadat hai? (What kind of prayer is this)?” he asked.

Locals who did not wish to be named shared a few observations about the incident. They pointed towards the nature, intensity and spread of the violence. Across India, during Navratri, demands emerged for various bans on activities that hold relevance in Islam or are connected to Muslims. In Gujarat, they believe, this extended to a planned attempt to exert dominance over Muslims on Ram Navami.

The Vishwa Hindu Parishad and Bajrang Dal circulated social media content to invite Hindus to such processions. One such poster that The Wire had access to said, “Jai Hindurashtra” and “Aao Mil kar kare Ram Rajya ka Nirmaan” in Gujarati, with a photo of the deity Ram at the centre. 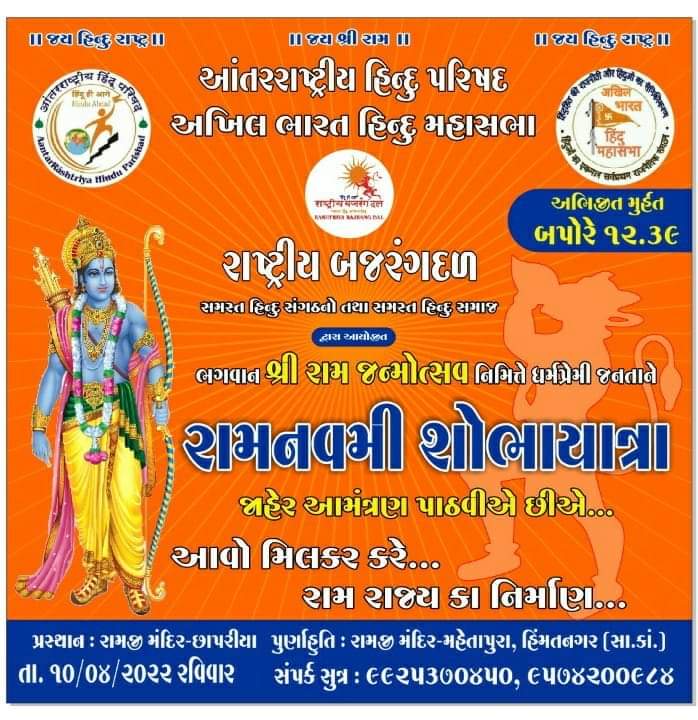 Poster for the Ram Navami procession.

Such posters and the cadre of these organisations mobilised large masses of Hindus to join in what they called the ‘Ram Navami Shobha Yatra’.

Hozefa Ujjaini, a social activist, said that the violence on Sunday in Himmatnagar and Khambat were based on the pattern shown in Rajasthan’s Karauli, where Muslim houses were set ablaze. He recalled how on Holi, Muslims in Sandheli, a village 100 km away from Himmatnagar, saw harassment, violence and anti-Muslim slogans.

Ujjaini, under the aegis of the Nagrik Adhikar Manch Gujarat (NAMG), an Ahmedabad-based rights organisation, wrote to the Gujarat director general police urging them to heighten security and initiate action against the culprits. However, the DGP is yet to respond to the letter, The Wire has learnt.

The letter by NAMG calls for action against rioters who in the garb of religious processions attempt to fan communal enmity in Gujarat. It also calls for a region-wide check of CCTVs so that those caught carrying weapons without permission can be booked and arrested.

Ujjaini also said that it should be made public which official granted the VHP and Bajrang Dal cadre to carry out a series of processions with swords, which later enabled them to provoke local Muslims and disturb public order.

In and around Himmatnagar, locals told The Wire that vicinities such as Ashraf Nagar, Bagicha Vistar, Chaparia, Shaktinagar, Motipura Vistar, Hassan Nagar and Mali Ki Chaparia saw Muslim houses, shops and places of worship like dargahs and mosques being drizzled with kerosene, looted and desecrated as Ramzan completed nine days. In these areas, two houses, the Dargah of Zorawar Baba, the Dargah of Gebanshah Peer and its adjoining mosque, a dozen cars, Muslim-owned tyre, grocery, and mobile shops, bike showrooms, the Dargah of Gulab Shah Peer, the Hassan Fareed dargah and 13 dargahs near Himmatnagar’s Hathmati river were allegedly burnt, vandalised and desecrated, all in a matter of eight hours.

On April 11, a high-level meeting was called by state home minister Harsh Sanghavi with the DGP and several SP-grade officers. Briefing the press about the incidents in Khambat, Anand, Ajit Raijan, Superintendent of Police, Anand, told the press , “Heated arguments between two communities resulted in a clash within seconds. But the situation is in control as of now.”

Taking stock of the situation, IG Abhay Chudasama, also said that the situation in Himmatnagar was under control. The IG said that a total of three FIRs have been registered in relation to clashes. He said, “The situation is under control now. Over 30 people have been detained till now. We have a lot of CCTV footage. Several teams of police are investigating the matter to nab the culprits. One FIR has been registered for attack on cops, the second FIR for attacking religious places and the third for arson.”

Despite assurances of calm and control over the situation, a few Muslims in Himmatnagar have been leaving localities close to Hindu-dominated areas, to flee to Muslim localities for safety. Incidents of violence in Gujarat’s Dwarka and Bardoli have also been reported, where Ram Navami rallies were planned right outside mosques. Most of the places that witnessed violence are areas where the Congress party is relatively stronger.

In the 2017 assembly polls, the BJP had won the Himmatnagar and Khambhat seats by less than 2,000 votes.

The proximity of the incident to Ram Navami, Ramzan and the Vidhan Sabha polls, which are only seven months away, points towards the politics of polarisation, as religion-based mobilisation take centre-stage in Gujarat yet again.