Sitamarhi has a long history of electing Muslim representatives. So why is nobody standing up for them now? 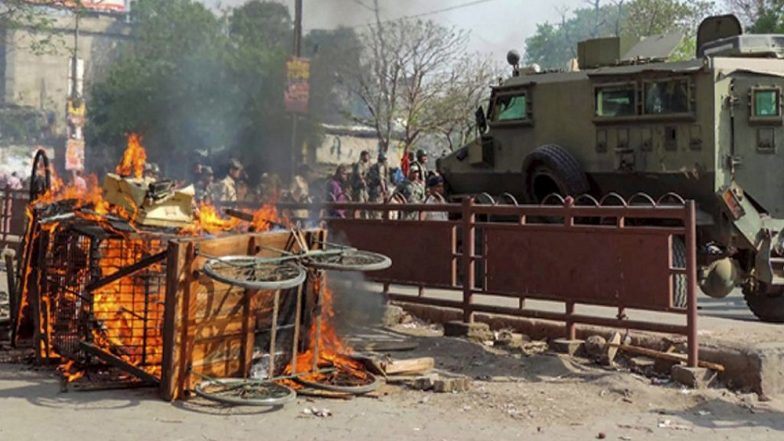 On October 20, Sitamarhi in northern Bihar burned once again. Just as in October 1992, it began with a procession on Durga Puja, driven through the town’s Muslim localities.

Traditionally, the many akharas in Sitamarhi organise their own processions to immerse Durga idols, taking different routes through the town. On the evening of October 19, the Madhuban akhara set out, armed and already shouting incendiary, anti-Muslim slogans. A rumour spread: That Muslims were pelting stones near the Nonia toli, along the procession route.

Locals allege that the district administration did nothing to counter the false propaganda. The rumour gained traction by 11 am the next morning, when another akhara took out its procession. It was joined by a larger crowd, angry and charged; the situation was visibly explosive. Members of the procession allegedly began looting Muslims homes and then setting them on fire; they also stole goats, a recent trend in anti-Muslim violence in rural Bihar. The violence, arson and loot continued from 11 am to 3 pm on October 20.

Seventy-year-old Zainul Haq Ansari, who had visited his daughter at Rajopatti, was returning to his village, Bhoraha, when he went missing. His family registered an FIR. Two days later they were informed of a dead body in the Muzaffarpur Sadar Hospital. It was burnt beyond recognition. Only when internet was restored by the district administration, and a video of a mob attacking Ansari went viral, could they identify his dead body.

The video was uploaded by Millat Times, a vernacular portal based in Patna. Patna police served a notice to the website for circulating the video. Muzaffarpur police forced Ansari’s relatives to bury him in Muzaffarpur itself, rather than taking him back to his native village. Only the outrage that followed forced Sitamarhi police to begin arresting suspects. 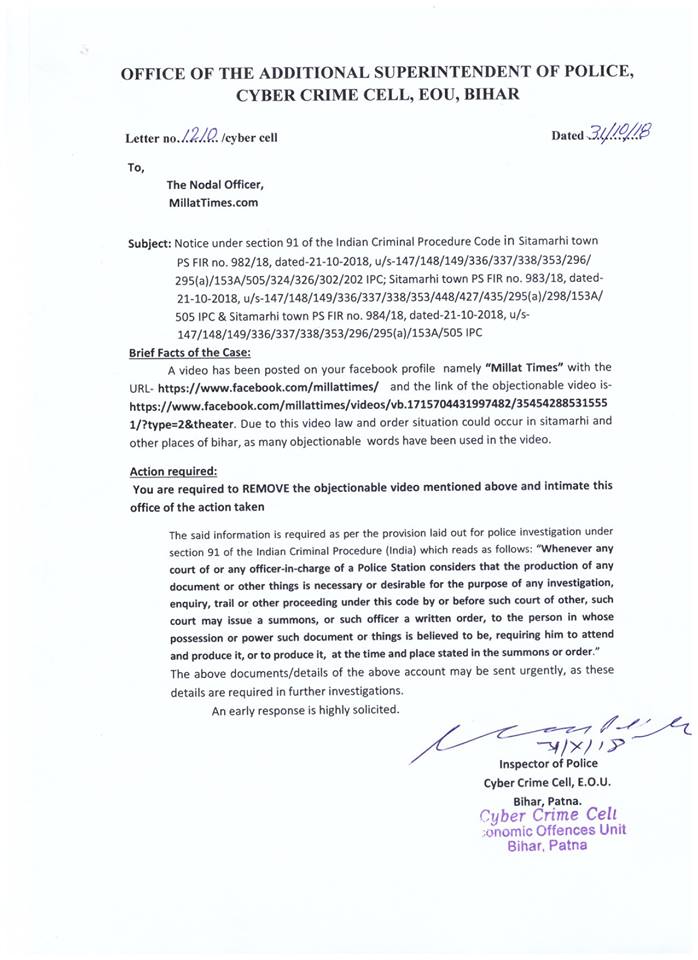 Sitamarhi has a long history of electing Muslim representatives to the Bihar assembly and Lok Sabha. In my earlier columns, I argued that the parts of Bihar that elect Muslims have now been targeted with violence.

From the start of this year, a series of communal attacks have taken place across Bihar. In Bhagalpur, it began on March 17, 2018 with an incendiary procession led by Arijit Shashwat, son of Union minister Ashwini Chaubey. In February, RSS chief Mohan Bhagwat had camped at Muzaffarpur – his visit there made headlines when he said the RSS could mobilise more efficiently than the Indian Army.

Adding insult to injury, K.S. Dwivedi, the superintendent of police during the Bhagalpur killings of 1989, was elevated to DGP of Bihar this March. Nitish Kumar’s administration seems to have lost control of the state machinery.

Amidst media blackout, activists cry out

Some activists in Sitamarhi are now raising their voices on social media and the vernacular media. Tanwir Alam asked why Vikas Burman, the SP of Sitamarhi, was trusted with tackling a communal situation, when he had failed miserably in controlling two waves of violence in Nawada, in 2017 and in March 2018.

The MP of Nawada is the firebrand Bhumihar leader and cabinet minister Giriraj Singh. Meanwhile, two Yadav leaders, with the Janata Dal (United) and Rashtriya Janata Dal respectively, clash and compete to keep Muslim flocks behind them. Locals allege that even family members of Salman Raghib, a JDU MLC, have suffered from police brutality – and that Raghib has maintained silence to save his seat and not embarrass his leader, Nitish Kumar.

Shams Shahnawaz, an aspirant for an assembly seat in Sitamarhi, has asked the National Commission for Minorities to investigate. He said mere compensation to the family of Zainul Haq Ansari will not do; the killers must be brought to justice.

The political untouchability of Muslims

What is more surprising is that the opposition leader, Tejaswi Yadav, has still not spoken out – or even tweeted. His silence testifies to the political untouchability of Muslims in the face of the Hindutva onslaught.

Tejaswi’s RJD is considered the most consistently Muslim-friendly party: In October 1992, when Lalu Prasad was chief minister, he had personally camped in Sitamarhi to control a communal outbreak. He also famously said that if ten Yadavas had to sacrifice their lives to save just one Muslim, they must do it, if they want to see a Yadav continue as the chief minister.

For the next two decades, Bihar saw comparatively little communal violence. Lalu did falter in booking the culprits of the Sitamarhi attacks in 1992 and the Bhagalpur violence of 1989-90. He announced an inquiry into the former, but it remained merely an announcement. The Lalu-Rabri regime also failed to tackle crime, kidnappings and anti-Dalit violence, but it did succeed in preventing communal violence.

Its electoral arithmetic, popularly summarised as M-Y, still provides a rock-solid support base to the RJD. In a number of assembly constituencies, the M-Y proportion is estimated to be 40-70%. Tejaswi ignoring the Sitamarhi violence is intriguing indeed.

The Congress, though a marginal force in Bihar – and still seen as competing with the JD(U) for Bhumihar and Brahmin votes – has been equally nonchalant. Questions have been about the Congress going easy on Anand Shankar, its leader in Aurangabad, who is accused of leading the mob in March this year. Shakti Singh Gohil, the party’s in-charge for Bihar, started an inquiry into the charges against Shankar. The report is still due, and Shankar remains in the party.

The Imarat-e-Shariah – founded in 1921, and with a proud history of opposing the Muslim League’s separatist politics – has always led relief work among victims of violence. They too are now accused of staying silent about recent violence. On October 30, a functionary of the Imarat visited Sitamarhi, but without any legal experts or activists equipped to prepare a sound and credible fact-finding report.

On April 15 this year, Khalid Anwar, a close associate of the chief of the Imarat, Wali Rahmani, and convenor of the ‘Deen Bachao, Desh Bachao’ rally, was nominated by the JD(U) to the Vidhan Parishad, exposing the Rahmani-Nitish nexus, if it was a secret at all. A picture emerges of the Imarat now aligned with the NDA, unwilling to embarrass Nitish Kumar, and like too many others, unwilling to speaking out on the deepening violence.

Mohammad Sajjad is the author of Muslim Politics in Bihar: Changing Contours. He tweets @sajjadhist