Community activists and family members believe a deliberate attempt is being made to muddy the waters and shift the entire blame for Rakbar Khan's murder on to the police, thus letting the 'gau rakshaks' off the hook. 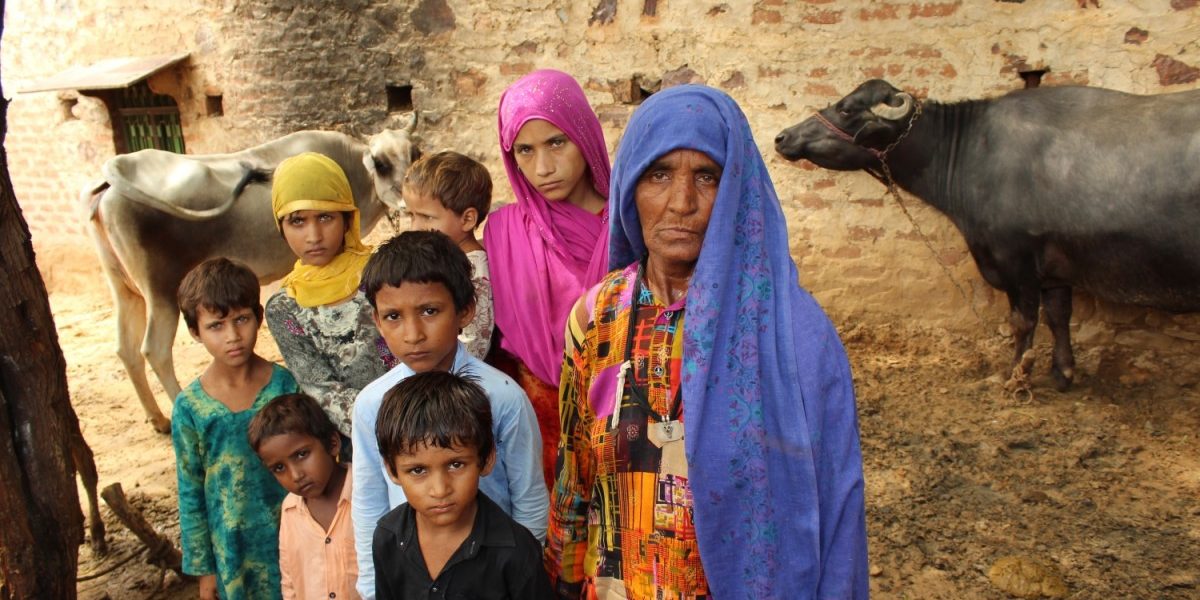 Kolgaon, Haryana: Amidst the shifting narrative surrounding the murder of Rakbar Khan – the 28-year-old dairy farmer whose killing on Saturday makes him the third Muslim to meet a violent end in the Alwar region of Rajasthan in 15 months – this much is indisputable: he and his friend Aslam Khan were brutally attacked by an angry mob of gau rakshaks who had been brought to the spot by villagers worried about men trespassing through their fields in the dark with cows.

The assumption in the Lalawandi area was that the men were Muslims, that they were ‘smugglers’, and that the cows were being transported in order to be slaughtered for meat. In the charged atmosphere that has gripped this district barely 125 kilometres from Delhi, these assumptions – and the arrival of activists connected to the Vishwa Hindu Parishad – were tantamount to a death sentence. And that is what was handed down to Rakbar, say family members and social activists, even if the precise sequence of events leading to his eventual demise remains a matter of dispute – or deliberate obfuscation.

Speaking to The Wire, farm owners in Lalawandi said that they had informed the gau rakshak activists that for quite a few days, some men had been trespassing through their fields at night with cows. The farmers were convinced the men were cattle smugglers. 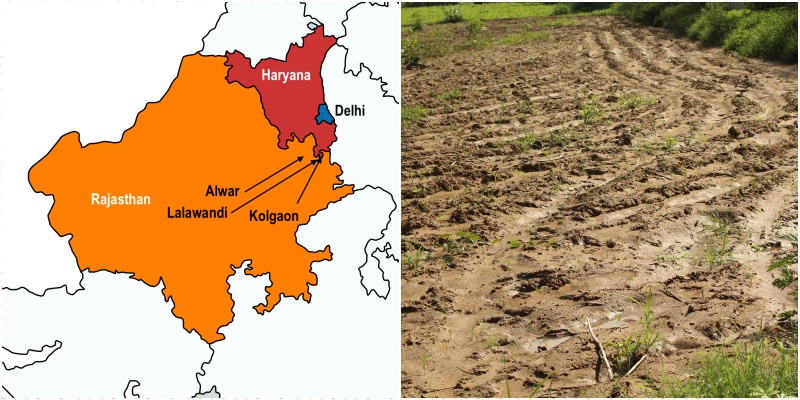 “It was the fourth time in the last 14 days that these men were taking cows through this shortcut to their village. They would choose a time to cross our fields when there would be the least chance of anybody being present. For the past few days, we had noticed the footprints of men and cows in our fields but we couldn’t dare to stop them single-handedly,” Gaj Raj Yadav, one of the local land owners where the incident took place said. “So we informed some local men who claimed to be working for gau raksha about this problem. Our farms are the last spot where these smugglers could be caught. Beyond these, the Mohammedan area starts.” There, he alleged, “they openly sell beef and you cannot question anybody.”

The gau rakhsa activists were then summoned and lay in waiting, presumably to ensure the ‘Mohammedans’ were caught before they entered their own area. Rakbar, who had bought two cows from the neighbouring village of Khanpur and was walking them home to Kolgaon along with Aslam, had no inkling of the mob that lay in wait for him.

“When the next night [Rakbar] was taking his cows through our farms, these men grabbed him and thrashed him. He was alive until the police were informed about the smuggling. When the police reached the spot, he himself sat in the jeep but was later found dead,” said Yadav. Aslam managed to escape and made his way back to Kolgaon in the morning. 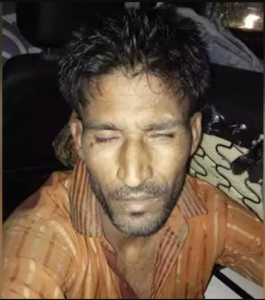 Photograph of Rakbar Khan, shared with the media by VHP activist Nawal Kishore.

The fact that Rakbar was alive when the police took him away has now become grounds for the cow protection activists to assert their own innocence and pin the entire blame for his murder on the police.

Naval Kishore Sharma, chief of the Vishwa Hindu Parishad’s gau raksha cell in Ramgarh, was the man who informed the police about the incident. He later narrated how the clothes of the muddied Rakbar were changed with the locals’ help. He also circulated a photograph of the victim seated in a police vehicle as proof that he was not just alive but well enough to sit up.

Though Naval Kishore refused to comment, other media reports cite him saying Rakbar was taken to the local police station for a while before being brought to hospital only at 4 am.

The police deny Rakbar was brought to the police station or that they washed the mud off him and changed his clothes, a claim made by witnesses to the Indian Express. But they do admit they took time sending the two cows that he had been transporting to a gaushala before attending to Rakbar’s treatment. 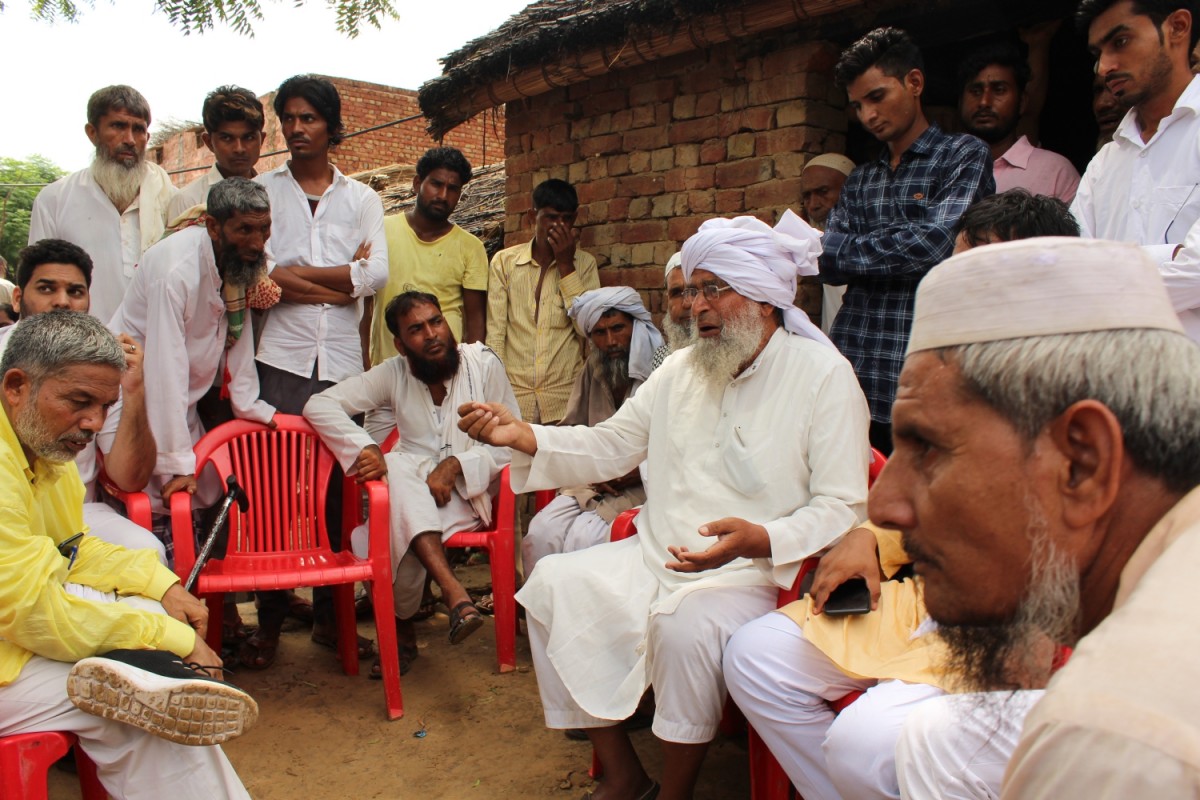 Subhash Chandra, sub-inspector, Ramgarh police station told The Wire, “At around 12:45 am, we received a call from a person named Naval Kishore stating that a cow smuggler has been found in the Lalawandi area. Some time later, the same person came to the police station on a bike and directed us to the spot. We took him [Rakbar Khan] to the hospital at 4:00 am. Meanwhile, we were arranging for a vehicle to transport the cows to the Jain Sudha Sagar Gaushala situated about six kilometres from the station. Later, Mohan Singh, assistant sub-inspector, himself filed an FIR under section 143 (unlawful assembly), 341 (wrongful restraint), 323 (voluntarily causing hurt), 302 (murder), 34 (acts done by several persons in furtherance of common intention).”

“We took [Rakbar] to the hospital directly from Lalawandi. He wasn’t brought to the station so there isn’t any chance of us changing his clothes. Those who are making such stories in our name are free to do so,” he added. 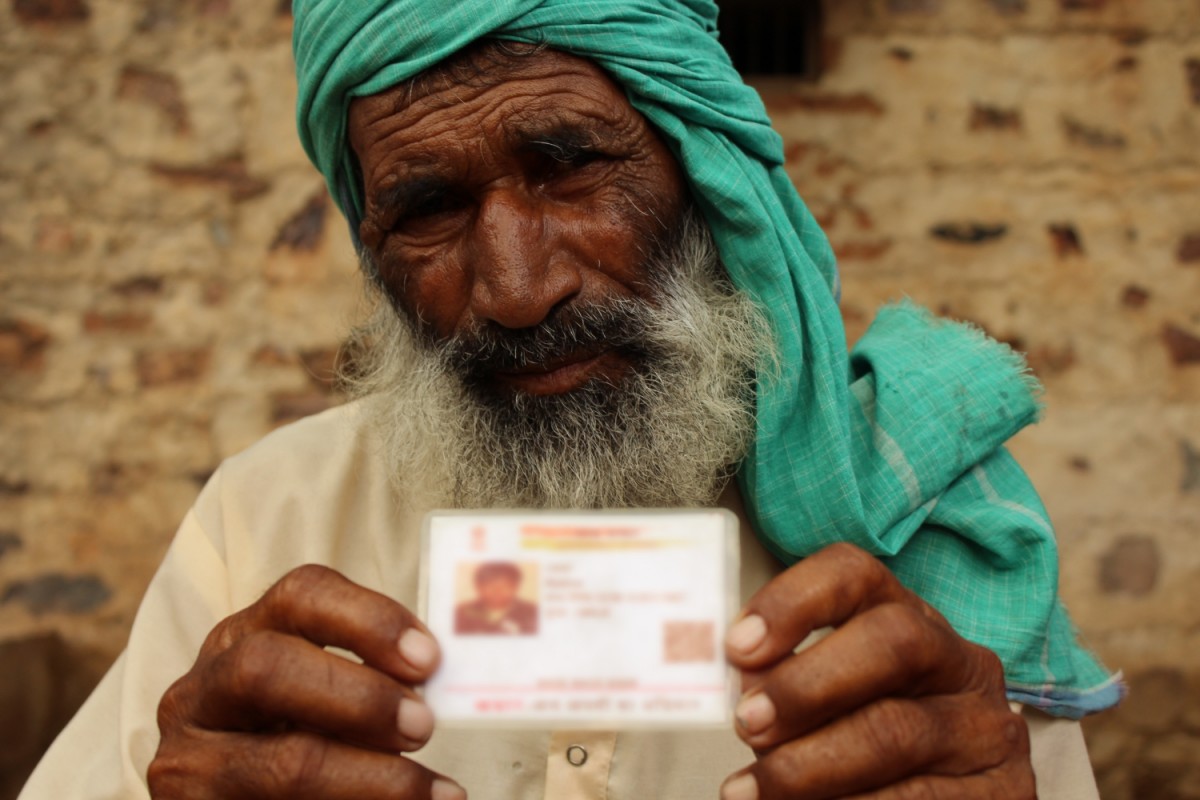 Whatever the truth about the delay, by the time Rakbar was taken to the Ramgarh Community Health Centre (CHC), he was already dead. CHC in-charge, Dr Hasan Ali Khan said, “Rakbar was dead when the police brought him to the CHC at 4:00 am. When I asked for a post-mortem, the police said it would be done in Alwar.” The doctor said Rakbar’s clothes were dry, which suggests they had perhaps been changed.

Rakbar’s family was informed about his death in the morning. “We were told at 7:30 am in the morning, when the sarpanch received a call from Ramgarh police station stating that Rakbar has expired. While leaving home, he had told us that he was going to Khansar to bring a cow back,” said Harun Khan, Rakbar’s cousin brother.

“When we took Rakbar for the ritual bath before his funeral, we saw that his legs, hands and neck bones were broken in three or four placed. They beat him so badly and left him to die.”

Aslam, who managed to escape when he and Rakbar were attacked, gave his statement to the police but was not in the village when this reporter visited. “He is still very terrified. He is felling guilty that he left Rakbar alone there to die and doesn’t speak much. He has gone to his relative’s village for some days,” said Umar Mohammad, brother-in-law of Rakbar. However, the Tribune met up with Aslam in Gurgaon, where he alleged the attackers said they had the support of the local BJP MLA, Gyan Dev Ahuja.

Local activists and community leaders believe that reports of a delay in taking Rakbar to hospital have been put out to complicate the clear fact that local goons under the cover of ‘cow protection’ killed Rakbar. 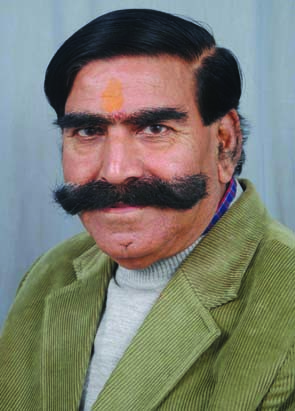 “The murderers are trying to shift the entire blame for their crime on to the police so they can roam scot free. However, the reality is that they first attacked him, then called the police. After having seen the investigations in past lynching cases, we are sure that this time too the murderers would be given a clean chit. When the MLA Gyan Dev Ahuja openly supports the mob, then what sort of justice are we supposed to expect?” said Maulana Hanif, chief imam of Alwar.

They said that while the police might well be a party to the crime, the fact that Rakbar was lynched by a mob can’t be ignored.

“The story the Vishwa Hindu Parishad people have planted about the time lapse by the police is just meant to complicate the investigation,” Sher Mohammad, Alwar’s Meo panchayat chief, told The Wire.

Rakbar Khan is survived by seven young children, a widow and parents in their 70s.

Blaming what it said was an ‘error in judgment’, the Rajasthan police on Monday suspended the policeman who delayed taking the injured Rakbar to the community health centre for treatment. 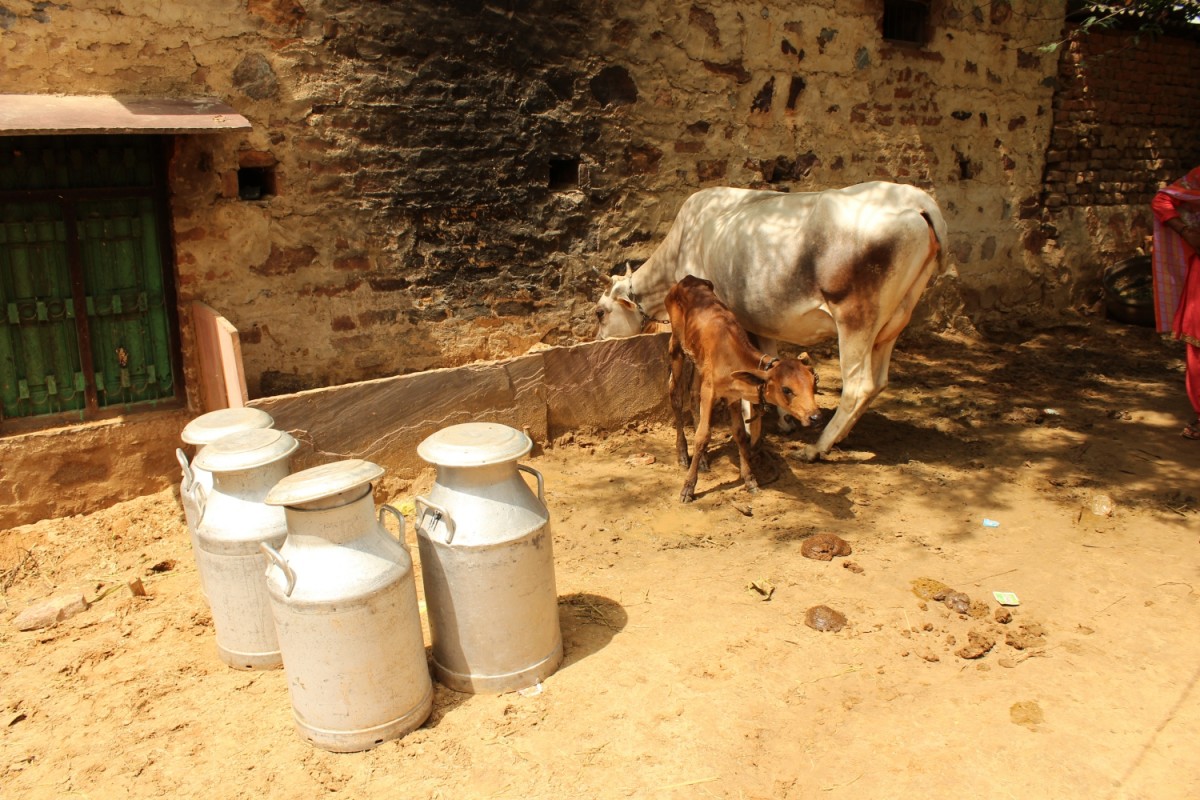 Speaking to The Wire, Rajendra Singh, superintendent of police, Alwar said, “Lapses were found in the preliminary investigation conducted by the Ramgarh police. The in-charge of Ramgarh police station, Mohan Singh has been suspended for not taking the injured immediately to the hospital and four constables have been sent to police lines (line haazir). The investigation has also been handed over to Vandana Bhati, additional superintendent of police, crime and vigilance, Jaipur range.”

Two persons have been arrested so far in connection with the case.

Note: The story has been edited to add Aslam Khan’s quotes, given in an interview to the Tribune.