After marches held by Muslim and Hindu groups, the atmosphere has become communally charged.

Amravati (Maharashtra): Pockets of Amravati, a sleepy town about 150 kilometres from Nagpur, were marked by mob violence on Saturday, November 13. A Hindu temple, a dargah, shops, public properties, among others came under attack. A few shops and vehicles were also torched. Currently, the town is under curfew, and Section 144 (prohibition on a gathering of four or more people in the concerned area) of the Code of Criminal Procedure (CrPC) has been imposed for four days.

The pre-cursor to the violence was a call given by the local BJP unit for a bandh on Saturday. Following the call, hundreds of Hindutva workers gathered at Rajkamal Chowk – a key city square – to register their anger against the violence that had taken place a day earlier, on Friday, during a protest march by members of the Muslim community.

On Friday, a 35,000 strong crowd, primarily comprised of Muslims, had set out on a march in the heart of the city protesting the anti-Muslim violence that had taken place in Tripura and the alleged desecration of Muslim religious structures – an allegation that the state’s police has denied. The march had turned violent as some protestors allegedly stormed and attacked local shops. 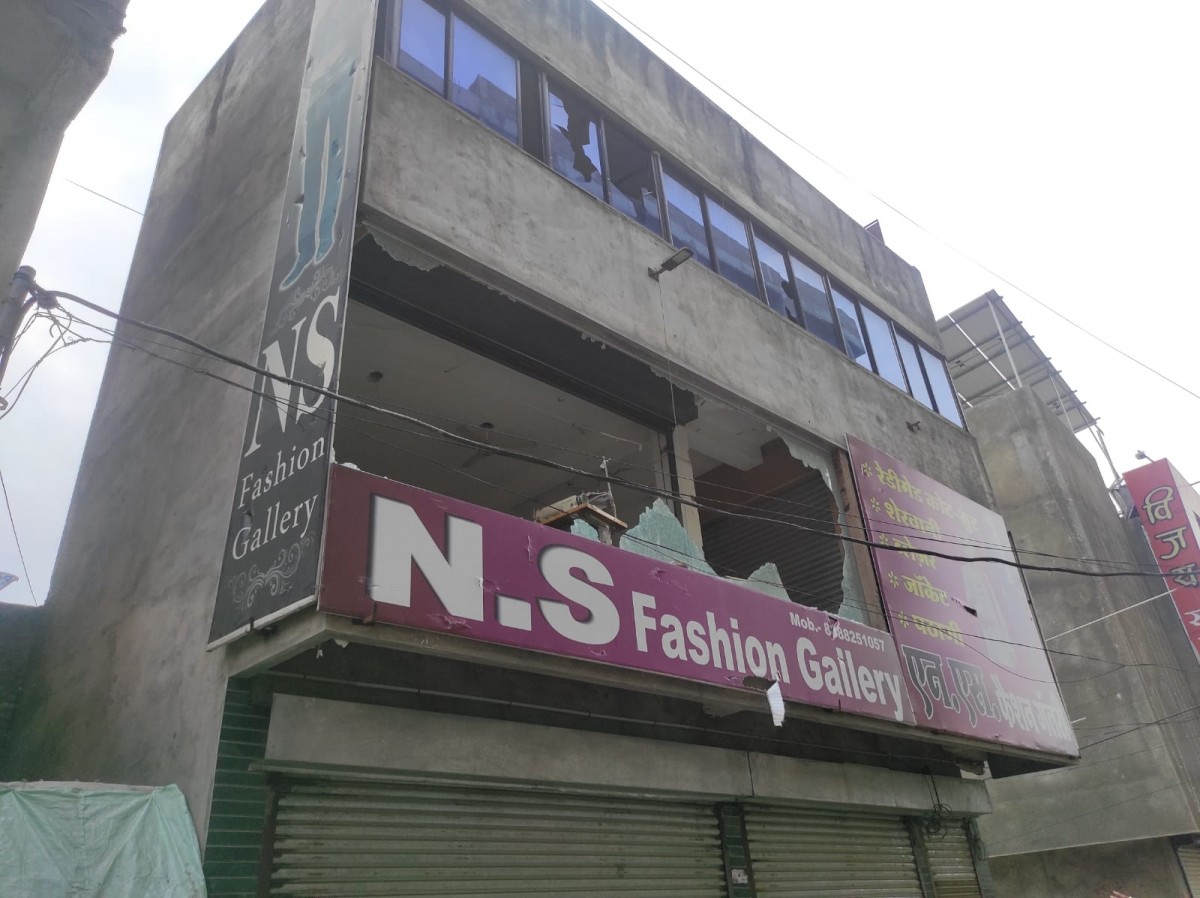 A commercial building in Amravati, Maharashtra, was vandalised during the violence on November 13, 2021. Photo: Kaushal Shroff

A video of a Muslim mob storming stores run by Hindus had spread like wildfire on the local WhatsApp groups. Another video depicted the mob ransacking an edible oil shop belonging to a Hindu owner. A provision store belonging to one Jagdish Gupta, a former BJP leader, was also attacked. The videos and the attacks on shops owned by Hindus enraged the local Hindu community.

This anger spilled out onto the streets in the town’s main square on Saturday, and a dargah nearby was attacked by Hindutva workers. Various accounts say that the dargah was attacked around 11 to 11:30 am on Saturday.

The crowds on the Hindu side, who started gathering by 9 am on Saturday, started pushing into the interiors of the city, zeroing in on Muslim-majority areas, including Sabanpura, Chandni Chowk and Gawlipura. Stone pelting was also reported from Namuna Galli, which has a sizeable Muslim population.

According to Md. Shahbaaz, a 27-year-old cigarette stall owner whose shop next to the dargah stands destroyed, a Hindutva mob brought in crowbars and other tools to destroy the dargah. The attack continued for about an hour and a half, he said.

Shahbaaz, for his part, has suffered a loss amounting to Rs 30,000, with items in his shop stolen. His stall is now a wreck with drawers, wooden shelves and lights undone.

He recalled that the stone pelting from Namuna Gully started once the Hindutva mob descended on the dargah. The dargah is opposite Namuna Gully.

Meanwhile, residents in Gawlipura and Chandni Chowk, other focal points of violence, said that Muslims from across Amravati made their way to Chandni Chowk based on “WhatsApp rumours” and fears that a strong Hindu mob was ready to destroy their neighbourhoods and the dargah in Itwara, another Muslim-dominated area.

In the last three days, Malegaon, Nanded and Amravati have emerged as the epicentres of a new wave of violence that rocked the state. The situation in the state has become tense and communally charged after marches by the Muslim community to protest violence in Tripura. These protest marches themselves turned violent, resulting in a crackdown by the police.

On Saturday, around 2:30 pm, stone pelting was reported from the lanes connecting Chandini Chowk (a Muslim-majority colony) and Sakkar Saath (a Hindu-majority area). The Shani Mandir in Sakkar Saath was also attacked. While eyewitnesses said the Hindu temple was attacked by Muslim mobs, a policeman said that damage was done during “intermittent stone-pelting”. 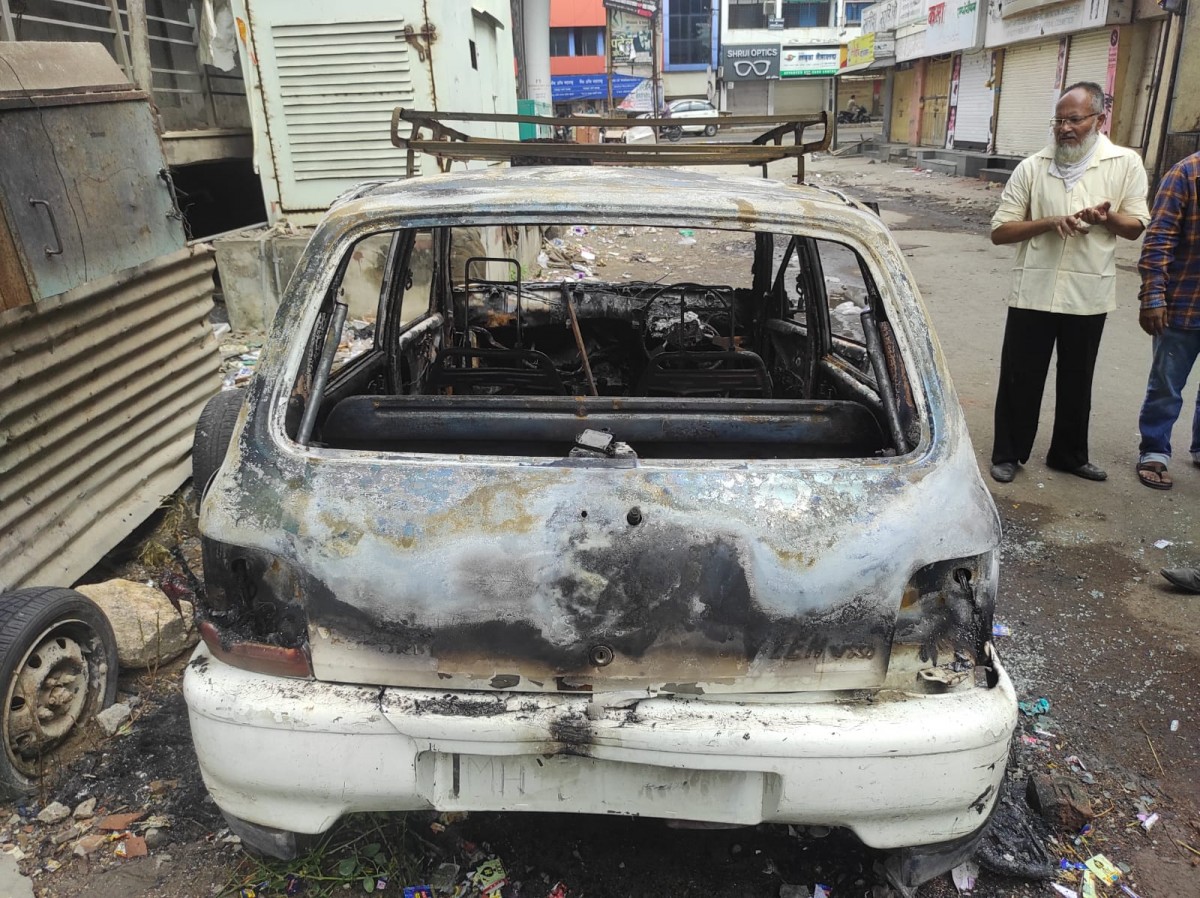 A car after it was torched during riots in Amravati, Maharashtra, November 13, 2021. Photo: Kaushal Shroff

By 2:45 pm, a mob numbering thousands and comprised of Muslims had assembled at the Chandni Chowk boundary. The mob – which this reporter witnessed – waved swords, staffs and axes, and stone-pelting took place with some regularity. Chants of “Naara-e-takbeer hai, Allah hu Akbar” rent the air. In the middle of the stand-off, police held negotiations.

Senior police officials attempted in vain to push the mob back, cajoling them, attempting to convince them to go back. The mob was especially angry with anyone wielding a camera or a mobile camera. When this reporter continued to record despite the mob’s threats, stone pelters charged at him, forcing him to run for cover.

Every time a volley of stone-pelting started, the police retreated, waiting until there was respite to fire tear gas shells and open fire in the air to disperse the violent crowd. Many on the Muslim side alleged that the police sided with the Hindus and did nothing.

Meanwhile, on the Hindu side, an assortment of young boys and middle-aged men went about invoking Hindu pride, asking people to step out of their houses to fight for the community.

Twice between 2:30 pm and 4:30 pm, this reporter saw groups of young men surrounding a constable. Their calls to the young people who were among the mob, in Marathi, were on the lines of “those Muslims have swords and guns and axes, and you [the Hindus] have nothing but sticks. When they fight, they are ready to die, but you guys want to go hide in your holes even at such times. Go out there and get some swords and ask others to come out and fight”. This reporter was at the scene as such provocative calls were made.

However, amidst the horror, there were also a few glimmering moments of sanity and humanity. By 3  pm, the Hindu mob turned its attention to a small shop by the name of ‘Aman Traders’ that belonged to a Muslim man named Sarfaraz Topli in the Sakkar Saath area. Young boys pelted massive bricks at the locks to break open the shop as cries of ‘Jai Shree Ram’ echoed in the air. A Hindu resident living upstairs ran to the scene, identifying the shop as his own, which calmed the mob. In a minute or two, police turned up there and shooed them away.

On being asked Ritesh Banarse, the Hindu resident who stepped in to save the shop, said, “Hindus, Muslims are all part of the business community here. We interact with them on a regular basis. We share business ties with them. Those boys who were pelting stones at the shop were from other colonies. How could I let them do this? How could I let them get away with something like this? I have to show my face to Sarfaraz every day. I could not stand by and see his shop being destroyed.”

By 3:30 pm, police gained an edge over the situation and mounted a strong attack and dispersed the violent mobs.