Ground Reality: Inside Rasana, the Village That Witnessed the Kathua Horror

“This year, all the [Bakarwal] families migrated earlier than usual due to the fear created by the rape and murder. The intention was to drive us away and they have succeeded." 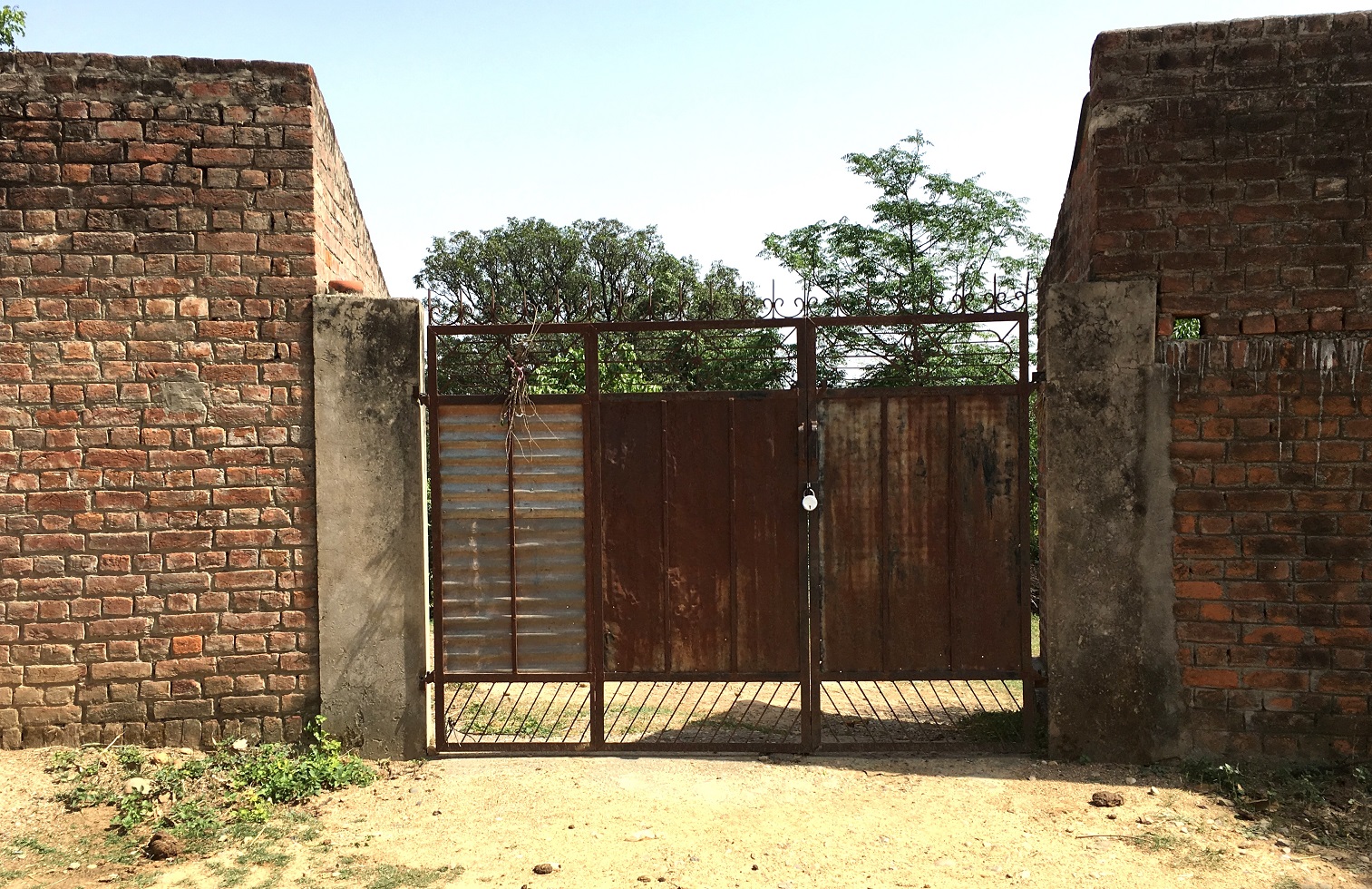 Bakarwal families have locked their homes and migrated earlier than usual this year because of the brutal rape and murder of an eight-year -old girl from their community. Credit: Kabir Agarwal

Rasana/Kathua: On National Highway 44 that extends across the length of India from Srinagar to Kanyakumari, about 50 kilometres south of Jammu, an easy-to-miss left turn leads to Rasana — the village where an 8-year-old Bakarwal girl was raped and murdered in January, the brutality of which has evoked global outrage.

The road is narrow, lonely and bumpy with at least knee-high grass on both sides. About 1.5 kilometres in, outside a temple, a policeman stopped our car and asked, “Where are you going?” I responded, “Rasana”. “Oh! Jahan kaand hua hai (Oh! Where the scandal has happened)”. The policeman noted down my name and phone number in a notebook and told us to proceed straight and that we would reach Rasana in two minutes.

Rasana is a small village of about 25 households, most of which are located in a tiny lane. As I walked through the lane, it was deathly quiet. The only noise came from a few chirpy birds. Most of the houses were locked. The devisthan at Rasana. (Right) The locked doors of the devisthan. Credit: Kabir Agarwal

The ‘devisthan’ is a small building painted pink in the middle of a barren piece of land with no sign of habitation around it. Several flags — saffron, red and white — are kept next to a large tree on one side, the three doors to the devisthan are all locked.

Further ahead, about a kilometre away, is the house where the victim lived with her adopted parents. It is a desolate house located on top of a small hill in the middle of a jungle about 1.5 kilometres from Rasana and 2 kilometres from Kootah, the other neighbouring village. The walls in the front of the house are painted green and the columns pink. Outdoors lies a cooking space with broken scaffolding. The house itself was locked when we reached there. The house that the Kathua rape victim and her family stayed in is now monitored by four policemen. Credit: Kabir Agarwal

Four policemen have now been posted here to ‘protect’ the house. They sat on their charpoys in the aangan outside trying to work a makeshift electricity wire they had pulled from Rasana below. “There is no electricity or water here. We have been trying to pull a wire from Rasana, but it hasn’t worked yet,” one of the policemen said.

All the Bakarwal families who live in the region from November/December to April/May have migrated, according to the policemen. “But, there could be one family who is still there deep in the jungle. I have heard that they are still there,” a policeman told me, quite unsure.

I walked deep into the jungle beyond the victim’s house looking for that one family. After a long trek through some difficult terrain, I found a house similar in size and shape to the victim’s house. Inside, Mohammed Jan sat on a charpoy. A foot injury meant that he was unable to migrate to higher ground with other Bakarwal families. 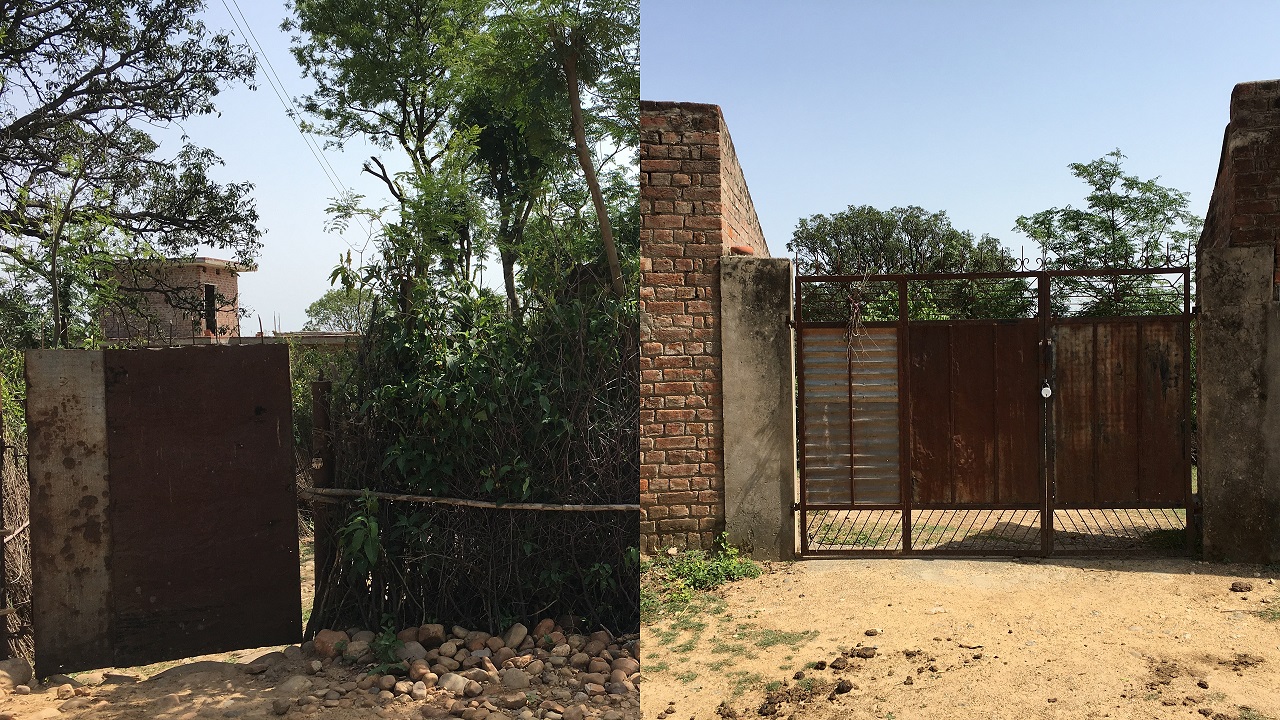 “This year, all the families migrated earlier than usual due to the fear created by the rape and murder. The intention was to drive us away and they have succeeded,” said Jan.

Jan believes that the police are right in naming Sanji Ram as being behind the crime. “He is a communal man. He has always discriminated against us. He has been telling his people not to give us land,” Jan said.

Back in Rasana, I entered Sanji Ram’s house — the man who allegedly planned the brutal rape and murder according to the charge sheet. A woman and a young boy sat on the floor in the aangan sorting rice. They were Sanji Ram’s wife, Darshana Devi, and his grandson, respectively.

She was hesitant to talk at first. Replying with, “I have nothing to say to the media. It is because of you people, that he is behind bars,” to each question I asked. As I asked for a glass of water and settled down on a charpoy next to her, she decided to talk, “Aap khud hi socho koi baap apne bete ko bulayega rape karne ke liye? (Think for yourself, will a father call his son to rape?)”, she asked. According to the charge sheet, Vishal Jangotra, Sanji Ram’s son, was called from Meerut where he was studying to ‘satisfy his lust’ after the victim had been kidnapped. However, it was not Sanji Ram, but another accused, a juvenile, who had called him.

Sanji Ram’s son-in-law, Rajendra Sharma, and youngest daughter, Monica Sharma, walked in. “According to the police, Sanji Ram, is the mastermind. He drugged her, kept her hostage, raped her, for seven days. If he could plan and do all this, why would he dump the body right next to his own house?” Rajendra said, aggressively. 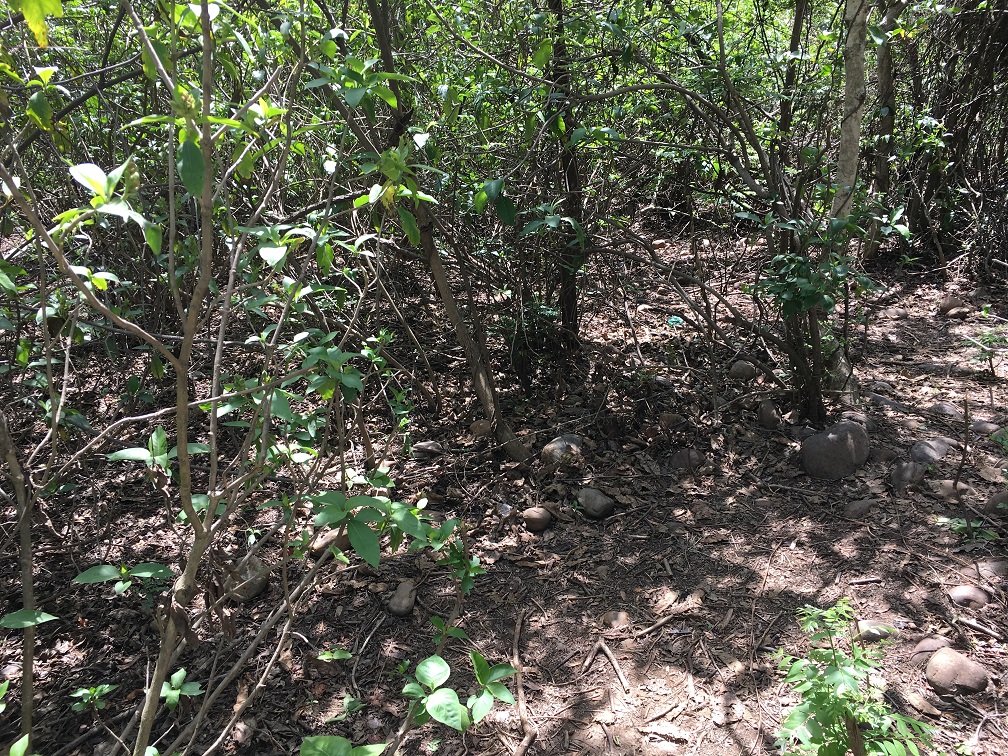 The spot in the forest where the Kathua victim’s body was found. Credit: Kabir Agarwal

He then took me to the spot where the victim’s dead body was found. From the back-gate of Sanji Ram’s house a walk of about five minutes on a mud path leads to the spot in the middle of a jungle. “She was found here. Why would he leave the body here? He could have left it deeper in the jungle where wild animals could have eaten it,” Rajendra said. “The police only wanted to frame Sanji. They have no proof.”

Inside the structure is a raised platform where idols are kept behind a locked cage. Behind the platform were lying some pressure cookers, cooking pans and plates. On the other end of the room, on a small table were kept packets of rice, a tub, and two axes. According to the charge sheet, the victim, covered with mats and durries, was kept beneath this table for the duration that she was held captive inside the devisthan.

Rajendra raises questions about the charge sheet. “How can she be kept hidden here? People come here all the time,” he said. “This devisthan has windows on all sides which are open, how did no one see?” His effort is to show apparent incongruities in the police case to prove that Sanji Ram was not involved in the crime.

Sanji Ram’s daughter, Monica, sees it as a conspiracy by the Kashmiris to malign the Hindu community. “They have sent police officers from Kashmir and they are saying that all this happened inside a place of worship of Hindus,” she said.

“Our entire village is sitting on a hunger strike on the highway. But, no one cares about that,” she said.

A group of women from Rasana have been on a hunger strike since March 31 demanding a CBI investigation into the case. They have been sitting at the Kootah mod on National Highway 44 with placards that read, “We want CBI inquiry”. The women sit on a raised platform under a tree, while the men are seated below on durries that have been laid out. As I introduce myself, they react angrily. “Tum jaise logon ki wajah se sari duniya hum ko gali de rahi hai (It is because of people like you that the world is abusing us)”, said a woman wearing a pink salwar suit.

Several muscular men surrounded me demanding that I furnish a press card. Satisfied with what they saw, they mellowed, slightly. “It is impossible to trust anyone these days,” one of the men said.

Seated at the back of the group was Bhishno Sharma, accused Parvesh Kumar’s grandmother. Wearing a purple salwar suit and a red tilak on the forehead, she was chatting with another woman when I intervened. “What do you want from me? My grandson is behind bars because of you,” she said.

I asked her why she is demanding a CBI inquiry. “I have no faith in the Kashmiri police which wants to malign the entire Hindu community,” she responded.

As I spoke to her, two broad shouldered men with saffron scarfs draped around their neck stood next to me and signalled to Sharma to stop talking. She immediately turned her back towards me and looked away.

A large SUV stopped on the road in front of the protest gathering. Out stepped Prem Nath Dogra, a local BJP leader, along with two armed guards. He was welcomed by the men in the gathering and sat down next to them. He asked them if everything is going fine, to which they responded, ‘yes’. “Don’t talk too much to the media. Lie low for some time. We will create an uproar when the time is right,” he said to the men, who nodded.

The site of the protest has become a gathering point for people from villages all around. “There are only a few people from Rasana. The rest are from nearby villages. Some come for time-pass, others have political aspirations,” said a local journalist who declined to be quoted by name. 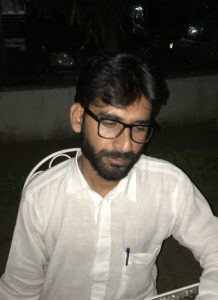 Talib Hussain, a lawyer and activist from the Bakarwal community. Credit: Kabir Agarwal

Dharam Pal Sharma, who claimed to be from Rasana, walked up to me and aired his grievances. “They are targeting Hindus unnecessarily. These Bakarwals marry their sisters. They fight everyday among themselves. That is what has happened here,” said Sharma.

Sharma also points fingers at Talib Hussain, the lawyer and activist from the Bakarwal community who has been at the forefront of the demand for justice in the case, “It is Talib Hussain who has planned all of this. He may even be behind the crime. He wants to gain political advantage through this case,” he said.

I met Talib Hussain in a Jammu hotel later in the evening and asked about the allegations made by Sharma, which had also been made by others at the protest.

Hussain, who lived in Rasana during his childhood, believes that the right people have been booked for the crime. He remains unfazed. “I am ready to face any kind of inquiry. They should call for an inquiry against me. Why don’t they? Because they know I am absolutely clean.”