While witnessing cries of 'Jai Shri Ram' in front of the fire, police claimed the cause was 'electric'. 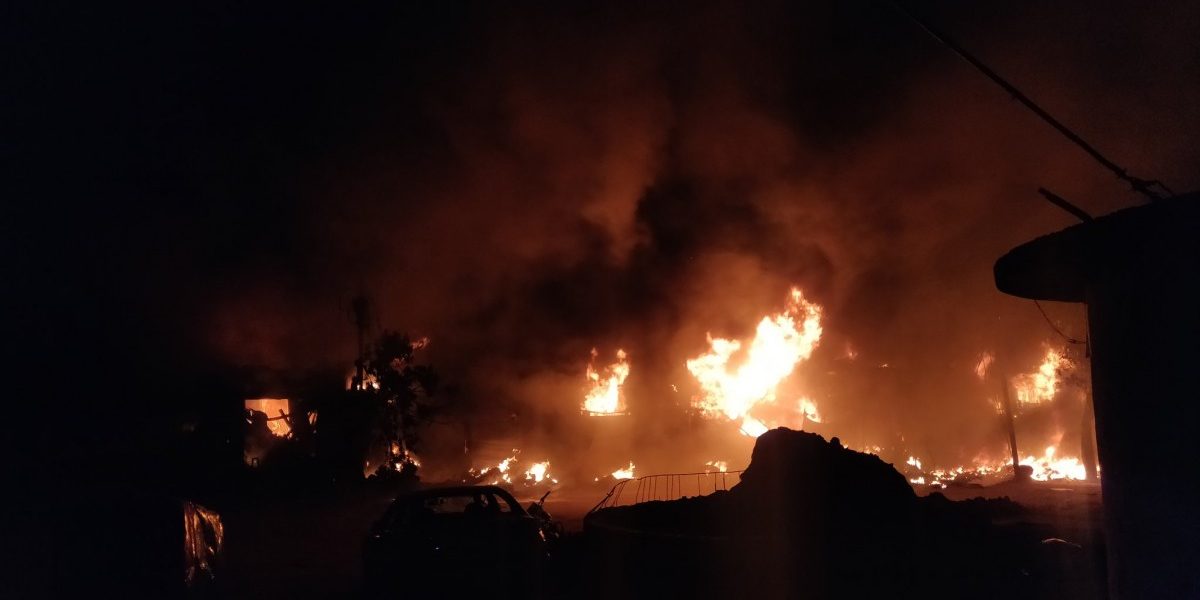 New Delhi: Close to 8:30 pm on Monday, Gokalpuri’s tyre market, located just behind the Gokalpuri metro station, was set on fire. While there is no evidence yet on who was responsible for the arson, the area is predominantly populated by shops run by Muslim businesspeople. The Wire witnessed cries of ‘Jai Shri Ram’ being shouted in front of the fire by a group of Hindutva supporters at the site.

Violence earlier in the day

Gokalpuri is on the far end of the Jaffrabad-Maujpur corridor which had seen a significant amount of violence, with stone pelting causing the death of a head constable Ratan Lal earlier in the day. Four civilians were also killed in the violence.

Right beside Gokalpuri, however, is Kardampuri, where an ongoing anti-Citizenship (Amendment) Act protest had been similarly disrupted by Hindutva groups.

The protest tent at Kardampuri was ragged, with a banner in shreds beside it. Eyewitnesses at the site point to the tears in the tent sheet and say that they have been caused by tear gas being volleyed into the tent, along with what could possibly have been petrol bombs. Several people attested to the tent being set on fire earlier in the day, with the women who have been sitting at the protest site sporting multiple injuries.

While the crowd was restive and tense, a company of Rapid Action Force had blocked the main entrance into the Kardampuri protest area, and were unsuccessfully attempting to convince the crowd to disperse at the time.

People in Kardampuri are not impressed with reporters. One older woman says, “Where were you when this was happening in the afternoon?”

News of attacks at and around Kardampuri had built steam in the afternoon, when most major media houses had focused their resources on US President Donald Trump’s event in Ahmedabad.

Most Indian news channels are only on Trump, even as violence breaks out in India’s capital, including the death of one police person, after a BJP politician promised to take the law into his own hands to evict anti-government sit-ins. pic.twitter.com/SadJYQdMoS

A number of women who were there at the time were still seething. One young woman says, “There was tear gas going on here for over three hours.” An older lady is brought forward, and shows me her left arm, which is bandaged in three different places.

“Why are you here now?” an older woman asks furiously. “Our sons have died.”

At that time, news of one fatality had made its way to the protests.

Forced to leave the protest tent in the women protesters’ anger and disillusionment with the media, conversation with others outside showed a strain of deep panic. There were rumours doing the rounds of people being locked inside a masjid by the police, while it was set on fire. There were rumours of people whose houses had been invaded by right-wing goons, who were being brought from the neighbouring Gokalpuri to Kardampuri.

When we left the Kardampuri protest area, the place which had previously been sealed airtight by the police and RAF was suddenly wide open.

Gokalpuri’s tyre market, predominantly owned and run by Muslim businessmen, had been set on fire.

Police at the scene half heartedly said, “It is an electrical fire.” What they were ignoring was that right behind us at that time, a group of men had gathered and were joyously screaming ‘Jai Shri Ram’ into the blazing heat. There were no visibly anti-CAA protesters at the site.

Moving through Yamuna Vihar, we were met by gangs of Hindutva groups, all carrying variations of sticks – bamboo, hockey sticks, metal rods and pipes, as they moved around in small groups. There was no specific direction or destination that was evident. By this time it was well past 10 pm.

The intermittent police presence across the neighbourhood did not appear to de-escalate the potential for violence on the part of the Hindutva groups – the only time we were halted at a road was when entering the Noor-e-ilahi area, where earlier in the day severe rioting had taken place, with rumours of rioters being ‘bussed in’ from Loni and entering Muslim homes with police protection.