Shringi Nand has been arrested for a vicious assault on a Muslim minor near the Dasna Devi Mandir in Ghaziabad. What do his online profiles say about him?

A screenshot from the viral video where Shringi Yadav can be seen assaulting a minor Muslim boy. Photo: Twitter video screengrab

New Delhi: In a viral video reportedly recorded near the Dasna Devi Mandir in Ghaziabad on March 12, 2021, and posted on Instagram by an account called @HinduEktaSanghh (the account has since been deleted), a self-styled Hindutva activist named Shringi Yadav can be seen viciously assaulting and abusing a minor Muslim boy called Ali (name changed).

Ali had dared to trespass on forbidden territory to drink water. Perhaps the Muslim boy had not read the strong warning written in bold letters on the temple’s board: “This is a holy place for Hindus. Muslims are strictly prohibited here.”

In the video, as blows mercilessly rained on his body, Ali merely looks at his attacker with a bewildered expression on his face. He did not seem to understand the magnitude of his ‘crime’ or comprehend the barbarity of his attacker. 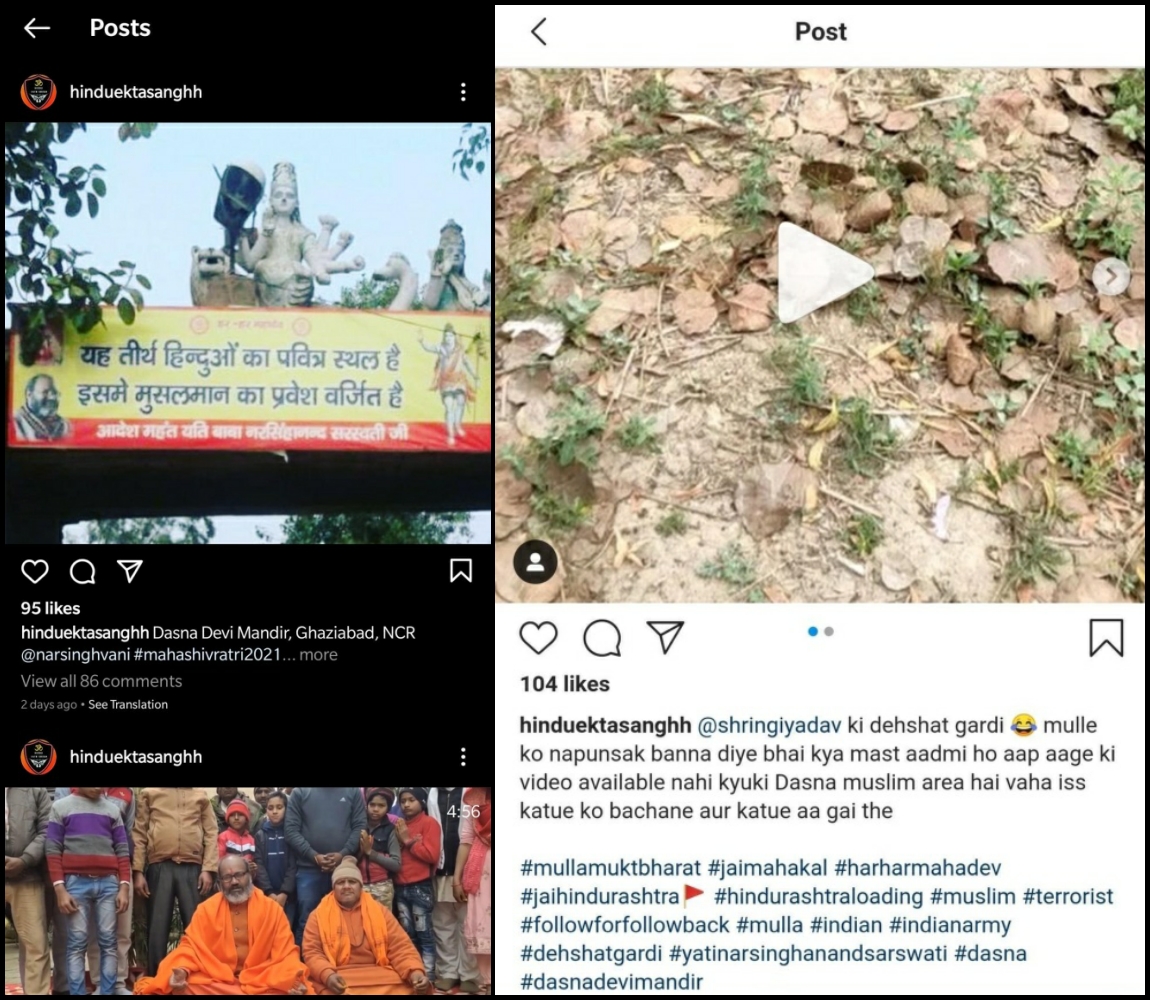 In the caption of the post, the attacker’s “brave act” of slapping, punching and then repeatedly kicking a Muslim child in his genitalia has been glorified as ‘mulle ko napunsak bana diya’ (a Muslim man has been neutered). In a different video posted on the same page, the same attacker can be seen threatening another Muslim boy at knife-point, calling him a Bangladeshi ‘infiltrator’ robbing the livelihood of Hindus. The attacker’s sense of impunity can be understood by the fact that during the attack, he kept telling the cameraperson to record his face.

After a huge social media uproar, the attacker’s account was deleted from Instagram and he was arrested by the Ghaziabad police. For many people, this might seem an isolated and spontaneous incident, soon to be forgotten. However, in order to understand the inspiration behind such a hate attack, a thorough investigation into the attacker’s social media handles was undertaken by The Wire.

Shringi’s now deleted @HinduEktaSanghh handle glorified his openly criminal activities against the Muslim community. In one post on the page, there was a message inciting “a bloodbath of enemies” with the hashtags #NarsinghanandSaraswati, #MuslimAreTerrorists and #JaiHinduRashtra. In another post, Shringi offered to give arms to willing “Hindu brothers”. “We cannot even chant Jai Shri Ram. Until now Muslims should have been burnt alive (sic),” said the caption of the post. 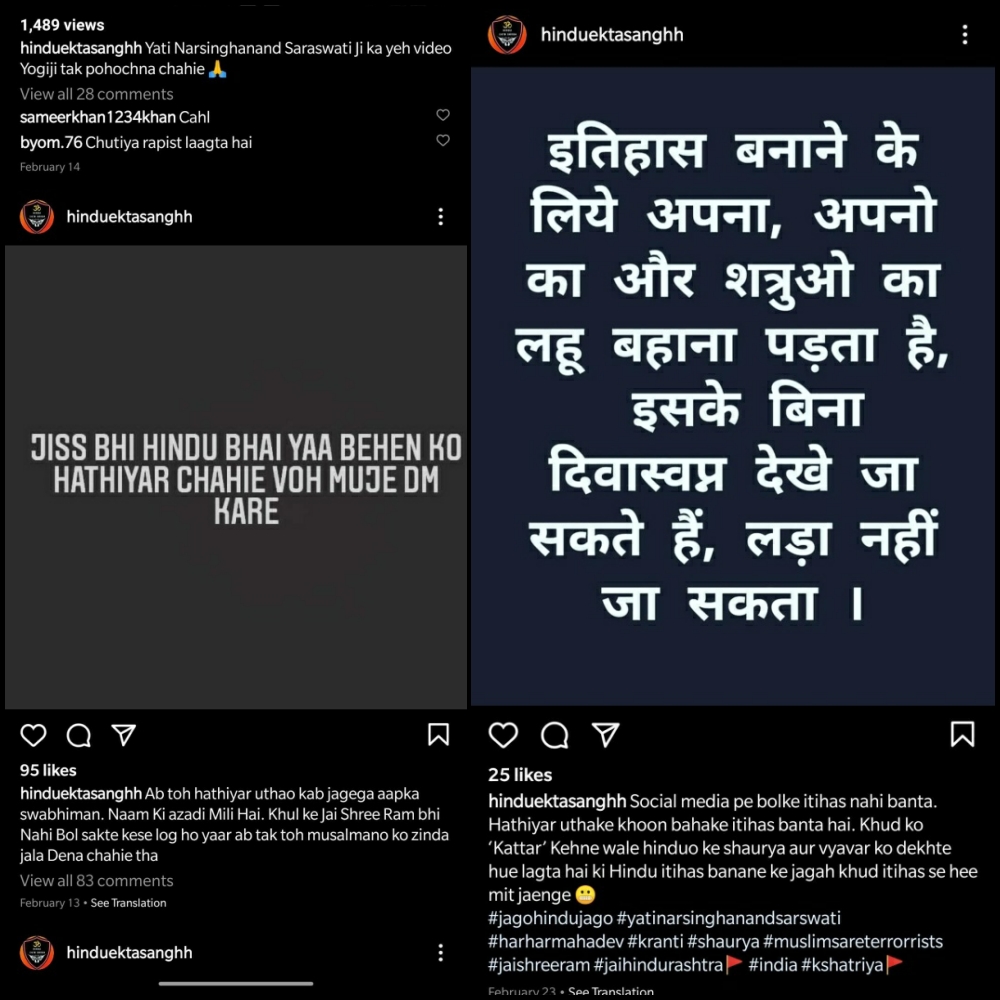 Screenshots of photos from the now-deleted @HinduEktaSanghh Instagram handle.

Besides celebrating Shringi’s Islamophobic crimes and posting murderous content, the account featured several pictures, Islamophobic quotes and videos of Narsinghanand Saraswati, a Hindutva leader from western Uttar Pradesh whose popularity amongst extremists like Shringi Yadav has increased manifold in the past few years. This is for two main reasons: first, because of his association with top leaders of the Bharatiya Janata Party (BJP) such as Kapil Mishra and second, his willingness to say bluntly and openly what mainstream Hindutva politicians baulk from saying about Muslims.

Narsinghanand is the chief priest of the temple where Shringi’s hate crime was reportedly committed. Located in a densely populated Muslim area, the temple is infamous for communal conflagrations and regularly features in the news for the wrong reasons.

Curiously, in Shringi’s bio on his now deleted account, @NarsinghVani had been described as Shringi’s guru. In a special investigation into the Delhi riots of February 2020, The Wire established that Yati Narsinghanand had repeatedly made genocidal calls against Muslims in the run up to the anti-Muslim violence, including on February 22, 2020, one day before the killings started.

At least two of the men and women directly involved in violence in the Delhi riots were inspired by Narsinghanand’s calls to fight Islam and Muslims. RSS activist Ankit Tiwari, who was featured in the first part of The Wire‘s investigation, had been in the audience during the December 25, 2019, event at Jantar Mantar where Narsinghanand had called for violence against Muslims. Ankit Tiwari had posted a video of the same speech on his Facebook page. Ragini Tiwari, the woman whose hate speeches and videos of stone-pelting had gone viral during the riots, calls Yati her guru.

Also read: In Hathras ‘Conspiracy’ Plotline, a Glimpse of How Hindutva ‘Fringe’ is Really Its Mainstream

What makes Narsinghanand’s propaganda even more dangerous is his use of social media and video. He was and remains a regular studio commentator on the panels of leading Hindi news channels such as News Nation, Sudarshan TV and AajTak and is a hero for a number of militant Hindutva networks on YouTube, who make sure his calls for violence reach lakhs of people.

‘Narsingh Vani’ or the ‘Voice of Narsinghanand’ is Yati’s social media handle, the account where he shares his anti-Muslim videos. Yati describes the end of Islam as his supreme mission. In his videos, he describes all of India’s Muslims as jihadis (even former President A.P.J. Abdul Kalam). In a recent debate on the News State TV channel, he described the prophet Mohammad as the “first Muslim terrorist”. On several occasions, he has openly threatened violence against Muslims.

After The Wire’s exposé on the real conspiracy behind 2020 Delhi violence, Narsinghanand made a video attcking The Wire’s staff, calling them jihadis, who are funded by Gulf nations. This video was also posted on the @HinduEktaSanghh page that had broadcast and glorified the hate attack against the Muslim boy outside the Dasna temple. Recently, the Citizens for Justice and Peace wrote a letter to the Information Technology ministry and the Ministry of Minority Affairs, asking them to stop this genocidal broadcast of anti-Muslim hatred.

A cursory glance at Shringi Yadav’s Facebook profile explains what Yati Narsinghanand means to him. He has shared several violence-inciting posts made by Narsinghanand and presents himself as being quite close to the priest. Many of his posts are WhatsApp forwards about how Muslims are increasing their population at an alarming rate. Shringi Yadav regularly posts about Hindus not having enough children and Hindus being unable to stop ‘jihad’. He also posts incendiary and sometimes violently Islamophobic messages from Narsinghanand, which are publicly broadcast to millions of people without a word of warning from the country’s law and order machinery. 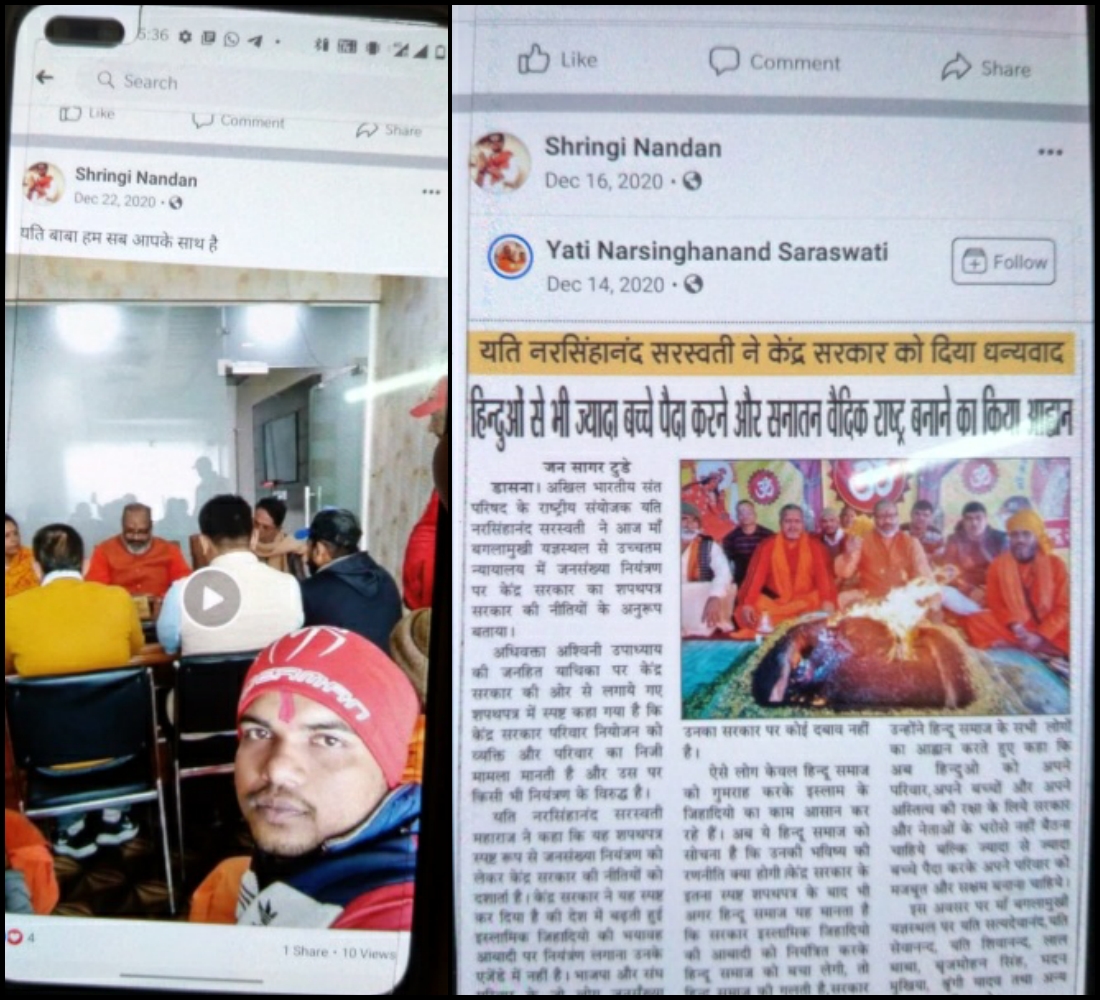 Shringi Yadav’s Facebook page is filled with Narsinghanand’s war cries against Islam and Muslims. In that regard, is the act of repeatedly kicking a Muslim boy on his genitals to make him napunsak – as the social media caption proudly describes – merely an act of individual savagery? Or is it the result of the constant consumption of anti-Muslim hatred aimed at controlling the population of ‘katuwas’ (circumcised men) and ‘jihadi pigs’ and finishing and fighting Islam, which Narsinghanand has been speaking about, including at Jantar Mantar in the national capital?

While the Ghaziabad police’s swift action against Shringi Yadav has been appreciated people on social media. But demands are also being raised for the UP government to investigate the leaders who inspire and incite young men like Shringi Yadav to attack Muslims.