Son says Abdul Samad Saifi described the abuse he was subjected to in a written complaint, and that the FIR the police drafted ignored key details of what he said had happened. 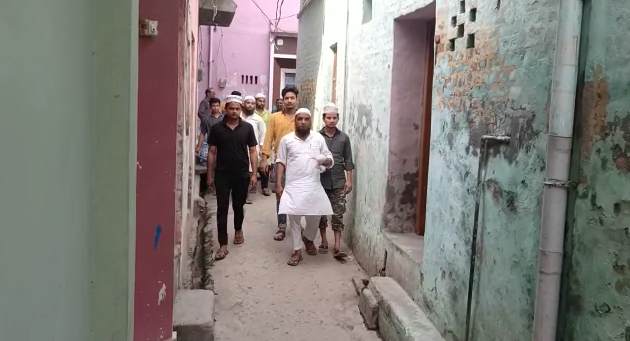 Bulandshahr, UP: After a video of an elderly Muslim man alleging assault due to his religion went viral on Twitter, the Uttar Pradesh police filed an FIR accusing The Wire, Twitter, three journalists and three Congress politicians who tweeted about his travails of conspiring to create communal disharmony.

Abdul Samad Saifi, 72, said in the viral video that he had been assaulted on June 5, his beard cut off, and that he was asked to chant “Jai Shri Ram” by his attackers. On June 7, an FIR was lodged by the police in Ghaziabad against unidentified persons. While the FIR mentioned Section 505 (“intentional insult”) none of the IPC provisions commonly used for communal crimes were invoked.

This, despite the family saying that Saifi’s written complaint of June 6 contained details which made it clear he had been subjected to communal taunts and threats. The complaint written by Abdul Samad Saifi, 72, on June 6, 2021, which described the assault he was subjected to the previous day.

The family confirmed as genuine a copy of the written complaint, dated June 6, that this reporter showed them. At The Wire’s request, local Samajwadi Party leader Umeed Pahalwan Idrisi – who had helped Saifi register his FIR – provided a screenshot of the photograph that had been taken of the complaint the same day. Though there is no official acknowledgement by the police, the date stamp indicates that the allegation of Saifi being made to say ‘Jai Shri Ram’ by his attackers had been brought to the notice of the police before the FIR was lodged.

On its part, the Ghaziabad police, which is officially probing the case, says that Saifi’s assault was the result of an interpersonal matter and that the accused had beaten him up because he had given them a taveez (amulet) which they believe had a negative impact on them.

“Abdul Samad [victim], Pravesh [accused], Aadil [accused] and Kallu [accused], etc were known to each other prior to the incident because Abdul Samad had given taveez (amulet) to several people in the village,” the police said in a statement.

However, Saifi’s eldest son, Babbu, told The Wire his father did not know any of the attackers. He added that  his family trade is carpentry and that the police’s taveez claim is untrue.

The fact that the police has arrested a Muslim has also been officially cited as a reason to deny the crime had any commual angle, as Saifi has alleged. But this claim has also been contested. Aadil’s brother, Fazal Khan, claims that Aadil had only gone to the spot to rescue the victim. “He has been implicated in this case,” he said, adding that if he was guilty, he himself would not have gone to the police station before his arrest.

Ghaziabad (rural) SP Iraj Raja on Tuesday was quoted as saying, “In the first FIR, which was filed on June 7, the victim didn’t name anybody and neither told us about being abducted and thrashed and forced to chant Jai Shri Ram.”

While the police says there is a discrepancy between what the victim told the police and the allegations he made in the viral video, his son Babbu told The Wire this is because the police drafted the FIR themselves and ignored several details that Saifi’s written complaint contained.

The Wire, which obtained a copy of Saifi’s written complaint on Tuesday night, has made repeated attempts to obtain a reaction from the Ghaziabad police to the document. Till the time of publication, the police has yet to respond. If and when they do, this story will be updated.

Saifi’s written complaint, which his family confirmed to The Wire was authentic and had been made on June 6, one day after the beating, states not only that the victim was forced to chant “Jai Shri Ram,” but also that he was asked to “drink” his attackers’ urine when he asked for water. In his complaint, the victim described the incident, including details which indicate his religion was a factor in the assault. The complaint is signed Abdus Samad in Urdu and dated June 6, 2021.

In his complaint, the victim has written,

“An auto driver asked me where I wanted to go. I told him I wanted to go to Hajipur Bheta Dargah Mosque. He told me he is going in the same direction and that he will drop me, after which I sat in the auto. After a while, two more men came and sat inside the auto. And within a minute, they put a pistol to my head from both sides and wrapped my handkerchief to my mouth. Then they stopped and took me inside a room, and beat me up till 7 pm. They beat me up with cable wires, sticks, belts and kicked me using their hands and legs.”

Further, he alleges, “They started beating me more when I sought Allah’s mercy in front of them. They asked me to chant Jai Shri Ram, and then cut off my long beard with scissors.”

He further added that when he asked for water, the men told him to “drink” their urine.

“When I asked for water, those boys urinated in front of me and asked me to drink it. They said they would kill me, if I did not comply,” the complaint reads. “They also told me that they have killed many Muslims like me, and nobody has caught them yet,” it further says. He added that the men also showed him several videos and photos of such instances on their mobiles.

Abdul Samad’s son, Babbu, who works as a carpenter, alleged that the police did not take into account the many details provided by his father in this complaint letter. “People want justice for my father. The accused should be arrested as soon as possible,” he told The Wire, “so that no one from any community is subjected to this kind of crime”.

Additionally, he refuted the police claims that his father knew the accused from before and said that he had no prior connections with them. He told The Wire, “The police version is not based on any true facts. They have made unfounded claims. They said that my father gives people taveez (amulet), whereas we have been working as carpenters for generations.”

At the victim’s house, his elderly wife, Amna sits on a bed around other relatives, sobbing quietly. She says that the incident has had a deep psychological impact not only on her husband but also the family. “My blood pressure has fluctuated since this incident took place. What was my husband’s mistake, that he went to meet his relative in Loni? What was my mistake?” she asks.

The police, however, continue to claim that this is not a communal matter. In a statement, Ghaziabad Senior Superintendent of Police Amit Pathak said, “During the inquiry, no communal angle was found. As per them (accused), it’s a case of personal dispute over an amulet. We have arrested and jailed three accused who thrashed him. Teams are working to arrest other accused…”

He added, “Accused do not belong to a single community, they belong to more than one community.”