Gauri Lankesh's Final Editorial: 'In the Age of False News'

"I want to salute all those who expose fake news. I wish there were more of them." 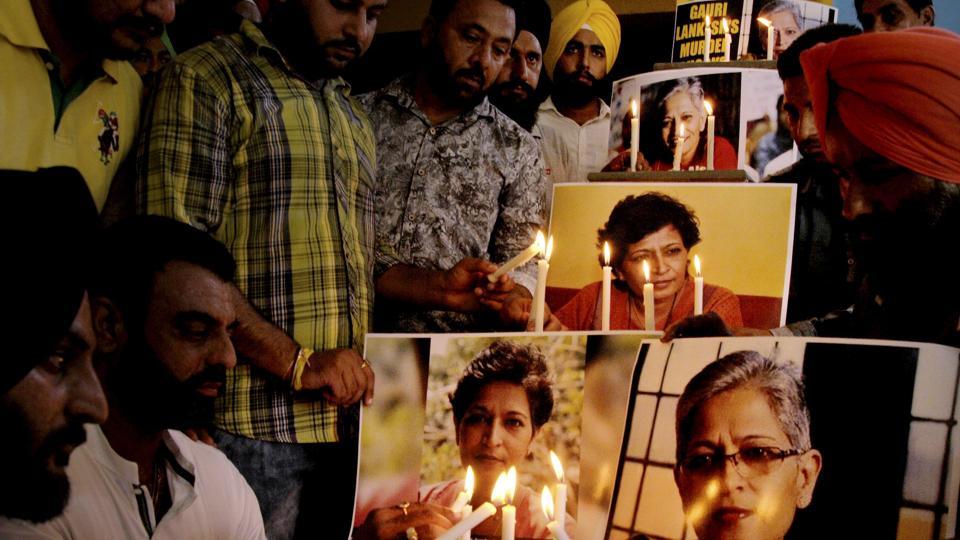 Journalist-activist Gauri Lankesh was shot dead in Bengaluru on September 5. She wrote fiercely against divisive right-wing politics and the Hindutva agenda. Her 16-page weekly Kannada tabloid Gauri Lankesh Patrike, carried an editorial column ‘Kanda Hage‘ (As I saw it) on its third page. In the latest issue, it dealt with fake news and was titled ‘In the Age of False News’. We have translated the editorial to acquaint our readers with the tone and tenor of Lankesh’s writings.

The editorial reads as follows:

In this week’s issue, my friend Dr Vasu has written about the fake news factories at work in India on the lines of Goebbels. Such lie-factories are mostly run by Modi-bhakts. I will try to explain the damage which is being done by these factories in my editorial.

On the occasion of Ganesh Chaturthi a few days ago, a rumour was circulated on social media by people of the sangh. It said that a Ganesha idol can be installed only on spots decided by the Karnataka government; that an amount of Rs 10 lakh is required to be deposited before such an installation; that permission needs to be obtained from the government for the height of the idol; that for immersion they have to take a route where people from other religions don’t live; and, that no crackers are allowed.

The false news was escalated by the Rashtriya Swayamsevak Sangh (RSS) so much that in the end, the Karnataka police chief R.K. Dutta was forced to call a press conference and clarify that the government had framed no such rules. It was all a lie.

When we tried to trace the source of this rumour, we landed on a website called Postcard.news. Run by fanatic Hindutva brigade, the site manufactures fake news and circulates it on social media everyday.

On August 11, Postcard.news ran a header ‘Taliban Rule in Karnataka’ which carried the fake news regarding the intrusive rules of Karnataka government during Ganesh Chaturthi. The sanghis succeeded in spreading the lie across the state. People who were miffed with the Siddaramaiah government for some reason or the other, used the fake news as their weapon.

What is most shocking and sad is that people accepted it as truth without thinking – with their eyes and ears closed and brains shut off.

Last week, after the court convicted fraud guru Gurmeet Ram Rahim for rape, his photos with several BJP leaders went viral on social media. Photos and videos of Prime Minister Narendra Modi and several Haryana BJP ministers were circulating. It irked the BJP and the Sangh. To counter this, they circulated a photo of Kerala chief minister and CPM leader Pinarayi Vijayan sitting with Ram Rahim. It was a photoshopped image.

In the actual photograph, it is Congress leader Oommen Chandy beside Ram Rahim. In the morphed image circulated by rightwingers on social media, Chandy’s face was replaced by Vijayan’s. Thankfully, this propaganda by the Sangh did not succeed as some people immediately produced the original photo to call it out.

The fact is that until last year, there was no one to expose or counter the fake propaganda of the right wing. But now, several people have taken up the task, which is welcome. Earlier, only fake news came to the fore, but now, truthful news is coming out and is getting publicity too.

For instance, Dhruv Rathee uploaded a video on August 17, analysing Modi’s Independence Day speech and pointing out the lies in it. For the past several months, Rathee has been exposing Modi’s lies on social media.

Earlier, Rathee’s videos were watched by a limited audience but this particular video went viral and gathered more than a lakh views on YouTube.

Today, the mainstream media accepts the data given by the government and the BJP as gospel truth, as if the government’s claims cannot be challenged or questioned. When it comes to TV news channels, they are ten steps ahead in this. For instance, when Ram Nath Kovind was sworn in as the president, several English news channels ran the story that he had acquired more than three million followers on Twitter within hours of taking office. The channels kept announcing it the whole day, trying to emphasise how Kovind’s popularity had increased.

Several TV news organisations seem to have teamed up with the RSS nowadays. The truth behind the story is that the official Twitter account of the outgoing president Pranab Mukherjee was assigned to the new president who simply inherited the followers along with the handle. It is noteworthy that it was the former President Pranab Mukherjee who had more than three million followers on Twitter.

Many fact checkers and myth-busters are now taking on the propaganda spread by the RSS and countering it with the truth. While Dhruv Rathee does it through his videos, Pratik Sinha founded a website altnews.in for the same.

Others include websites like SM Hoax Slayer and Boom FactCheck. News portals The Wire, Scroll, Newslaundry and the Quint are actively debunking false news.

All of the people and organisations that I have mentioned have recently exposed the truth behind several fake news propagated by the RSS, which has irked the saffron brigade. What is more important is that these people do not work for money. Their sole aim is to expose fascists and their fake news bandwagon.

A few weeks ago, when heavy rains had brought Bengaluru to a standstill, Karnataka BJP’s IT cell circulated a photo with a sarcastic caption that read, ‘NASA found people walking on moon, later Bengaluru Municipal Corporation (BBMP) confirmed it as Bengaluru road.’ It was clearly an attempt to  disseminate fake news against Siddaramaiah indicating that the state government had not done any work and the roads were full of potholes.

But the plan backfired when it was pointed out that the photo was from BJP-ruled Maharashtra and not Bengaluru.

Similarly, when riots erupted in West Bengal recently, the right-wing shared two posters on social media. One captioned ‘Bengal is burning’ showed charred houses. The second image showed a woman’s sari being pulled by a man with several onlookers. It was captioned ‘Hindu women are getting assaulted in Baduria’. Soon enough, the truth behind these images came out.

The first image was taken during the 2002 Gujarat riots when Modi was chief minister of the state. The second was a still from a bhojpuri movie. This image was also shared by senior BJP leader Vijeta Malik.

Not only the RSS, even the BJP Union ministers are partaking in spreading propaganda and fake news. For example, Nitin Gadkari had shared a picture of Muslims burning the Indian flag and had commented, “On Republic Day, the tricolour being burnt in Hyderabad”. There is a new image search app on Google. If you search an image on it, you will be able to find out where and when the picture originated. Using this app, Pratik Sinha found out that the photo was originally taken in Pakistan during a protest by banned outfits.

During a prime time debate, BJP spokesperson Sambit Patra raised the question of hoisting the tricolor in central universities like the Jawaharlal Nehru University, displaying an image on his tablet of six soldiers hoisting an Indian flag. Later, it turned out that it was a famous image of American soldiers hoisting the American flag after taking control of Iwo Jima island in Japan during World War II. Patra was merely using the manipulated image to deceive people. It cost him heavily when the lie was caught and he was made the butt-end of jokes on social media.

Recently, Union power minister Piyush Goyal shared a photo, boasting, “30,00,000 LED lamps were lighting up 50,000 kilometres of roads across India”. But that photo was also fake. It was a picture of a Japanese street in 2009. Goyal had also recently claimed, “Increase in indigenous charcoal supply in the last three years has resulted in savings of Rs 25,900 crore”. He had also shared a photo, which turned out to be fake again.

In Chhattisgarh, BJP’s PWD minister Rajesh Munat posted a picture of a bridge claiming it to be the achievement of the state government. But the photo shared was actually of a bridge in Vietnam. The post got 2000 likes, but was later deleted.

In our own Karnataka, the RSS and BJP leaders are not far behind in spreading propaganda. Pratap Simha, an MP from Karnataka, shared a report claiming that it has been published in the Times of India. The headline read ‘A Hindu girl stabbed and murdered by a Muslim’. Simha, who preaches morality to the world, did not once try to check the authenticity of the story. None of the newspapers had published such news. In fact, the headline had been photoshopped and the story was given a communal angle. When there was a furore over it, the MP deleted the fake news but neither did he apologise for it nor expressed regret over spreading a lie inciting communal hatred.

As my friend, Vasu, writes in the column that I too made the mistake of sharing a fake news story this week. It was a photo of a rally in Patna that Lalu Prasad Yadav had shared. But soon, my friend Shashidhar Hemmadi alerted me that it was a fake photo. I immediately admitted my mistake and shared the fake and original photos.

There was no intent to incite communal reaction or propaganda. I only wanted to convey the message that people are coming together against fascist forces. Finally, I want to salute all those who expose fake news. I wish there were more of them.

Translated by Naushin Rehman from the Hindi translation of Gauri Lankesh’s editorial (written in Kannada).