In today's globalised world, every nation's human rights record is open to scrutiny.

Muslims take part in a procession after the Friday prayers to protest against the blasphemous comments on Prophet Muhammad by BJP members, in Dhaka, Bangladesh. Photo: Mohammad Ponir Hossain/Reuters.

The naked passion of the self-love of Nations, in its drunken delirium of greed, is dancing to the clash of steel and howling verses of vengeance.

The hungry self of the Nation shall burst in a violence of fury from its shameless feeding.

The dominant leitmotif of the Indian response to global criticism of its worsening religious freedom and human rights record is whataboutery and hyper-nationalism, which believes that the nation is the ultimate moral authority, and there is nothing beyond the nation.

The official response to the United States’ statement on India’s religious record and the societal response to the widespread condemnation of hate speech in India by Muslim-majority nations are only recent examples of a dominant phenomenon. If the first one counters criticism by pointing out America’s human rights record, the second one asserts that no other nation can criticise India, the least of all, non-democratic Muslim-majority nations.

While people, especially urban middle classes, cheered on the government for “sticking it to the Americans” by pointing out their gun violence, consider the absurdity of the false equivalence.

On the contrary, mass gun shootings are not inspired by the ideology of the present party in power, the Democratic Party, or is perpetrated or justified by its supporters. And President Joe Biden responded to the latest horrific school tragedy with the words, “Enough, enough”(!) and made an emotional plea for stronger gun control. And if white supremacism, indeed, the overwhelming force behind domestic terrorism and hate crimes, found the most official patronage, under Donald Trump, the President that Hindu nationalism ironically and ebulliently championed.

That India resorted to the whataboutery of gun violence in the USA something that China — an authoritarian regime with one of the worst human rights records in the world — also used to shield itself shows how much the largest democracy in the world has travelled in the recent years.

Consider further the pattern of response from the Indian government to majoritarian hate speeches and violence in the last eight years: complete and deathly silence – and why should there be an expectation that it would be otherwise considering that top ministers and leaders of the ruling party, including the Prime Minister, have been involved in dog whistles and hate speeches? 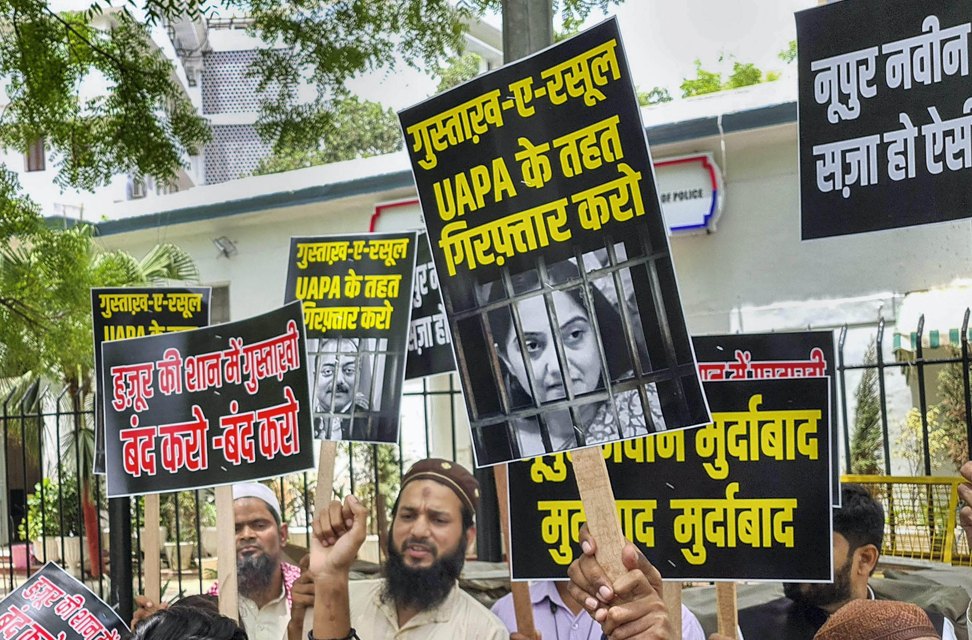 A silence – and worse, total support – from the Hindutva ecosystem, which was seen again in the aftermath of the Nupur Sharma hate speech until the rich West Asian states reacted. If condemnation, and timely legal action was taken against Sharma, India would not have seen the global outcry and the descent into a potentially dangerous communal situation.

Also read: The Full List of 20 Countries and Bodies That Have Condemned the BJP Leaders’ Remarks

The hyper-nationalist argument that India cannot be subject to criticism from the outside and that its problems have to be solved by Indians only – even applauded by some liberal writers – is even more absurd. In a world which has reached the apogee of globalisation our identities are intertwined and contradictory than ever before. To argue at this moment that justice and ethics are determined only by national boundaries is to indulge in cultural relativism and provincialism of the worst kind.

But this so-called nationalist morality, which does not brook any outside interference, is not even consistent. Because it is quick to jump to the condemnation of the treatment of Hindu minorities in Pakistan and Bangladesh. We are a nation that passed the Citizenship Amendment Act that will give citizenship to Hindus and other non-Muslims fleeing religious persecution from neighbouring Muslim-majority nations. So, we can consider Hindu minorities who are Pakistani and Bangladeshi citizens as “our own” but the Gulf States cannot condemn derogatory remarks against Prophet Muhammad even though Islam is not just an Indian religion but a global one?

Indians are the largest diaspora in the world with 18 million people. They have become one of the most important pillars of politics of the Narendra Modi government in the last eight years, with diaspora rallies held by the Prime Minister in foreign countries. Indian-origin American citizens are even exhorted to vote for a particular American presidential candidate, which can be considered an intervention in the internal affairs of a foreign country.

Beyond this instrumental use of the complicated nature of citizenship and identity in the modern world, recent events in India show the pernicious aspects of an increasingly aggressive and inward-looking majoritarian nationalism. If religion was posited as an opiate of the masses, nationalism in conjunction with religion can acquire even deadlier connotations.

This is what figures like Tagore, the composer of our National Anthem, had warned against powerfully such a long time ago: “The Nation, with all its paraphernalia of power and prosperity, its flags and pious hymns, its blasphemous prayers in the churches, and the literary mock thunders of its patriotic bragging, cannot hide the fact that the Nation is the greatest evil for the Nation.”

The nation devouring itself is the scene that we are witnessing today.

The nation, after 75 years of independence, should have been at its strongest internally, binding together and healing the wounds of the Partition. Instead, it is showing signs of extreme weakness because of the turning against a section of its own citizens. That is why we see the brittleness and prickliness towards global condemnation, and the unleashing of nationalist social media hoards to counter this “deep conspiracy” against India by virtually everybody in the world; it does not matter whether it is the comments of an international celebrity like Rihanna, an official American statement, or a Gulf State summoning the Indian envoy.

The way out of the morass of cultural relativism can only be through a more confident nationalism that is tolerant and respectful of national and global diversity and plurality, and accommodative of internal dissent. It is through the willingness to see that we do not have answers to all human problems and that other cultures too have various things to teach us.

It should tell us something that in most of the authoritarian, formally non-secular Gulf States, with an abysmal political freedoms record, hate speech by high ranking political functionaries against minority religions cannot be countenanced in the way it is in India now, and that there are strict laws against the abuse of any religion.

Here, nevertheless, every citizen has the moral obligation to speak out against all kinds of oppressions and atrocities, without drawing false equivalences, and beyond national confines. What is needed is a far superior global compact and moral order in which all nations equally participate and are equally open to global scrutiny. Rather than simplistic cultural binaries, this is what Tagore envisaged as a “world festival” in which “people of the West and the East march in a common crusade against all that robs the human spirit of its significance.”

Ultimately, the greatest irony is that while India curls inwards with its majoritarian religious nationalism, in its founding moments, India had played a stellar role in the adoption of the Universal Declaration of Human Rights in 1948 which sought precisely for such a universality. And commendably, India had successfully challenged the sovereignty clause of the United Nations to censure South Africa’s apartheid in 1946 and continued to champion the cause of ending racial inequality there for decades after that.

It should make us pause that the same India in the present resorts to the sovereignty argument to ward off outside criticism.