While the State Investigation Agency has alleged gross irregularity and from on the part of the FAT-affiliate schools, the Trust maintains that it is a 'non-political entity' and called the authorities' allegations "baseless". The head office of the Falah-e-Aam Trust in Nowgam, Srinagar. Photo: Aasim Bhatt.

Afreen Akhtar (29) was excited when she joined as a teacher in the Imamia school (*name changed) in Srinagar three years ago. Akhtar couldn’t complete her higher education due to  financial constraints at home. While she lost her father in a road accident decades ago, her mother left no stone unturned to clear the path for her education to continue.

“Throughout my career, I went through many trials and tribulations after losing my father. After completing my graduation, I got a B.Ed but couldn’t continue my studies. Our sole source of income come from our mother’s spinning wheel and embroidery work,” Akhtar said. “But after I joined the school as a teacher, things were looking stable and I was able to save a small amount of money for my marriage, from my monthly salary.”

The school Akhtar works at is affiliated with the Falah-e-Aam Trust (FAT) and the Jammu and Kashmir government recently ordered the cessation of academic activities in schools run by the FAT, a body affiliated with the Jamaat-e-Islami (JeI), a socio-religious political organisation that was banned by the Union government in 2019.

According to her, the students who are studying in these schools have completed mid-term examinations already, and in many schools, exams are in progress.

“Students can join other private or government schools, but where will 8,000 teachers go? Our employment is at stake,” she said.

Thousands of students studying in these schools have been directed to enrol in nearby government-run schools for the current academic session.

According to the government order, all CEOs/Principals have been asked to facilitate the admissions of these students. Moreover, new admissions into these FAT-affiliated institutions and the registration of such institutions have also been banned.

“The Chief Education Officers, in consultation with District Administration, have been directed to seal all these banned institutions within 15 days, ” the order reads.

The ban comes after the State Investigation Agency (SIA) of the Jammu and Kashmir Police, which is probing the case, allegedly found gross illegalities, outright fraud, and mass-scale encroachment of government land by these institutions.

According to official figures, 11,000 students studying in these schools. However, an unofficial estimate suggested that more than 350 schools are running under the FAT and that more than one lakh students are enrolled in them. So far, no list of banned schools has been published by the government.

Days after the government order went viral, the Trust declared that barring seven, all these schools have ceased to be affiliated with it since the JeI was first banned, in 1990, and then again recently, in 2019.

Things are not clear as to how many schools will have to cease academic activities, leading to fear and anxiety among thousands of students,  parents, and teachers. Unemployment is already at its peak in Jammu and Kashmir, and commentators claim that the move will not only affect thousands of students, but will likely render thousands of teachers teaching in these FAT-run schools, jobless.

Numan Ahmed (35), a teacher affiliated with one of the FAT schools in Srinagar, told The Wire that there are thousands of teachers who will be directly affected by this order.

“Where will we go if the government seals our school? I have been teaching in a FAT-affiliated school for the last four years. Before issuing this order, did the authorities think about us? Aren’t they snatching our livelihood?” Ahmed asked.

Mohammad Akram* (20), a student of one of these schools in Srinagar, says that their school has a curriculum from the Board of School Education (BOSE), like other government schools. “Our only additional subjects are the Quran and Islamiat. Both subjects focus on the moral values of humans,” they said. Students inside an FAT-affiliated school in J&K. Photo: Aasim Bhatt.

“The Quran teaches us respect for human values, and Islamiat is another subject in which we learn the study of Prophets and events that took place in the history of Islam. How can the Quran and Islamiat promote radical and ‘Jihadi knowledge’?” Akram told The Wire.

According to the government order, the FAT has its roots in the “radical body”, the JeI, which is proscribed by the Ministry of Home Affairs (MHA) under provisions of the Unlawful Activities (Prevention) Act (UAPA).

After the reading down of Article 370, the National Investigation Agency (NIA) and SIA carried out multiple raids on JeI offices in different locations in Jammu and Kashmir.

The raids were conducted over the JeI’s alleged links with militant funding cases. Since then, hundreds of banned Jamaat workers have been arrested, detained, summoned, and interrogated. Its chief, Abdul Hamid Fayaz, is still languishing in jail.

Why has the FAT come on the agencies’ radars?

The FAT was first banned in 1990 and. at the time, around 11,000 students were studying in schools run by the trust.

After the ban, a majority of these students and teachers were adjusted into government-run schools. FAT officials said that they knocked on the door of the judiciary and the ban was overturned.

After the ban, the FAT handed over the management of the majority of its schools to Resident Welfare Associations (RWA) and village committees. Trust officials say that it directly controls less than two dozen schools in the region.

In the latest order, the J&K administration has referred to the May, 1990 ban order, followed by two court observations made in May 2005 and December 2021 to claim that the FAT has been running the schools illegally after the ban under the pretext of a high court order.

The administration also claims that in 2019, it had informed the J&K Board of School Education that the registration and examination forms of students of FAT-run schools should be submitted through nearby government-run schools. 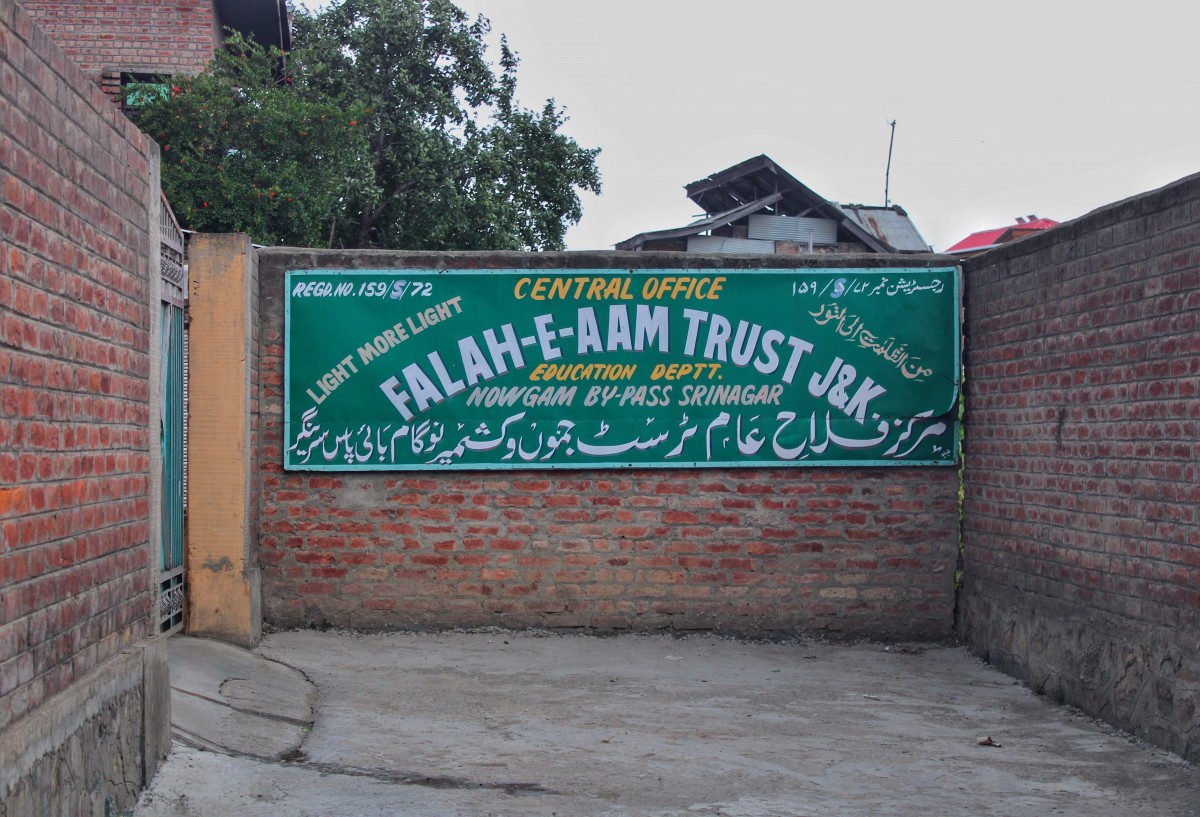 In a statement issued in response to the government order, the chairman of the FAT called the ban “unjustified”, clarifying that the FAT isn’t affiliated with the JeI and that only seven schools among those still running are affiliated with it since the FAT was banned in 1990.

He claims that after 1990, the majority of the schools ended their affiliations with the trust, leaving only 18 schools still affiliated with it. Of these, 11 schools have since ceased to affiliate with or stopped operating under the FAT.

In 1990, the FAT had moved the J&K high court through a writ petition filed by K.K. Venugopal, a well-known Supreme Court lawyer, who got a stay order on the ban. Venugopal is the current attorney general.

The Trust-affiliated schools, according to the chairman of the FAT, give education to their students following government-approved and JK BOSE-recommended syllabi. The chairman also argued that nothing improper is taught in these institutions that should result in any punitive action.

“The Trust was taken aback when it learned the news of order issued by the Board for cessation of educational activities in these purely academic institutions run by the Trust,” its statement read.

“The trust is a non-political entity created for the promotion of education in this educationally backward region and it has no political or any unlawful ambitions at all,” it continued, clarifying that it is no longer affiliated with any religious organisation, including the now-banned JeI of J&K, and calling it a ‘baseless allegation”.

“It has been, time and again, made amply clear that the Trust is an independent, government-recognised and registered non-political entity having no affiliation with any political or religious organisations. Yet, these false allegations are leveled against the trust to defame it and thereby cause irreparable loss to its reputation as an excellent educational institution meant for the imparting of knowledge to all according to modern trends,” read the statement.

The chairman of FAT said that the order issued by the Board of Secondary Education is quite unjust and without any justifiable cause or reason.

“The Trust vehemently demands the revocation of this unjustified and unconstitutional order depriving hundreds of students, both male and female, from getting an education from these purely educational institutions, which is tantamount to the violation of the fundamental right to education of the affected students, as well as the Trust,” he said.

What do FAT-run schools mean to orphans?

Uzaik* (24), an alumnus of one of the FAT-affiliated schools, told The Wire that these education institutions are lifelines for orphaned children.

Uzaik lost his father when he was just around six years old and was admitted to an FAT-affiliated school, where he was given an education free of cost.

“If today, I am looking at a Doctorate or civil services exam, it’s all due to these institutions. If I wouldn’t have been admitted to the school, I would have been burning my skin as a labourer somewhere else,” he told The Wire.

Uzaik said that he didn’t want to get involved in the present controversy but that he wants to make clear that these schools are very important for orphans. Ideological differences aside, shutting down these schools will end the dreams and careers of many orphans who are getting an education in these institutes.

“I urge the government, if there are any bad elements linked with these educational institutions, try to get them out instead of closing the schools. Shutting down these institutions will ruin the futures of thousands of students who cannot afford elite schools,” Uzaik added.

“We have 300 hundred students in the Srinagar-based FAT-run school where 90 are orphans. They are being taught free of cost. In these schools, the management keeps affordable fees while imparting religious education, which the other government and private schools don’t have, ” Numan Ahmed told The Wire.

“If these schools are banned, I don’t think that orphans will get this elite education elsewhere,” he added.

Reacting to the order, People’s Conference chief Sajad Lone said, “Though we have political differences with the JeI, the banning of FAT (schools) is a regressive and discriminatory step. Doesn’t a Kashmiri child have the right to study where he wants? The government of the day needs to understand societal sensitivities.”

Apni Party president Syed Mohammad Altaf Bukhari called the ban ‘unwarranted’ and said the decision against these schools is fraught with huge consequences that will not only ruin the academic careers of thousands of students, but will also render hundreds of families of school staff members bereft of livelihoods.

Bukhari urged the Lieutenant-Governor (L-G) to revoke the decision, keeping in view the larger interest of students enrolled in the FAT schools and the livelihoods of teachers and other staff members, besides the community’s educational requirements in Kashmir.

A Srinagar-based advocate, while speaking on the condition of anonymity, told The Wire that the recent order is a brazen attack on the fundamental rights of individuals; a direct attack on Article 19(1) (g) of the Constitution.

“This ban is ridiculous and seems to have been imposed to avenge ideological differences. It reflects a non-application of mind of the authorities at the helm of affairs in J&K,” they said.

*The names of some individuals have been changed to protect their identities.