The BJP Has Turned Diwali Into a Festival of Hate

Objections to a recent FabIndia ad – and the company's decision to delete it – highlight the real pathology India needs to confront. 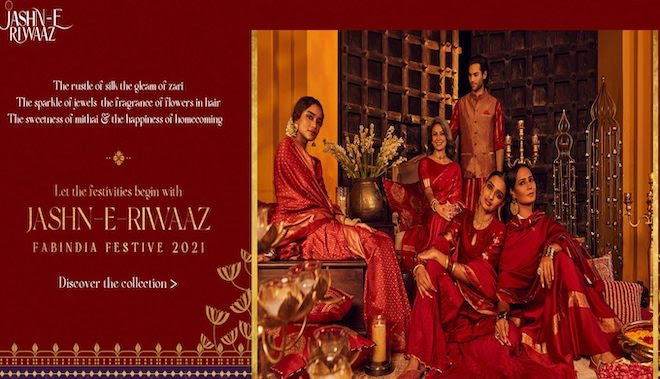 The Fabindia advertisement which the company withdrew after Hindutva protests.

Tesjasvi Surya is an MP from the ruling Bharatiya Janata Party. He is also a nasty, bigoted young man whose tweet – ‘Terror has no religion. But the terrorist definitely has a religion, and in most cases, it’s Islam’ – was deemed so inflammatory by his own government last year that it got Twitter to withhold it from impressionable Indians.

This week, Surya objected to clothing company Fabindia’s use of an Urdu phrase ‘Jashn-e-Riwaaz’ – which translates as ‘the celebration of tradition’, though the word for tradition should be spelt ‘ravaaj’ and not ‘riwaaz’  – in an advertisement for this Diwali festive season.

This deliberate attempt of abrahamisation of Hindu festivals, depicting models without traditional Hindu attires, must be called out.

And brands like @FabindiaNews must face economic costs for such deliberate misadventures. https://t.co/uCmEBpGqsc

There are many things about this BJP leader’s tweet that are shocking. The lazy, communal equivalence drawn between language (Urdu) and religion (‘Abrahamisation’), for one. And his bizarre objection to the clothes the models are wearing – three are in saris, one in a shalwar-qameez, and one in kurta-pyjama – as not being ‘traditional Hindu attires [sic]’.

Urdu is one of India’s officially recognised languages, and, unlike English, the language Surya tweeted in, is actually of ‘Indian origin’. And though its words are not always pronounced correctly, Urdu is a staple of Bollywood. The Mughals used the phrase Jashn-e-Charaghan, or festival of lamps, to describe Diwali.

While the likely ‘non-Indic’ historical origins of at least the shalwar-qameez and the kurta are well known, most of us would regard the very idea that modern clothes have a religious identity as preposterous and offensive (though Narendra Modi probably would not agree). Another prominent online Hindutva activist objected to the women not wearing bindis and said those who refer to Diwali as the ‘festival of love and light’ are guilty of “de-Hinduising” it. I suggest she train her guns on the Prime Minister’s Office, which has no problem describing Diwali as “the festival of light”. Indian embassies in Spanish speaking countries routinely call Diwali ‘Festival de las Luces’. Perhaps the BJP should send them a memo.

I am saddened but not surprised by Fabindia’s quick decision to kill the ad. Its claim that the phrase ‘Jashn-e-Riwaaz’ was not meant to be a description of Diwali also seems a cop-out. But the fact is that bigger Indian brands and companies have wobbled in the face of Hindutva bigotry. Last year, Tanishq, owned by the Tata group, pulled a beautiful ad showing a mixed community home. On the other hand, Surf Excel, faced a vicious onslaught for a heartwarming Holi ad showing a Muslim boy and Hindu girl but withstood the pressure, perhaps because its parent company, HUL, is a multinational.

Fabindia and Tanishq chose to buckle not because their ads were off-key or really ran the risk of alienating customers but because they know India is not a country governed by the rule of law. They know pro-government activists can easily resort to force and violence against their outlets and employees and that the police will cut them all the slack they need. They know that being on the wrong side of the Hindutva establishment can mean being targeted in various ways: a police case for ‘hurting sentiments’ can be filed, a tax raid may take place, the Enforcement Directorate can dredge up some frivolous complaint and issue a summons. The company and its owners can then spend years battling it court in court.

So, tempting though it is to criticise Fabindia and others like it for being lily-livered, our anger needs to be directed elsewhere. By elsewhere I don’t just mean the likes of Surya and other Hindutva trolls but at the political leadership of the BJP and the RSS, which has been doing everything it can these past few years to convince the country’s Hindus that they and their religion are under attack. The Hindutva propaganda machine has already brought us ‘love jihad’, ‘land jihad’, ‘UPSC jihad’ and ‘vendor jihad’ and now they gave discovered ‘ad jihad’. The aim is to make Hindus feel insecure and drive a wedge between them and India’s religious minorities.

Surya was easily able to target an Urdu phrase because last month the chief minister of Uttar Pradesh did the same, and then drew praise for his ‘great governance’ from Prime Minister Modi. In the perverted political food chain that the BJP has spawned, the more a politician targets Muslims, Islam and ‘Abrahamic’ faiths, the faster they will ascend through the ranks. This is the real pathology India needs to confront.