The police went through the fuss of keeping some 'public witness' identities secret – using pseudonyms for 15 such individuals who said they feared for their lives – only to expose their real names and addresses in a table included among the 17,000 pages. 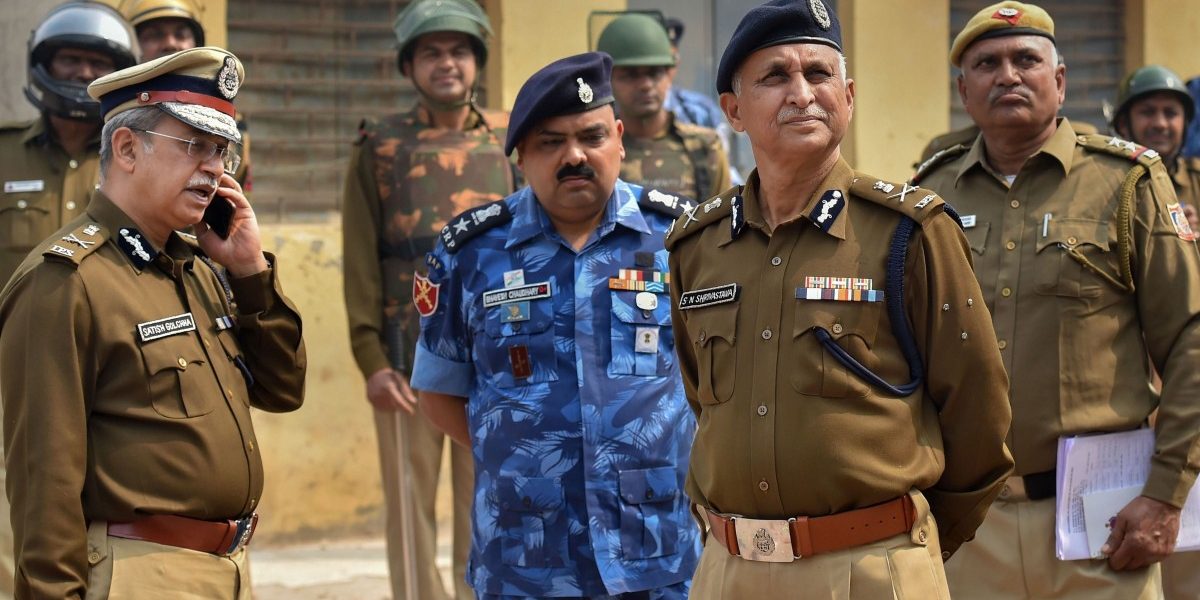 New Delhi: It’s a blunder which could cost careers if not lives. The Delhi Police Special Cell has (inadvertently?) included in its voluminous chargesheet in the Delhi riots ‘conspiracy’ case a document that provides the full names and addresses of 15 ‘public witnesses’ whose identities the police claims require protection. Indeed, the chargesheet uses pseudonyms whenever their statements have been quoted, purportedly because they apprehend a threat to their lives.

The 15 public witnesses – four Hindu and 11 Muslim, as it now appears, based on their disclosed identities – have been quoted copiously in the ‘final report’ section of the chargesheet in FIR 59/20 using what the police calls “pseudo names”: Beta, Gama [sic], Delta, Echo, Golf, Hector, Jupiter, Leema [sic], Mike, Oscar, Alpha, Bravo, Omega, Victor and Charlie.

If indeed the witnesses have grounds to be so fearful of the accused, the Delhi Police officers who have disclosed their names and addresses to the accused – all of whom were given copies of the chargesheet – after themselves insisting on secrecy have a lot to answer for.

The disclosure – which causes both dismay and mirth – also raises doubts about the credibility of Delhi Police’s investigations and the quality of the security it is meant to provide in the national capital.

It is not clear if the trial court has noticed this bloomer.

The February 2020 riots in Delhi lasted four days and led to the loss of 53 lives, including one policeman. Among the civilians killed, 40 were Muslim and 12 were Hindu. Most of the property and all the places of worship suffering serious damage in the violence belonged to Muslims.

Despite the clearly targeted nature of the violence and the role of Hindutva politicians in making inflammatory speeches in the run up to the riots, the Delhi Police have arrested a number of (mostly Muslim) activists involved in the peaceful protest against the Citizenship (Amendment) Act. In a 17,000 page chargesheet unveiled last month, it has accused them of a conspiracy to defame the country during the visit to India of  US President Donald Trump.

In an application to the Patiala House court in June, the Delhi Police special prosecutor said that these witnesses “stated facts relating to the larger conspiracy hatched by the accused persons arrested and stating about [sic] the involvement of some other persons apart from the arrested accused persons”. 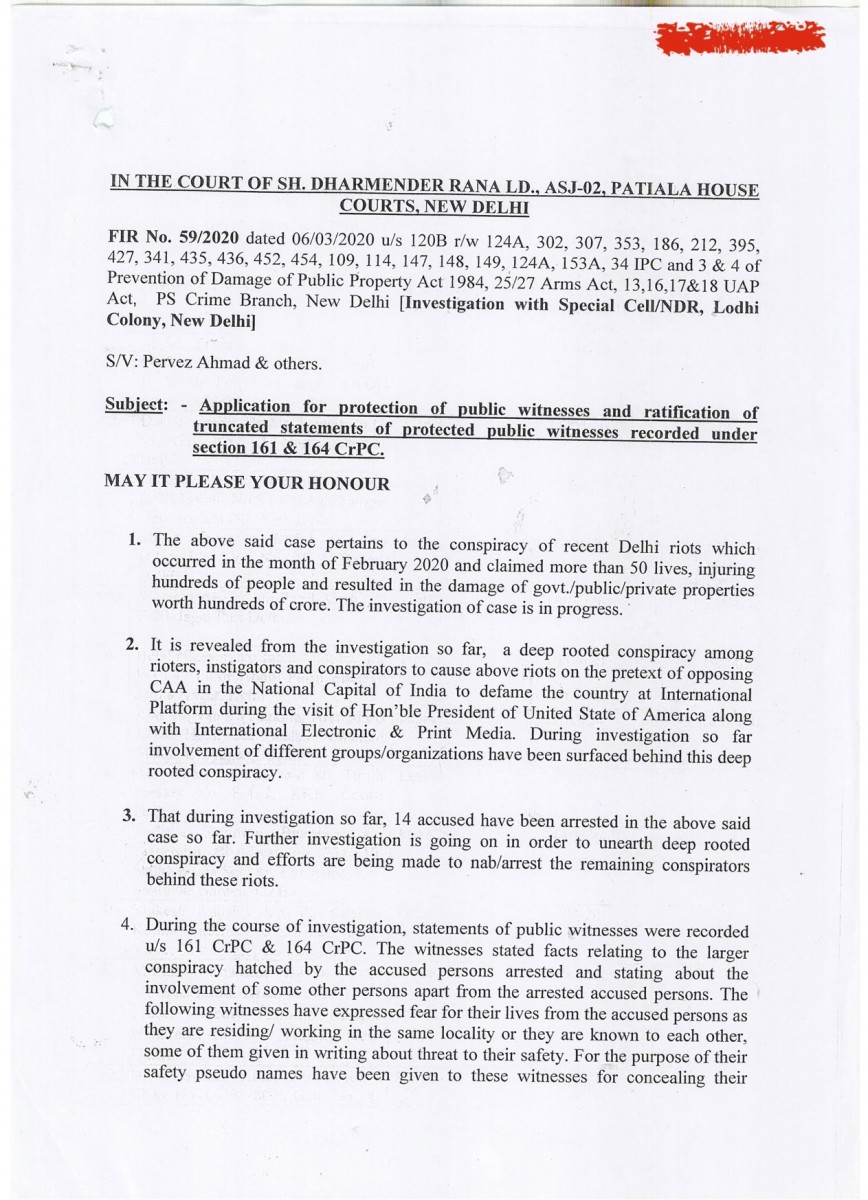 The court was told that these witnesses “have expressed fear for their lives from the accused persons as they are residing/working in the same locality or they are known to each other, some of them given in writing about threat to their safety. For the purpose of their safety pseudo names have been given to these witnesses for concealing their identify.”

The police application – which figures in the chargesheet documents – then lists out the witnesses needing protection with their full names and addresses and the corresponding ‘pseudo name’.

Though the application says that “it is therefore requested that identity of the above mentioned public witnesses with pseudo names, as mentioned against their names, be kept confidential during the proceedings of this case as per section 44” of the Unlawful Activities (Prevention) Act. 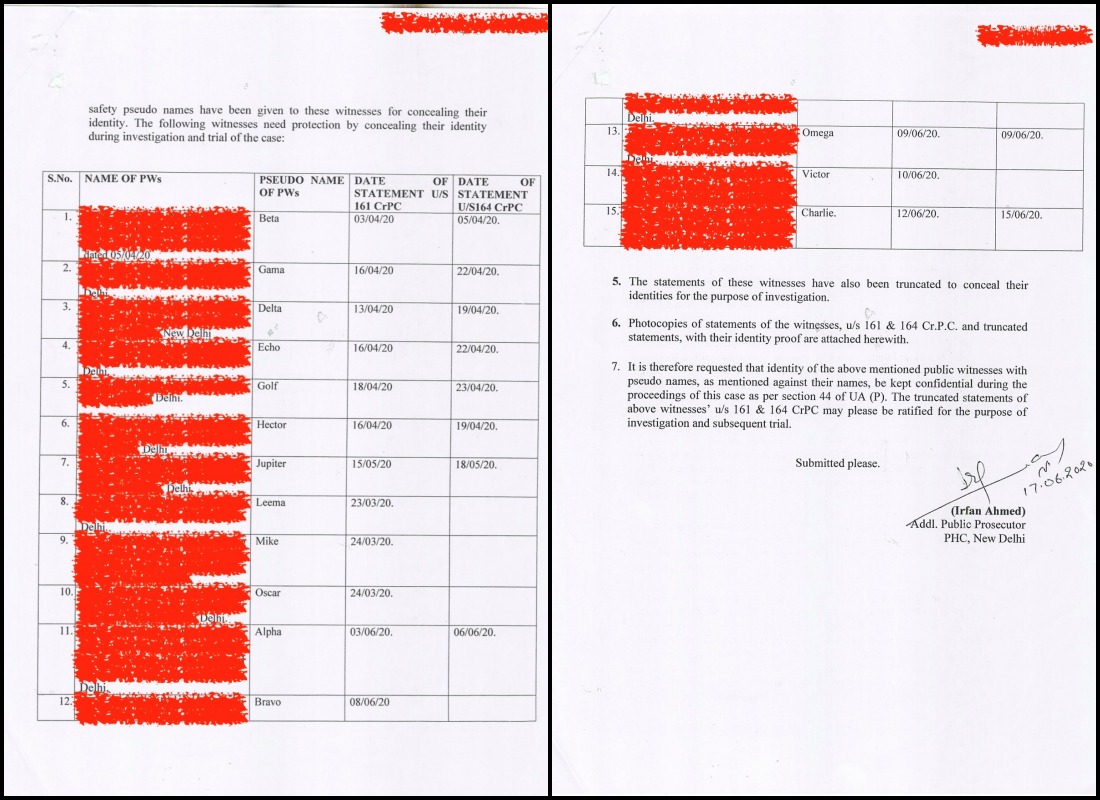 The list of the 15 public witnesses. The Wire has redacted their names and addresses.

Although the chargesheet is a public document and copies of it are with all the accused and their lawyers, as well as with the media and others, The Wire has redacted the names and addresses of the 15 ‘public witnesses’ in order to protect their identity and is also withholding information about the section of the chargesheet where the Delhi Police Special Cell list has been reproduced.

Given the importance the Delhi Police has attached to this case, the casual manner in which the identity of secret witnesses has been leaked is likely to raise questions about not just the competence of its investigation but its direction as well.

If the witnesses are so crucial, why has the police allowed their lives to be jeopardised by revealing their identity in the chargesheet, which is essentially a public document? Or could this official indifference to the security of these ‘witnesses’ be the product of the police’s belief in their limited utility – that their testimony is unreliable and will not hold up in a court of law?

Either way, the Delhi Police brass must answer many questions.

Earlier in the day on Wednesday, The Wire drew the attention of Delhi Police commissioner S.N. Shrivastava to what his force had done and put four questions to him:

1. Are you aware of the fact that … information [about the witnesses] has been handed over to the accused/made public by the Delhi Police?

2. Is it the Delhi Police’s stand that the 15 witnesses no longer face any threat and hence this disclosure has been made?

3. In the event that the Delhi Police still believes there is a threat, what steps do you intend to take to ensure the security of the 15 public witnesses?

4. In the event that you still believe there is a threat, will the Delhi Police take disciplinary action against all the police officers and prosecutors who cleared the submission of this information in the chargesheet?

This story will be updated with Shrivastava’s responses when they are received.