"A team of different officials reached us again tonight. They harassed us and threatened us to leave our home immediately," Fatima's brother said. Her father is currently still in custody.

New Delhi: Authorities completely demolished the home of Javed Mohammad, a leader of the Welfare Party of India and father of activist Afreen Fatima, in the evening of Sunday, June 12.

Amid heavy police deployment, two JCB bulldozers reached Mohammad’s residence in the afternoon. The bulldozers, after taking down the front and the back gates, took out personal belongings from inside the house and dumped them onto an empty plot next to Fatima’s residence.

Representing Mohammad Javed, advocate KK Roy and a team of lawyers have filed a writ petition. Roy explained, “The demolition has taken place on dubious grounds. “The house is not in the name of Javed Mohammad, it is in the name of his wife Parveen Fatima. However, the notice served to the family has been served in the name of Javed. Another key point being that the notice served to the family is dated. No previous notice was given to them. Therefore, we have challenged this and have also written to the CJI demanding a compensation for the family and reconstruction of their home.”

The demolition began with the walls of their home before the entire structure was levelled.

In UP’s Prayagraj, demolition of Javed Mohammad’s residence begins. As per police, he is one of the main conspirators of violence in the city on June 10. Javed is associated with Welfare pary of India and was arrested along with wife and one of their daughters. pic.twitter.com/1aE1HyP7on

Over 60 people have been arrested amidst a crackdown on protestors in Prayagraj (Allahabad) in connection with the violence on June 10, which saw stone pelting, the torching of vehicles and a subsequent lathi charge by the police.

Javed Mohammad, a prominent face in the anti-CAA protests, was named as a key conspirator by the Uttar Pradesh police alongside 10 others, and was taken into custody from his Kareli based residence on Friday.

Later that day, his wife and daughter were also detained, family members say, but the were subsequently released.

The police claim Javed Mohammad gave a call for the Friday protest against the controversial statements BJP leaders made on the Prophet.

A notice to demolish his residence had been handed over to the family on June 11 after which the police reportedly made efforts to get the family to leave the home, as several female members of his family were staying in the house.

Heavy police presence outside @AfreenFatima136 home in Allahabad. Local administration is forcing Muslim residents to leave their homes for demolition. Fatima’s mother & sister remain illegally detained; while the police are [framing], her father has a “mastermind behind protests.” pic.twitter.com/Uc815XlBnB

Mohd. Umam Javed, the brother of Afreen Fatima, told The Wire that a team of policemen had reached their home and threatened the family with ‘bulldozer action’.

“A team of different officials reached us again tonight (June 11). They harassed us and warned us to leave our home immediately. We have been told that they will be back at 2 am to get us to empty our home,” he said.

The notice served refers to illegal construction of the family’s home and reads, “In a case pertaining to the matter a notice was sent to the family on the 10th of May and a hearing was to take place on the 24th of May. However, no response was given from the family.” As per the notice, the house is scheduled for demolition on Sunday at 11.00 am.

Mohd. Umam told The Wire that the notice is completely baseless, saying, “We did not receive anything and we had no information about construction pertaining to five floors or upwards.”

According to a letter released by activists, the action is illegal and highly dubious.

The letter states. “The fact that the notice was not even delivered in the name of the actual property holder (the property is in the name of Afreen Fatima’s mother) makes its authenticity highly dubious, as even basic proceedings would have uncovered this fact. Further, the notice was dated June 10 but pasted only late at night on June 11, a Saturday, even though police has continuously been present at the house since June 10. It seems clear that the notice was hastily issued on a weekend night to ensure that the family has no opportunity for legal recourse.” 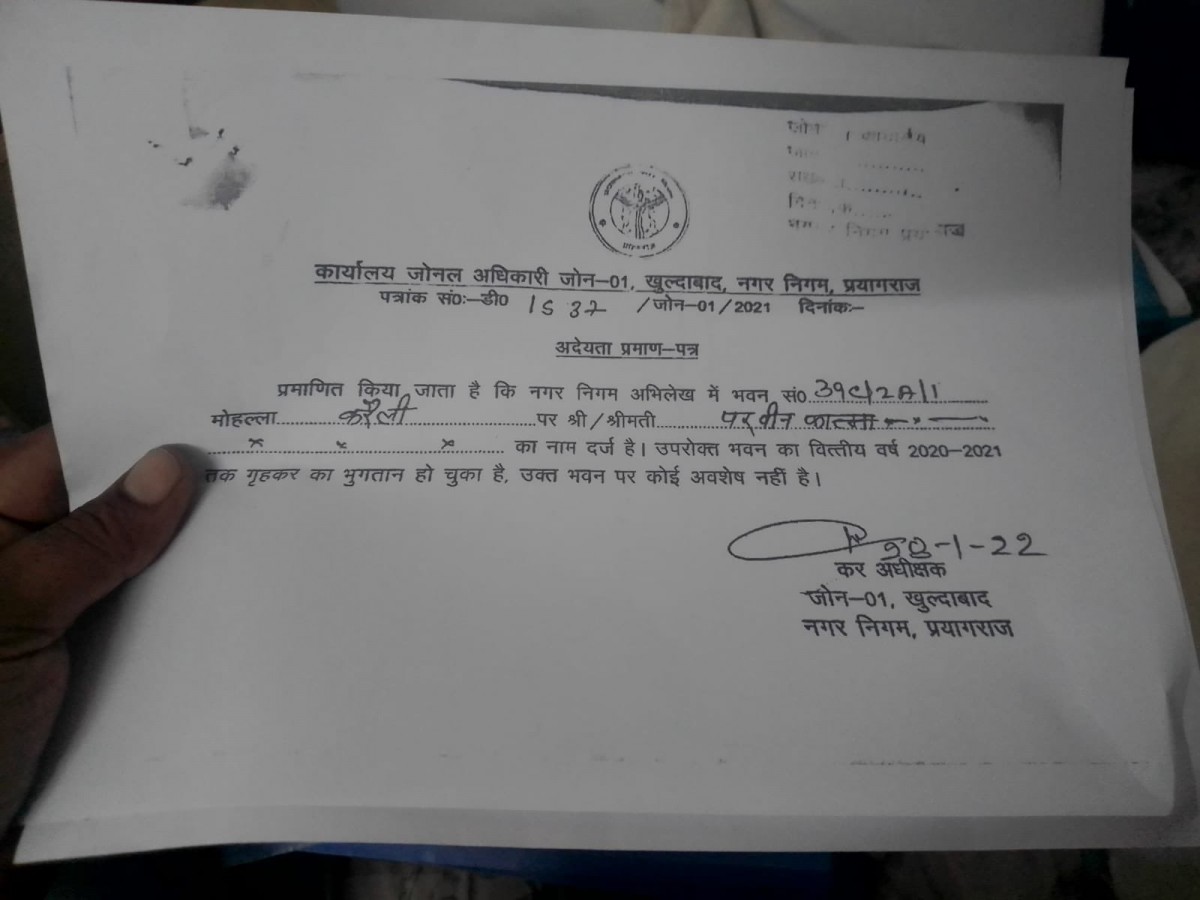 Document showing the house is registered in the name of Afreen Fatima’s mother. Photo: Special arrangement.

On June 11, student activist Afreen Fatima had put out an appeal on social media, writing to the National Commission of Women highlighting safety concerns regarding her father.

Student leader @AfreenFatima136 says she is extremely concerned for the safety of her father, mother and sister, whose whereabouts are unknown to her. She claims that women and small children are being forcefully evicted from houses in the middle of the night.

Speaking to The Wire previously, Afreen Fatima said that two days prior to the violence a case was filed against her father under Section 107 (abetment) of the Indian Penal Code. She said, “Essentially, it meant that if anything was to happen in the city, my father would be held responsible for abetting it.”

Fatima’s brother told The Wire on Sunday that his mother and sister have been released from custody from Roshan Bagh area. As of noon, he said that bulldozers have reached their locality.

Police teams have reportedly raided locations to nab 10 of the “main accused.”

The list of accused persons issued by the police includes names of people who had been prominent in the anti-Citizenship Amendment Act protests of 2019. Others are leaders of the All India Majlis-e-Ittehadul Muslimeen, student activists and Left party workers.

Among those named are Imam Ali Ahmed of the Atala Badi Masjid, AIMIM district president Shah Alam and leader Zeeshan Rahmani, an activist who was active in the anti-CAA protests, Sara Ahmed, and Left leaders Ashish Mittal and Ali Ahmad.

Prayagraj ADG Prem Prakash, in a statement to the press, mentioned these names, and said that many others have been identified as having been behind this “well-planned” violence.

Samajwadi Party leaders have also reportedly been named by the police.

He captioned it, ‘Return gift to rioters’.

On Friday, UP chief minister Adityanath also called for unspecified exemplary ‘action’ against rioters so that those with ‘anti-social thoughts’ never again think of disturbing the peace.

Note: This is a developing story and will be updated when more details are available.