Policemen told the reporters to leave the area, saying they won't be able to provide protection. 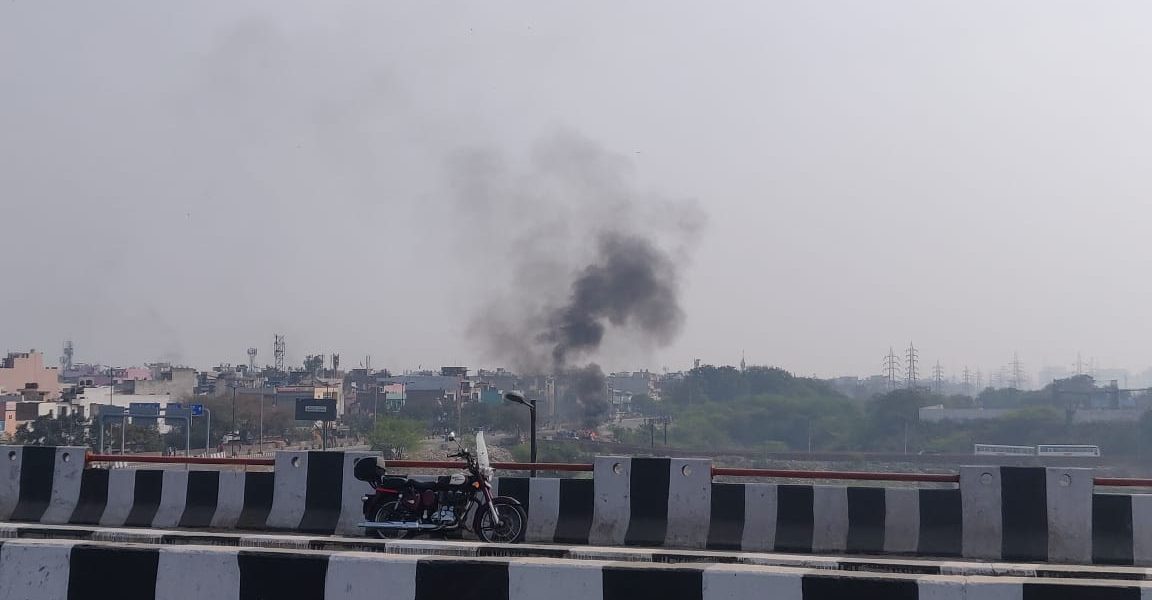 Fire visible from the highway. Photo: The Wire

New Delhi: At a chowk underneath the highway in North East Delhi’s Khajuri Khas, a mob shouting ‘Jai Shri Ram’ set buildings on fire on Tuesday afternoon, including a biryani shop. There was fire on either side of the highway.

Directly under the budge was a biryani shop, and Hindutva groups could be heard actively pointing it out and saying that it must be burnt because it sold biryani. Right across the biryani shop is an Agarwal Sweets – and that was left untouched.

On either side of the road, large groups of men wielding sticks were patrolling the streets, repeating the ‘Jai Shri Ram’ slogan again and again. Right next to them were large groups of Delhi policemen – not stopping the violent mob, but offering them water to drink.

While The Wire‘s reporters were able to shoot videos of the buildings being set on fire, they were threatened, their phones snatched and the footage and photographs deleted. “Tum toh humaare Hindu bhai ho, yeh sab kyun kar rahe ho? (You are our Hindu brother, why are you doing all this?)” one of the men as a reporter while deleting footage from his phone.

Policemen told the reporters to leave the area, saying they won’t be able to provide protection.

Three Muslim men, standing on the flyover, watched their shops being burnt. A pan shop was vandalised, a shop selling automobile parts was burnt.

Hindutva women were also in the streets with lathis, saying they would counter the women staging sit-in protests. Another older women, who didn’t give her name, told The Wire, “It’s important for Hindus to get out of their home and save the religion. Agar nrc lagoo nahi hua toh hum hi musalmano ko nikal denge (If the NRC isn’t implemented, we will get rid of Muslims ourselves).”

Muslim residents in the area are reportedly in hiding, fearing the violence and not trusting the police to keep them safe.

In the evening, the Delhi Police conducted a flag march at areas such as Bhajanoura and Khureji Khas. According to the news agency PTI, special commissioners of police Satish Golcha and Praveer Ranjan led the flag march.

“We are taking appropriate actions. The required force is being used. Tear gas and mild lathicharge has been used to control the crowd. We will detain the miscreants and appropriate action will be taken against them,” Golcha, who is the special commissioner of police (law and order northern range), said.