“I can’t go there, I will not go there, not that anyone over there [in their neighbourhood] is even bothered,” said Shaida who moved along with her family to a makeshift dwelling in Mustafabad after the riots. 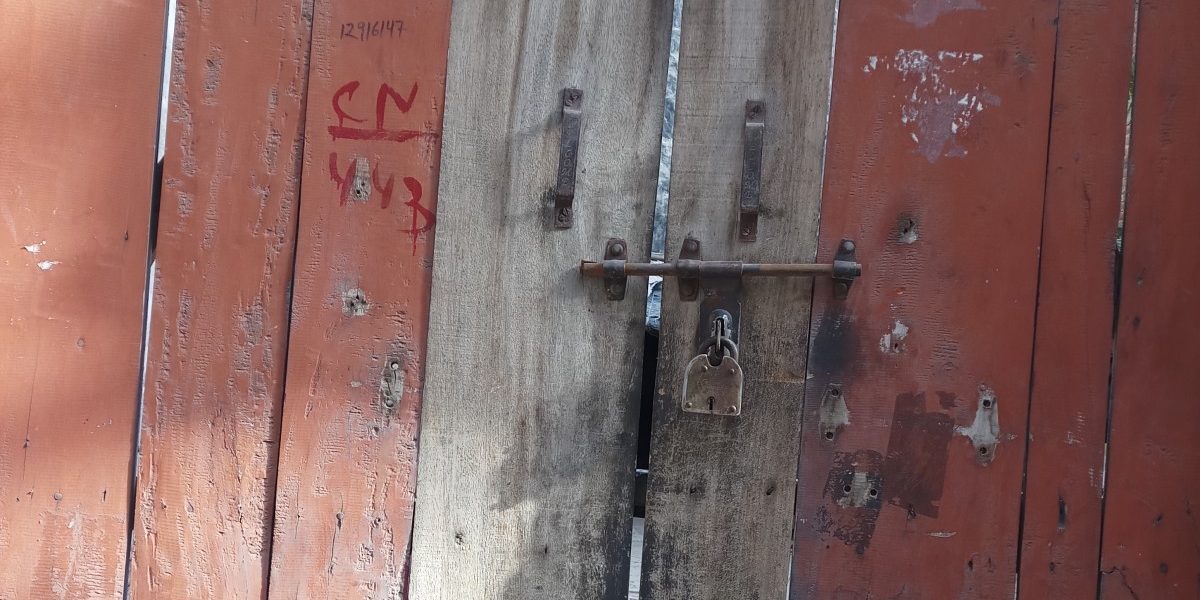 Locked up: the house of Irshad Ali and Shadia in Prem Vihar. Photo: Prabhjit Singh.

New Delhi: It has been three months since north-east Delhi was engulfed in a frenzy of communal violence.

Terror-stricken Muslim families fled their neighbourhoods to seek refuge in the locality of Mustafabad, in Loni (Uttar Pradesh). Meeting several of them one realised something important – be it families from streets 5 and 6 of Prem Vihar, which did not witness houses being set ablaze, or Shiv Vihar, one of the worst-affected areas in the violence, they were equally vehement about not returning home. Such is the fear psychosis that has been generated by the virulence of communal violence in north-east Delhi in February.

Irshad Ali, his wife and three small children spent the night of February 25 under a tarpaulin roof near a garbage dump in Loni, across the Delhi-Uttar Pradesh border. “After Anwar was burnt alive three lanes away, we were in complete panic,” said Irshad.

Subsequently, Irshad moved to a makeshift dwelling on his brother’s vacant plot in Mustafabad, which has a considerable Muslim population. His family was grateful that their neighbours let them use their wash-room every morning. Irshad’s wife Shadia said she washed their clothes at the community hand pump in the lane. 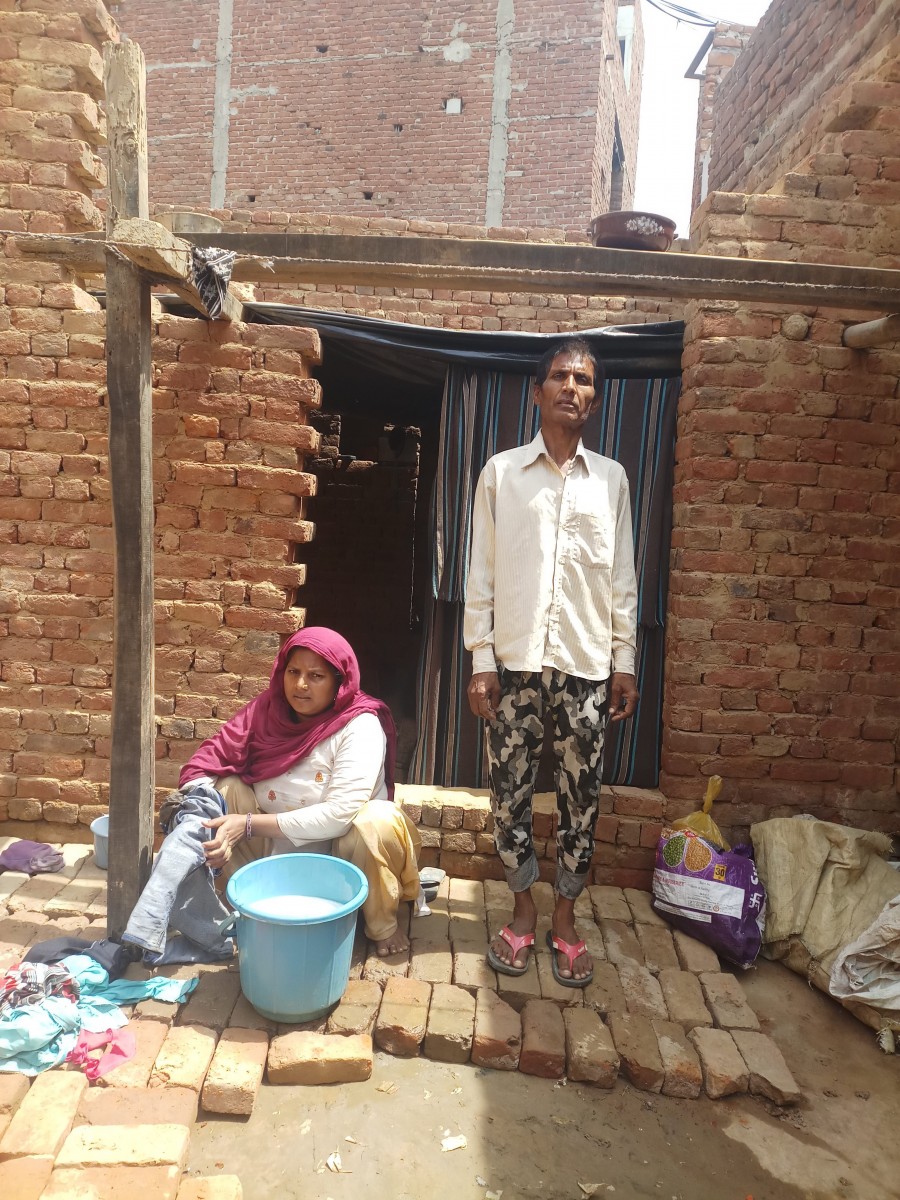 Their life was a far cry from their existence in their two-room house in Prem Vihar, which is locked up, but Shaida was adamant that they would not go back to the home they own.

“We lived there for more than 15 years and our three children were born there. We never imagined that the times would change to this extent. I can’t go there, I will not go there, not that anyone over there [in their neighbourhood] is even bothered,” Shaida said with moist eyes. 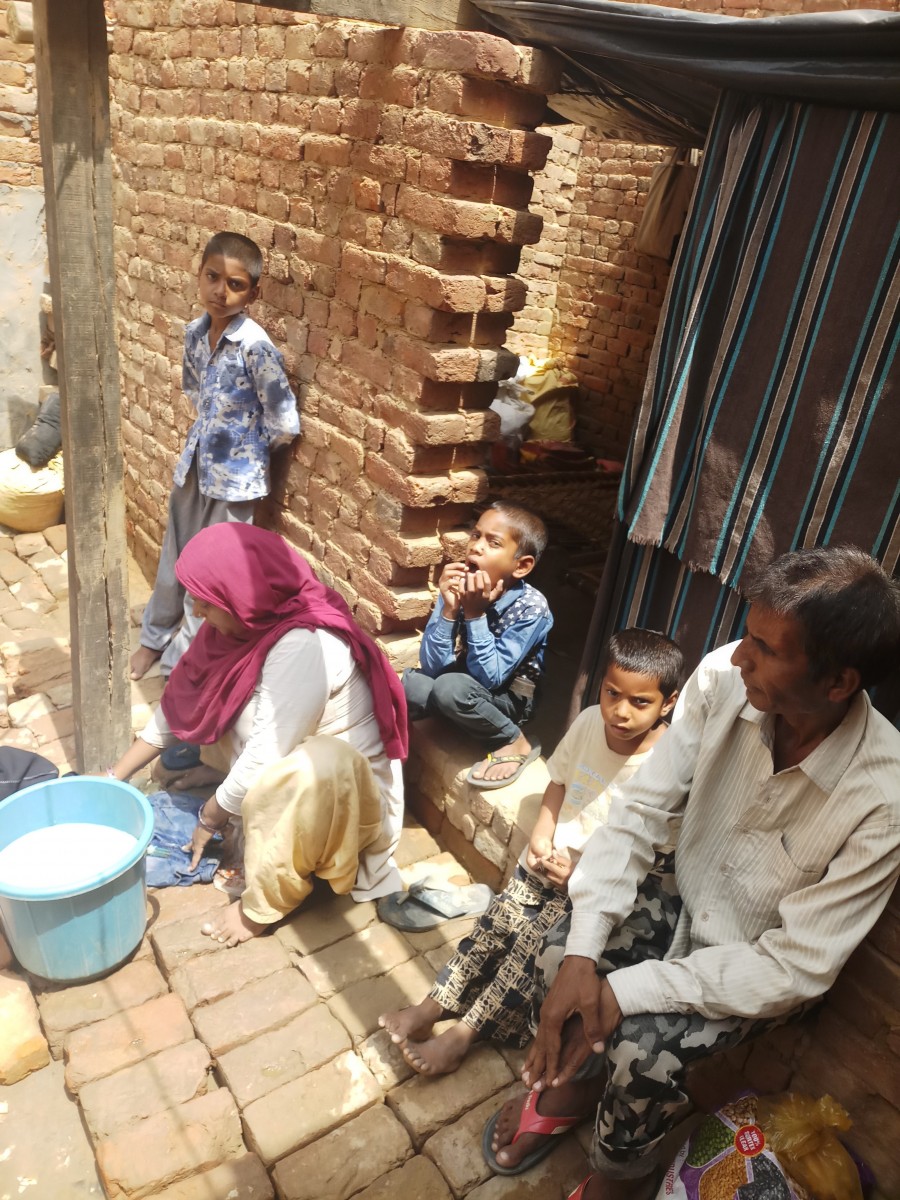 When they left their home in a hurry that night, they left behind Rs 20,000 in cash apart from jewellery for fear of being looted and killed on the way. Irshad mentioned that when he went back to his house two months later to collect their belongings, the only conversation a neighbour exchanged with him was whether he wanted to sell his house. “I was very perturbed at his query. I told him this was no way to talk when we were in trouble,” he recalled.

“I know that they wanted me to sell my house at a throwaway price, but I won’t budge even if we have to sleep hungry,” he declared.

Shaukeen and his wife Shehnaaz fled with their three children in the late hours of February 25 when they saw flames leaping up and heard frenzied shouts of Jai Shri Ram in their locality, Shiv Vihar.

“I was carrying my younger son in my arms and he was crying loudly, so I had to keep a hand over his mouth while we were fleeing along the nullah,” said  Shehnaaz. She also advised Shaukeen not to use the motorbike lest its noise attracted the mob.

In the cover of darkness, they walked for two hours, reaching the house of Shehnaaz’s mother, in Loni, at 2 am (February 26). They too have no intention of returning to their three-storey house-cum-work space in street number 10, in Shiv Vihar.

Shaukeen, a tailor by profession, said all his sewing machines were burnt outside on the street, and his house on the upper floor looted.

“We jumped across to the second-floor terrace of our Hindu neighbours. Expressing their helplessness in resisting the armed mobs, they ushered us through their house so that we could reach the back lane and escape,” he recounted.

Shaukeen was ready to open his shop on the ground floor if he was able to get financial help. What he ruled out completely was bringing his family back home.

The troubled universe that Irshad and Shadia, and Shaukeen and Shehnaaz inhabited in Mustafabad, had other constituents as well – Afsana and her rickshaw-puller husband, 22-year-old Imran and his old mother, health worker Mehrazuddin, who works as a ward attendant in a private hospital, and young Shahid Ali, a barber.

Shahid said he had started looking for a place in Loni where he could set up shop. “The owner of the shop in Shiv Vihar flatly refused to rent it out to me,” he stated, adding that while his shop was looted, it was not set ablaze because it was owned by a Hindu.

This correspondent visited streets 5 and 6 in Prem Vihar to see how neighbours spoke about the absence of Muslim families from their streets.

On street number 5, I approached Irshad and Shadia’s elderly neighbour. “Humein kuch nahi maloom bhaiya, na hi humse koi baatcheet hai (I don’t know anything, nor were we on talking terms),” he said indifferently. “Bas yehi ek Muslamaan tha iss gaki mein (He was the only Muslim in this lane),” he commented.

On street 6 was Shahnaz who had come to her three-storey house for the first time in three months, to pick up some clothes and other belongings. What escaped her lips was the emphatic statement, “No, we will not live here anymore.” 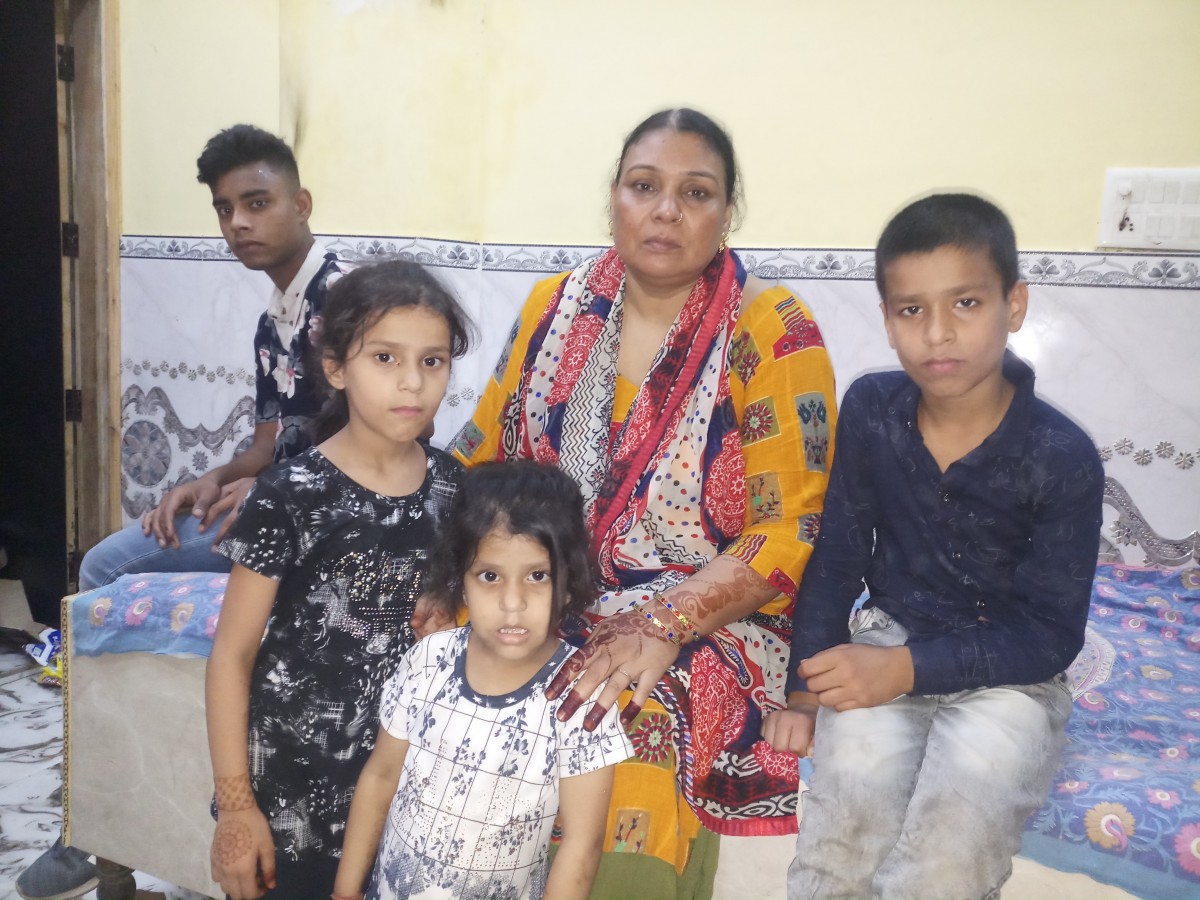 Shahnaz went to her house in Prem Vihar with her grandchildren for the first time after leaving, to pick up some clothes. She could not see herself coming back. Photo: Prabhjit Singh

She pointed out her neighbour, Satish Kumar, to this correspondent, saying “I am indebted to him for dropping us at our relatives’ place.”

Satish, who was listening to our conversation, was quiet. His eyes expressed the sadness he could not articulate.

Just opposite Shahnaz’s house was the house of Shahana, a widow who seemed to be in her 50s. She had decided to return home. When she asked me in, two young men followed me in and sat down.

“Aap inhi se pooch lijiye, inhe mere bete hi samjho (Why don’t you ask them? They are like my sons only),” Shahana told this correspondent with a nervous look.

She told me that she wore a saree and applied ‘bindi’ on her forehead while fleeing with her 22-year-old son during the violence in February. “I am thankful to these two sons who dropped us at my sister’s place close by,” she said.

The two men introduced themselves as Sudhir Raghav and Deepak Chauhan. Sudhir said, “She is like our mother, we grew up in front of her.” 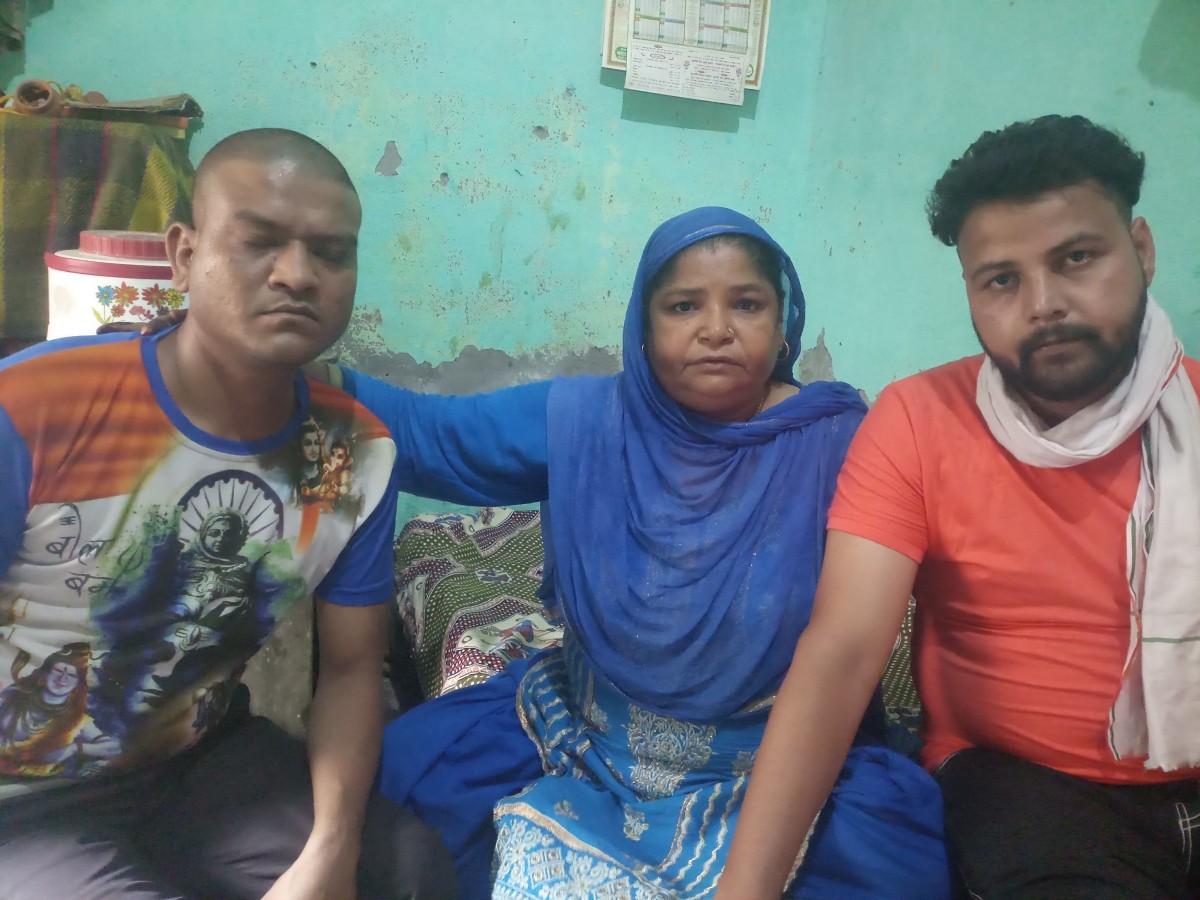 Shahana, a widow who returned home to Prem Vihar, flanked by Sudhir Raghav and Deepak Chauhan who stay nearby. Photo: Prabhjit Singh

“We were the first family to settle in the area “some 40 years ago. It was lonely – ours was the only house on the street,” Shahana told me.

When I asked her for her son’s contact number, she was evasive. Her eyes darted to the young men before turning to me as she mumbled, “He comes home very late.” It wasn’t clear whether her son was staying with her.

What kind of a homecoming was this? I wondered.