'We Burnt the Mazar Down': Hindutva Men Talk About the Violence They Unleashed

"Are they [Muslims] bigger goons than us? We are the bigger goons. We will show them their place, not allow them to remain (even) in their homes." 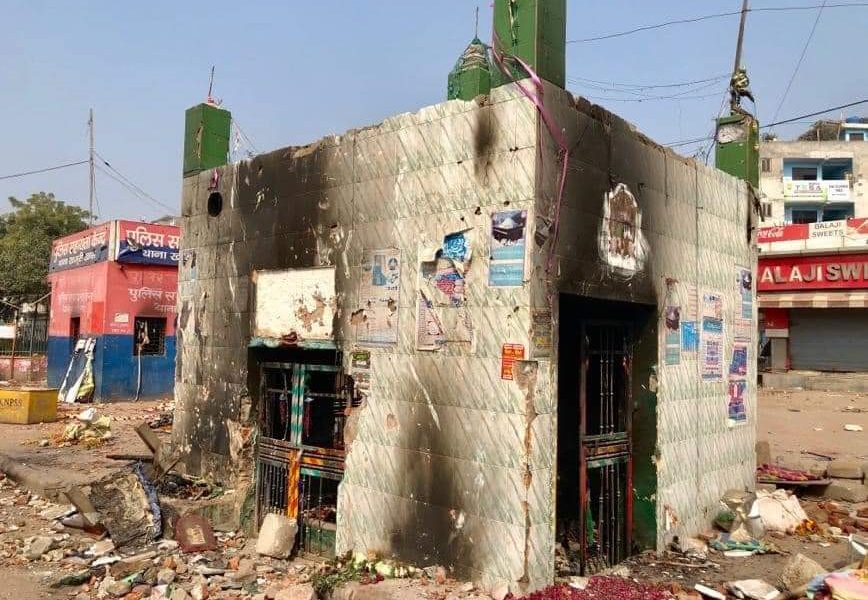 The mazar that was burnt down on Monday. Photo: Twitter/belaltweets

New Delhi: Since Monday, North East Delhi has been on the boil. Hindutva mobs have unleashed large-scale violence against anti-Citizenship (Amendment) Act protestors, and there has also been violence and stone-pelting from the other side.

Shots have also been fired in some parts of the district. Several shops and homes have been vandalised and set on fire, and vehicles have been torched.

The violence has led to the death of at least seven persons and more than 100 have been injured. The situation remains volatile, with armed mobs patrolling the streets and continuing to torch homes and shops.

The Wire met with a pro-government Hindutva mob and spoke to them about the violence and their modus operandi.

They agreed to talk “if the camera is not focused on our (their) face”.

Why are you opposed to those opposing the CAA?

Our opposition is to the opposition of those against the CAA. How dare they (read Muslims) protest like this in our country? Is it (their) country? It is our country. Are they bigger goons than us? We are the bigger goons. We will show them their place, not allow them to remain (even) in their homes. Houses have been burnt, a hospital too.

Yesterday, a majar (mausoleum) has also been burnt in the area. Who did it?

“We don’t know who did it,” one of them said. “Maybe, the Muslims have done it themselves,” another young man said.

Yet another added, “We can even give you the names of those who did; we know them very well. Okay, we will not tell you. We have burnt it (the mausoleum); we all have burnt it. Keep the camera down. Not one person has burnt (it); we all have.

So you all are opposed to those who have blocked roads to protest against the CAA?

CAA and NRC (National Register of Citizens) must be implemented. If the government asks for our citizenship, we will show them (documents). Those who are not scared (of youth like them) are mad, fools, uneducated, can’t understand anything.

The protesters are saying that the Muslim community is not among (the six communities) mentioned in the CAA.

You have watched Bajrangi Bhaijan (the film where the hero Salman Khan enters Pakistan illegally)? Like that, these (the Muslims) too have entered (India). You may also know what is happening to our Hindu mothers and sisters there (in Pakistan). We will keep our countrymen (Hindus) here. Why will we keep them?