Having seen their children traumatised by the vandalism and violence during the riots, parents from the Muslim community say all they want is the safety of their kids, and quality of education can take a backseat. 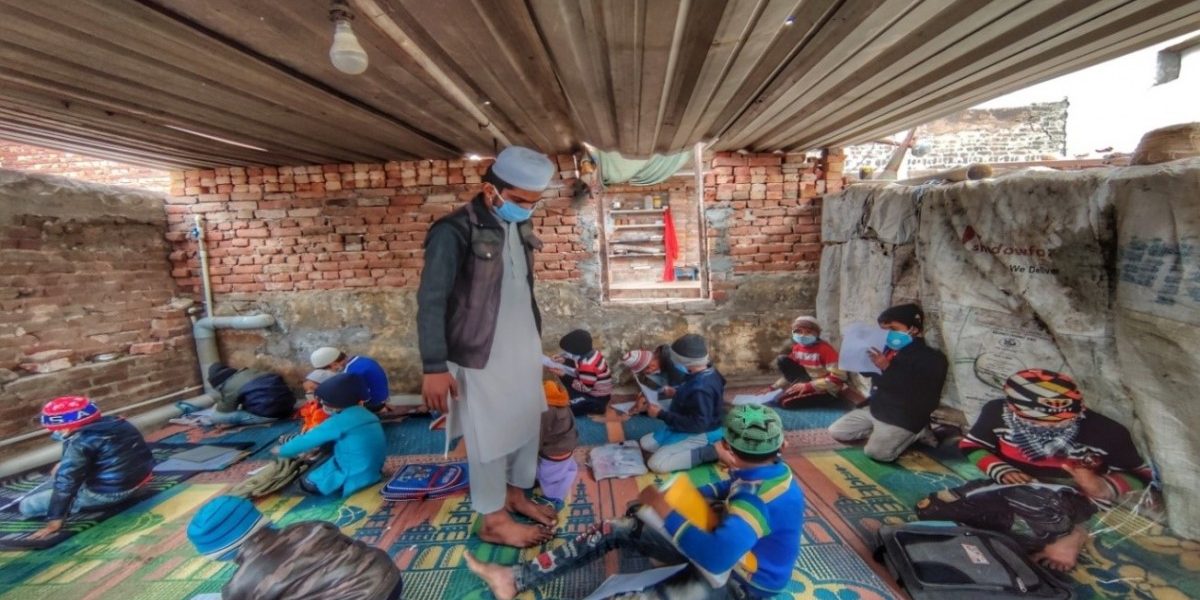 New Delhi: When the Assam government approved a proposal last month to shut down about 600 madrasas (Islamic schools) in the state, Muslim children and their parents, still terrified by the anti-Muslim riots that had taken place in northeast Delhi in February 2020, began to feel trapped. Now even their last resort for a good education seemed to be in danger.

In the past one year owing to a number of instances demonstrating clear targeting of Muslims – the Citizenship Amendment Act (CAA), which is distinctly anti-Muslim; the riots that followed protests against the CAA, which made them fearful of communities other than their own; the pandemic that closed schools; and the lackadaisical manner in which the Delhi Police has been conducting inquiries into the riots – children from the community in northeast Delhi have increasingly been dropping out of government, public and private schools and joining local mosques and madrasas instead, for the sake of safety and some peace of mind.

Fifteen-year-old Mohammed Talib, for instance, had been enrolled in a government-run senior secondary school in Karawal Nagar and was due to take his board exams, but dropped out to join a madrasa, because both his school and his coaching classes are located in Hindu-dominated areas.

During the riots, Talib had been badly bruised on his left leg and other members of his family had been hurt when a mob claiming to be ‘Ram bhakts’ (believers in Ram, an avatar of Vishnu, the Hindu god who protects and preserves the universe) pelted his house with stones.

Also read: Communalism and COVID-19 Have Changed the Classroom for Indian Muslim Children

As classes continued at the madrasa, a dimly-lit room sheltered by tin sheets, and boys ranging in age from nine to 15 swayed back and forth while reciting the Surah Qariah from the Quran, Mohammed Shahrukh, a student from Johripur, recalled witnessing the riots from their terrace.

“Ab madarase mein hi parhunga, yahan safe lagta hai, ab Hindu bacchon se darr lagta (Now I will only go to a Madrasa, I’m scared of Hindu children),” says Shahrukh, explaining that the public school he had attended earlier had a majority of Hindu students and was located in a Hindu-dominated area.

Though a Hindu friend apologised to him for the riots, Sharukh believes that their friendship will never be the same, because even the sights and sounds of temples, Bhagwa flags and Hindu chants send him spiralling back to memories he do not want to revisit. A 14-year-old, Shahrukh says he now feels more Muslim than ever, not because he is a believer but because his community was targeted.

‘The children here are our kind’

Abdul Rehman, a student who quit a public school in Karawal Nagar, says he never wants to go back to that school, and only wants to study among Muslims now. Aged 11, Abdul says, “I saw masked men setting houses on fire, throwing stones. I was very scared and didn’t go out to play for months.” 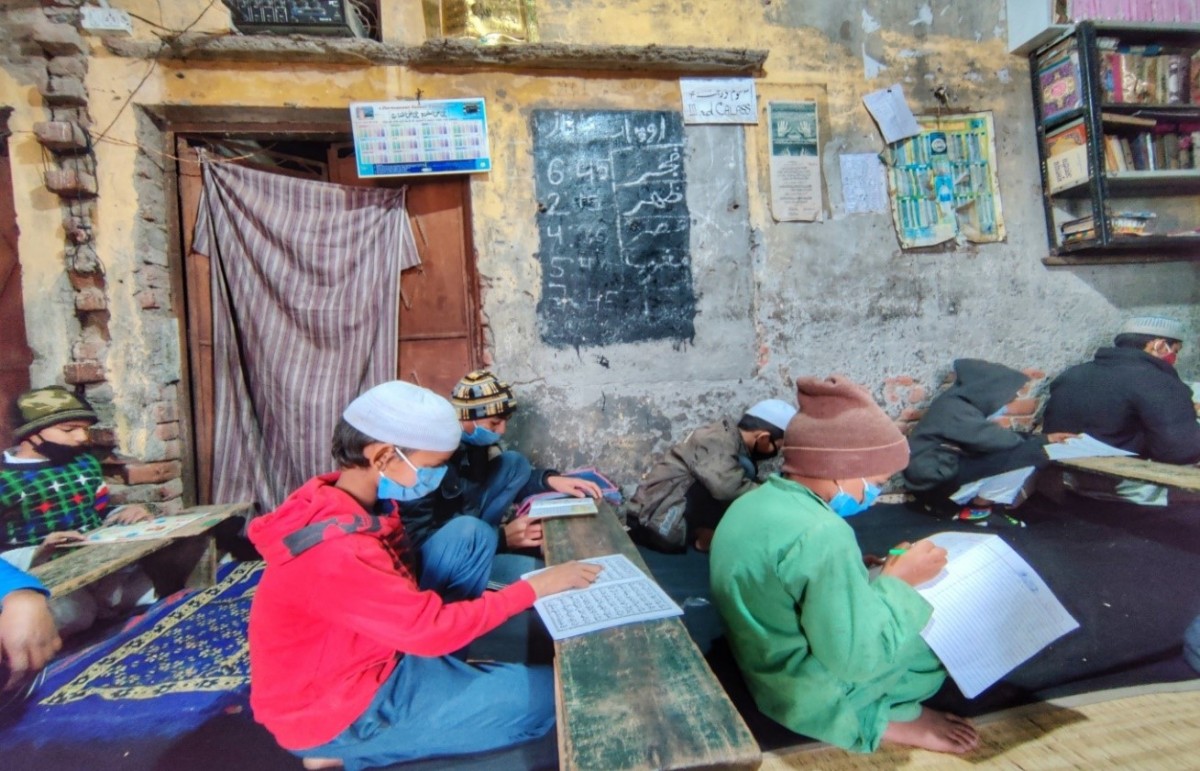 Students at a madrasa in Shiv Vihar. Photo: Tarushi Aswani.

Maulana Mohammed Akbar, head of the Madrasa Islamia Arbia Miftahul Quran, says that most of the parents who send their children to his madrasa are more concerned about the children’s safety than their education. While the madrasa does offer English, Maths and Hindi in addition to Islamic subjects, but that is not the primary concern of parents.

The madrasa was also attacked during the riots and reopened only a few weeks ago, catering to its regular students as well as many new school dropouts.

Aliya Saifi, a 13-year-old former student of the S.E.S. Public School, Shiv Vihar, says that after rioters burned her father’s cycle repair shop, the family didn’t have enough money to continue sending her to school.

Aliya faintly remembers the mob that attacked her father’s shop, many of the men wielding swords and petrol bombs. Her only question is: “Jab humne kuch kiya hi nahi kisi ko toh humri dukaan kyu jalaai (We didn’t do anything to anybody, so why did they burn our shop)?”

Her classmate at the madrasa, 14-year-old Simran Hanif, quit the government school in Sherpur. Simran’s memory of the riots is mainly to do with the horror of fire, the utter chaos that prevailed on the streets and in the colonies of northeast Delhi and the painful sounds of shrieks. She says she feels safer at the madrasa than she might have felt at her old school since she believes the students here are her ‘kind’.

During the riots, Tayyaba Masjid in Lal Bagh Mandi area was torched and severely damaged. Rioters apparently even burned copies of the Quran in the masjid. Now renovated and ready to welcome believers, its madrasa has more students than it did before the riots. The masjid’s Imam, Abdul Khalid Qasmi, says he has noticed an interest among children to join Quran lessons since last year. 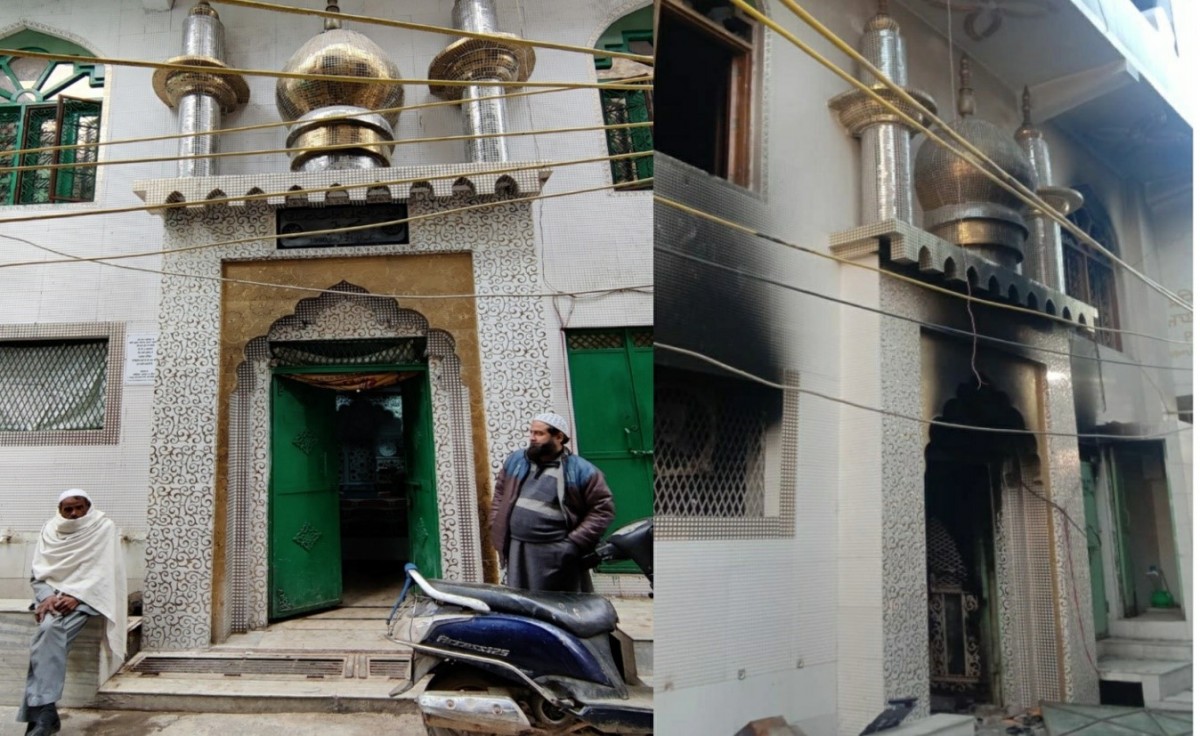 Tayyaba Masjid now (left) and during the riots (right).

Rehan, a 13-year-old, who quit Bhagwati Memorial Public School in Karawal Nagar after the riots, regularly attends Quran lessons at Tayyaba Masjid. His grandfather claimed that there has been a very drastic change in Rehan’s behaviour since the day he saw his house being torched by rioters.

“Rehan has become anxious since then. On Diwali, when Hindus chanted slogans in the lanes, he frantically shut all the doors.”

Mohammed Usman, a nine-year-old who opted out of a government school in Karawal Nagar explains that he had always disliked going to school because the Hindu children taunted him for being a ‘mullah’ (literally a learned Islamic scholar, but used as a pejorative in this case).

The boy is now terrified of being identified as a Muslim. He is sure, he says, that his classmates from his earlier school would tease him even more now if he had continued in that school after the riots.

While most of the children who have newly joined the madrasas clearly express how they feel more vulnerable in the presence of Hindu children, a few also had to leave their schools because of a lack of money after their homes and family-owned shops were reduced to ashes in the riots.

With little or no social security and diminishing cultural currency, even those Muslims who wanted a modern education have been forced by the anti-Muslim activities now prevalent in the country to step back into ghettos and restrict themselves to madrasas.