A fact-finding report released by health activists says Muslims feared for their lives while being taken to hospitals, and that ambulances were stopped by mobs and police alike. 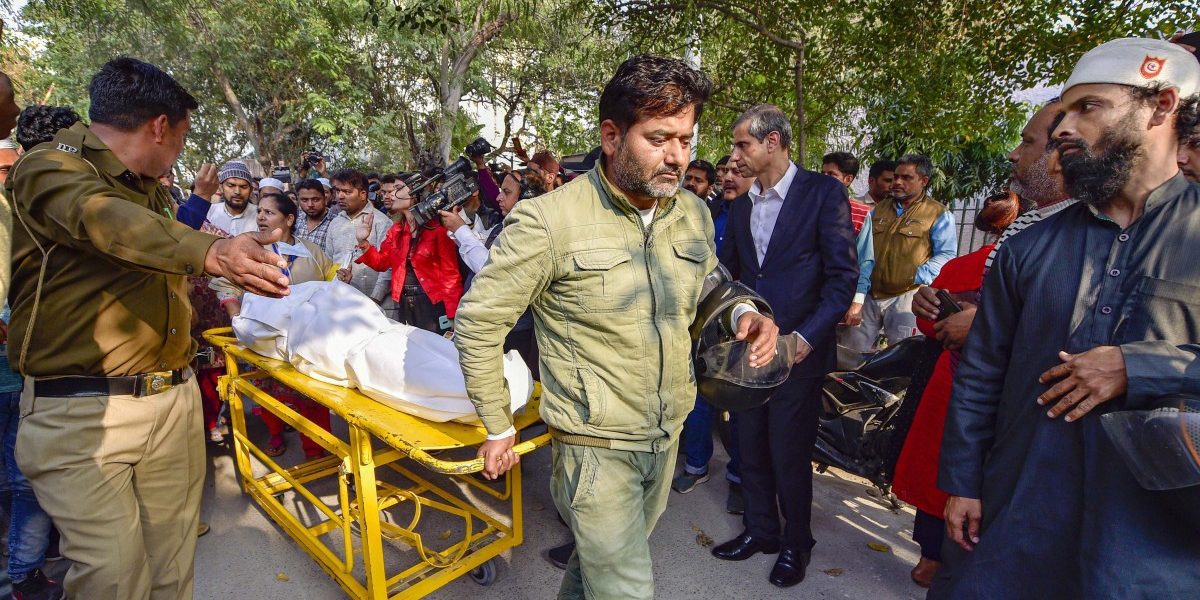 Mohd. Irfan's family carries his body to the mortuary at GTB hospital in New Delhi on February 27, 2020. Photo: PTI/Vijay Verma

New Delhi: Civil rights and health activists, who visited or worked in the violence-affected areas of North East Delhi, have accused the Centre and the Delhi government of not protecting the lives and properties of people and thereafter being slow in providing relief and rehabilitation.

They have also accused the Delhi government of not providing proper healthcare to the victims and its leaders of not taking any action on the ground to instil confidence.

A detailed report on ‘The Role of Health Systems in Responding to Communal Violence in Delhi’, prepared by Inayat Kakar and Sana Contractor, was released at the Press Club on Monday. While delivering its main points, Inayat said their interaction with the victims had revealed many shortcomings.

Patients had difficulty in changing hospitals

To begin with, in many cases, the main government hospitals – GTB in North East Delhi and JPN in Central Delhi – to which many of the injured were taken, did not provide proper treatment. “It were to these hospitals that the patients were first brought. But for many of them, getting access was very difficult. There was denial of healthcare – especially where patients went to one hospital and later wanted to shift to another.”

The health activist said many of the victims complained that they did not get their treatment records and MLC numbers and subsequently had difficulty in getting admission at a different hospital.

Inayat insisted that in charitable and private hospitals, there was no free care even though the Delhi government had said that the Farishtay scheme would be extended to them.

She also charged that the care received by the patients was very hurried, and there were instances where the “full range of injuries were not recorded and treated”.

The group also accused the police of interfering with the treatment. “At JPN hospital, the police was inside the hospital and told patients that they should go elsewhere – people were also unable to get assistance from 102. Many chose small private clinics within their own colonies.”

She also charged that a number of victims “faced derogatory and communal remarks from staff members”.

Also read: Lessons From Arvind Kejriwal’s Response to the Pogrom in Delhi

Disease spreading among displaced due to congestion, unhygienic conditions

At Mustafabad, the team said there has been displacement of families from their houses and with many taking refuge with their relatives, “diseases are spreading in community due to congestion and lack of hygiene”.

The group demanded that there is a “need for the Delhi government to reach out”. It said while the government said mohalla clinics will remain open till 4 pm., Mustafabad has none and so medical vans and teams are needed there.

The health activists demanded that the government should immediately provide necessary documents, MLCs and care to the victims and coordinate efforts to trace the missing.

Harjit Singh Bhatti, who was earlier with AIIMS and is now national president of Progressive Medicos & Scientists Forum (PMSF), recalled how during the violence ambulances and doctors faced difficulty in reaching the victims, especially those from the Muslim community.

He added that the police made their task even more difficult by stopping the ambulances repeatedly. “In once case, while we were shifting a gunshot victim to GTB hospital, they stopped us four times and made us remove his bandage and show the bullet everytime”.

He said a number of victims of gunshot injury were taken to Al Hind Hospital on February 25 afternoon but they could only get proper treatment after over 12 hours as ambulances and doctors were prevented by mobs from reaching them.

Bhatti said at Al Shifa hospital in Okhla, he learnt that many of the patients were not treated properly in government hospitals. He said the violence has exposed India’s poor health care system.

Civil rights activist Anjali Bhardwaj who along with other activists visited the violence affected areas on Saturday said they had started from Bhajanpura where houses of Muslims were gutted. “People said no one from the government had reached out to them. They had no idea about compensation that the Delhi government has announced.”

She said one scary aspect which emerged is that “when we asked them if they had filled forms for compensation – they went into a shell fearing that they would become a part of National Register of Citizens.”

Bhardwaj said the Delhi government needs to act quickly as many people have taken shelter at the homes of their relatives. “At Chaman Park saw nearly a 1,000 people displaced from their houses in Shiv Vihar. They were in private homes.” 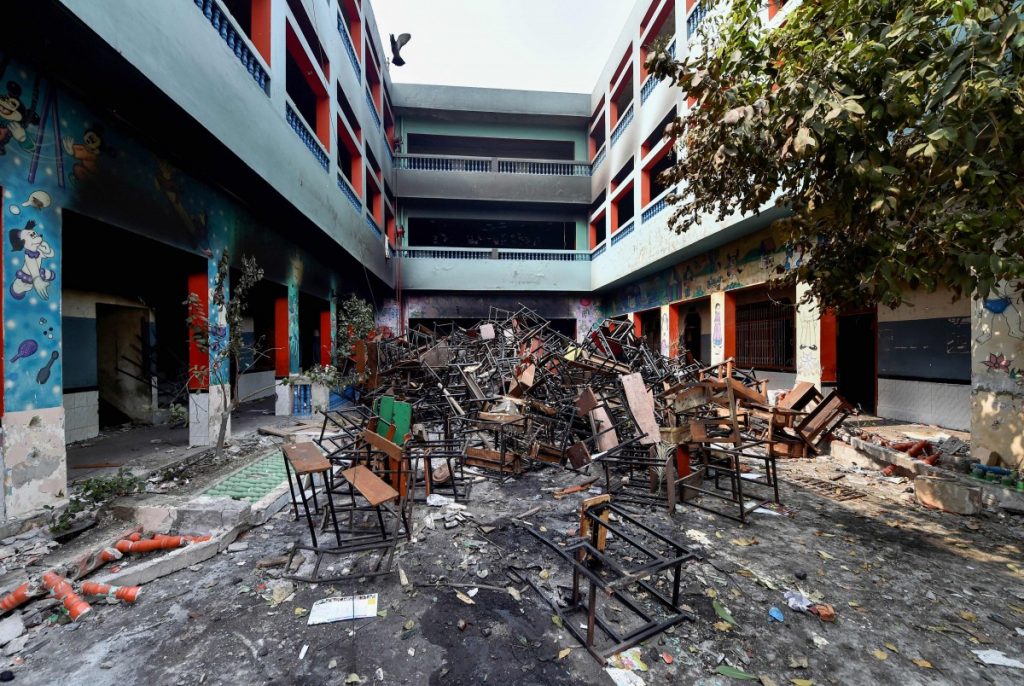 ‘Shelters for victims should not be gender specific’

She said after the release of their report, while Delhi government has announced that nine night shelters would be provided to house the victims of violence, the fact remain that eight of these were in tents and only one is in a proper building. Also, she accused the government of ignorance saying only three of these shelters were for all genders. “They should realise that in such a scenario women would not feel safe living away from the male members of the family.”

She demanded that Delhi government officials and public representative should go to the affected areas to restore confidence of the people, and that the compensation compensation process be kept simple.

Annie Raja of the National Federation of India Women, who was also part of the fact-finding team, noted that in a number of places, they saw that shops with ‘Jai Shri Ram’ written on them had not been damaged.

She said women and children were concerned about loss of books and examinations. Raja lamented that Aam Aadmi Party MLAs or government did not reach out to the victims. “They can’t just take the plea that the police is not under them. We demand immediate rehabilitation action from the State and Centre,” she said. 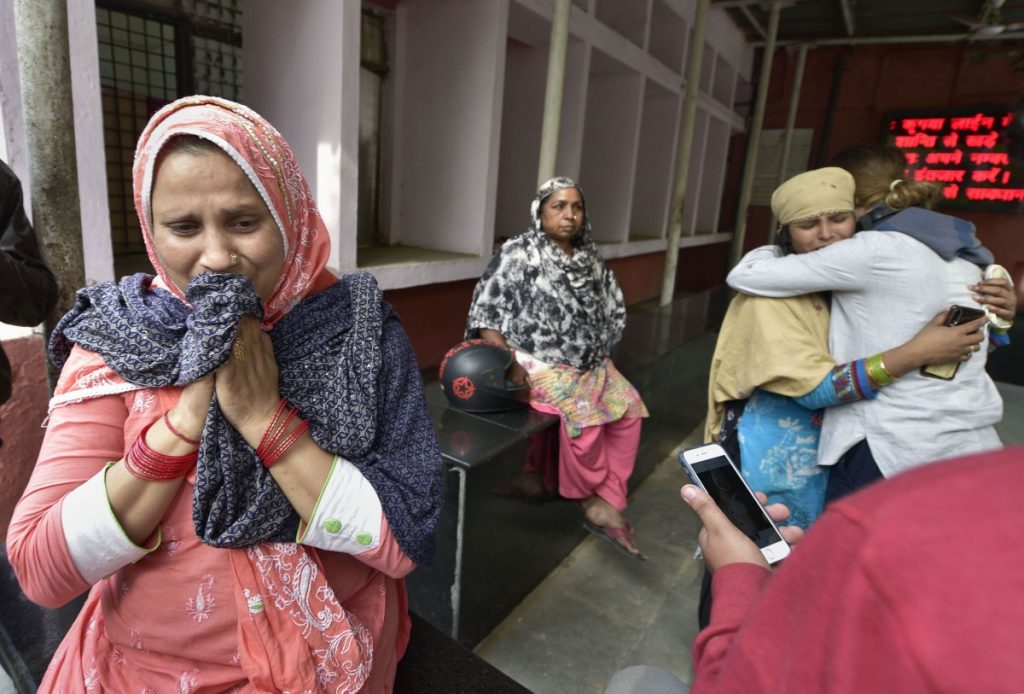 Azra Khan weeps as she waits to receive the body of her nephew Ashfaq Hussain outside the mortuary at GTB hospital in New Delhi on February 27, 2020. Photo: PTI/Vijay Verma

‘Delhi government did nothing to supply milk, vegetables’

Another activist, Poonam Kaushik, said that the “Delhi government is seen on Twitter and in newspapers but not on ground”. She said while chief minister Arvind Kejriwal has accused the L-G of stopping his files, “but on issue of relief LG is not stopping anything”.

Kaushik asked what Delhi government was doing when milk is selling at Rs 150 per litre in affected areas. “The DMS and Mother Dairy belong to the government and so does Safal which supplies vegetables, but people are not getting any supply at reasonable rates.”

Noted activist Harsh Mander who had moved Delhi high court for urgent intervention when violence had just begun said it was a “time of great pain suffering and shame. All institutions have failed the riot affected.”

He said this included the entire political class. “One section fostered it (the violence), another is playing cynical class of silence and one is showing moral timidity. None of them are coming out the way they should.

Mander said the problem arose because “police did not act and detain people for hate speeches; they did not control the riot and allowed it to go on for days.” This, he said, happened despite Delhi having the second largest number of police personnel after Jammu and Kashmir.

He said the “the fear of Muslims to go to a public hospital is an indictment of the public health system”.