‘How to Prove We Are Not Bangladeshi?’: In Aftermath of Delhi Riots, a Frenzy Over Documents

While some have lost their documents in the violence, others are worried government officials will disguise themselves as relief workers to conduct the NPR. 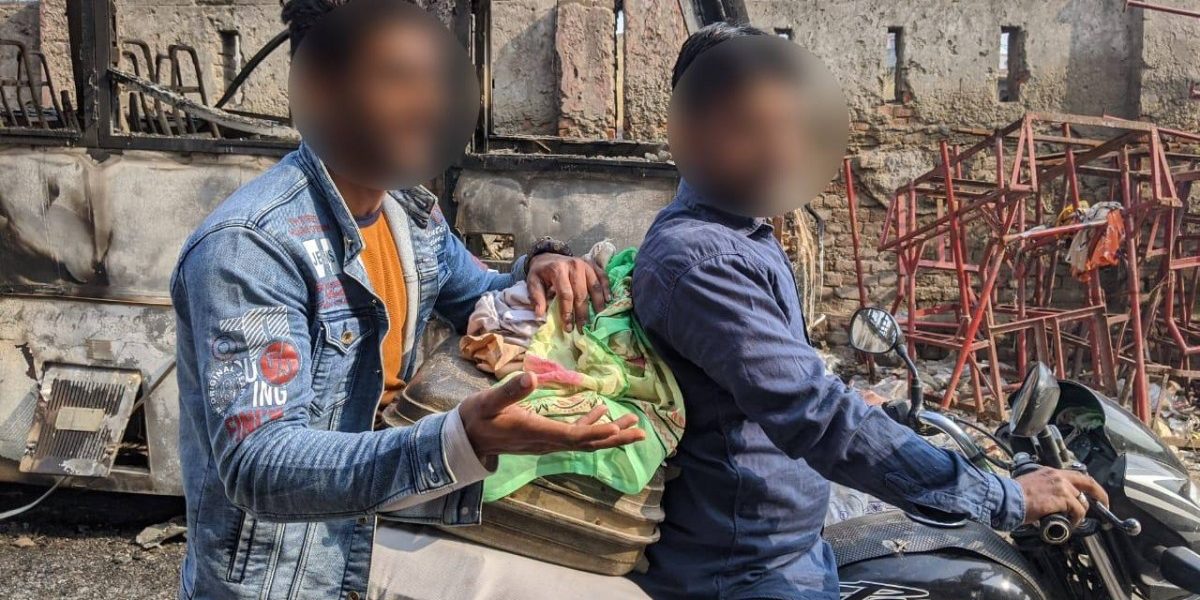 Mohammed Akbaruddin* and his brother leave Shiv Vihar with their suitcase of documents and a few clothes. Photo: Jahnavi Sen

New Delhi: Twenty-year-old Mohammed Akbaruddin* has come back home for the first time in five days. Along with the rest of his 11-person family, Akbaruddin fled Shiv Vihar’s Phase 7 on Tuesday (February 25), when a mob which arrived in a bus bearing petrol bombs, swords, stones and batons invaded the streets and wreaked havoc in the area.

Even now, he hasn’t come back for long. “I will head back (to my relatives’ house in Muslim-majority Mustafabad) again as soon as I get my documents out,” he says.

When violence broke out on February 25 and they had to flee, Akbaruddin tried to protect the family’s most precious assets – their documents. “I quickly collected everyone’s birth certificates, Aadhaar cards and voter ID cards, and hid them in the latrine,” he says.

In three short sentences, he explains why that was his first instinct.

“Hamara sab kuch document hi to hai. Ek document hi humari pehchan hai. Document nahi rahega to hum bhi nahi rahenge (Documents are our everything. Our identity is based on just one document. Without documents, we will cease to exist).”

Fortunately, the documents survived the violence. Relieved, Akbaruddin has placed them carefully in an old, worn silicon suitcase. His house did not suffer much damage; most of his belongings are intact. But the first thing he goes looking for are the documents.

“Yeh sab document ki wajah se hi to ho raha hai (This is all happening because of the documents),” he says, referring to the riots in his area which broke out early last week, when mobs egged on by Hindutva groups and leaders like the Bharatiya Janata Party’s Kapil Mishra launched a violent attempt to ‘clear’ anti-Citizenship (Amendment) Act protest sites in North East Delhi. 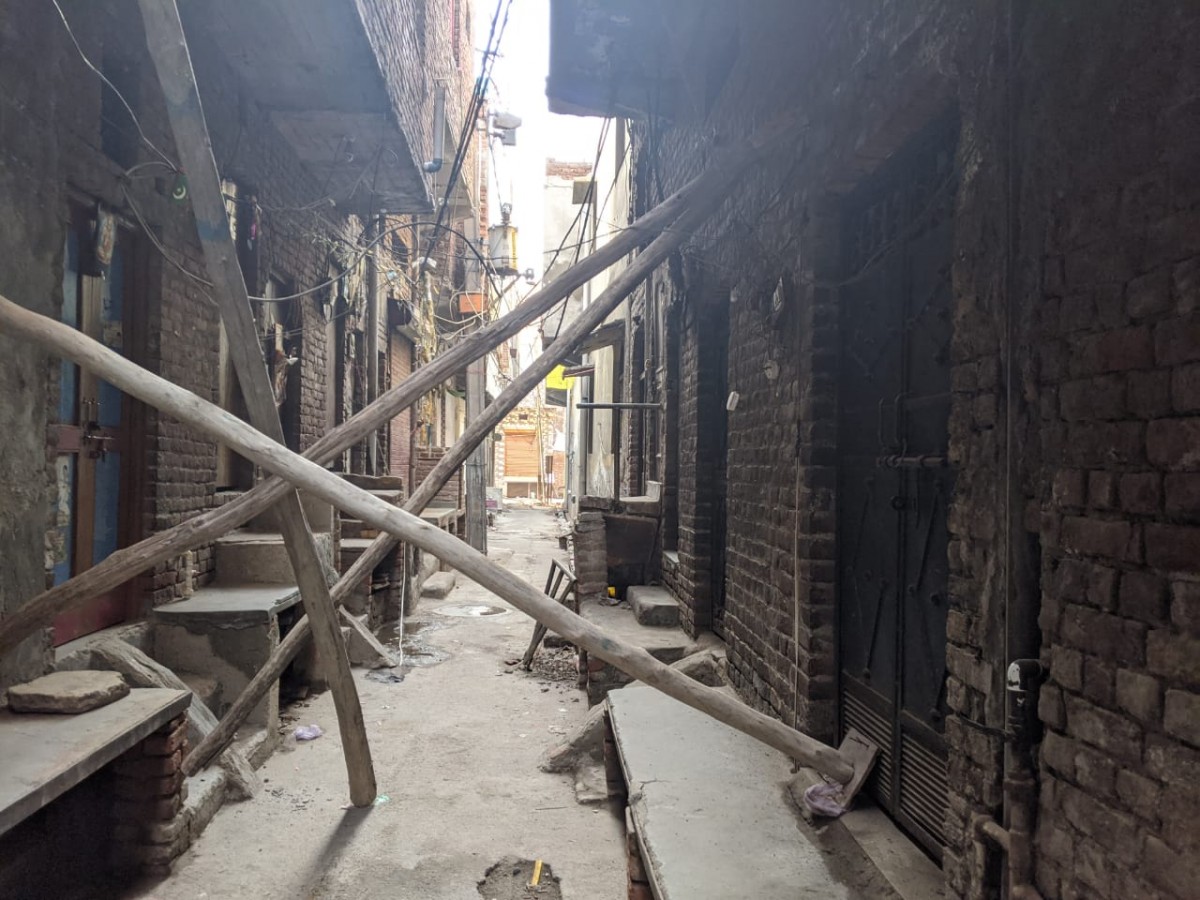 The lane where Akbaruddin’s house is. Photo: Kabir Agarwal

The protests that have broken out across the country after parliament passed the law oppose not only the Act, but also the linked National Register of Citizens (NRC) and National Population Register (NPR). If implemented, these exercises will put the onus on residents to prove their citizenship, using documents like the ones Akbaruddin was protecting.

“I have to rush now. It’s still not safe to be here,” he says, climbing on to a motorcycle. He drives away with his brother, the suitcase of documents tucked carefully between them.

The lane his house is in is entirely empty, with an improvised barricade in the middle possibly to keep the mobs out. The houses have not sustained massive damage, but most are locked. Some houses display Hindu imagery prominently, such as portraits of Ganesh and Krishna.

Also read: ‘Normalcy’ Returns to a Corner of Delhi, But Fear and Grief Are a Step Away

Near the lane, a few metres down, a couple stands outside their completely charred and vandalised home. They saw houses next door being burned by the mob and ran for their lives. “We didn’t have time to take any belongings,” says Mohammed Fazal*.

Inside the one-room house, everything has been burnt. Next to a charred stove, a kadhai lies with burnt tomatoes and a spatula beside it. “My wife was making chatni for us to eat with roti. I had not been able to buy vegetables that day,” he says.

“The television, the refrigerator, everything has been destroyed. All we have left are the clothes we were wearing and the documents that I was carrying,” says Fazal. 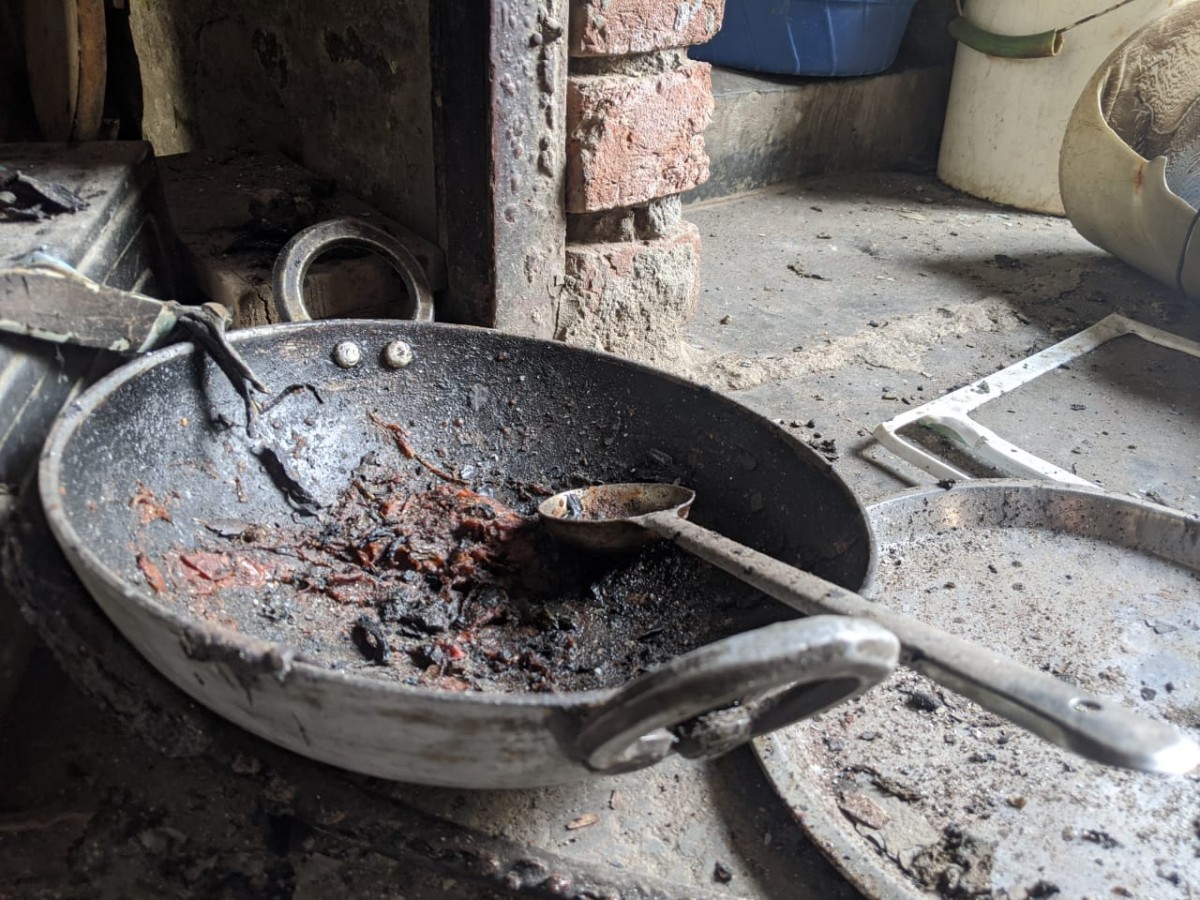 He always carries his Aadhaar card and driver’s license in his wallet. Those have survived. But every other document they had – including his wife’s Aadhaar card and voter ID card, and all documents of their three children – have been burnt.

“All their identity cards and documents were at home. Now nothing remains,” he says. “How will we prove that we are not Bangladeshi?”

The question is rhetorical – he is a Hindi speaker, not a Bengali one – but no one knows how the NRC process will play out, especially for those citizens who don’t have documents. 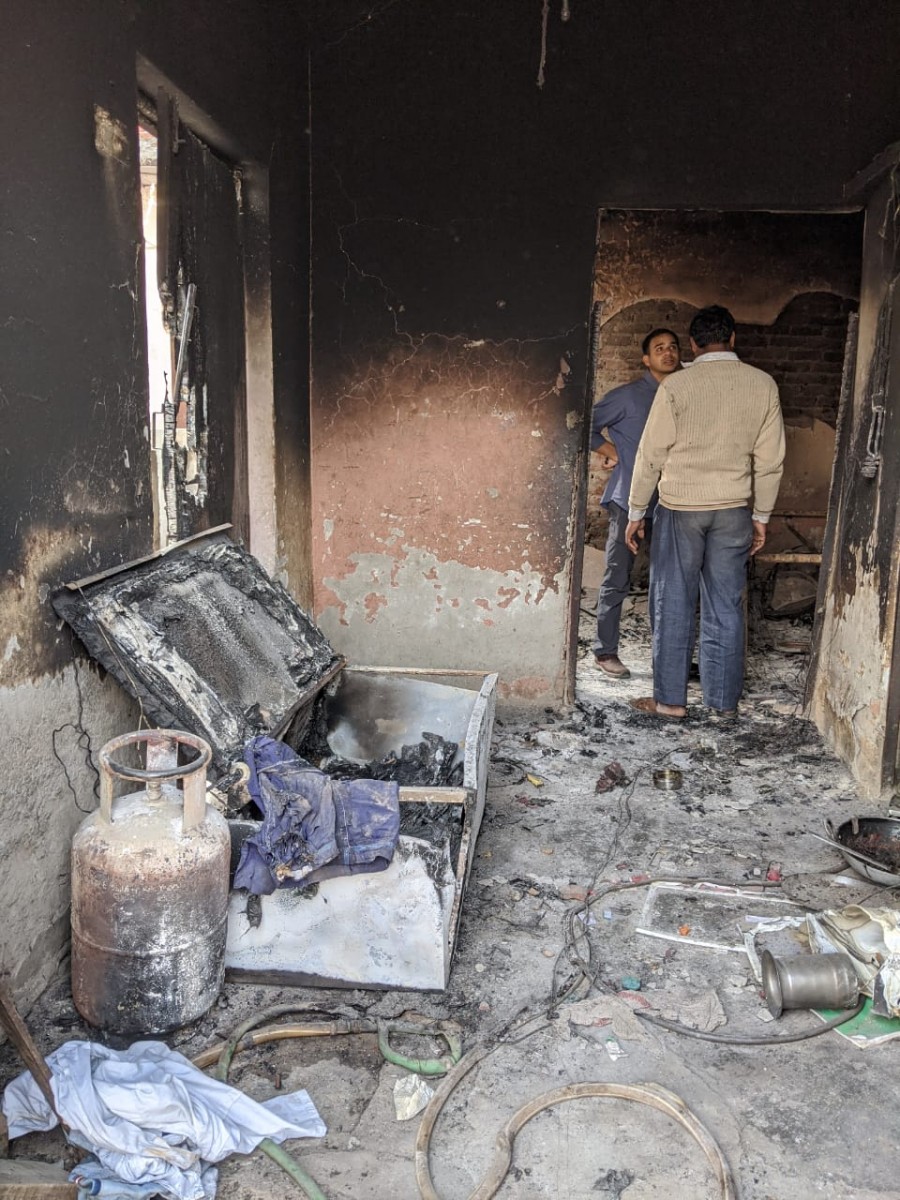 Fazal speaking to a reporter in his house. Photo: Jahnavi Sen

Fazal works as a driver at a local warehouse, earning Rs 7,000 a month. The family earned a few extra rupees around Holi each year, when they would sell wood procured from Ghaziabad to their Hindu neighbours to use for the ceremonial burning of Holika – a demoness in Hindu mythology.

“That, I think, is not going to happen this year,” he says with an ironic smile.

Hundreds of people have abandoned their homes in Shiv Vihar, some afraid the violence may begin again, others because their houses are no longer liveable. About a kilometre away from Fazal’s home, in Chaman Park, about 300 people have taken shelter in a large home owned by a Muslim family.

Here too, the fear of lost documents prevails. Some women have been unable to go back yet, and do not know what condition they will find their belongings in. Others managed to pick up just a few things – one family member’s Aadhaar card, a child’s school certificate.

Saira* is the 23-year-old niece of the man who owns the house. In the middle of telling The Wire’s reporter about how different houses in the neighbourhood have opened their doors to the riot-affected, she stops suddenly.

“Can I see your ID?” she asks. After examining our press cards, she is satisfied.

“I’m sorry about that,” she says, “it’s not about you. I know people are trying to help us – just this afternoon relief workers from an NGO brought us rations. But so many people are coming and going, asking us questions. I worry that we will end up filling up the NPR form without even realising it.”

In the week of violence, thousands of residents of North East Delhi have lost their livelihoods and homes. And the fear of another loss – their official identity – is only growing.