Delhi Riots: 'Is Police Inquiring Into a Conspiracy or Is the Inquiry Itself a Conspiracy?'

A press conference by five activists has attempted to draw attention to Delhi Police's strange methodology in looking into the February riots.

Since the Delhi riots took place in the month of February in the northeast region of Delhi, many Anti-CAA student activists had been arrested in connection with a “conspiracy hatched” that resulted in Delhi riots. 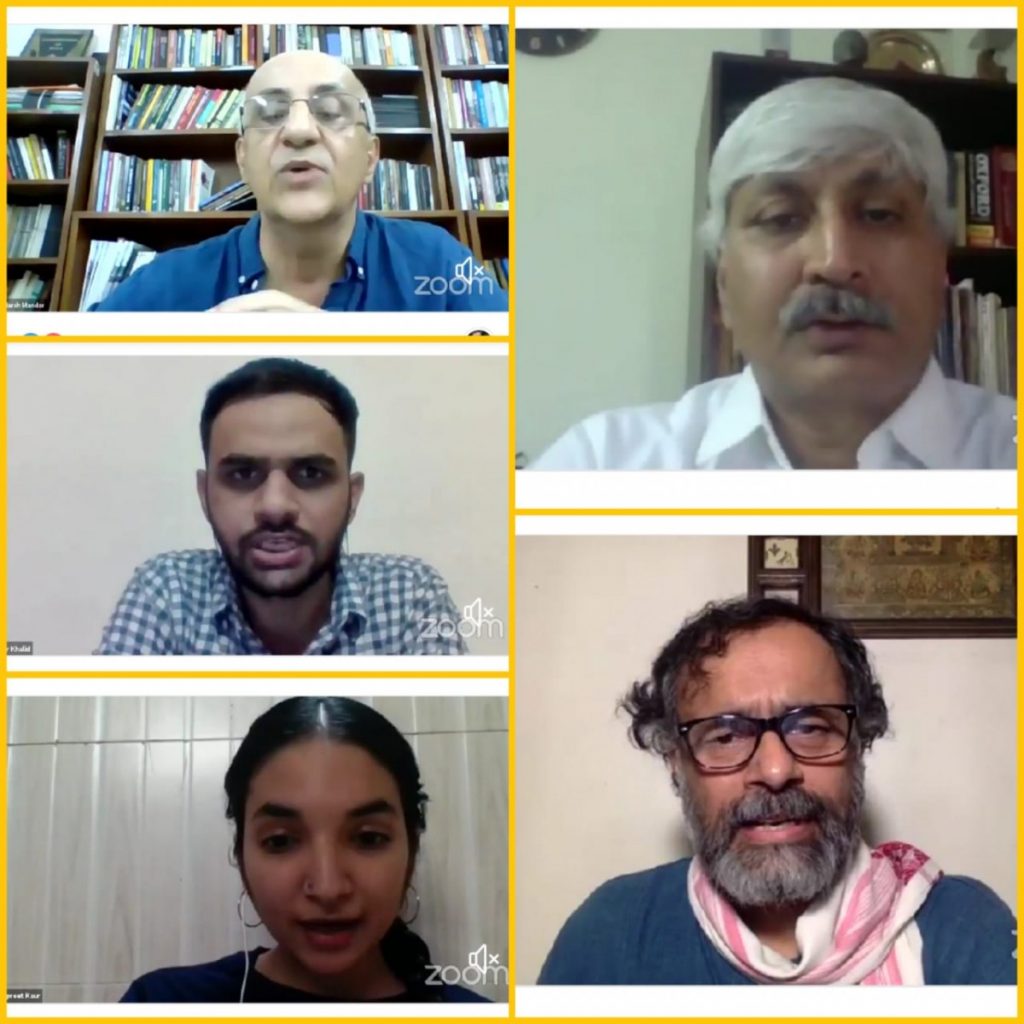 A statement released by the organisers said: “Over the past half year, the supporters and participants of these protests continue to be summoned by the police, harassed and subjected to long interrogations. Several young activists and students also continue to languish in prison under the draconian anti-terror law – UAPA – for almost 6 months now, without any official charges framed against them. Despite inconsistencies and lies that have been rebutted publicly, the Delhi Police has continued unrelentingly with the theory – not coincidentally propounded by the ruling dispensation – that the roots of the conspiracy of the riots lie in the protests against CAA.”

Apoorvanand cited Umar Khalid’s letter as well as the Indian Express report that said that people who were part of the anti-CAA protests were being forced to give statements [against others].”

He also added that the investigation on the Delhi violence that resulted in the deaths of 53 people is going the “wrong” way. “The anti-CAA protests are being investigated as if that was the crime,” he said. He also mentioned the Amnesty report that was released recently, as well as the Polis Project report on the Delhi riots.

Talking about Umar Khalid, he said, “The same government that is targeting him now had previously accused him of things they couldn’t prove,” referring to the JNU sedition row. Apoorvanand also referred to the Bhima Koregaon investigation and said, “The real culprits who beat up Dalits are roaming free.”

Khalid, booked under the UAPA for “instigating the riots” was called by the Delhi Police Crime Branch on Wednesday and questioned for over four hours.

Khalid later wrote a three-page letter, claiming that an acquaintance met him on August 29 and told him that the Special Cell officers gave him a pre-drafted statement to sign against Khalid.

“The investigation of the Delhi police is scripted. Was our [anti-CAA/NRC/NPR] movement a secret? It was a public event. We want to ask the Delhi police, what about this protest incited violence?” He also referred to December 20, 2019, when Section 144 was imposed in certain areas of Delhi during the anti-CAA protests and said, “Kapil Mishra at that time took out a rally, saying things like ‘Desh ke gaddaron ko, goli maaro saalon ko’, why hasn’t the Delhi police taken action against this?”

Referring to the firing incidents on January 29 and February 1 at Jamia Millia Islamia and Shaheen Bagh – the two main sites of the anti-CAA protests, he said, “On February 27, Anurag Thakur had given a speech saying ‘desh ke gaddaron ko, goli maaro saalon ko’ [‘shoot the traitors’]. Is there no link between the two incidents?”

Accusing the Delhi police of “moulding history of the anti-CAA protests,” he questioned why no action was taken against the police personnel who recorded injured men and “forced them to sing the National Anthem,” one of whom succumbed to injuries later.

He added, “Is the Delhi Police inquiring into a conspiracy or is the inquiry is itself a conspiracy?”

Also read: Delhi Riots 2020—There Was a Conspiracy, But Not the One the Police Alleges

He added, “In Delhi, we saw the build-up during the Delhi elections of a climate of hatred, spawned by hate speech by senior [political] leaders targeting the protesters against the CAA, NRC, NPR. There was an unprecedented level of communal venom not seen in any election before.”

Yogendra Yadav asked a set of eleven questions in the press conference. Some repeated the issues on the firing at anti-CAA protest locations and BJP leaders’ hate speeches, put forth by other speakers. The other questions were:

1) On February 25, a statement was released by the Press Information Bureau, after Home Minister Amit Shah chaired a meeting attended by Delhi chief minister Arvind Kejriwal and Delhi Lieutenant Governor Anil Baijal. The statement said. “Shri Shah noted that the professional assessment is that the violence in the capital has been spontaneous.”

However, just a few days later, the Home Minister contradicted his previous statement and stated in the Lok Sabha that the riots were a pre-planned conspiracy? This was even before any investigation had begun into the riots. Is the entire investigation just a façade to arrive at pre-meditated conclusions already announced before the investigation had even commenced?

2) During the violence, multiple videos emerged of persons associated with the ruling dispensation openly inciting and participating in the violence and carnage. In one such video, which was streamed live on Facebook from Maujpur, a woman named Ragini Tiwari is seen openly asking people to kill or die.

Why does her name not find any mention in the chronology of the ‘conspiracy’ put out by the Delhi Police? Reports have also surfaced accusing BJP leaders like Satya Pal Singh, Jagdish Pradhan, Nand Kishore Gujjar and Mohan Singh Bisht. Why has the police not taken cognisance of all this so far?

3) Has the police even taken cognisance of the brutal custodial torture meted out to one of the arrested persons Khalid Saifi?

4) Has the police ordered any probe to several accounts where police allegedly was complicit in the violence, directing mobs pelting stones or looking the other way when mobs were indulging in violence in front of them?

5) Many of those already arrested were initially in different FIRs. It was only after they secured bail in the cases for which they were initially arrested, that the police implicated them in the conspiracy case under UAPA. Is this a ploy to keep protestors in jail for long periods?

6) Confessions made in police custody have no value as evidence in deciding the guilt of anyone. But there has been more than one instance of ‘confessions’ of those arrested making their way to the press. This has been done despite a High Court ruling regarding one of the accused against such leakages of the details of the investigation to the press. Why is the police trying to prejudice public opinion against those arrested, even before it has officially framed any charges?

7) In its latest line of questioning, the Delhi Police has been grilling people on their about conversations in some WhatsApp groups with hundreds of members. Isn’t it ridiculous to believe that riots of this scale were conspired for several weeks in WhatsApp groups with hundreds of people and the police never got to know about them? Or are the police pursuing this line of argument in order to safeguard real culprits?

Kawalpreet Kaur, AISA’s Delhi president, said, “On 7th and 8th of March 2020, news reports by ANI, Rajasthan Patrika and other media organisations quoted RSS accusing AISA along with other organisations of being the key conspirators in the North East Delhi riots.”

On March 11, a group led by Monika Arora submitted a “fact finding” report on the Delhi riots to Union home minister Amit Shah.

Talking about that report, Kaur said, “That report also targeted AISA and other student groups. On 12th March AISA sent a letter to Rajasthan Patrika which was later made public, condemning and demolishing these lies. The Delhi Police claimed on April 25th 2020 that its targeting of AISA and other student groups is based on painstaking “investigations” and “evidence”. But the fact is that the Delhi Police is simply acting out a script that had been prepared by the RSS-BJP brigade and then amplified by its supporters like Monika Arora, more than a month before the Delhi Police’s supposed investigations.”

She requested students to stay united and “refuse to be scared or silenced” and also said that the bail order of Devangana Kalita, a Pinjra Tod member who was arrested by Delhi police “clearly fails to provide any evidence against her.”