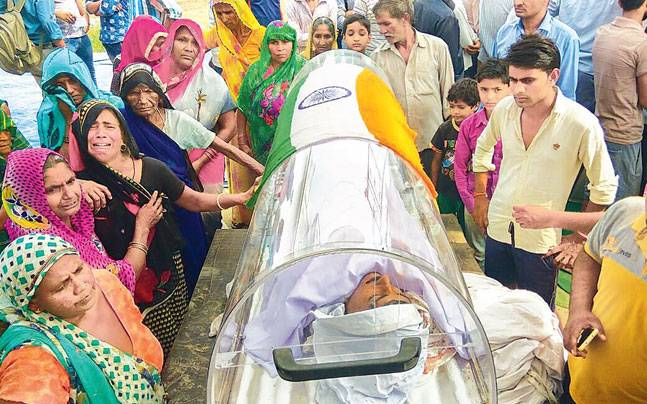 The body of Dadri lynching accused Ravi Sisodia was draped with the national flag. Credit: Twitter

The funeral of Dadri lynching accused Ravin Sisodia already made headlines after villagers decided to drape the tricolour on his body and project him as a martyr, joined by the leaders of several right-wing organisations.

But that wasn’t all that happened.

Sisodia’s family members and other residents had refused to cremate his body, alleging that he did not die of natural causes, as stated by the authorities. They demanded Rs 1 crore as compensation, a CBI probe into the death, a job for a family member, action against jail officials and an inquiry against the brother of Mohammed Akhlaq (the Dadri lynching victim) on charges of cow slaughter.

Union culture minister Mahesh Sharma visited Bisada village in Dadri, Uttar Pradesh to pay his respects to Sisodia’s body and family on Friday. Sharma, who is Lok Sabha MP for the local constituency, tweeted images of himself at the gathering.

“The attitude of the (state) government has been disappointing. It cannot escape the responsibility of this death. If he was unwell, why was he not given medical treatment, why was he not given medical help on time? If there was a scuffle and he was beaten up, there should be an inquiry. They have accepted the demand for a CBI inquiry,” Indian Express quoted Sharma as saying at the gathering.

The minister’s visit and support to the gathering where communal speeches were openly made is a throwback to Sharma’s earlier expressions of support for the 16 men and two juveniles accused of murdering Akhlaq. A few days after the incident last year, after visiting the victim’s family, Sharma said the nature of Akhlaq’s son Danish’s injuries showed that the mob’s intention was “not to lynch” him and his father. He also added that the mob had not touched the 15-year-old girl in the house, reports said.

“You must have seen that whenever there is any buzz about cow slaughter, media, people all rush (to the spot). All those who love the cow rush (to the spot). It (the murder) took place as a reaction to that incident (cow slaughter). You must also consider that there was also a 17-year-old daughter in that home. Kisi ne usey ungli nahin lagaayi (nobody touched her),” he was quoted as saying.

In December last year, when a forensic study ruled that the meat in Akhlaq’s fridge was not beef, Sharma refused to believe it and maintained that it was.

Senior officials of the district administration, including BJP MLA Sangeet Som, and the police held a meeting with local residents on Friday. They announced Rs 25 lakh as compensation for the family and a CBI probe into the matter, the Times of India reported. The administration also promised to help get Sisodia’s widow a job. After these promises, Sisodia’s body was finally cremated on Friday night, three days after he died.