When Even a Pandemic Is Communalised

The right-wing ecosystem appears bent on blaming the Tablighi Jamaat for the COVID-19 outbreak in India. 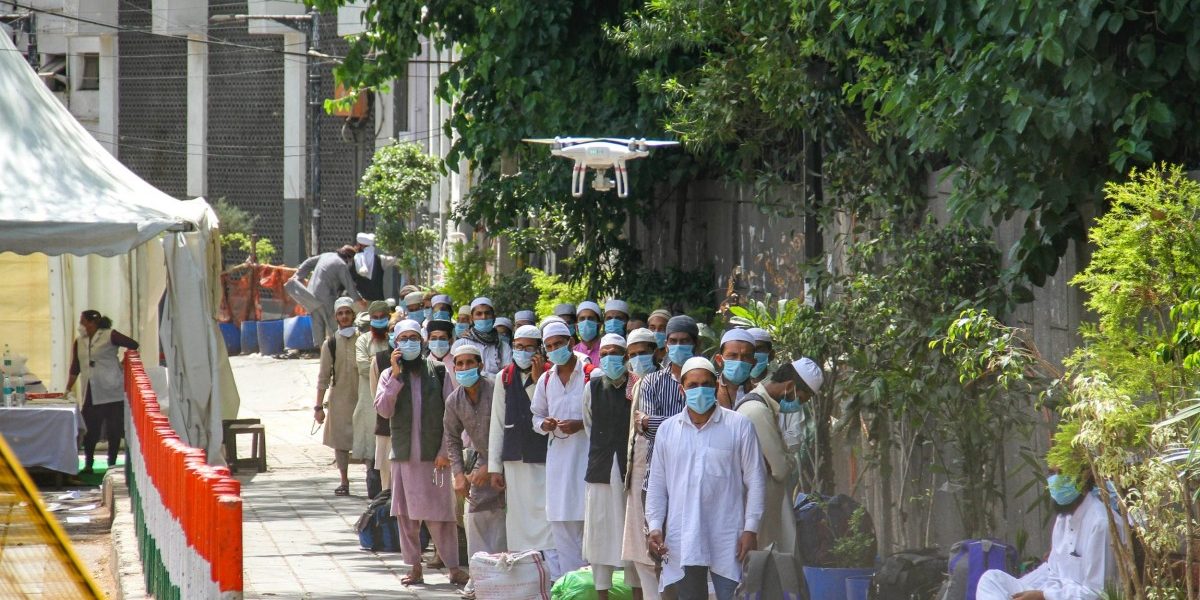 The home ministry had blacklisted 2,550 Tablighi Jamaat members from nearly 40 countries who were staying in India during the nationwide coronavirus lockdown. Photo: PTI/File

Although everything in nature is telling us to sober up as the world grapples with the COVID-19 pandemic, Indian right-wing warriors have chosen to communalise the human tragedy along Hindu-Muslim lines.

In February, they sought to deflect attention from alleged police complicity and government inaction in the visibly anti-Muslim Delhi riots by either talking only about the brutal murders of policeman Ratan Lal and Intelligence Bureau staffer Ankit Sharma, or by drawing attention to Aam Aadmi Party’s councillor Tahir Hussain’s alleged culpability in the violence incessantly.

Now, even as Indians are locked in their homes to stave off the COVID-19 outbreak and scores of poor migrant workers are stranded without work or shelter, the right-wing ecosystem has found yet another opening to demonise the usual scapegoats – Muslims. This time, it is by centring the attack on one Islamic evangelical organisation – the Tablighi Jamaat (TJ) – whose headquarters in Nizamuddin in Delhi saw a large number of members arrive and stay in the days before Prime Minister Narendra Modi announced a 21-day lockdown on March 24.

Was Tablighi Jamaat alone in taking the COVID-19 threat casually?

A simple fact sheet can show how the TJ was not the only culprit in taking the pandemic lightly. In fact, most Indians, including those leading Central ministries, did not think it was a public health emergency then.

TJ had planned its March programme in advance, for which a number of believers, including foreigners, had booked tickets and got visas. Many of them ended up becoming “super spreaders” of the virus, but was it only their fault?

It was on March 9 that the Union government first ordered a largely inadequate medical screening at Indian airports. Media reports have it that the World Health Organisation (WHO) declared COVID-19 a pandemic on March 11, yet the Union home ministry told Indians on March 13 that it wasn’t a “health emergency yet”.

The Aam Aadmi Party-led Delhi government began to take precautionary measures the same day when it banned gatherings of more than 200 people, while exempting marriage functions. Religious sites across different faiths, offices and public transport services in Delhi were all up and running still, as common Indians had not fully grasped the dangers of COVID-19.

It was only on March 16, when the Delhi government banned any gathering of more than 50 people, that people in Delhi began to take the matter seriously. Even then, the Union government had not woken up. On the evening of March 19, the prime minister urged people to observe a day-long “Janata Curfew” on March 22. Even at that time, many assemblies, including in Delhi, and parliament continued to be in session, giving a semblance of normalcy.

As late as March 20, the Uttar Pradesh government had plans to go ahead with a week-long Chaitra Ram Navami Mela from March 25 to April 2. It was only when the Union government banned all flights on March 24 and imposed a 21-day lockdown a day after that the threat finally dawned upon people.

The TJ has erred and acted irresponsibly for taking the COVID-19 threat lightly. For not emptying out their headquarters – which functions as a hostel – well until March 19, the day when Modi gave a call for “Janata Curfew.” The Delhi police has now filed an FIR against six officials of the organisation under the Epidemic Diseases Act. While a case against the TJ can definitely be made, especially for violating the March 16 order, to blame the spread of COVID-19 singularly on it is not only misleading but malevolent.

Now, if we take a look at the government action, there are many unanswered questions. Media reports have clearly stated that the Telangana government informed the Union health ministry about the TJ gathering as early as March 18 when it probed the travel histories of some COVID-19 positive patients in the state. Three days later, on March 21, even the Tamil Nadu government alerted the Central ministry about the TJ headquarters being a possible hotspot.

Despite knowing that Nizamuddin could be one of the possible hotspots for the virus, both the Union government and the Delhi government appear to have acted at a snail’s place.

It was only on March 31 that the Union home ministry informed the media that all state governments were issued an advisory on the TJ gathering and its linkages with Telangana and Tamil Nadu patients on March 21. However, it is unclear what the Centre, and the state governments, did to evacuate and quarantine more than 1,000 people at the TJ headquarters. The TJ claims that although it sought to empty out its headquarters beginning March 19, many were left stranded because of the sudden disruption in transport services owing to a lockdown imposed by the Delhi government on March 23.

More importantly, why didn’t the Delhi Police act to enforce the government’s ‘no more than 50 person’ rule when it was clear the TJ was flouting it?  It is apparent that the Delhi police addressed the TJ matter not before March 24 when its officers summoned the Markaz officials. The police has released a video – some reports say it is dated March 23, the TJ authorities have told the media it is of March 24 – which shows an officer giving them directions to empty the Markaz premises.

The police official then directs them to the sub-divisional magistrate (SDM) for help. However, it still remains unclear what the Delhi police and Delhi government officials did subsequently to facilitate the evacuation process because the TJ members at the Markaz were not moved.

That process began only on March 28 ad 29. On March 31, Delhi’s health minister Satyendra Jain informed The Wire that 1,033 people have been taken out of the TJ building at Nizamuddin so far and 24 of them have been found to be coronavirus positive.

The home ministry statement also does not clarify whether it directed the Delhi government and the Delhi police to specifically look into the issue. Given the ministry’s knowledge about the TJ gathering in March, this may have been an important intervention as the TJ’s headquarters was full of potential vectors of the coronavirus. It also did not issue any general advisory to the people of Nizamuddin and adjoining areas.

Will these questions ever be answered?

These are valid questions, but right-wing warriors are likely to remain deaf to them because it does not suit their political interests.

People in democracies tend to take a crisis seriously only when its leaders prompt them to think about it seriously, and take measures to mitigate it. Isolating and targetting the Tablighi Jamaat, while multiple other shrines from different faiths continued to function until the last week of March owing to government inaction, reeks of a majoritarian political campaign.

Let us be clear. The communal campaign during an unprecedented lockdown is strictly intended to serve political ends. The tacit support it has received from the Union government only goes to prove the point.

The campaign has gathered steam at a time when large sections of Indian society have been questioning the Union government’s preparedness to tackle the COVID-19 pandemic. The Centre has shown little transparency in its functioning at a time when frontline health workers are battling the crisis without protective gear and with an abysmally low number of ventilators and testing kits.

Also read: Making Sense of COVID-19 Data and Why It Is Too Early to Jump to Conclusions

The migrant worker crisis that we have been witnessing over the past few days could unfold into one of the biggest Indian tragedies, and the government has only looked to push it under the rug. Most workers with whom The Wire spoke said that they had been living in frightful conditions at the industrial clusters where they were employed. Many lived in small buildings where not less than 400 labourers stayed, and risked contracting the virus.

Even as Muslims are being vilified on television channels and elsewhere, there are still hundreds of other locations where many people continue to be stuck, hoping for rescue.

In an alternate world, there could have been a different debate in which citizens discussed multiple ways through which India’s public health care could be improved, or on how India could be better prepared to tackle such challenges in the future. However, that seems inconceivable at present.

Had the right wing looked around even a little, it would have been obvious to it that Muslims have respected, and flouted, lockdown directives as much as any other community.

At the end, we must all ask ourselves this: how would we be able to contain the virus by blaming one community for the COVID-19 outbreak in India? Only after we get a clear answer, does it make sense to engage in the debate that the Indian right wing has started.