COVID-19: Responses to a Public Health Crisis Must Not Have Communal Overtones

Communalising a public health crisis has an extremely deleterious impact on the health and lives of the people who are affected. 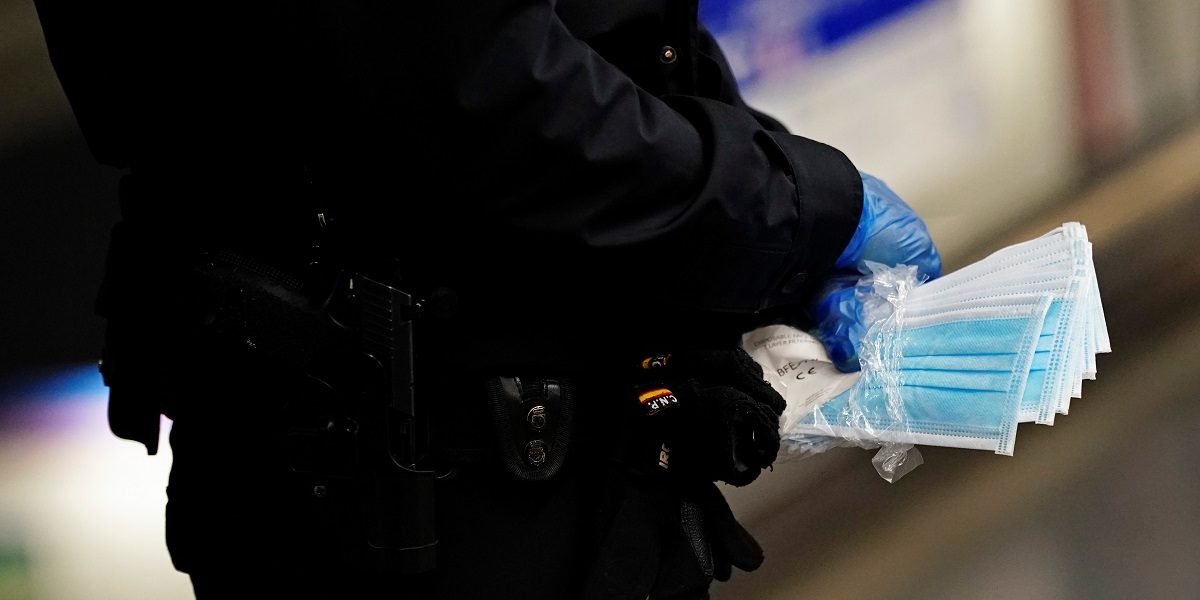 A police officer holds free protective face masks to be given to people at a metro station in Madrid, Spain, April 13, 2020. Photo: REUTERS/Juan Medina

In the past week, India witnessed a spike in the number of confirmed cases of COVID-19. In lockdown till April 14 (which is likely to be extended), the country is trudging through the last few days of the current phase, one that has brought with it unprecedented social and economic deprivations.  Governments, media, public health experts, have been deliberating on what the next steps should be, given the scale of the health and human crises that the unprepared lockdown, announced overnight, has unleashed.

This public health crisis has unravelled the injustices and inequities that underpin people’s lives, including more recently the extremely communal undertones. These overt and sometimes insidious expressions and actions by the state, media and other institutions have been unabashed in their attempt to communalise a public health crisis. Orations by government representatives as well as political parties have repeatedly referred to a religious gathering in Delhi. Bulletin updates on COVID-19 cases, for example by the Delhi government, have repeatedly referred to and demarcated them on the basis of the religious congregation, apportioning blame for subsequent infections to those who participated.

The lack of integrity of the state in reigning in this public health concern has instead encouraged the media, academia and others to act with impunity. This has taken the shape of a mathematical model proposed by the Indian Institute of Management (IIM) Rohtak that claims that the “congregation held at its headquarters in Delhi from 13-15 March will increase coronavirus cases “exponentially” or the daily crossword carried by a Hindi newspaper on April 7, which reinforced prejudice and stigma.

In India, with its long history and deep roots of Islamophobia, evident even as recent as February 2020 in Delhi, communalising a public health crisis has an extremely deleterious impact on the health and lives of the people who are affected. This is already evident from emerging narratives of the Muslim families in the state of Punjab driven to hide in a riverbed having been forced out of their villages, or from the false allegations of misbehaviour with doctors in the state of Chhattisgarh against a Muslim youth allegedly from the Delhi congregation, which was denied by the doctors. Another report from the state of Rajasthan indicated that a Muslim woman was denied access to delivery, which resulted in the loss of her child. A Muslim youth died by suicide in Himachal Pradesh’s Una district on April 5 following alleged taunts for coming in contact with persons who had been part of the congregation in Delhi. The attempts to extrapolate the ‘stigma’ of COVID-19 to an entire community, i.e. the Muslim community in India, is nothing short of targeted vilification in a public health crisis. 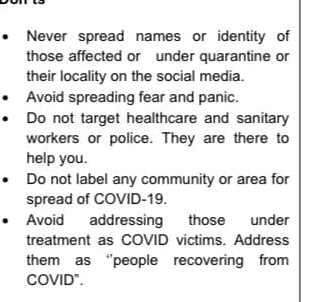 It is also in contravention of the World Health Organisation’s advisory issued on April 6 that “countries should not profile novel coronavirus disease (COVID-19) cases in terms of religion or any other criteria”, asking “governments not to politicize the issue and stop profiling people on religious basis.” The advisory also requested people to “never spread names or identity of those affected or under quarantine or their locality on the social media”.

Echoing the concerns of the WHO, some of the state and Central departments and bodies have flagged the need to avoid religious targeting and discrimination. The advisory released on April 8 by the Union health ministry requested citizens to ‘never spread names or identity of those affected or under quarantine or their locality on the social media’. It has don’ts on page two saying don’t label any community of area for the spread of COVID-19.

While some states have emphasised the importance of not stigmatising communities on the basis of religion, other states, as well as non-state actors, have used this pandemic to aggravate prejudice based on religious identity, and condone violence and vigilantism against the larger Muslim community. This has resulted in the escalation of prevailing ‘stigma’ associated COVID-19 and those who are positive or in quarantine, now being tainted with communalised rhetoric.

Thus, barriers to accessing information, healthcare and other essential needs have acutely deepened. The implications of such irresponsible actions by the State are particularly severe in the context of the current pandemic but also in its aftermath.

Also Read: While the World Fights COVID-19, Indians are Busy Communalising It

The onus of the current public health emergency and responses must fundamentally lie on governments – Centre and states. With 7,987 active cases of COVID-19 as of Monday morning, the country’s lack of preparedness is visible from the continued lack of prevention, limited screening and other healthcare facilities, shortfalls in personal protective equipment (PPE) for healthcare workers, denial of access to essential services including health care for the elderly, disabled and the chronically ill.

The responses to a public health crisis should not under any circumstances have communal overtones. Any such attempts divert critical public attention away from much needed civic responsibility, adherence and support imperative to ensure the health and well-being of all people, who may be affected regardless of their religious and other affiliations. Any attempts to shift the accountability of infection due to a pandemic of this magnitude to a congregation of persons is deplorable and counter-productive. Instead, governments must ensure that all necessary measures are undertaken to contain and manage the pandemic without compromising standards of human rights and public health. The rhetoric of communalism has no place in a secular democratic state nor in a public health response to a global pandemic.

Deepa Venkatachalam and Sarojini Nadimpally are public health practitioners and are part of Jan Swasthya Abhiyan.