After six Muslim women students in Karnataka's Udupi were denied entry into their classroom for wearing hijabs, the issue has come to the national forefront with schools and colleges in various parts of the country now following suit. 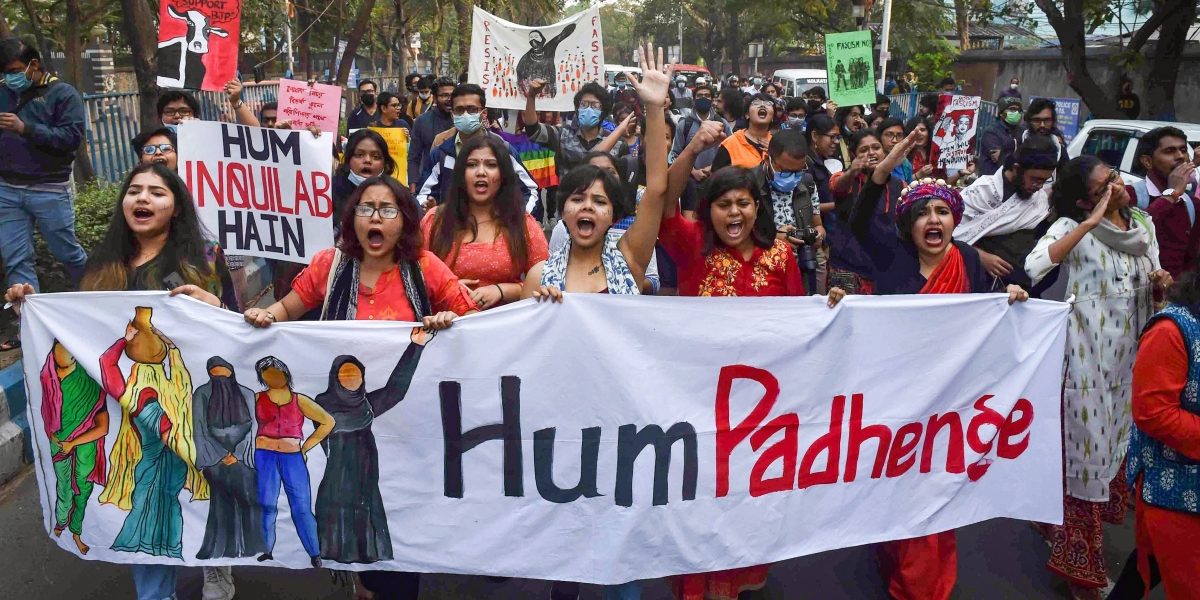 Students of Jadavpur University hold placards while raising slogans during a protest in support of the right to wear a 'hijab', in Kolkata, February 11, 2022. Photo: PTI

New Delhi: After six Muslim students were denied entry into their classroom for wearing hijabs at the Government Women’s PU College in Karnataka’s Udupi in December last year, many similar incidents have cropped up in educational institutes, first in the state and now across the country.

On Monday, February 21, a government school in Delhi’s Mustafabad region – a region which had been impacted by the February 2020 Northeast Delhi riots – allegedly denied entry to students into classrooms if they were wearing hijabs.

Fatima*, a Class 6 student at the Senior Secondary Girl’s school in Tukhmirpur, was refused entry into her classroom as offline classes resumed this week. In a video that has been making the rounds on social media, the student can be seen explaining what transpired in the classroom, describing how she was pulled out of class and asked to remove the hijab.

Speaking to The Wire, Fatima’s father Mohammed Ayyub said, “On February 21, my ten-year-old daughter had gone to attend her class. On entering her classroom, her friends, who are also Muslim, told her to remove the hijab as the teacher had asked them to do so.” Fatima was allegedly also taunted by the teacher in front of her classmates.

Ayyub said that when he reached out to the school later seeking answers, he was told that asking students to remove their hijabs was, in fact, in line with a supposed policy of the Delhi government.

“The principal first told me that the Delhi government wants all students to dress uniformly and that she was just following orders. When I asked her to say that on camera or show me a legal notice on the same, four teachers who were in the room snatched my phone and heckled me, with the principal watching. They were all women, so I could not do anything,” Ayyub said.

He added that the principal later back-tracked on her statement and said that while there is no formal order, she cannot allow some students to “look different” from other girls in the school.

When contacted by The Wire, the principal, Sushila Devi, denied that any such instance had taken place. Importantly, however, she admitted to the fact that young Muslim students had been taking off their hijabs while entering classrooms prior to the issue being brought to the national forefront.

However, a former student from Mustafabad who also studied in a school run by the Delhi government in the locality, told The Wire, on the condition of anonymity, that she had never been asked to remove her hijab. “There were only two Muslim students in our batch and we were not asked to remove our hijab ever,” she said.

Ayyub further said, “They are creating a Karnataka-like environment here. I even told the teacher that this is not Karnataka, but she did not listen.” For now, Ayyub said that the principal has “forced him to accept that his daughter will not wear a hijab inside the class” and that she will not be allowed to enter the class next time.

Mustafabad MLA Haji Yunus, when asked about the incident, said it was regrettable that such instances are surfacing.

However, he went on to tell The Wire, “Teacher ki thodi galti thi par humne school main alag ek room allot kar diya hai ki woh change karke classroom main chale jayein. Padhne ke liye toh utarna hi padega woh hijab. Dress main ek hi tarah baithenge toh acha lagega (While the teacher is at fault, we have allotted a separate room where students can change out of their hijab and enter the classroom. The student has to take off their hijab if she wants to study. It is better if all students look the same while studying).”

When asked about the Delhi government’s policy on uniforms, Yunus contradicted himself, saying that there is no restriction. Moreover, the MLA noted that a complaint into the recent incident has been taken into account and that an inquiry is on. “If the teacher is found at fault during the investigation, appropriate action will be taken,” he added.

Two other similar instances of students being denied entry into classrooms for wearing hijabs have allegedly taken place in Northeast Delhi, in addition to the many instances that have sprung up across the country.

Kashif Afroz, a resident of Mustafabad, told The Wire that the region has been witnessing an increased hostility towards women wearing hijabs, not just in schools but in the outside world as well. He said that he has seen women wearing hijabs being catcalled and made uncomfortable on the streets and outside their homes.

When asked about the incident with Fatima, Afroz said, “It is sad that such an incident took place. I spoke to the girl and she was very distressed about the whole incident. I can confirm that this is not an isolated incident and other students have been denied entry over the same.”

“Fear prevails in the region; many want to conceal their identities,” he added.

After the first incident in Karnataka last year, the controversy surrounding students wearing hijabs has escalated into a national issue. The matter is currently being heard by a full bench of the Karnataka high court. On February 8, Karnataka chief minister Basavaraj Bommai had even ordered schools in the state be closed as students had taken to the streets to protest against the issue. However, even after schools reopened, more instances of these supposed ‘hijab bans’ sprung up.

In Uttar Pradesh’s Aligarh, the Dharma Samaj College banned the entry of students wearing hijabs or any clothing other than the “prescribed uniform,” according to a report by the Times of India.

In another instance from Varanasi, protestors outside a school in Shivpur were asking the authorities to “ban hijabs”. The school’s principal, Nirmala Rathore, had said that the dress code is being strictly followed and that no student is allowed to wear a hijab. The youth leading the protests has since been arrested.

At the Loyola College in Andhra Pradesh’s Vijaywada, too, Muslim women students were stopped at the gate of the college for wearing burqas and hijabs, according to a Hindustan Times report. They were, however, allowed in, following negotiations with the administration.

The issue surrounding the entry of hijab-clad students comes at a time where attacks on Muslims in India are seemingly on the rise.

*Name changed to protect the identity of a minor.