'It’s important to ignite the fire sometimes. I am telling you; anyone who comes into your house, street, neighbourhood, village, don’t forgive them,' Swami Parmatmanand said. A screengrab of the Facebook video showing Swami Parmatmanand making his speech at the Surguja rally.

New Delhi: On October 1, 2021, a massive protest rally was organised in Chhattisgarh’s Surguja district. The ‘protest’ was against the alleged spike in forced conversion of Hindus into Christianity.

At the rally, attended by many BJP bigwigs, Swami Parmatmanand called for targeted killings of minorities involved in these alleged forced conversions.

“I am a saint. I don’t care, I will tell you clearly. Ramvichar ji has said the same thing but he is a little unclear. Keep a lathi at home…In our villages, people keep hand-axes. Why do they keep axes? Why do you keep a farsa? Behead them – those who come for conversion. Now you’ll say that I am spreading hate although I’m a saint. But it’s important to ignite the fire sometimes. I am telling you; anyone who comes into your house, street, neighbourhood, village, don’t forgive them,” he said.

However, the priest did not stop here. He even gave a formula to deal with such conversions.

“I want to tell those Christians who went away (converted), why did you leave the ocean for the well? I want you to talk to them politely first. Roko (stop), phir toko (protest), phir thoko (shoot),” he added.

What’s more worrying than the priest’s violent call to arms is the fact that while he exhorted hundreds of listeners to behead Christians, influential leaders of the BJP in Chhattisgarh like Ramvichar Netam, Nand Kumar Sai and BJP spokesperson Anurag Singh Deo were present on the stage. 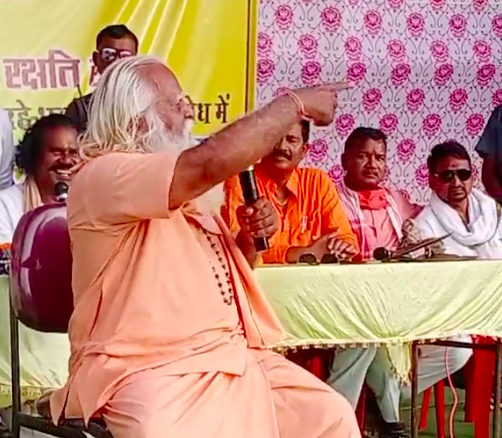 A screengrab of the Facebook video showing Swami Parmatmanand making his speech at the Surguja rally. Other leaders can be seen behind him.

In the video, Nand Kumar Sai, former MP and ex-chairman of the National Scheduled Tribes Commission can be seen smiling and clapping, perhaps in agreement. Later, the leaders posed for the camera with bows, arrows and spears.

Parmatmanand, the former head of the Sanskrit board, is a prominent Hindutva leader in Chhattisgarh who is infamous for his violent anti-minority utterances. Following the lynching of Pehlu Khan, Parmatmanand criticised Prime Minister Narendra Modi’s statement that anti-social elements were masquerading as ‘gau rakshaks.’ He asked the government to felicitate those who kill cow-smugglers.

“Cow-killers should be shot with glass bullets,” he had said in 2017.

This event called Bandh Karo Dharmantaran (stop religious conversions) was organised by Sarwa Sanatan Hindu Raksha Manch, a loose coalition of like-minded Hindutva supporters. In the past few months, the BJP has shifted its focus back on the issue of “forced-conversions” and there has been a marked escalation in Hindutva rhetoric and on-ground mobilisation against conversions.

The issue gained traction after the Sukma Superintendent of Police issued a letter which asked all police stations to keep an eye on Christian missionaries and recently converted tribal people, in an effort to stop “illegal” religious conversions. Former CM and BJP leader Raman Singh had accused the Congress government of abetting unlawful conversions, especially in Bastar and Surguja.

CM Baghel hit back by accusing the BJP of having facilitated more forced conversions during its 15-year tenure.

“Media reports on BJP Chintan Shivir highlight that the 15-year misrule of Raman Singh is being discussed. Religious conversion is also part of this discussion. Records show that the maximum number of churches were constructed under BJP rule in Chhattisgarh,” he had said.

“The BJP only knows how to spread hate, which is easy. Ensuring harmony is a difficult job,” Sushil Shukla, head of the communication of Congress’s Chhattisgarh wing told The Wire. “More churches were built during the BJP rule,” he also said.

The Wire asked Shukla if it was unlawful to build more churches. Shukla replied that it is not illegal but said that BJP did not “check conversion” during its 15-year rule. On the Surguja rally, he said that the police has taken cognisance of the matter.

Shukla, however, asked this correspondent if a complaint has been filed. When The Wire said that police were duty-bound and empowered by the law to act if somebody provoked violence, he insisted that action will be taken after investigation. “Baghel’s Chhattisgarh runs according to the rule of law. No one will be allowed to target any community. We have taken strong action against such acts in the past, he said.

While Chhattisgarh is becoming a hotbed for anti-Christian mobilisation, a new wave of paranoia against alleged forced conversion can be felt across several states in India.

In Uttar Pradesh, the STF has claimed to bust an alleged conversion racket being run by prominent Muslim clerics. Critics have raised serious questions on the arrests in the case. In his annual Dusshera address, which also sets the Sangh Parivar’s agenda for the year, the Rashtriya Swayamsevak Sangh chief, Mohan Bhagwat, expressed deep concern about the “unnatural growth” of Muslim and Christian populations in India.

A day later, the Karnataka chief minister rolled out a plan for church “surveys” to check forced conversion.

Earlier this month, a church was vandalised and Christians were assaulted by a mob of 250 Hindutva activists in Roorkee alleging forced conversion. Members of the Christian family have been booked under several serious sections of the IPC – 153 (promoting religious disharmony), 395 (dacoity) 120b (criminal conspiracy) and other sections after a counter FIR was registered against them.

Citing a series of recent attacks against Christians, human rights advocacy group CJP wrote to the chairman of the National Commission for Minorities to take cognisance of the growing attacks and impunity of the perpetrators. “Such attacks as they have taken place in smaller towns and villages across northern states within just 2 days and all have been alleged to have been committed by some right-wing goons is an indication that these attacks were orchestrated and planned so that members of the Christian minority community are attacked and harassed. Clearly, these attacks had a motive of subverting the members of the community and creating an environment of fear psychosis on communal lines,” the CJP said.

The attacks on Christian minorities have intensified in the recent days, especially in Uttar Pradesh, Madhya Pradesh, Karnataka and Chhattisgarh, feels William Michael, leader of the United Christian Forum.

“We can’t see these attacks in isolation of the nationwide bogey of forced mass conversions being propelled by the Sangh Parivar and the BJP. The home minister and his law enforcement machinery must be forced to check violent acts of terror against Christian minorities. Instead, the victims are being threatened and incarcerated. This shows how our institutions have totally collapsed, both legally and morally,” said Michael.

The Wire has attempted to contact the Surguja SP for his comments but has not received a response yet. This article will be updated as soon as he responds.