'We gathered the people of the neighbourhood and decided that nobody was going to fight.' 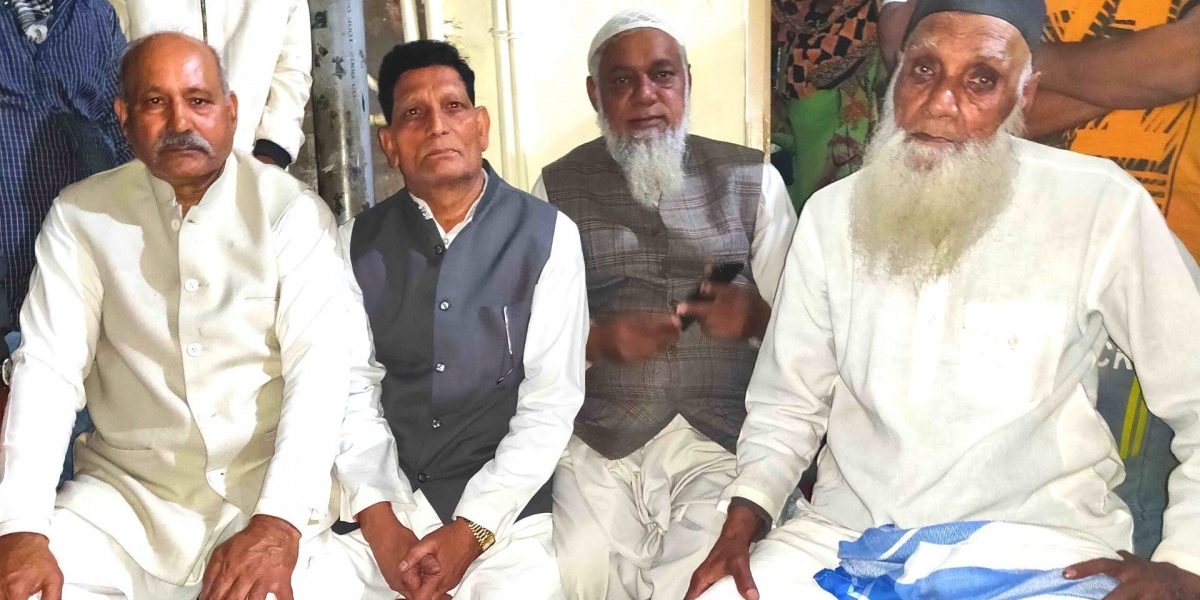 The road was broken and covered in the debris of rocks and broken bricks, the skeletons of burnt cars. The darkness was broken by a motorbike shop on fire around the corner. A few policemen stood at the head of the street, and politely told us that we should leave, because the situation had deteriorated.

The road was deserted as we walked in, until we saw four men standing on a corner. One wore a skull cap and had a white beard. We went up to them and asked for directions to a place where we had got a distress call from a Muslim woman, and the man said:

“Come with me. I promise you that no harm will come to you with me.”

As he took us down the lane, more people joined us, and it grew into a group. Men were sitting outside their homes, and he greeted them in passing. A drunk was unconscious under a handcart on the side of a lane.

“We’ve made sure to keep the peace, here,” said the man, whose name was Afzal. “This block is calm.”

He took us to his home, and brought out wooden stools for us to sit, and called for his Hindu neighbours. We sat in the street, surrounded by men, both Hindus and Muslims, as the fires blazed less than two streets away in the heart of the violence on the main street.

“When we found out this was happening, we gathered the people of the neighbourhood and decided that nobody was going to fight, and that we should band together to ensure that” said Afzal, who has lived on this street for 40 years.

“We went out to our Hindu neighbours and told them you are safe here, and if they needed to go anywhere, we would go with them.”

“There has not been any arson here,” he said.

“Wherever there has been arson, be it from the Muslim community or the Hindu community, we will wait for an investigation to prove who did it, but in our block, we are making sure nothing happens. We have lived here through ‘92, through ‘84, and nothing reached us then, and will not reach us now. Nobody wants a riot. Nobody wants fighting, a sensible man does not want fighting.”

“We were here in ‘92 as well, and we’ve all lived together and we never fight, we visit each other and go to each others weddings. We have no problems with any of our neighbours. For the past two days, it is not just Muslims whose lives have been affected, both sides have been troubled by this violence.

“We don’t think this is right. We want the Delhi Police to find out who did this, and we definitely want Kapil Mishra to be arrested, and whatever the government can do to punish him, should be done.”

Afzal added, “It has been three days since this violence has been going on, and the people responsible have not reacted in time.” The older neighbours with the youth of the locality in Chand Bagh. Photo: Naomi Barton

Another Hindu neighbour, Rajgopal Mishra, of Galli number 2, Chand Bagh, said, in his 40 years there, “We have had such a brotherhood with our Muslim neighbours, it is like they are our own brothers.” He holds up his two little fingers, entwined together, to show how close they are.

“What I have seen today, I have never seen in my life. In the rest of Chand Bagh, the situation has deteriorated, but in our colony, the situation is great. We suffer small inconveniences, all of us do, but all of our [Muslim] brothers here have stood by our side.”

He pauses, and continues fiercely. “I have hope that even going forward, they will walk with me shoulder to shoulder. In bringing this community back, if it means that we need to give our blood, all these children, and me, will give our blood.”

Every man there claps.

“When Hindus and Muslims were fighting, hamare walid (my father) Mohammad Bilal said, tell your friends, the ones who are going to Pakistan, to say salaam to God for me. We will not go to Pakistan on any grounds, this is our country, and this is our birthland. In our bodies the earth of this land is, and in this land our blood has wept.

The men around him clap again.

He says, “In that age, there was a slogan that people used to say, whose echoes we are hearing even today, and my ears are ready to hear that slogan at every election. It was ‘Hindu Muslim bhai bhai/Aur ye teesri qaum, kahana se ai’?”

‘Hindus and Muslims are brothers, where did this third community come from?’

He continued, “I will wait for the day where an election comes and I will get to hear, ‘Hindu Muslim bhai bhai/Aur duniya ke saare quam hume juda na kar pai’.”

‘Hindus and Muslims are brothers, and the whole world could not separate us.’

The exquisite hospitality of the people of Chand Bagh involved pressing soft drinks into our hands, ignoring all protests. A young girl stood in a doorway, peeping out, and smiled shyly at us as we walked out.

Less than 5 km away, we would go see some of the worst horrors of the riot at Mustafabad, but in these lanes in Chand Bagh, there was brief respite.