Narendra Modi and Amit Shah’s plans will harden Hindu identity and potentially turn many Indians, including a disproportionate number of Muslims, into stateless subjects. 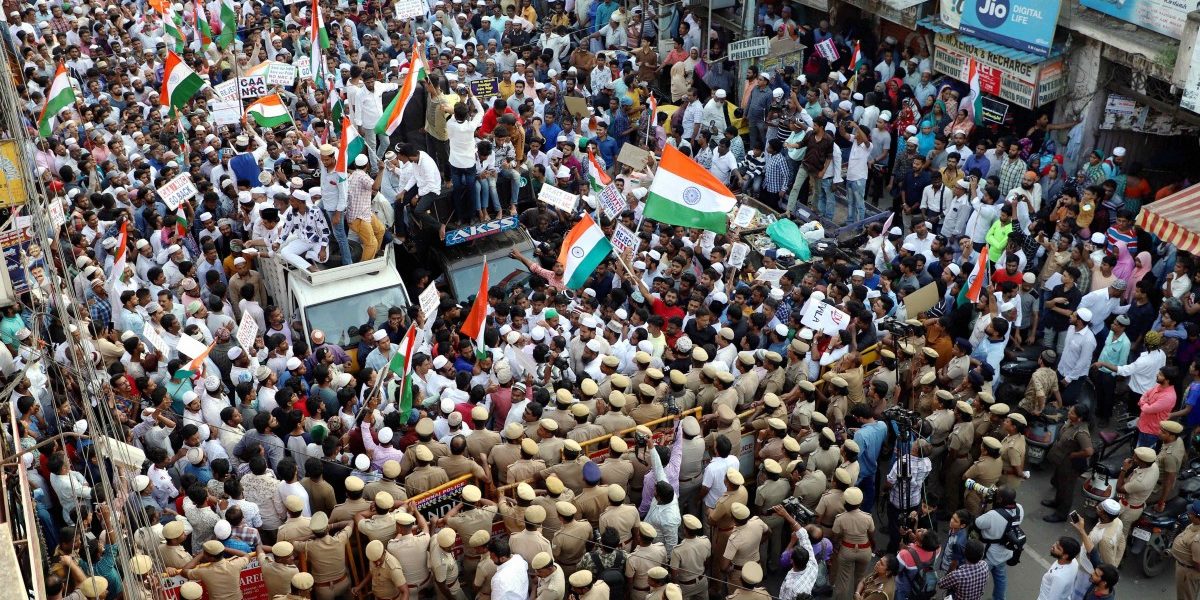 The Bharatiya Janata Party has a mode of politics that has little use for deliberation once it gets into power. The party is adept at staging well-funded election campaigns that are marked by anti-Muslim rhetoric, fake news and dog whistles, and once elected, it tends to drown out everyone else’s voice. Mainstream media is tamed, industry leaders experience fear, universities are repressed and parliamentary discussion counts for little as the Narendra Modi government has the numbers to push through legislation.

The Indian people are now, however, insisting on talking back – judging by the nationwide protests on December 19 and thereafter.

It is unclear how this situation will evolve hereon. The BJP has reasons both to be smug and to panic. It may assume that the “real India” has no truck with middle-class liberals rallying in the streets, and like Donald Trump’s supporters in the US, it can expect Modi’s base to ally with him, regardless of what the critics say.

A sense of alarm is also evident going by the arrests and the brutal crackdowns on students and protestors in Delhi and Uttar Pradesh. The number of protestors may be small but a determined counter-mobilisation in society has begun and nothing terrifies the party more than the power of a spectacle that can galvanise the public; it would, after all, have vivid recollections of what the India Against Corruption (IAC) movement did to UPA-II. Equally, the BJP will also be seeking a compelling image and a plausible narrative of protester excess and wait for the tide of majority opinion to change.

The government, meanwhile, remains firm on implementing the new citizenship law. Home minister Amit Shah had made it clear that implementation of the Citizenship Amendment Act (CAA) will be followed by the National Register of Citizens (NRC) throughout India that will be concluded by 2024 – though the party seems to be on the backfoot now.

Also read: A Letter to India from a Student Protesting the Citizenship Amendment Act in Assam

What the NRC actually entails in experience is still unknown. The government is yet to announce which documents would be acceptable to qualify for citizenship. ANI, the news agency, published a curious non-gazetted “fact sheet” released by “government sources” on the NRC. This fact sheet, which was also released by the Press Information Bureau, has no official status, but it strains to clarify that the CAA and the NRC are separate processes and that no one will be denied citizenship on the grounds of religion. It, however, leaves no doubt that everyone in India will be swooped up in the exercise of proving their citizenship to the government, by furnishing a yet unknown list of documents. The sheer brazenness of the government in inflicting anxiety about citizenship status on millions of (largely poor, uneducated) Indians while they are struggling with livelihoods amid a tanking economy is simply breathtaking.

Some have suggested that the nationwide NRC will be different from the NRC in Assam. As argued by Shoaib Daniyal, everyone in Assam had to submit an application to be included in the NRC. The NRC was published and those who were excluded could appeal by providing further documentation. The nationwide NRC will on the contrary, specialists say, will be based on the National Population Register (NPR) that is compiled by a house to house enumeration – after a which a list of doubtful citizens will be prepared, who can then take part in a “claims and objections” process.

Regardless of which process is applied, it is clear that the NRC process has been conceived in a manner that spares Hindus, for the most part, the trouble of proving they are Indian citizens, since the CAA eventually offers pathways to Indian citizenship for them in a way that it does not provide to Muslims.

The NRC serves to produce several far-reaching social effects. From BJP’s vantage, the NRC promises to have a profound impact on the consolidation of a Hindu identity that transcends caste divisions. History suggests that large-scale social engineering policies targeting a minority have a tendency to reinforce majoritarian identities.

To take an example, Serene Jones, a theologian, recently spoke about how white identity was constructed where she growing up in the American South. She mentions that when Jim Crow laws were passed in US states segregating blacks and whites – those who were not black, even if they had Cherokee origins, had to sign documents declaring themselves to be “pure white” to claim title to land they possessed. In other words, non-black individuals had to assume a white identity in order to avoid the violent exclusion meted out to African-Americans.

Likewise, the massive nationwide churning that the NRC will provoke, wherein one side is accorded a pre-existing legal advantage, will also yield a firmer sense of being a Hindu across the country, regardless of the substance of religious observance. If Hindu identity has hitherto been marked by family belonging, or a form of fluid religiosity, wherein faith extended beyond religious boundaries, it will now also be anchored in the experience of privilege in a bureaucratic process. Collective and individual insulation from dispossession, through a long-drawn, torturous process, becomes the agent for a sharply-defined religious identity, which is exactly the outcome the BJP wants.

The CAA+NRC will also tear India’s social fabric in newer ways. Delhi chief minister Arvind Kejriwal has said that 70% of Indians do not have documents required for citizenship and so the chances of millions, particularly minorities, being excluded in the NRC is quite high. The effects of this will be devastating. Journalist Ravish Kumar has pointed out that localities across India will now be rife with discussions on Hindu-Muslim issues because of the dynamics of inclusion and exclusion that will mark the aftermath of a published NRC.

The NRC will threaten to snap the associational life between Hindus and Muslims. The former will find it increasingly difficult to relate to Muslims who have been deprived of citizenship. It may even become illegal to do business with those declared as aliens, thus effectively imposing an economic boycott on them. The relentless hate speech material on WhatsApp about Muslim population will serve to distance communities further and the next generation – that will be less exposed to the experience and memory of sharing living spaces with Muslims – will come to see them as hostile aliens.

There are other consequences of the NRC to be mindful of. Those declared non-citizens will either be moved to detention camps or live out their lives as stateless citizens. This would entail stripping of voting rights for potentially millions, in effect turning the NRC into a vast gerrymandering exercise, in ways that can be beneficial for the BJP. BL Santosh, a BJP-RSS leader from Karnataka, recently said the concentration of Muslims and Christians in some areas is dangerous, and stated that “this has to be resolved.” Rendering minorities stateless in key constituencies and handing out citizenship to groups that can vote for the BJP, as the party plans to do in Bengal, would be one way of dealing with this.

The NRC will be the latest of the harassments that Muslims have faced in India in recent years. They were first turfed out of many neighbourhoods as people refused to rent or sell homes to them in major cities and small towns, as the narrative of terrorism took hold. Second, they were forbidden to fall in love with Hindus through the ‘love jihad’ campaign. They have been subject to lynching and constant hate speech on social media. Muslim communities now find themselves, in the midst of protests, ring-fenced by police action and mob violence and will soon be caught up in the production of national illegitimacy through the NRC, if the appalling experience of Assam is any indication of what’s in store for the rest of India.

The net result will be heightened polarisation, risk of mass violence and the creation of Muslims as the new ‘untouchables’, disenfranchised in real and symbolic terms, culturally distant, and maligned when they protest for their rights.

The CAA and NRC are together for these reasons the greatest acts of social poisoning contrived by a government in India since the British introduced the census in 1872, which began the process of hardening religious boundaries, which set the stage for the Partition in 1947.

India can scarcely afford this form of turmoil. The students and other citizens on the streets are those who are trying to spare India the chaos the BJP has in store for the country.