Treating this as just another crime amounts to reducing the gravity of the sinister machinations. Tomorrow the hatemongers will easily find another way of harassing Muslim women online. 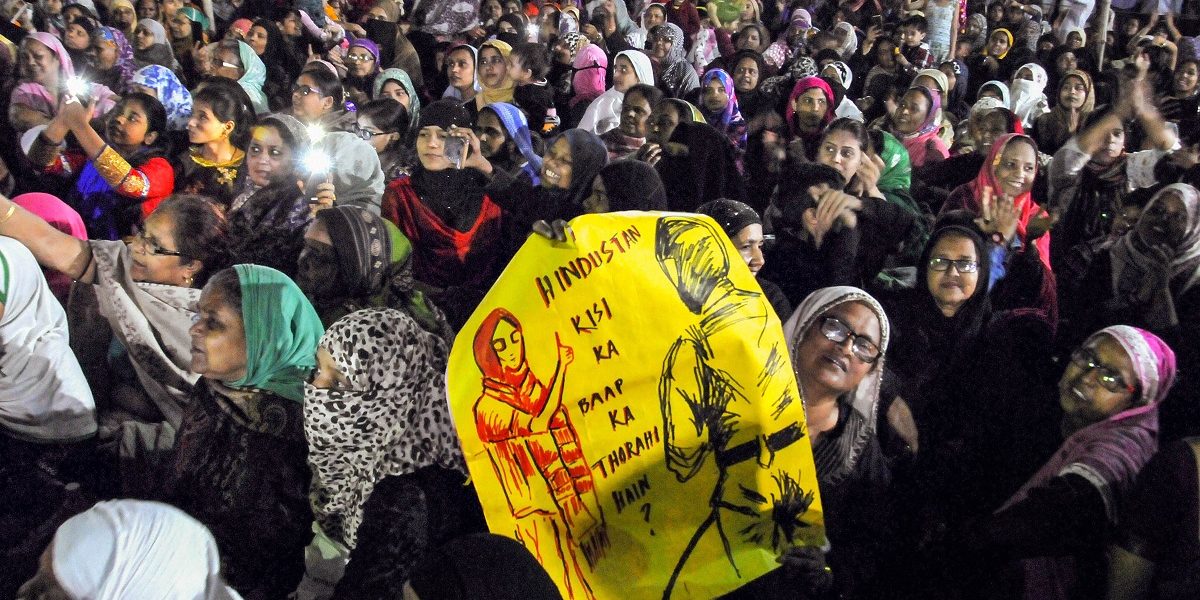 Women and their families participate in a dharna for 12 days to protest against NRC, CAA and NPR at Park Circus Maidan,in Kolkata on January 18, 2020. Photo: PTI

Last week, the dignity and personhood of Muslim women was targeted once again by putting them up for online ‘auction’ by an app called ‘Bulli Bai’ on the platform GitHub. A first information report (FIR) was registered in Delhi and Mumbai and two persons have since been arrested.

In a similar incident last year, an app called ‘Sulli Deals’ had taken publicly available pictures of mostly Muslim women and created profiles, describing the women as ‘deals of the day’. On October 30, 2021, the Internet Freedom Foundation (IFF) had reported that even 118 days later, in spite of the furore and two FIRs having been lodged against it, no arrests had been made. Not surprisingly, they have still not been arrested.

The words ‘Sulli’ and ‘Bulli’ are obvious distortions of the derogatory word ‘Mulli’ for Muslim women. The idea of distorting the word was to ensure that the host platform does not deny uploading the content in case it happens to check-up its meaning on Urban Dictionary.

‘Bulli Bai’ and ‘Sulli Deals’ must not be regarded as mere cybercrimes, as the police and the government would like us to believe in their fire-fighting mode to contain the damage before the elections – nor are they the handiwork of a few perverted individuals for some kicks. Had they been doing it for kicks, they would have broadened their base to include women from elsewhere too. Since most of the victims are Muslim women, the intent was clearly to degrade and humiliate them.

Inflicting a ‘social defeat’ on Muslims

Communal hatred in today’s India has now risen to such a pitch that open calls for genocide of Muslims are being made from public platforms like the Dharma Sansad at Haridwar.

However, the hatemongers also know that in spite of their fervent desire to do away with the Indian Muslims, it is just not possible to eliminate 200 million people. Even in the Second World War, the deadliest military conflict in history, less than 85 million people were killed in nearly six years.

However, they do know that they can indeed manage to humiliate 200 million people, day in day out. They also know that, quite often, humiliating the defeated is more pleasurable than killing him outright and humiliation is often worse than death for the defeated.

As I have written earlier, such incidents are a part of a sinister design to debase Muslims, humiliate them, de-humanise them, injure their dignity and self-respect so much that they come to accept their existence as ‘vanquished people’, if not sub-humans (the Untermensch of the Nazis) – surviving at the mercy of the majority in a land they are ‘historically’ not entitled to stand on, as per the Hindutva ideologues.

The ultimate objective of these hate and humiliation campaigns is to wear Muslims down to the point that they are forced to accept a sort of ‘social defeat’. Having started with the process of ‘othering’, the idea is to force them first to accept a ‘second grade citizen’ status and finally the status of ‘nowhere people’. The grand design is to break their very will to live with self-respect, dignity and honour.

There is a clear strategy behind targeting well-placed, well-educated Muslim women. In the Mahabharata,  the Kauravas’ idea of summoning Draupadi to the assembly – instead of merely seizing her, as they could have given their numerical strength – was to insult the ‘manliness’ of the Pandavas, the fount of their self-respect.

When Draupadi pointed out to Dushasana that she, being the daughter-in-law of the Kuru dynasty, could not be insulted thus, he said that she had been rendered a slave-woman with no honour (Sabha Parv, Mahabharat). That is, by reducing her to the status of a slave-woman, they stripped her first of her dignity; her subsequent physical disrobing was a mere formality.

The modern-day hatemongers are doing the same thing to Muslims. It is not about targeting journalists, activists and articulate Muslim women in particular. Insulting well-placed Muslim women conveys to all other Muslims that if the honour of even those women can be violated, where do ordinary Muslim women count? That’s why in ‘Sulli Deals’ they targeted a Muslim woman pilot who never got into political debates or fights.

A war on the mind, similar to what terrorists seek to do

It is actually a war on the mind. They know how to hit and where to hit so that it hurts the most.

In this sense, it is quite like a terrorist strike. The terrorist also attacks the ‘mind of the target country’. They know that they cannot bring a country down to its knees even by a hundred bomb explosions. However, their strength lies almost entirely in the psychological impact of their strikes through the reactions amongst the people and most importantly, in the media.

Their purpose is more than adequately served the moment media starts endlessly playing the tagline ‘country rocked by explosions’; showing visuals of the place; interviewing the injured and the survivors, police officials, and self-styled explosive experts; advancing theories on real or imaginary terrorist groups behind the attack; conjecturing about the design of the bomb and how the ISI might have provided the design; sketches of the suspects; and how the country lies helpless before the terrorists.

In the end, a nation is defeated by the “fear” and not the fire of terrorists.

The design of the terrorist is to manipulate the target’s psychological perceptions to induce it to act in the way it is predisposed to act by instinct. This was the design behind the fulminations made in the Haridwar Dharma Sansad too. In that case, one of the objectives, as I had pointed out in an earlier article, was to provoke some Muslims into making an irresponsible statement that could be misconstrued to mean as if they were threatening revenge on the Hindus.

The key to combating this assault on the dignity of Muslim women therefore lies in denying the hatemongers the psychological advantage they seek. If they want Muslim women to feel dejected and despondent by such acts, precisely that has to be denied by helping the targeted women stay strong and carry on the good work they have been doing.

Not just another ‘crime’ but a mortal ‘sin’

All those political leaders who don’t get tired of talking about ancient Indian culture and values from every platform forget that in this very country, Lord Krishna got 49 lakh (18 akshauhini) men killed to avenge the insult of one woman Draupadi. Had he so desired, he could have got only the direct culprits (that is, Duryodhana et al.) executed for the ‘crime’, but as the supreme godhead, he had to convey an enduring social message that insulting the honour of a woman is not a crime but a ‘sin’ and hence not negotiable. That is the real Indian culture and standard of morality.

As journalist Arfa Khanum Sherwani pointed out in an anguished, heart-rending tweet, we must not remain silent at this juncture merely because the women targeted do not belong to our families. It is a matter of national shame that such things are happening against ‘our’ Muslim women. This is once again the public disrobing of Draupadi taking place in another era, another form; the mortal sin, however, remains the same. History shall never forgive us if we remain silent and fail to stand by them to keep them strong.

Dr. N.C. Asthana is a retired IPS officer and a former DGP of Kerala. Among his 49 books, the latest book State Persecution of Minorities and Underprivileged in India has been reviewed by Justice J. Chelameswar (Retired) of the Supreme Court.