A celestial weapon, the bulldozer will deliver a truly 'swacch' Bharat. 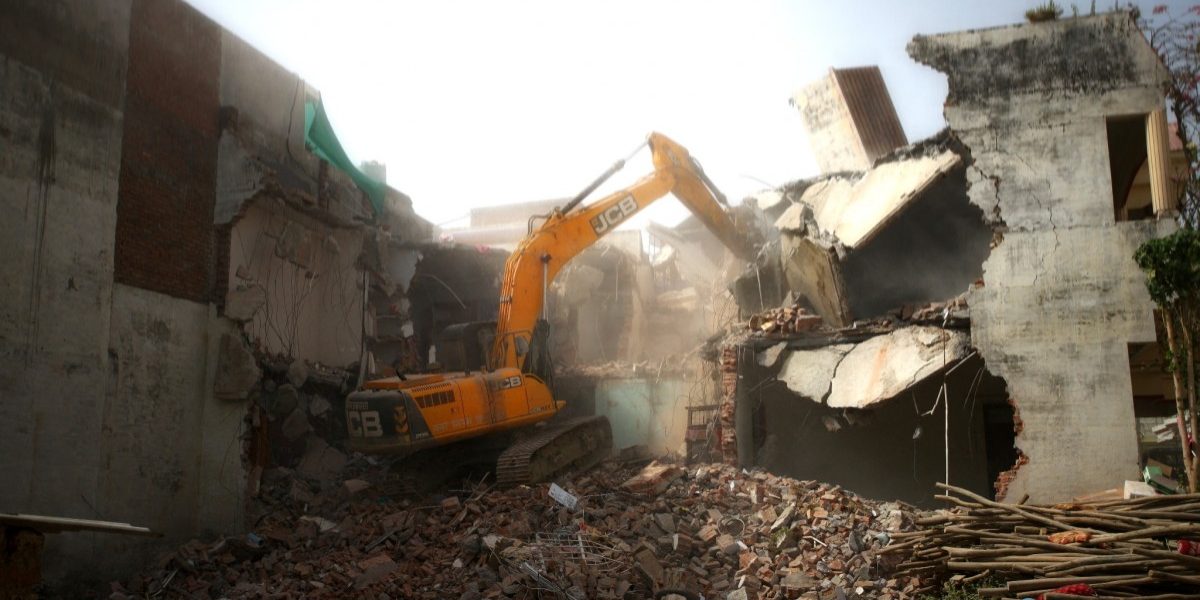 In the beginning there were the gods (here and there a goddess), menials, and masters.

The masters corrected the menials, mostly with whiplash and starvation.

And the gods corrected the bloated masters with sundry weapons: Zeus with the thunderbolt, Krishna with the sudarshan chakra, Shiv with the trident (on occasion with the fatal third eye), and Ram with the bow and arrow.

In course of time, the menials became people.

The gods receded (despite the promise that they would return when things went bad again – yada yada ye dharmasya, etc.). The masters fought battles for supremacy, but through steadfast work the people pushed the warlords back, forging republics and constitutions.

After Independence from colonial rule, a liberal Indian leadership came to make the citizens feel they were the real masters.

Protesters, political opponents, loud critical mouths, free-thinking academics, journalists were given far too much room to berate the matrabhoomi.

Funnily, India’s first prime minister went so far as to set a most deleterious example.

He took to writing anonymously, critiquing his own dictatorial inclinations.

Most wretchedly, this criminal class of liberals propagated that the protection of minority rights was the litmus test of any republican democracy.

This history of appeasement led to a situation where the 80% majority was consigned to insecurity and a gnawing sense of victimhood.

Clearly, the republican constitution and the systems of equitable justice it enshrined was responsible for this most reprehensible outcome of Independence.

The re-appearance of god

Thus it was that fresh confabulations took place in Vaikunth Lok.

It was sadly agreed that the time for a new avatar to descend bang into the land where Bhagwan Ram had in Trityayug made his benevolent appearance.

And, the avatar did descend; the gods christened him Shri Ajay Bisht, soon to bloom into Yogi Adityanath.

Presto, he surveyed the state of affairs, sought blessings from Bhagwan Ram, and determined to forge an alternate system of justice – alternate to the decrepit constitutional one, wherein the courts from bottom to the top lumbered on for aeons, unable to deliver speedy comeuppance to those whom everybody already knew to be criminals.

After all, more than any evidenciary rigmarole, it is the leader who is in a perpetual state of grace who most truly identifies the culprit, without the aid of due process and suchlike liberal hogwash, calculated to protect only a minority community who, like the old Kauravas, are never upto any good.

The crucial thing, then, for the new avatar was to fix upon a new weapon of correction that would not seem a plagiarism of the old ones that Zeus, Shiva, Krishna, Parshuram, or even Ram employed.

The Yogi went into a trance, and, behold, the bulldozer was born.

Thus, a Javed Mohammed and his dear wife and children may have thought nobody would be wise to their a priori proven guilt, or that the courts would step in to protect their innocence in good time, the man-in-grace knew the house belonged to Javed, even if it was legally in his wife’s name, that notices had been served to him in good time, although no notices were served till just 12 hours prior to you-know-what, or that such notices even if served ought to have been served to his wife, the owner of the house-to-be-subjected-to-correction, or that no untoward materials had been found in the house when emptied before correction, the man-in-grace determined that the target bore the wrong name, espoused wrong opinions, carried influence within the wrong community, and thus was ripe for demolition.

Out came the new celestial weapon, the bulldozer, and before you and I could bat an eyelid, or a court of coloured law mess with the perfidy, swoosh, what was a house became a no-house rubble.

Acolytes among the praja and among the media clapped with approval: thank god, a new executive authority had finally surfaced that at once also assumed the authority that had thus far been given erroneously to the slovenly judges who, more often than not, took the side of the culprits.

Welcome to new India where the bulldozer will sweep clean the invading muck of centuries and deliver a truly swacch Bharat.