The Ease of Killing a Policeman in Adityanath's Uttar Pradesh

Bulandshahr was just waiting to happen. In the past four years we have promoted a culture of intimidation and violence, prioritising the mob and its demands over the rule of law and its guardians. 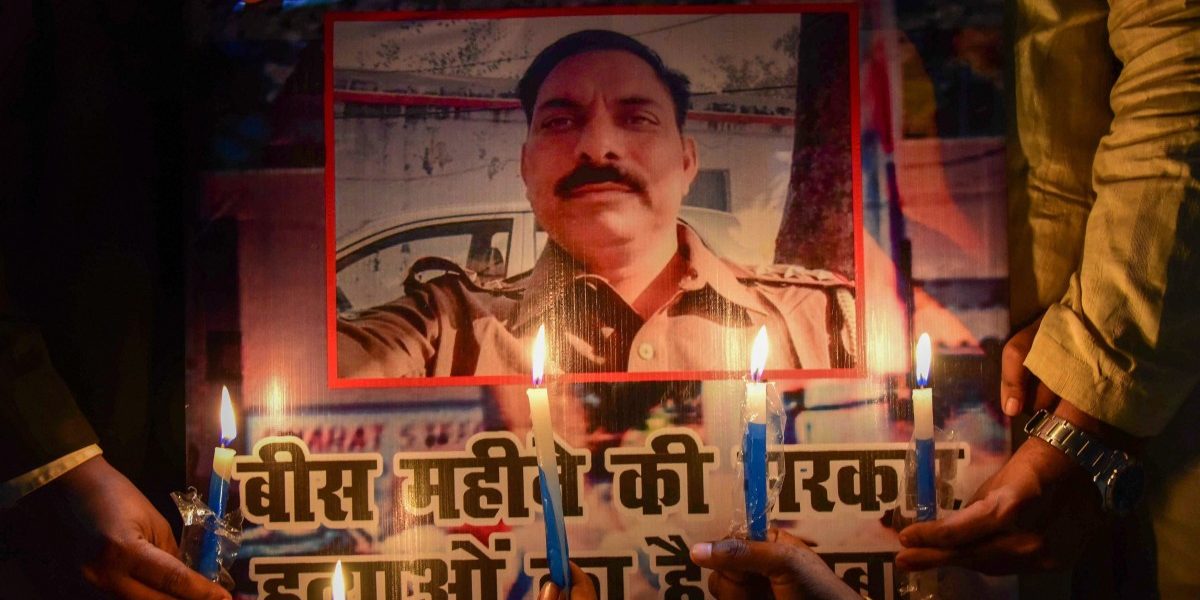 A warning shot has been fired. The bullet that killed inspector Subodh Kumar Singh in Bulandshahr carries a chilling message for every policeman and policewoman across the nation: don’t mess with the Hindutva warrior, he is armed with a gun. And this is New India, where impunity has already been granted to one and all for killing any Muslim in the name of protecting the cow. Now, an entitlement is being claimed for meting out mob justice in defence of the cow.

The warning is unmistakable: police officers who dare to stand up to the lumpen ‘gau raksha’ mobs and try to enforce the law do so at their own risk. And the risks will multiply. May be the nation has been repaid a hefty Yogi Dividend.

Perhaps it can be argued that ruling India is no longer just the business of a Narendra Modi-Amit Shah holding company. A new, aggressive partner, Yogi Adityanath, has crow-barred his way into this exclusive partnership. No doubt, the Uttar Pradesh chief minister has infused new energy and new verve in an otherwise bankrupt and faltering enterprise; suddenly, this mofussil man has become the defining voice of the New India, and he is painting the Modi dispensation in the colours of his own medieval nastiness.

Yogi Adityanath is an incongruity in any civilised, modern polity, and his ascendancy to the Uttar Pradesh gaddi mocks all our pretence at being a ‘world power’. Yet this mahant has been elevated as a star campaigner in the Madhya Pradesh, Chhattisgarh, Rajasthan and Telangana assembly elections; he seems to have been armed with a licence to inject communal venom and divisiveness, all cynically aimed at preserving the BJP’s crumbling Hindu vote-bank.

It should be no surprise that the Yogi’s onward march has worked up a stink beyond the poll-bound states. The Uttar Pradesh chief minister has managed to carve out a national presence only because the Modi regime’s romance with violence has prepared the nation for Yogi’s blunt messages. In the past four years, mobs have been empowered as an instrument of intimidation and retribution.

The ceaseless invocation of “terror,” Pakistan and Islam has produced a psychology of implacable anger and animosity towards India’s own minorities. Starting with the discovery of ‘sedition’ at Jawaharlal Nehru University, we have established a protocol that anyone suspected of lacking in deshbhakti can be placed at the mercy of the ‘nationalist’ mob; suspects can be lynched on campus and in television studios. And recently, we have discovered the overriding appeal of aastha, or faith, which must be asserted in the streets and in defiance of the apex court when necessary.

In this officially sanctioned climate of retaliation and vengeance, it was only natural that a mob of ‘gau rakshaks’ should have shot dead police inspector Singh. The killer mob must have felt totally at ease in Yogi’s Uttar Pradesh.

The Modi dispensation has brought to India a new ease of killing policemen, just as it has the much touted ‘ease of doing business’ in India. We must wait for those hired economists and other pamphleteers at the NITI Aayog to square the two “eases”, but it can be easily predicted that the global community is not going to be exactly thrilled with an India that is degenerating effortlessly into a battleground for settling medieval scores.

No foreign businessman is going to come and ‘make it in India’ if the headlines continue to sizzle with reports of violence and lawlessness. And, the Modi-Yogi-Shah regime would not be the first cabal to over-estimate its capacity to roll-back marauding crowds. No regime has ever succeeded in calibrating mobs on the streets.

Whatever narrative the Sangh parivar spin-masters may be able to invent for the cold-blooded murder of a police officer, the reverberations from Bulandshahr will continue to linger. We do not know if the emergence of Yogi Adityanath as the new mascot of our New India has caused any disquiet among all those who desperately want to believe in Modi and his promise of economic modernisation. For many of them, their hopes stood belied when Modi inflicted on India that experiment in Fiscal Maoism called demonetisation. Every businessman is discovering that the dreaded inspector raj is back with a bang. And now, we have Adityanath mocking the dreams and designs of the ‘Modi-the-moderniser’ constituency, located mostly in Corporate India.

Also read: How BJP Leaders Are Using Ramleelas to Further Their Political Agenda

While the corporates have insulated themselves in their own islands of security and prosperity, it is the vast middle classes who would be frightened to the very core at the prospect of empowered mobs gunning down police inspectors. They may have a very justifiable anxiety about terrorism from across the border but they can be relied upon to figure out for themselves that what happened in Bulandshar was terror in the streets. This kind of killing will not be acceptable to them.

India’s middle classes – who are, incidentally, overwhelmingly Hindu – desperately crave stability and peace in their neighbourhood, in their city and in the nation. They want to be assured of some kind of peaceful order prevailing. Because they are keenly conscious of the precariousness of our civic order, they have a vested interest in preserving the efficacy and ability of the policeman to uphold the magistracy of the law. They frown upon and disapprove of all those who appear to be countenancing lawlessness.

They can see that lawlessness and defiance of the courts seem to be main working principles in New India. The Modi-Yogi-Shah dispensation is quietly encouraging the ‘mandir crowd’ to ratchet up the truculence in Ayodhya. It is this cynical molly-coddling of assorted sadhus and sants, all chanting the ‘aastha’ mantra, that has emboldened the murderous mob in Bulandshahr. What should be truly worrisome to the middle classes is that the gau rashak’s violence and intimidation have come to be valued as tools of electoral mobilisation.

The message from Bulandshahr is that our new saviours in this New India will go to any length to try to perpetuate themselves in power, even if it means unleashing chaos and violence in the cities and villages across the land. This all adds up to a calculated suborning of public authority, inspired from above. Bulandshahr today, India tomorrow.