As Killings, Laws and Arrests Show, Blasphemy Obsession is an Indian Problem, Not Just a Muslim One

Lynchings over the past few years tell us the vigilantist desire to punish someone for having violated something dear or sacred to oneself is not unique to Islam – or even to religion for that matter. 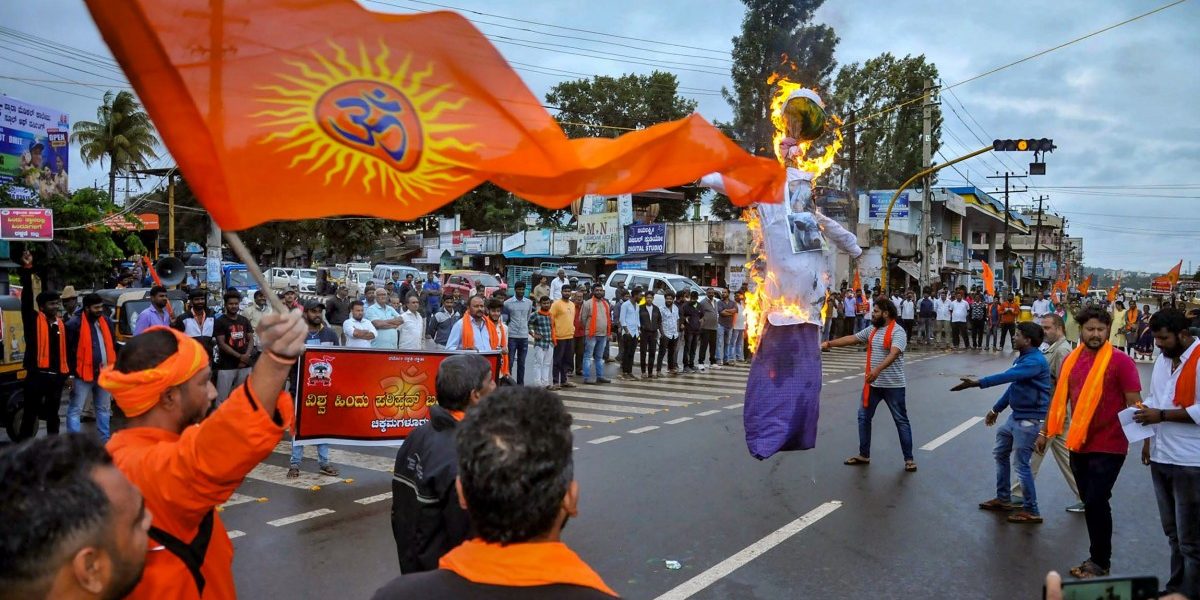 Vishva Hindu Parishad (VHP) and Rashtriya Bajrang Dal activists burn an effigy during a protest against the murder of tailor Kanhaiya Lal in Udaipur, in Chikmagalur, Thursday, June 30, 2022. Lal was murdered Tuesday at his shop by two men for allegedly posting a social media statement in favour of suspended BJP spokesperson Nupur Sharma. Photo: PTI

Pratap Bhanu Mehta is right when he argues, in a recent Indian Express article, that the gruesome murder of Kanhaiya Lal in Udaipur should not “allow concerns about authoritarian repression and majoritarian communalism to be overtaken by an obsession with transnational Islamism”. Yet, he asks us not to shy away from understanding “the possibilities and sources of Islamist radicalisation, and acknowledge that like Hindutva, it could also have an autonomous dynamic, not rooted only in reaction or the threat of subjugation”.

Mehta is not wrong. Often we present our ‘himsa’, or violence, as ‘pratihimsa’, or counter-violence. The root of my violence lies not in me but you – that is how all violence is justified. Even the most violent like to present themselves as inherently tolerant persons forced to deviate from their original path of peace by violence or provocation from the other side. So, if I am to shun violence, you have to change first.

In the wake of the brutal Udaipur killing, this is the way the debate in India is going: Muslims, their religion and its holy book are inherently intolerant and violent; only if they and the nature of their religion changes will the ‘counter-violence’ against Muslims that we have seen in the past few years stop.

By their stated admission, Kanhaiyalal’s killers were driven by the belief that blasphemy must result in capital punishment and that true Muslims are duty-bound to punish those they believe have violated the honour of the Prophet or the Quran. This is the position that Islamist radicals around the word take. If the state does not have a provision for executing those accused of  blasphemy (India) or is unwilling to implement it in a specific case (Pakistan – for Asia Bibi, whom Salman Taseer, the governor of Pakistan’s Punjab province sought to release), then the radical believes he is free to exercise this divine right himself. This was the belief that drove Mahmood Qadri to assassinate Taseer in 2011.

Mehta feels that this obsession with blasphemy limits the scope of freedom in a society. And if individuals feel they have the right to punish someone who has in their opinion blasphemed, then all life itself becomes very dangerous. He is, of course, right to note this. What we forget, however, is that the problem runs deeper than most of us are willing to concede.

Also read: A BJP Loyalist’s Indictment of His Party 20 Years Ago Comes Alive in Modi’s India

The vigilantist desire to punish someone for having violated something dear or sacred to oneself is not unique to Islam – or even to religion for that matter.  I recall a friend telling me about his experience with a ‘pure’ communist party. In 1989, the Chinese Communist Party had just crushed the Tiananmen Square revolt. News of someone defacing the photograph of Chairman Mao with ink or colour had also come in. This incident came up for discussion in a meeting of the party. One of the leaders said that the person who had done it deserved capital punishment. It was blasphemy, no less. Punishable by death. My friend shuddered when he heard this opinion, which none of those present dared to oppose, even if some of them disagreed with the suggestion.

Instead of acknowledging the wider dimension of this mindset and debating ways to counter it, many of us have reacted to the horrific killing in Udaipur by discussing how the problem of blasphemy in Islam is antithetical to the notion of a free society. Not surprisingly, this debate has encouraged anti-Muslim propagandists to say that the incident proves that Islam is dangerous as it contains the notion of blasphemy.

The obsession with the ‘intolerant’ nature of Islam is so deeply rooted in our collective consciousness that this one incident may become a pretext for some of us to shift our attention from the systemic persecution of Muslims to the fear of Indian Muslims being radicalised. The fear of Islamist radicalisation has, however, always been there in India – even when BJP leaders like Rajnath Singh patronisingly say that ‘our Muslims’ have rejected it or an enlightened person like Naseeruddin Shah takes pains to differentiate between the Indian variety of Islam and the Islam practiced outside India. The implication is that the Indian version is open, tolerant, diverse, whereas international Islam is a closed system and radical. What is said here is that there is something about India which has softened even a religion like Islam and humanised it – that Islam is inherently intolerant and violent and needs fundamental reform to exist in a civilised society.

The argument one hears is that India is a land of multiple truths and thus the notion of blasphemy is foreign to us. Whereas Islam’s belief in a single truth makes the concept of blasphemy intrinsic to it. Of course, this argument does not explain why it is then that Mohammed Zubair is in jail for supposedly insulting a Hindu god while the BJP’s Nupur Sharma – accused of insulting Islam’s Prophet – is not.

This argument also conveniently ignores the killings that have taken place routinely because of the “offence” caused by Muslims eating beef or killing a cow or entering into union with a Hindu woman or converting Hindus to Islam. India actually has laws which prohibit cow slaughter, beef eating and conversion without government sanction. Inter-faith marriages too are fraught with the risk of prosecution. These laws have helped the Indian state to imprison and persecute Muslims and Christians. And non-state actors – citing offence to their religious or nationalist sensibilities – have lynched Muslims and Christians. For some reason, however, these pretexts for violence – and the laws which criminalise acts that supposedly offend Hindus – are not seen as equivalent to the blasphemy obsession that is said to be unique to Islam.

One can go further and say without any exaggeration that there is a part of the Hindutva ecosystem for which the very existence of Muslims in India is seen as blasphemy. A Muslim can be killed for being what she is, not for what she does. A Muslim born is dangerous for India. The whole discussion on the birth rate of Muslims does not sound obnoxious to us. We participate in it, give arguments, present data to prove that Muslims are not being born in a number which should threaten Hindus. We have never thought about how humiliating this whole discussion is for Muslims.

The murders committed to counter this ‘blasphemy’ remain murders and do not fall in the more horrific category of execution, in which the killing of Kanhaiya Lal is rightly placed. In all previous communal murders, like the Udaipur one, the intent is to terrorise thousands by killing one. Terrorise them into silence. Terrorise them into submission. For example, the 2017 murder of Afrazul by a Hindu, Shambhulal Regar – in Rajsamand, from where the killers of Kanhaiya Lal were arrested. Regar did not shoot Afrazul to death. He was cut to pieces and burnt. Regar’s accomplice was a 14-year-old boy who filmed the whole killing with unflinching hands. The video was then distributed for mass consumption and celebration. Regar turned into a hero for many, thanks to the support of various Hindutva groups. Funds to support him legally were created; he was the subject of a tableau in a procession on Ram Navami. Before Afrazul and after him, many such killings or attempted killings were staged, performed and made available to those who wanted to enjoy the right to punish a Muslim without soiling or bloodying their hands.

What did this do? It shrunk the free space in society. While talking to Muslims of different age groups, I have realised that this continuous violence has convinced them that to remain alive and safe they need to conceal their views and even their identity. They have accepted unfreedom in exchange for life. 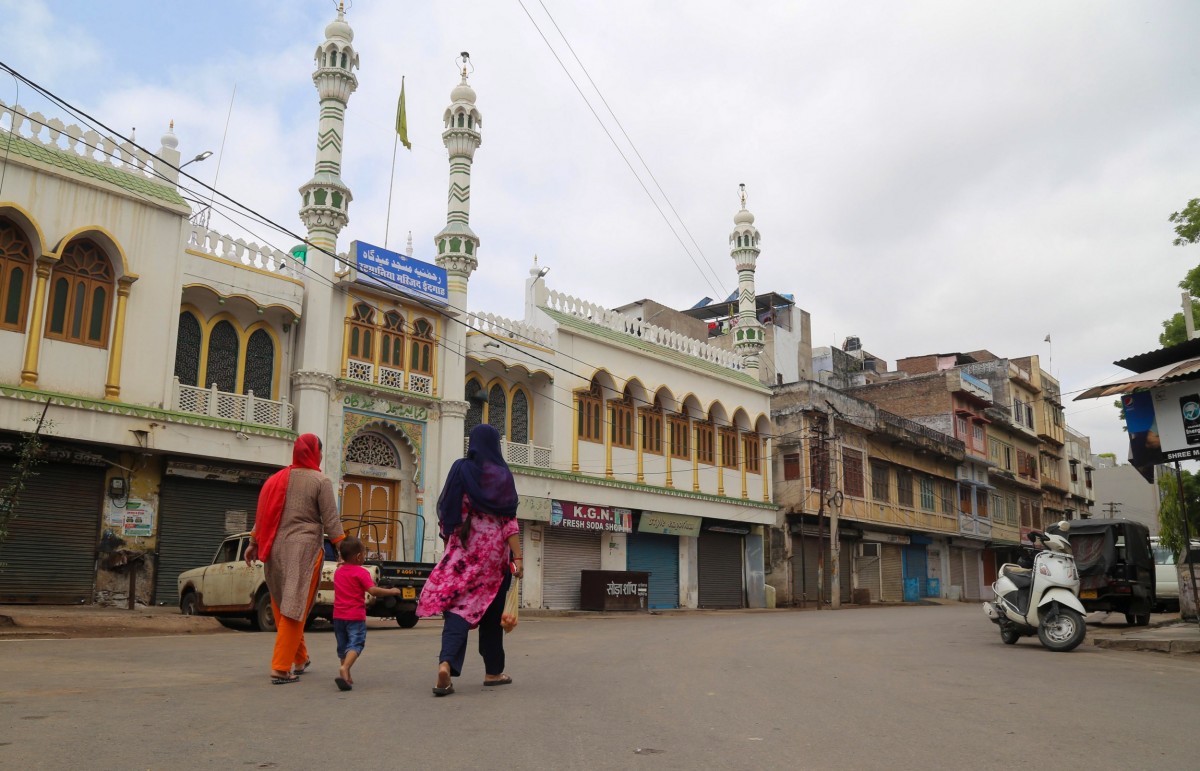 Pratap Bhanu Mehta asks whether we are committed to the idea of a free society. We should also add equality to freedom. Because without equality there can be no freedom. If laws increasing inequality are created or laws are applied in a discriminatory way, the talk of freedom becomes a farce. Or sounds hollow.

What is being demanded in the name of freedom is a right to abuse, insult and humiliate Muslims. The Hindutvavadis demand a right to critique the life of the Prophet and the Book so that the Muslims see the truth and reform themselves. They reject the condemnation of this murder by Muslims of all hues. As in the past, they say that Muslims are not honest when they verbally condemn the act of violence by one of their community. Their condemnation will be credible only if they edit their Book or are ready to hear condemnations of their Prophet. It is not one in a million who do this. In an India which is now more a WhatsApp nation than a physical entity, thousands of such insults are issued daily. Open rallies are held abusing the Quran and the Prophet. Mehta is not wrong in hoping for a world These abuses cannot be rendered “banal, marginal and harmless” – the ideal world that Mehta and many of us hope for –  when whole ‘dharam sansads’ are held calling for the mass killing of Muslims. What happens to a free society when there is absolute freedom to call for genocide?

Also read: Zakia Jafri’s Case is Reminder of How the Guilty of Gujarat Subverted Law

Muslims know that taking offence for an insult to the Prophet and reacting violently is not going to change their situation. They are not going to fall into the trap laid by the likes of the killers of Udaipur.

Contrary to what many might think, the horrendous murder in Udaipur has not instilled fear in those who revel in insulting Muslims. This much was evident in the rallies taken out to condole the death of Kanhaiya Lal – when slogans abusing Muslims or calling for their death by butchering them were shouted without any fear. These rallies are not really a response to the Udaipur killing. They are a continuation of the gatherings which took place in Delhi and elsewhere where open calls for slaughter of Muslims have been given. This inequality before law needs to change. Only then will the idea of a free society look credible.