Rana Pratap had an Afghan general, while Shivaji, who is being shown as a Hindu icon, was fighting the Mughals for political and regional assertion – not Hindu consolidation.

Ayodhya: An artiste dressed up as Lord Rama arrives by a chopper for Deepotsav celebrations in Ayodhya on Wednesday. PTI Photo by Nand Kumar (PTI10_18_2017_000083B) 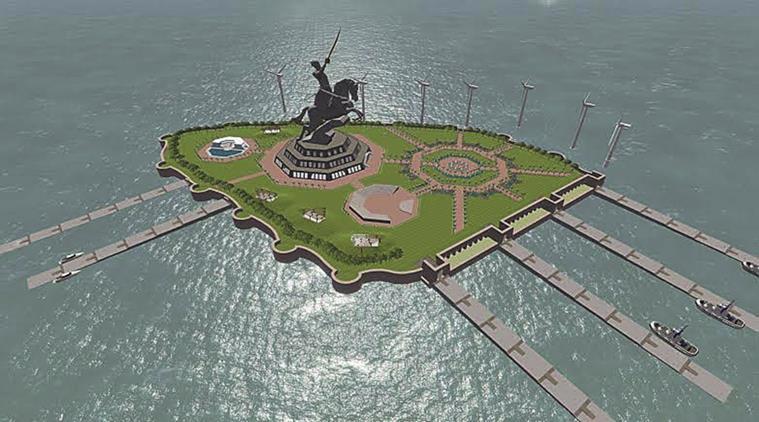 On Diwali morning, the nation woke up to front page drama. Photos of actors dressed as Ram, Sita and Laxman, descending by helicopter on Ayodhya, were splashed by the dailies. Uttar Pradesh chief minister Yogi Adityanath carried out a symbolic coronation of Ram while the helicopter flew overhead showering flowers on the gathering.

Only a few weeks ago, Yogi Adityanath had announced that a grand statue of Lord Ram would be built on the banks of the Saryu river in Ayodhya. The Centre immediately approved a grant of nearly Rs 134 crore for its construction as also for the development of Ayodhya as a tourist hub. The statue, which will be over a 100 metres tall, may ultimately cost several thousand crores, say experts. However, before it begins work, the state government is playing it safe and is awaiting a clearance from the National Green Tribunal.

Meanwhile, work is in full progress on the construction of a Chhatrapati Shivaji statue in the Arabian Sea off the coast of Mumbai. Projected as the world’s tallest statue, it will surpass the height of the Statue of Liberty in New York. It will also be taller than the statue of Sardar Vallabhbhai Patel being built in Gujarat by eight metres. The statue of Shivaji will be 210 metres high (as tall as a 12-storey building) and will cost over Rs 3600 crore.

The government also plans to build a library, an amphitheatre, an aquarium, an IMAX theatre to showcase short films on the Maratha warrior king, a hospital and a helipad for VIPs.

The memorial will evoke the architectural glories of the Maratha period, with replicas of the Tuljabhavani temple, the entrance arch of the Raigad Fort and forecourts modelled on Maratha palaces and wadas, the traditional residences of Shivaji’s time. When Prime Minister Narendra Modi conducted its bhoomipujan two years ago, water from rivers across Maharashtra and stones, soil and bricks from 19 locations significant in Shivaji’s life were brought to the site.

Also read: Yogi’s ‘Sarkari’ Deepawali Has Made Ayodhya Feel as Alone and Abandoned as Sita

Work is also going full steam ahead on the ‘Statue of Unity’ (SOU), a 182-metre tall salute to the Iron Man of India. A pet project of Modi, the statue will be installed on Sadhu Bet, an island three kilometres downstream from the Sardar Sarovar dam. This was touted as the tallest statue in the world but has been overtaken in height by the Shivaji statue. The SOU will cost the exchequer over Rs 3000 crore.

Of course, this project has been embroiled in an unseemly controversy after media reports that the job had been subcontracted to a foundry in China. Seven hundred workers at the Jiangxi Tongqing Metal Handicrafts Company, located in Nanchang province in eastern China, were reportedly employed in building the statue.

The ‘Made in China’ controversy led Larsen & Toubro to issue an official denial stating , ‘The entire statue itself is being built in India at the site and only the bronze cladding in the form of bronze plates is being sourced from China, which constitutes a negligible amount of less than 9% of the total value of project.’ 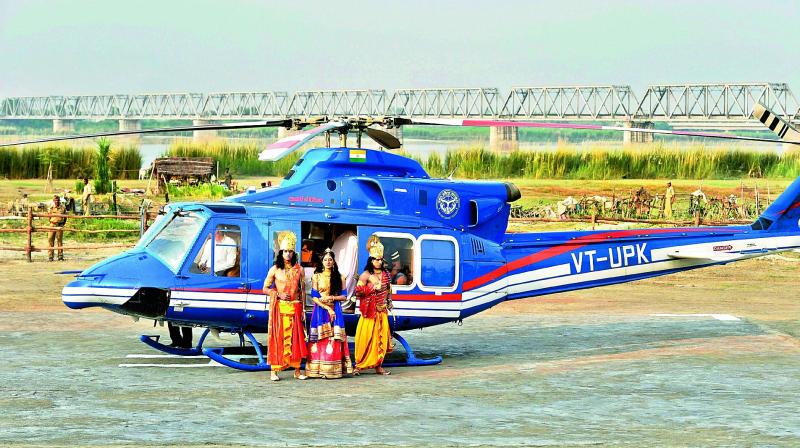 Artistes dressed up as Lord Ram, Sita and Lakshman arrive by a copter for Deepotsav celebrations in Ayodhya. Credit: PTI

Equally controversial is the Modi government’s decision to get leading public sector oil companies to contribute over Rs 121 crore towards the construction of the SOU as part of their corporate social responsibility spending for 2017. ONGC has contributed Rs 50 crore, Oil India Ltd and Hindustan Petroleum Corporation Ltd have contributed Rs 25 crore each while Indian Oil Corporation has donated Rs 21.83 crore.

The CSR management platform Goodera has revealed from the reports of 92 companies that Rs 155.78 crore was spent on national heritage initiatives in 2017 as compared to Rs 46.51 crore in 2016.

The story of the Shivaji statue is no better. The budget of this statue has already gone up 35 times from when it was first mooted 13 years ago. Economists have pointed out that this money could have paid for a micro-irrigation project in the driest parts of rural Maharashtra as also ensured the construction of thousands of kilometres of roads in this state’s rural hinterland.

The BJP’s statue spending spree has little justification when spending on the social sector is falling and the state of government schools, colleges and hospitals is abysmal. Contrast this statue extravaganza with how the Modi government has drastically cut funds for child health interventions from Rs 15,483.77 crore to Rs 14,000 crore in the last budget. The ICDS has seen a substantive cut in budget allocation from 0.74% in 2014-15 to 0.49% in 2016-17. The government has obviously forgotten that this program is feeding the poorest of the poor kids of our country. Similarly, MGNREGA which helps generate employment for 20 billion person-days has been hit with work days having substantially decreased because of lack of funds.

Also read: A Statue that Shows India Has No Room for its Tired, Huddled Masses

Is this a case of giving people circuses instead of bread?

Leading historian Aditya Mukherjee of JNU points out that there are two big messages being sent out by this spate of statues under construction. He says:

This is the BJP-RSS way of appropriating the nationalist legacy. Their problem is they have no nationalist heroes. Their hero is none other than Veer Savarkar who wrote letters asking for forgiveness from the British. They are trying to appropriate Sardar Patel, forgetting that Patel put 25,000 RSS workers in jail.

Their attempt is to merge nationalism with Hindu communalism but we must not forget that they are the chief enemies of nationalism. And because they have no heroes, they are going back, not to our nationalist past but to our mediaeval past.

The second message they want to send out is that Shivaji and Ram were anti-Muslim. They are doing this by trying to convert Hindu icons into nationalist icons.

Mukherjee points out the absurdities of Sangh Parivar myth making.

M.S. Gowalkar, the RSS ideologue, in his book Our Nation Defined said the North Pole was in India before it moved to the north. The BJP minister of parliament Sangeet Som makes the absurd claim that Shahjahan had jailed his father. Earlier, we had people like P.N. Oak who said the Taj Mahal was built by a Hindu king. Oak was regarded as part of the lunatic fringe. Som is in the same category but he is backed by state power.

Dr Rajat Datta, who specialises in mediaeval history at JNU, believes the present government wants to create larger than life iconic characters related to Hinduism which is why they have chosen Ram, Rana Pratap and Shivaji.

The BJP is trying to present Rana Pratap and Shivaji as icons of Hindu struggle against Muslim rule but that was never the case. BJP is only indulging in visual positioning. Rana Pratap was fighting the Mughals to defend his autonomy, so was Shivaji, but neither of them was leading a Hindu resistance (movement) against the Muslims.

History is very complex but for them history is how they imagine it. We cannot forget that Rana Pratap had an Afghan general while Akbar’s army was led by Man Singh who was a Kachwaha Rajput. Shivaji is being shown as a Hindu icon but he was fighting the Mughals for political and regional assertion. He never thought of Hindu consolidation.

Is Modi trying to appropriate the Gandhi legacy also? On the contrary, Datta believes, the prime minister wants to obliterate Gandhi. Citing the example of the Swatch Bharat campaign, he says Gandhi has been reduced to a pair of spectacles.

Gandhi staunchly opposed the partition of India and fought resolutely for Hindu and Muslim unity. Ram Rajya was more of a utopian concept for him. Gandhi’s Ram was an ascetic unlike the Ram of the RSS who is a militant warrior through which the Hindus’ martial spirit finds a voice.

Datta points out that Gandhi’s Ram did not have any caste linkages, he was not the epic Kshatriya warrior but an ideal ruler. Since the Sangh Parivar cannot appropriate Gandhi, they are trying to obliterate Gandhi, believes Datta.

Professor Shereen Ratnagar, archaeologist, whose work has focused on the Indus civilisation, points out another problem.

A statue has to be representative of something. In the case of Ram we have no visual template. What do we know of Ram, was he short or tall, what did he look like? In the case of our nationalist heroes are, their clothes are representative of the age they lived in, there is a signature, a representation. How are you going to dress Ram? Will it be based on the style of temple sculpture? Shivaji and Sardar Patel belong to a certain historical period but about Ram, we have no idea. It is because of this uncertainty that some historians have given Ram a very wide chronological age spanning many centuries.

Has the BJP taken a leaf out of Mayawati’s book? The Dalit leader ensured that UP is dotted with statues of Ambedkar and giant elephant statues that are the electoral symbol of her party. Dalit ideologues defend her statue building spree as an assertion of Dalit identity and pride, desperately needed by a downtrodden community trying to reclaim democratic space in today’s politics.

It is ironic that in Gujarat a downtrodden tribal population is paying the price for the Sardar Patel statue. Sadhu Bet’s displaced tribals oppose the construction of the Patel statue as they have not received compensation after being forcibly evicted. Local fishermen working off the coast of Mumbai point out that no public hearings were held for the construction of the Shivaji statue which is mandatory under the existing environment laws. But that is another story.