Even Sikandar Bakht, BJP Posterboy of Yesteryears, Would Know 'Love Jihad' Is Only a Ruse

When Bakht married a Hindu woman soon after independence, the Hindu Mahasabha had directed targeted attacks against the Qureshi community. 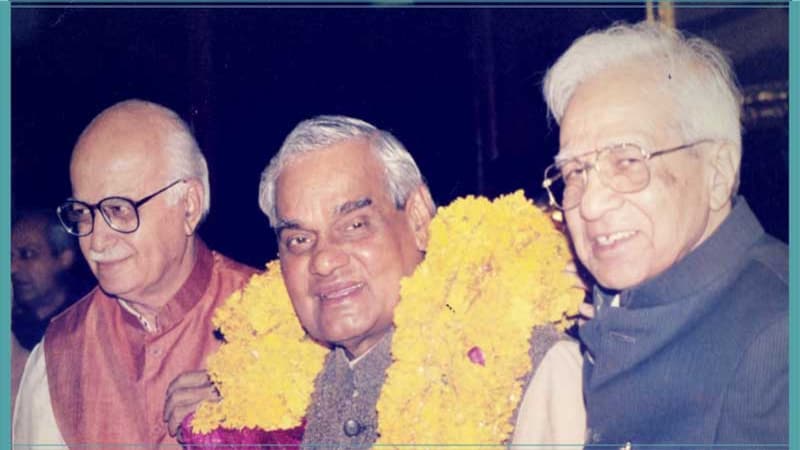 Decades ago, a young Muslim man and a young Hindu woman fell in love. They were both educated, and lived in the same neighbourhood in Delhi. India was barely three years into freedom. Noakhali was still a fresh memory.

The couple decided get married. Neither of them converted religions, and theirs was a civil marriage.

The Hindu Mahasabha was livid. Muslim men were endangering Hindus by luring their women away, they said. The young man happened to be associated with the Congress. The Mahasabha was both anti-Congress and anti-Muslim – and used this fiery formula to trigger a communal conflict. There were targeted attacks on the Qureshi community, of which the young man was a member, across Delhi.

Years passed. It was 1977. The Janata Party was formed. The Muslim man, now not as young, left the Congress, influenced by Atal Bihari Vajpayee of the Jana Sangh.

Sikandar Bakht was the first prominent Muslim in independent India to join what would eventually become the Bharatiya Janata Party. Hindu Mahasabha members, if they had any objections (and they did), kept these objections to themselves.

Nobody gave a second thought to the fact that Bakht’s marriage to Raj Sharma had roused the right-wing Hindu Mahasabha to launch and direct a communal riot in Delhi. Perhaps power erases bitter memories?

The modern-day BJP, and its Hindutva brigade, would consider Bakht a practitioner of Muslim ‘love jihad‘ to convert Hindu women. They are now trying to prevent future Bakhts by bringing in a legislation to show them their place: a place well outside the social fabric of their India.

Years later, in 2016, a young researcher, Nazima Parveen submitted her PhD thesis titled ‘Ideas of Homeland and Politics of Space: A Study of ‘Muslim Localities’ of Delhi’ to Victoria University, Wellington. After meticulous research, she put together the facts about Bakht’s marriage.

“An inter-religious civil marriage of an educated Muslim Qureshi boy belonging to Congress, named Sikandar Bakht, with a Hindu Brahmin girl named Raj Sharma, in May 1952, became a justification for Hindu nationalist forces to target [the] Qureshi community. The perception of danger arising from Muslim youths marrying Hindu or Sikh girls sharpened the mental and physical boundaries between Hindu and Muslim localities and mohallas. It also strengthened the anti-Congress, anti-Muslim Kasai rhetoric constructed by Hindu organisations. A series of communal conflicts began in the aftermath of this marriage which resulted in targeted attacks on areas dominated by Muslims and specifically by the Qureshi community. Mohalla Raqab Ganj, situated near Turkman Gate, Qasabpura, and other Muslim areas, were attacked constantly with the tacit as well as active support of police in 1952-1953.”

RSS mouthpiece Organiser, as quoted by the Milli Gazette in 2004, said in an editorial titled ‘Guilty Men’ in its June 2, 1952 edition:

“Notorious Sikandar Bakht was a commander in the Muslim League’s National Guards. As the favourite pet of Nawabzada Liaquat Ali Khan was an evil power in partition-time Delhi….We congratulate the Jan Sangh and the Mahasabha leaders and workers on their articulation of public agony. Graceful Delhi has responded to their hartal call for the second day.”

Bakht died in 2004, in office as governor of Kerala. He was one of only five BJP leaders – along with Vajpayee, L.K. Advani, Sushma Swaraj and Arun Jaitley – to be awarded the Padma Vibhushan, India’s second highest civilian award.

“In his condolence message the RSS Sarsanghchalak, K.S. Sudarshan described Sikander Bakht as an upright man of principles who had an affable temperament and endeared himself to all those who came in contact with him. Political untouchability was unknown to him and his earnest endeavour was to bring the Indian Muslim society into the national mainstream.”

If the Hindutva brigade could treat one of the BJP’s tallest poster boys in this manner, what chance has an ordinary Muslim young man of being able to safely marry a Hindu woman he loves, without facing violence from anti-‘love jihad’ vigilantes?

The right-wing leadership is slowly but steadily increasing the tempo against so-called ‘love jihad’. After triple talaq, the National Register of Citizens and the Citizenship (Amendment) Act, this is the latest dish on the communal platter. Like with the other three, it will be a formal, legal affair, in the form of a special law to deal with the “problem”.

Several BJP-run states have announced they will bring in a law of this kind. Madhya Pradesh was among the first to come out with a Bill – the Madhya Pradesh Dharm Swatantrey Bill, 2020. It has a provision of five years imprisonment for forced conversions for marriage. State home minister Narottam Mishra has a vivid picture of what love jihad is: “…which means a woman is forced or lured by a person of other religion for marriage and later she is tortured for conversion.”

The fact Mishra glossed over, and which underlines the political rather than legal urgency of the Bill, is that Madhya Pradesh already has a law against forced conversion: the MP Freedom of Religion Act. It requires that all converts produce a legal affidavit that they were not under any pressure, force or allurement to convert but are converting by their own will and desire, after evaluating the religion properly. It also has a provision for a two-year jail term. Why, then, a new law? What precisely is the Sangh parivar’s definition of love jihad?

Yes, there may be cases of forced conversions. India is a big country. But another law will hardly fix that problem. It needs a sensitive approach, and not communal polarisation – that too around election time. The exception cannot become the rule. Ask Sikandar Bakht.

India’s anti-conversion laws are statutes in force to curb religious conversions that are not voluntary. Such laws already exist in eight states, most of whom are under BJP rule today – Arunachal Pradesh, Odisha, Madhya Pradesh, Chhattisgarh, Gujarat, Himachal Pradesh, Jharkhand and Uttarakhand. Several other states are considering such laws.

The Constitution guarantees the freedom to profess, practice and propagate one’s religion under Article 25, which is “guaranteed in respect of not one religion only, but covers all religions alike, and it can be properly enjoyed by a person if he exercises his right in a manner commensurate with the like freedom of persons following the other religions”.

Supreme Court verdicts are clear: the propagation of a religion means persuasion without coercion. Conversion is voluntary. It is all about individual freedom, as guaranteed by the Constitution.

It seems like what the BJP is planning to do is criminalise conversion entirely, step by step, by assuming that all conversion is forced. For any Hindu woman wanting to convert to Islam, it could only be ‘love jihad’, the right-wing believes. To survive scrutiny, the law it brings will be strictly legal, but the drama will be in the way the law will be advertised – as a proactive measure to save Hindu woman.

The political perfidy at work behind the farce of love jihad – which has suddenly raised its head as the BJP turns its attention to heavily polarised assembly elections in Assam and West Bengal – is exposed by its own counter to love jihad: ghar wapsi. The latter is “reconversion of non-Hindus to Hinduism”, a prima donna among communal rituals for the Hindutva nationalists. Why is ghar wapsi not under the purview of the proposed anti-conversion laws? With no evidence, the party would like us to believe the conversion is always forced, but the reconversion never forced – and that, on its own could raise questions on any ‘ghar wapsi’ that takes place.

V.V.P. Sharma is a journalist, academic, blogger and commentator on politics, society and democracy.