Hardline Hindutva is one of the many weapons that BJP seeks to use as the Uttar Pradesh elections near. 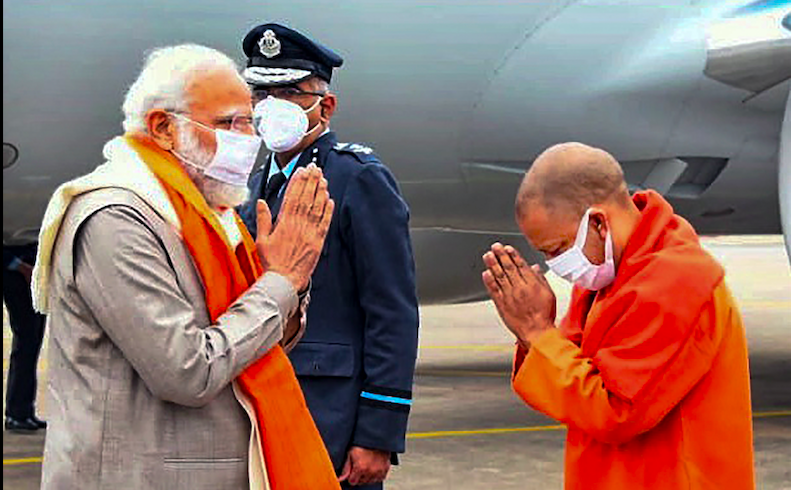 Prime Minister Narendra Modi being received by UP CM Yogi Adityanath on his arrival at athe airport in Kanpur, Tuesday, Dec. 28, 2021. Photo: PTI

The blistering display of hate, bigotry, incitement of violence and call for picking up weapons for a “safai abhiyan” or cleansing of minorities at the so-called ‘Dharam Sansad’ at Haridwar between December 17 and 19 was neither sudden nor isolated nor even astonishing for the watchers of the Rashtriya Swayamsevak Sangh and Bharatiya Janata Party’s operations.

There was a method to the madness.

The ‘religious parliament’ had the presence of Yati Narsinghanand, Prabodhananda Giri, Swami Sagar Sindhu Maharaj, Sadhvi Annapurna and many others in the garb of Hindu priests preaching what would serve the electoral interests of BJP.

These so-called Hindutva leaders with pompous honorifics like “maharaj” and “swami” have verifiable connections with the top brass of the ruling dispensation.

There are videos of Uttar Pradesh chief minister Adityanath, his Uttarakhand counterpart Pushkar Singh Dhami and many other BJP ministers, MPs and MLAs bowing in obeisance before these so-called swamis.

The Narendra Modi-led government and the BJP’s MPs have members abusing Muslims as “haramzada (bastards)” and venerating the assassin of Mahatma Gandhi, Nathuram Godse. Adityanath himself has mocked the Urdu word ‘abba jaan‘ to target Muslims.

BJP leaders were among those who attended the ‘Dharam Sansad’. 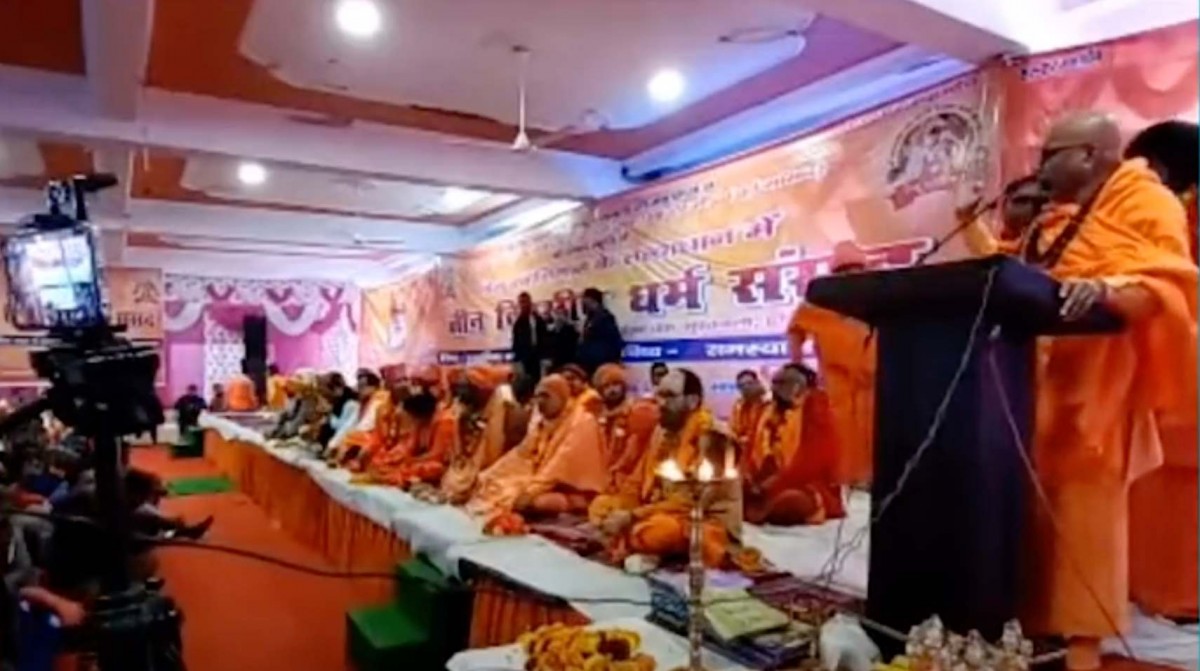 It’s not the case. Many of the caste Brahmins and Thakurs – constituting the core voter base of the BJP and enjoying political power and protection in what is referred to in common parlance on Uttar Pradesh’s streets as “Yogi-Modi raaj” – are full with glee at what the so-called religious leaders spewing venom at Muslims.

The continuance of Ajay Mishra ‘Teni’ as the Union Minister of State for home even after the Opposition demanding his sacking in the wake of the SIT report describing the mowing down of four farmers at Lakhimpur Kheri as a “pre-planned” conspiracy is an apt example of how a Brahmin can enjoy power, pelf and protection despite staying under the scanner of the investigating agencies and the judiciary.

The Uttarakhand government has belatedly and reluctantly lodged FIR against the Haridwar episode. It’s just tokenism. The leaders of the Dharam Sansad are undeterred. They have announced plans to organise another such event at Vrindavan in January 2022. It will be hardly surprising if they organise it and spew more venom and vitriol.

In fact, the Sansad at Haridwar was just the beginning of a plan which the RSS-BJP will execute to polarise the society and enable Aditynanath to tide over the anti-incumbency caused by his monumental failures on the indices of health, education and livelihood.

Bodies of the deceased buried in the sand near the banks of Ganga river, allegedly due to shortage of wood for cremation, during the second wave of coronavirus, at Shringverpur Ghat in Prayagraj, May 15, 2021. Photo: PTI

Adityanath is faced with the challenge to obliterate the memory of the rivers and their banks from Allahabad (now Prayagraj) to Ballia turning into the bed of floating corpses in April to June 2021 from the mind of the people who now face the threat of the Omicron variant. He has to tide over the visible unrest among the voters against an unprecedented rise in the prices of petrol, diesel, vegetables and other essential commodities.

He has to tide over all-time high unemployment and massive loss of livelihood opportunities that have enraged youths.

The Wire as recently as on December 14 had reported how the UP deputy CM Keshav Prasad Maurya and BJP MP from Salempur, Ravindra Kushwaha demanded the repeal of the Places of Worship (Special Provision) Act 1991 and how the Hindu Mahasabha announced to hold aarti at Shahi Eidgah mosque at Mathura.

Needless to say that the deputy CM, the party MP and the Hindu Mahasabha – which describes itself as separate from the RSS but works effectively as the RSS’s sleeper cell – were acting with the sole purpose to polarise the Hindus and Muslims. The Prime Minister, Narendra Modi topped it up by playing up the “Aurangzeb-Shivaji binary” at the Kashi Vishwanath corridor project on December 13.

Has the SP or Akhilesh Yadav ever said that they would stop the construction of the Ram temple? But the BJP’s idea is to create animosity in the mind of the majority community against the minorities, who are apparently uniting behind the SP.

Most electoral surveys have given an edge to Adityanath over Akhilesh Yadav, but they have also shown a rising trend in Akhilesh’s graph and dwindling of the same in Adityanath’s one.

The pollsters also see Akhilesh emerging as the main contender against the BJP and marching ahead to make it a bipolar election. Akhilesh has aligned with some local players with clout among their caste groups in a bid to avoid a split in anti-BJP votes.

Moreover, the withdrawal of the three contentious farm laws has apparently dented the PM’s ‘omnipotent’ image but his party doesn’t expect electoral advantage from the decision. The western UP farmers – Hindus and Muslims – continue to be angry with the government on the issues of sugarcane dues and rise in the prices of diesel and petrol.

Coupled with these factors, the steady rise in Akhilesh Yadav’s graph as indicated in the surveys and huge turnout of people at his vijay yatras (rallies) across the state have apparently goaded the RSS-BJP strategists to play the hard Hindutva card with more ferocity and venom.

The RSS-BJP has the reason to play the politics of polarisation, particularly in Uttar Pradesh. The hard Hindutva coupled the micro-management of the Dalits and some Economically Backward Classes had enabled it to tide over the enormously adverse impact of the demonetisation and notch up victory in 2017 assembly elections.

The BJP appears to have tried to confuse the Dalit voters this time around too. UP’s political circles are agog with speculation that saffron strategists have used the Enforcement Directorate and other agencies to keep the BSP supremo, Mayawati shackled.

The local media reports are doing the rounds that Mayawati, an otherwise spirited campaigner in the past, is lying low this time.

Also read: The UP Assembly Polls Are Almost Here – But Where Is BSP?

But the gangrape and death of a Dalit teenager at Hathras has turned out to be a big issue with Akhilesh taking it up and speaking on it at his rallies. Besides, he has harped exclusively on the issues of unemployment, loss of livelihood opportunities, price rise and non-performance of the Adityanath government.

At this stage it is still hard to say if the BJP or the Samajwadi Party will eventually win but what is clear as of now is that the Akhilesh-led SP is in the race gearing up to give a tough fight to the Modi-Yogi raj.

It is precisely for this reason the RSS-BJP has unleashed all the weapons that could polarise society to its electoral advantage. The Dharam Sansad is one of its many such weapons.