BJP Is Using Communal Violence to Torpedo Emerging Alliances in Bihar, UP

Nitish Kumar is now a helpless junior ally of Hindutva leaders in the state. 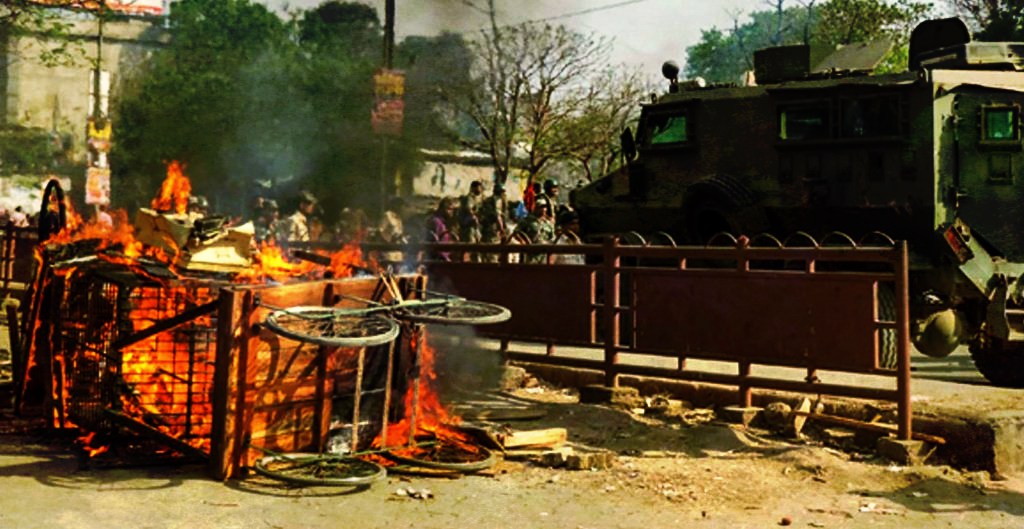 Bihar, and many parts of West Bengal close to Bihar, have been engulfed in a spate of communal tensions and violence. Religious processions (Ram Navami and Chaiti Durga; in late January it was Saraswati Puja) carrying illegal weapons, entering into Muslim mohallas, shouting incendiary slogans, ransacking mosques and madrasas (at Rosera in Samastipur) are becoming the order of the day. So much so that Nitish Kumar is not able to prevent it even in Silao (Nalanda), the chief minister’s home district. The opposition Rashtriya Janata Dal, despite its huge cadre base, is also hardly doing anything proactive to confront the menace.

Nitish has a very long political affiliation with the hate mongers, and despite the Godhra train carnage and subsequent massacres of 2002 in Gujarat, Nitish, the then minister for railways, had chosen to continue in alliance with the ruling BJP. It should therefore not surprise anyone when Nitish is choosing to fail in reining in the Hindutva hoodlums raging across Bihar. But it does surprise many. Why?

First, because Nitish governed Bihar between 2005 and 2013 in alliance with the BJP when the BJP was not in power at the Centre. Then, he was the dominant ally, keeping the Hindutva agenda at bay with various other exercises of social coalitions – Ati Pichhra, Mahadalit, Pasmanda. Second, Indian electorates arguably have strange ways. Are they too generous in giving the benefit of doubt to their leaders – political as well as religious?

Nitish pulled out of the mahagathbandhan in July 2017 for reasons best known to himself. Speculation suggests that Nitish realigned with the BJP to avoid the discomfiture he could have faced regarding the Srijan scam case, and other such allegations of corruption and crime, pending or future, against him. Some also say that Nitish was not comfortable with the ever-growing demands of the Yadavas and that by the next elections, Tejaswi (Lalu Prasad’s son) could have tried to replace him, given the fact that his core support-base, Yadavas (12%), are numerically far ahead of the Kurmis (4%), to which Nitish belongs; and given the fact that Muslims (17%) have always trusted Lalu, rather than Nitish, makes the RJD’s base far stronger.

In addition, if an NDTV report is to be believed, Lalu and his Man Friday Prem Gupta approached finance minister Arun Jaitley, asking for some reprieve in corruption investigations and saying that as a quid pro quo, Lalu will kick out Nitish within 24 hours. As this leaked to Nitish, he brought an end to Bihar’s mahagathbandhan.

Be that as it may, it did not require great intelligence to foresee that Nitish’s realignment with the BJP in 2017 would not make him a dominant partner within the National Democratic Alliance (NDA), unlike what he really had been during 2005-2013. His credibility and trustworthiness among the electorates, as well as among the allies, on both sides of the divide, have dipped miserably low because of opportunistic alliance-hopping.

In this situation, it was known that fierce and fast-growing saffron outfits would outsmart and marginalise him. The spurt in communal clashes in Bihar after June 2013 (when Nitish pulled out of the NDA) and its further resurgence since July 2017, when Nitish re-joined the NDA after the BJP formed government in Uttar Pradesh, despite demonetisation woes and mushrooming proliferation of various saffron outfits (including the Hindu Yuva Vahini, spreading from its headquarters in Gorakhpur in UP to the adjacent Saran in Bihar) is predictable lines, at least for Bihar watchers.

Precisely because of this, Nitish is now a helpless junior ally of Hindutva leaders. He cannot think of reining in the saffron hoodlums raging, marauding and killing in the mohallas. He cannot even do what Mamata Banerjee is doing; her police is seen directly confronting the marauders in Purulia, Asansol-Raniganj, Kakinada and other parts of West Bengal. Asansol-Raniganj, has got a sizeable Hindi-speaking population and is represented by Babul Supriyo, a minister in the Union cabinet of Narendra Modi.

Senior bureaucrats say that Nitish’s higher bureaucracy is cozying up with his dominant partner for more remunerative central assignments. They are therefore no longer cooperating with him in maintaining law and order and preventing armed processions shouting provocative slogans. R.C.P Sinha, Nitish’s link with the bureaucracy, is said to have become ineffective now. True, he did succeed in penalising the rioters of the 1989-90 Bhagalpur massacre. But now, even if he does wish to rein in certain groups (one may have genuine doubts on whether he really wishes to), he can no longer do anything. His ally, now a dominant one, cannot allow him to do so. 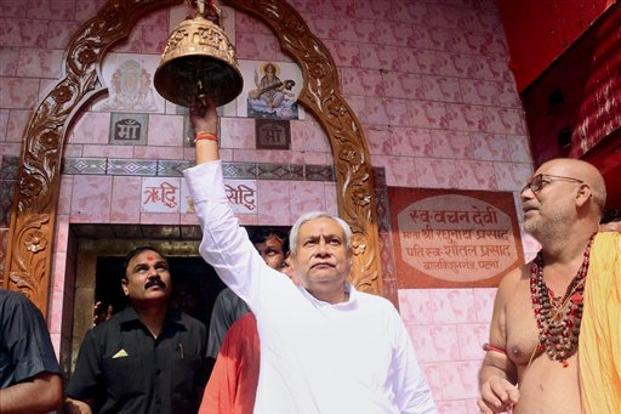 Why? Because, in power at the Centre, they have failed miserably in delivering lots of promises they had made in 2014. The banking scandals, accentuating farm distress, atrocities against Dalits, marginalisation of the regional allies (mostly backward groups) and rising unemployment all have to be covered up through communal polarisation. The Hindutva card – an electoral saviour for the incumbent regime – is being played out in utter desperation.

It appears that the victory of the Samajwadi Party-Bahujan Samaj Party alliance in the by-elections to two Lok Sabha seats in UP – Gorakhpur and Phulpur – has created many anxieties in the saffron camp. This is particularly because the bastion of the UP chief minister has been wrested away by a subaltern community of fishermen (Nishads/Mallahs). This specific community has been organising and asserting itself politically in parts of eastern UP and northern Bihar. The Mallahs (Hindu fishermen, including similar sub-castes like Gangotas and Kevats – the boatmen and also those earning their livelihoods from river water) are now emerging as the dominant castes in these parts. The rise of Mallah in the Muzaffarpur (Bihar) Lok Sabha seat since the 1990s almost sealed the prospect of a Bhumihar getting elected from there. The Bhagalpur (Bihar) Lok Sabha seat is represented by an RJD leader who belongs to the Gangota community. A similar fear of Rajputs is emerging in Gorakhpur. The Nishads have also staked their claims on Adityanath’s Gorakhnath Math.

Both Bihar and UP had long spells of ‘backward’ caste and Dalit rule since 1989-90, against which the spell of Hindutva mostly crashed and burned, despite mobilisations in the name of Ram janmabhoomi in the 1980s and early 1990s. Thus, the ideological bulwark of ‘social justice’ kept Hindutva on hold. Had these two provinces been a Congress stronghold after 1989-90, these provinces too could possibly have fallen to Hindutva, just as they did in Madhya Pradesh, Chhattisgarh, Jharkhand and also in Rajasthan to a large extent, besides Maharashtra and Gujarat, where Congress rule did not offer any ideological counterpoint to Hindutva. Additionally, Madhya Pradesh and Maharashtra have relatively smaller proportions of the Muslim population. These provinces, arguably, offer relatively less incentives for Hindutva mobilisation, as years of such activities in these areas seem to have reached saturation by now.

Second, in Bihar and UP, Muslims are in a sizeable number and have a corresponding public profile. It therefore offers fertile ground for the polarising agenda, especially now, when the supremos of backward and Dalit political parties became single-caste monopolies, with a meteoric rise in the political and economic fortunes of the supremos and their kins.

As against this, the ascendant Hindutva is offering a political career “open to talent”. For aspirational youth, communal activities are exercises in political CV building. Jobless youth are therefore joining in for money, piece of the action and political opportunities. Under friendly regimes, there is a renewed push to consolidate and expand to new grounds. This further explains why there is a sudden spurt in communal tensions and violence in Bihar and UP.

One may see a pattern in the recent communal aggression in Bihar.

The geography of the violence suggests that those places are more prone to such violence where either the BJP’s allies are likely to stake their claims for Lok Sabha seats in 2019, or the incumbent BJP parliamentarians are feeling insecure due to discontent among certain caste groups:

Earlier, in January, violence broke out in:

As said earlier, the victory of the SP-BSP alliance in the by-polls of Gorakhpur and Phulpur Lok Sabha seats seems to have added to the desperation of the BJP. With more intensified communal polarisation, the BJP might be trying to torpedo the emerging alliances of backwards and Dalits. That could explain the renewed spurt and virulence in communal skirmishes since late March.

The BJP’s rising desperation has also to do with the fact that the smaller allies representing specific subordinate castes in parts of provinces (for instance, Upendra Kushwaha’s RLSP, Ramvilas Paswan’s LJP and other such allies of the BJP in UP) have not been able to strengthen their base, despite being in alliance with the ruling BJP. Immediately after the by-poll results, some of the allies, including Ramvilas Paswan, talked their discomfiture with the BJP. All this dissent is being sought to be made ineffective by consolidating the Hindu population through intensified communal polarisation.

In this scenario, it seems almost inevitable that Nitish will increasingly be getting cornered into political oblivion. Even if he would merge with the BJP, he may not remain on top any longer. Meanwhile, Bihar keeps sliding on all fronts, for which Nitish cannot deny a considerable share of the blame.

Opposition needs to be more proactive

Even the opposition is not mobilising its cadres to confront the hoodlums head on. The RJD cadres do not seem to pursue a politics of direct, on-the-street intervention, nor is it resorting to judicial battles, in each case of rioting, to rein in the Hindutva hoodlums. Secondly, Tejaswi does not seem to be sincere about propping up leaders from non-Yadav OBCs and Dalits, who had deserted the RJD primarily because of Yadav hegemony.

Other secularists and liberals are, for instance, not able to ask even the Muslim clergy not to bring out huge processions in several towns on a misogynist issue. They erred in 1986, when they upturned the justice dispensed to Shah Bano through a parliamentary legislation, giving rise to a majoritarian reaction. They are repeating that mistake again. Yet many of the liberal-Left intelligentsia and “Muslim-friendly” regional formations are hardly speaking out against them sternly, giving some sort of credence to the Hindutva canard of Muslim appeasement. This is what has been corroding their credibility during these many decades, giving rise to the menace of majoritarianism. The point is simple. Caste- and gender-based regressive attitudes, conservatism and communalism have got a cause-effect relationship.

The need of the hour is to frankly accept past mistakes in order to regain people’s trust. Only then will secular progressive forces be able to convince common voters, while exposing the failures of the incumbent regime on all fronts and revealing why they have resorted to poisoning society with fear and hatred. Mere opportunistic stitching of coalitions will not convince people that such an arrangement will really be able to sustain itself and deliver on issues such as the economy and employment.

Mohammad Sajjad is a professor with the Centre of Advanced Study in History, Aligarh Muslim University, and the author of Muslim Politics in Bihar: Changing Contours.