As per court records, there are 32 accused in the case and many of them have been invited to the ceremony or consulted about it. 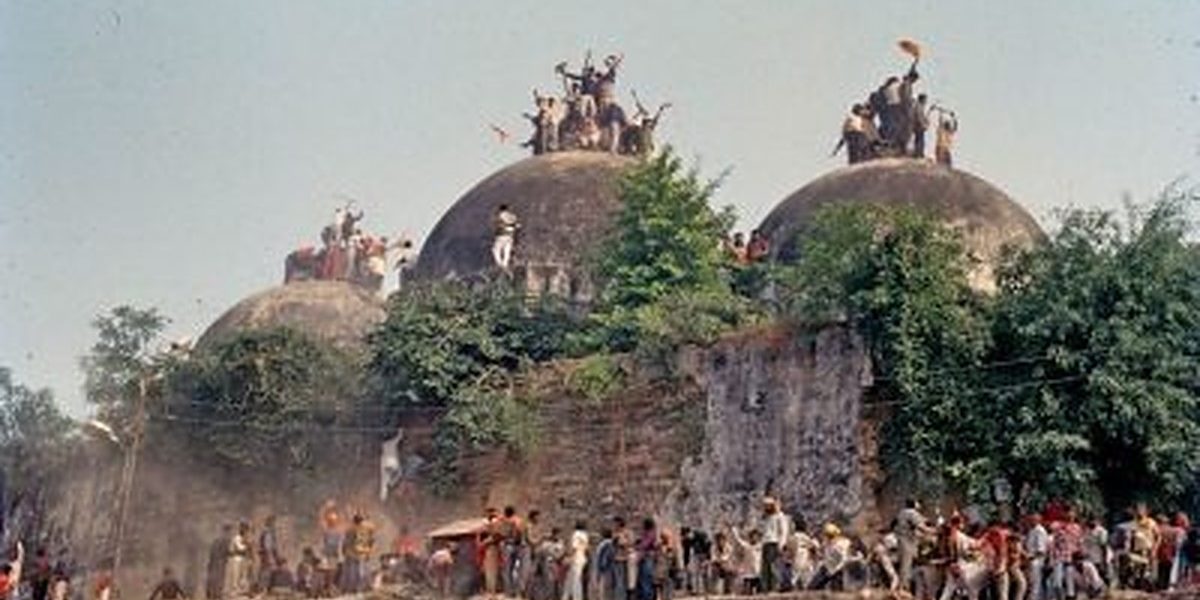 New Delhi: In a recent interview, Kalyan Singh, a senior leader of the Bharatiya Janata Party (BJP) and chief minister of Uttar Pradesh when the Babri Masjid was demolished, was asked by a Hindustan Times journalist if he had done his duty in 1992 and done enough to protect the mosque.

Singh’s answer was, “I will tell you something. That day (December 6) amid the build-up, I got a call from the district magistrate of Ayodhya saying that nearly 3.5 lakh kar sevaks had assembled. I was told that central forces were on the way to the temple town but their movement was halted by kar sevaks outside Saket college. I was asked whether to order firing (on kar sevaks) or not. I denied permission in writing and said in my order, which is still there on the files, that firing would lead to the loss of many lives, chaos and law and order issues across the country.”

Babri Masjid ‘demolition eventually paved the way for the temple’

Upon being asked another question on his decision, Singh told the reporter, “I am proud of my decision as today I can proudly say that I might have lost my government but saved kar sewaks. Now, in hindsight, I feel that subsequent demolition eventually paved the way for the temple.”

Also read: When Even the Supreme Court Let Down the Nation

Notably, it was the Kalyan Singh state government which in an affidavit, filed on November 27, 1992, before the Supreme Court of India had assured the court that his government was “fully competent to prevent the violation of the court’s order and [that] the assistance of force offered by the Central government is not necessary in the present circumstances.” 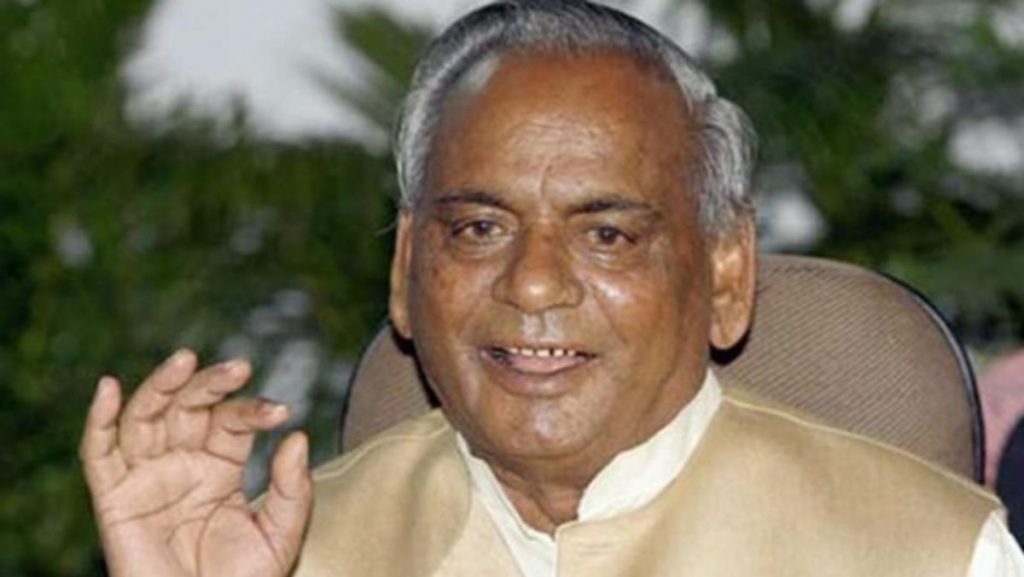 According to senior journalist and writer Manoj Mitta, Singh’s state government, reiterating its commitment to “safeguard and protect” the mosque, had said that it “has been frequently reviewing security arrangements of the disputed structure and has been taking all necessary steps to ensure its safety”.

It was on the basis of this affidavit of the Kalyan Singh government that the apex court allowed a “symbolic kar seva” to be held on the fateful day, which led to the demolition of the Babri Masjid. As per the Supreme Court, the act of demolition of the mosque was not just illegal but also a “breach of the order of status quo and an assurance given to this Court.”

Not only that, in April 2017, the Supreme Court, while ordering a time-bound trial, referred to the demolition of Babri Masjid as a crime which “shook the secular fabric of India”. “In the present case, crimes which shake the secular fabric of the constitution of India have allegedly been committed almost 25 years ago,” read the order passed by a bench of Justices P.C. Ghose and R.F. Nariman.

The Supreme Court had directed the sessions court in Lucknow to hold daily hearings and deliver a judgment within two years.

More than three years after the court ruling mandating a time-bound trial and 28 years after the demolition of the mosque, the trial is yet to conclude. Experts believe that it seems all the more impossible now that the guilty will ever be punished as it is not clear as to when the court is going to deliver its verdict in this matter.

Interestingly, the members of the BJP and Sangh Parivar, who often took pride in saying that they have made the demolition possible are now claiming that they had nothing to do with it. Kalyan Singh, for one, said, “I was falsely implicated, I am innocent.”

What is even more important to note is that some of the people accused of the criminal act, which “shook the secular fabric of India” are going to – in person or online – be a part of the bhoomi pujan ceremony, scheduled on Wednesday and to be attended by Prime Minister Narendra Modi. 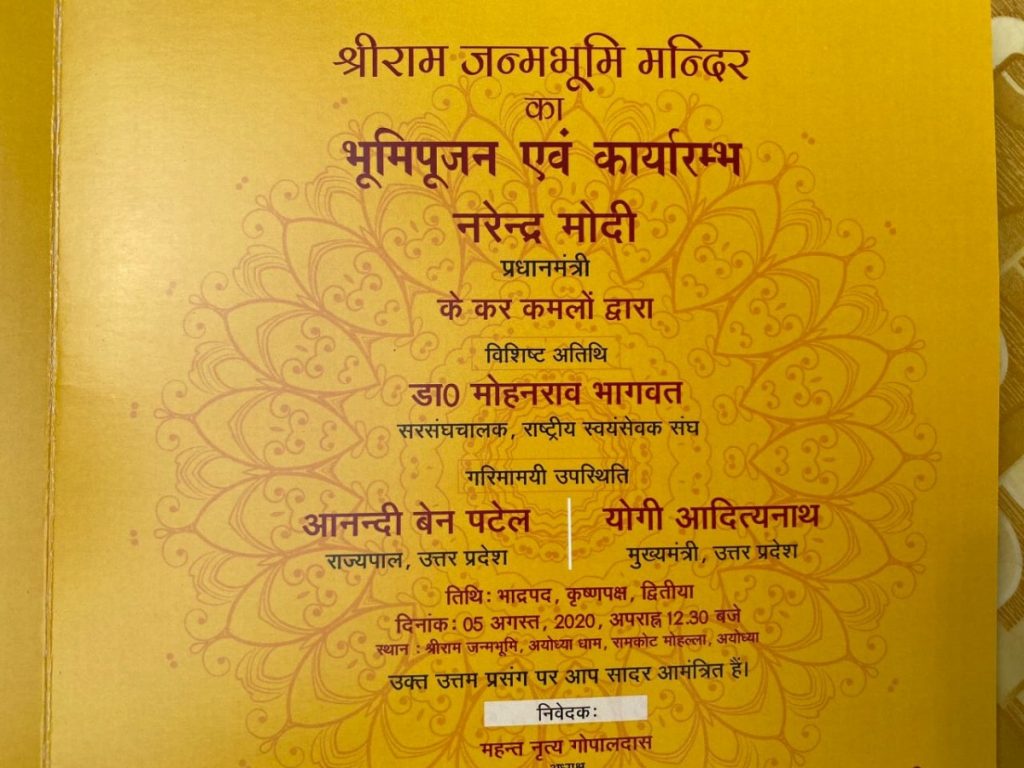 The invitation sent out for the August 5 bhoomi pujan in Ayodhya. Photo: Special arrangement

Advani and Joshi ‘consulted’ for ceremony

It soon became clear that the two were not just invited but also consulted on who should be invited for the ceremony. While amidst the pandemic, when even courts are functioning virtually, there is less importance attached to physical presence at events, the very fact that they were made a part of this process is important.

It needs to recalled that both Advani and Joshi played a key role in stirring up sentiment for a Ram temple and the demolition of the Babri mosque. According to the CBI chargesheet, Advani was also present at a secret meeting on December 5, 1992, at Vinay Katiyar’s home where the final decision to demolish the mosque was taken.

Moreover, as per a police officer’s deposition before the court hearing the demolition case, “On December 6, 1992 Advani made a spirited speech from Ram Katha Kunj Manch, barely 150-200 metres from the disputed site, which charged the people. He repeatedly said that the temple would be constructed at the same site.”

The chargesheet also noted, “According to the investigation, Murli Manohar Joshi had said at Mathura on December 1, 1992, on his way to Ayodhya that no force can stop construction of Ram temple and he was encouraging the kar sevaks from the manch on December 6, 1992, for the demolition of the disputed structure and was shouting provocative slogans.”

In fact, there is a photo in which Joshi can be seen rejoicing with Uma Bharti and others while the mosque demolition was in progress at Ayodhya on December 6, 1992.

Like Advani and Joshi, Uma Bharti is also accused in the case and she has recently said in a television interview, “I was called by the court for my statement and I have told the court what was true. It does not matter to me what the judgement will be. If I am sent to the gallows, I will be blessed. The place where I was born will be happy.”

Both the Liberhan commission and the CBI chargesheet indicates her role in provoking the kar sevaks to demolish the mosque. According to the chargesheet, some of the slogans that Bharti raised were, “Masjid girao, mandir banao, Babar ki aulad ko Pakistan bhagao” (‘Demolish the mosque, construct the temple, sends Babar’s progeny to Pakistan’).

Citing the pandemic as the reason for her non-participation in the ceremony, Bharti on Monday said she would not attend the ceremony. Instead, she would be on the banks of the Saryu river and visit the site and offer prayers to ‘Ram Lalla’ after the event had concluded. “I will visit the site and take darshan of ‘Ram Lalla’ after the Prime Minister and others leave,” she tweeted on Monday.

Meanwhile, Kalyan Singh who initially had announced that he will reach Ayodhya a day before the bhoomi pujan (on August 4) and attend the ceremony the next day, will not be attending the ceremony either. As per media reports, the veteran BJP leader has home quarantined himself after a journalist, who participated in his press conference recently, tested positive for coronavirus.