'These are all lungi-clad terrorists. They have been chucked out by Bangladesh and have come to West Bengal.' 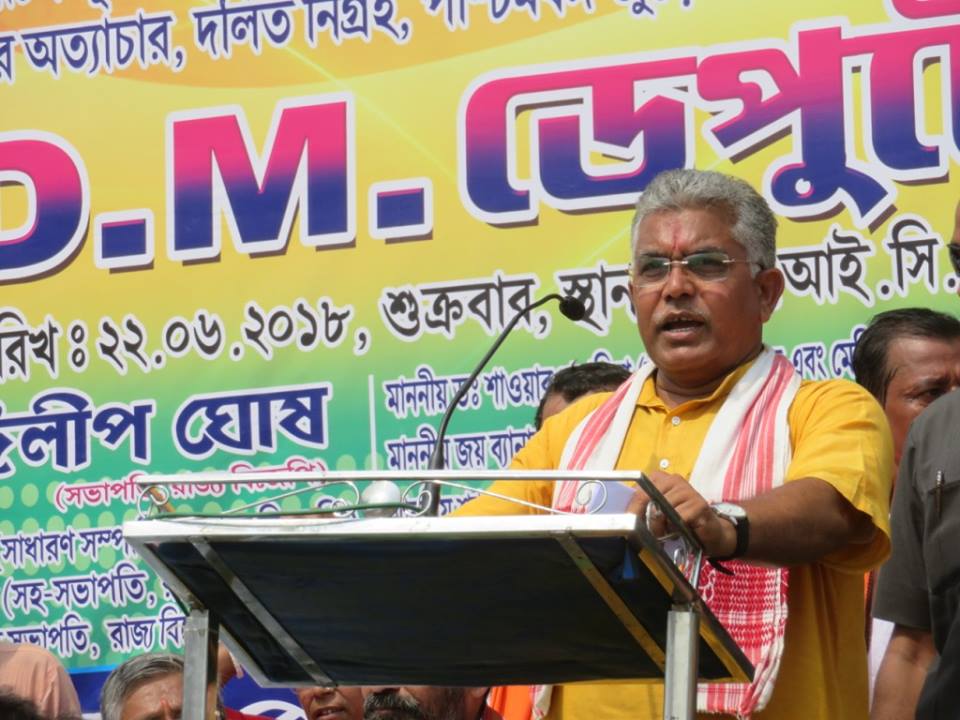 New Delhi: Two days after prime minister Narendra Modi said those who were protesting against the Citizenship (Amendment) Act could be “identified by their clothes,” the BJP’s West Bengal president and Medinipur MP Dilip Ghosh said lungi-clad terrorists had made their way to Bengal from Bangladesh.

Ghosh was responding to Bengal chief minister Mamata Banerjee, who on day two of her three-day anti-Citizenship (Amendment) Act and anti-National Register of Citizens rally, took the mic to condemn Modi’s ‘clothes’ remark.

At a rally in Dumka in Jharkhand, Modi had said, “The Congress and its allies are making a noise, creating a storm. And if that doesn’t work, they are spreading a fire… From the visuals on TV, those setting the fire can be identified by their clothes.”

Mamata asked if clothing was indeed a marker of who a person is. “Can you recognise me by this?” she asked from the dais, holding up her white saree. The chief minister then went on to pick out MPs, MLAs, and Trinamool Congress supporters from the dais and asked those gathered if they thought what each of them were wearing were “good” clothes or “bad” clothes.

On the same day as Mamata’s rally through south Kolkata, BJP workers took out rallies in parts of the state in support of the amended Citizenship Act. According to reports, a march led by BJP leader Raju Banerjee in Howrah district was stopped midway by police personnel, who put up barricades across the road.

Early in the evening, Dilip Ghosh sat at a press conference where he criticised Mamata for her stance against the Act and the NRC.

When asked by reporters to respond to Mamata’s ‘clothes’ retort, Ghosh said, “I am sure Mamata knows who it is that is causing the trouble. These are all lungi-clad terrorists. They have been chucked out by Bangladesh and have come to West Bengal. Mamata knows it all. She just doesn’t want to accept the truth.”

The lungi is a piece of cloth worn by men across southeast India. It is, however, clear what Ghosh meant by “lungi terrorists”. The clothing was used, this time, to identify the men of Bangladesh who Ghosh indicated were Muslims, and therefore terrorists.

Ghosh’s comment was in line with the BJP’s stance which has it that most of the anti-CAA protests in Bengal are being done by Muslims from Bangladesh.

He recently tweeted as much.

See the demolition by Bangladeshi Infiltrators. Picture depicts the current status of Dhulianganga Rly Station in Murshidabad District. Several stations around Paschim Banga are being vandalised and burning.
Think for yourselves would any Bharatiya do this to their Motherland? pic.twitter.com/ffEuKJQMpL