Madhav Godbole, the home secretary when the mosque was demolished, and Justice M.S. Liberhan, who presided over the commission of inquiry into the demolition, expressed their shock at the court’s decision. 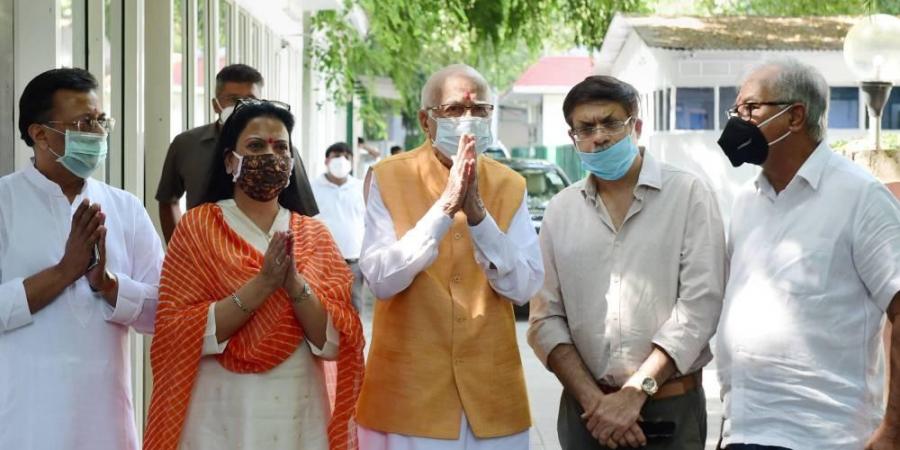 Senior BJP leader LK Advani, one of the accused in Babri mosque demolition case, along with his daughter Pratibha Advani and son Jayant Advani (2nd right) after the verdict. Photo: PTI

New Delhi: The special Central Bureau of Investigation court which acquitted all 32 accused persons, including Bharatiya Janata Party leaders L.K.Advani, Murli Manohar Joshi, Kalyan Singh and Uma Bharati, in the case of criminal conspiracy to raze the Babri Masjid down has evoked varied responses on Wednesday.

BJP leaders naturally welcomed the judgement, while once again pledging their allegiance to the Advani-led Ram Janmabhoomi movement that eventually became the reason for the demolition of the mosque. Opposition parties criticised the CBI for having allegedly diluted incriminating evidence against the accused in its chargesheet, while terming the verdict as yet another blow to the secular fabric of India.

At the same time, Madhav Godbole, the home secretary when the mosque was demolished, and Justice M.S. Liberhan, who presided over the commission of inquiry into the demolition, expressed their shock at the court’s decision. They thought that the verdict is completely contrary to the evidence that was gathered over the last two decades.

What did the BJP leaders say?

One of the accused, senior BJP leader Advani, while welcoming the verdict, said that it “vindicated” his personal and BJP’s “belief and commitment towards the Ram Janmabhoomi movement”. He added that he feels “blessed” that the CBI court’s verdict came on the heels of last year’s Supreme Court judgement which paved the way for his “long cherished dream” of seeing a grand Ram temple in Ayodhya.

“Along with millions of my countrymen, I now look forward to the completion of the beautiful Shri Ram Mandir at Ayodhya. May Shri Ram keep us blessed always,” the 92-year-old leader said.

Joshi, who was also one of the accused persons, told The Print, ““This is a victory of every Indian. Ram is not confined to Hindus only and Ayodhya belongs to everyone.”

Speaking to a television channel, he said that the verdict is proof that the events at Ayodhya on December 6, 1992 was not a conspiracy, and that it happened suddenly. “Our own movement for the Ram Mandir under the leadership of Advaniji was only meant to create a consciousness and an environment to build a Ram temple,” he said, adding that the nation should now prepare itself to see a Ram temple at Ayodhya.

Vinay Katiyar, who was also one of the accused and was the serving MP from Faizabad at the time of demolition said, “We are accepting the decision with grace.”

“I welcome the decision of the special court of Lucknow not to join any conspiracy of 32 people including Shri LK Advani, Shri Kalyan Singh, Dr Murali Manohar Joshi, Umaji in the Babri Masjid demolition case. The verdict has proved that justice prevailed even if it is late,” Union defence minister Rajnath Singh said on Twitter.

“The people involved in the conspiracy should apologise to the people of the country,” he demanded.

The Rashtriya Swayamsevak Sangh hailed the judgement as the flagbearer of national unity. “After this decision, all sections of the society should come together in unity and harmony and work successfully to face the challenges before the country, and work towards the progress of this country,” RSS general secretary Suresh ‘Bhaiyyaji’ Joshi tweeted.

Interestingly, Shiv Sena, who is currently a part of the Maharashtra government along with the Congress and the Nationalist Congress Party, also supported the verdict. Both chief minister Uddhav Thackeray and party spokesperson Sanjay Raut said that the CBI court’s verdict was welcome. “We should not forget the incident as grand Ram Mandir is now being built. If the Babri structure had not come down, we would not have seen the construction of the Ram temple,” said Raut.

The Left parties took the lead in lashing out at the verdict, while Congress held a press briefing to say that the CBI court’s verdict ran counter to last year’s apex court judgement that had categorically said that the demolition was illegal.

Terming the verdict as “a travesty of justice”, the polit bureau of the Communist Party of India (Marxist) said, “It took 28 long years for this verdict but not justice to be delivered.  All the top leaders of the BJP-VHP-RSS who were present at the scene guiding the criminal act have been found to be innocent of the charge of conspiracy to demolish the mosque.”

“The Supreme Court in its Ayodhya judgment on November 8, last year had called the demolition an egregious violation of the law. Now, the Lucknow court has found the main perpetrators of this crime not guilty,” it said, adding that the judgement would be a “blemish” to India’s secular-democratic fabric and constitutional rule.

It demanded that the CBI must immediately appeal against this judgment.

Also read: Babri Masjid: The Timeline of a Demolition

“This verdict, coming on top of the Supreme Court verdict handing over the mosque site to the Ram Temple Trust, is the final nail in the coffin of justice for victims of hate crimes in India. These verdicts are an incentive for perpetrators of hate crimes, assuring them that they can enjoy the political and material fruits of such crimes with total impunity,” he said.

He said that all the accused had openly built up a frenzied environment to build a Ram Temple at the site of the mosque ahead of the demolition. “This demand had the demolition embedded into its structure, and the Rath Yatra was accompanied by Hindu supremacist violence against Muslims which took many Muslim lives,” he said, adding that the CBI court has actually “endorsed” the BJP’s position that the demolition was spontaneous.

He further said while “Advani stood and watched as the supporters amassed by him used sophisticated tools to bring down the mosque”, Uma Bharti and Joshi were “caught on camera celebrating” and later boasting of their role in the demolition.

“Sadhvi Rithambara’s poisonous speeches calling for the massacre of Muslims and demolition of this and other mosques, are a matter of public record. Yet she stands acquitted,” Bhattacharya said.

Responding to the verdict, Congress’s chief spokesperson Randeep Surjewala called the CBI court judgement as one which is “founded in error”.

The verdict, he said, “runs counter to the Supreme Court judgement as also the constitutional spirit. The SC clearly held the demolition illegal and an “egregious violation of the rule of law”.

“The entire country witnessed a deep rooted political conspiracy by BJP-RSS and its leaders to destroy the country’s communal amity and brotherhood to usurp power, he said. He added that the then BJP state government in Uttar Pradesh was “a co-conspirator, so much so that the Supreme Court was misled by filing a wrong affidavit on oath by the then UP government”.

He demanded that both the state and central governments should appeal against the CBI court’s decision without “any partiality and premeditated prejudice”.

Speaking to Outlook, Justice Liberhan said that the verdict was an “utter farce”. The retired judge, who headed the commission of inquiry and took 17 years to submit his report to the Union government, said that there was “ample evidence available to prove complicity and culpability of these leaders” and to “demonstrate conclusively the pre-planned conspiracy behind the destruction of the disputed structure (the Babri Masjid)”.

He said that the court’s verdict is “completely contrary to the conclusions of the commission”.

The home secretary at the time of demolition, Madhav Godbole, too said that he was “aghast” at the CBI court’s judgement. Speaking to Huffington Post, he said, “Quite frankly, I am aghast with this verdict because, firstly, a huge mosque of this size coming down within a period of five hours without any planning or without any preparation on the part of anybody is impossible to believe.”

“Secondly the fact that, after 28 years this decision has come, is a commentary on our judicial system, criminal law system,” he added.

Commenting on whether the Centre and the state would appeal against the verdict or not, he said given both the dispensations are currently led by the BJP, the chances of appeal are highly unlikely. “Obviously, one would have normally expected that an appeal will be filed against this judgment in the high court or in the Supreme Court but looking at the power dispensation which is there both in the state and the centre, it is unlikely that any appeal will be filed,” he said.