What hurts even more is the denial of what happened to India on November 9, and the lie that this was a “balanced judgment”. 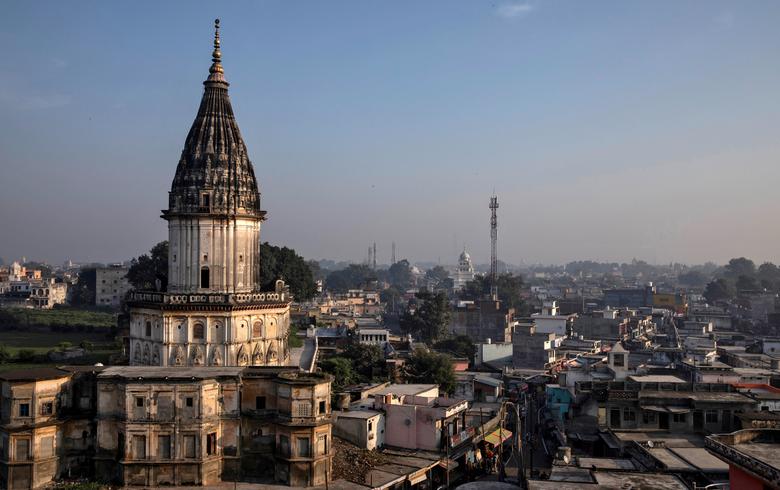 “If the judgement had gone in favour of ‘the Muslim’ party, our blood would have flowed on the streets! Right-wing hordes would have descended on the land. No Muslim would have been allowed to take possession. That is the simple truth. Why is it that no one has the courage to just say that?” These angry words burst from a young Muslim student of Delhi University. He said it as only the young can – simply and directly, shorn of legal sophistry or academic qualifiers.

He then proceeded to speak, and I knew he would just burst if he didn’t, about how he felt, how humiliated, how small, how angry, how helpless. “Is this what Muslims are reduced to? You take our land, you destroy a historic mosque, burn our homes, lead riots against us, and then you get rewarded. Muslims have to fight this. We have to lead this fight. Let secular Hindus join us…” Lots of young educated Muslims I’ve spoken to in the last few days are saying some version of this.

They have ideas too about how they want to respond to the five acres of land being offered in lieu of justice. Some want to reject it outright. Others speak of building a hospital or a school. Several young people imagine creating in Ayodhya a memorial to the riot victims of 1992-93. Others want a memorial to all victims of the spree of lynching that directly preceded the judgment. Why not? A memorial to Akhlaq, Pehlu, Junaid and Tabrez. A memorial to enduring injustice. No one, not one single person I’ve spoken to, believes that what a young woman student calls the ‘mosque-monument-of-humiliation’ can ever be built on that land.

What has caused their seething is not just the patent injustice of the verdict, but the enforced silence about it.

The narrative of ‘peace at last’, ‘just resolution’, ‘let us move on’, ‘balanced judgment’ has been aggressively pushed. Under the garb of ‘not vitiating communal harmony’ the government has sought to intimidate voices less than welcoming of the judgment. How on earth can the despair of millions of Indians not be allowed expression on social media?

A tale of peace so violently crafted is lies. It is a lie to say that most people welcome this judgment. It is illogical that any judgment on what everyone calls one of the most divisive legal battles in the history of India would be received with a synchrony of applause. Many Indians, many Muslims – and please remember their overall number stands at some 200 million – are feeling wounded. Can they not even show the depth of their cut, let alone seek balm, even in words?

Denial of pain leads to trauma. What these young people are asking for is not even close to justice. It is mere acknowledgement. They are asking others to bear witness. Healing can only come from listening to them. Speaking their truth, as they experience it, through their eyes, memories and hearts. Not from shutting them down, gagging their posts, and wiping out their voices from all public dialogue and expression.

Asaduddin Owaisi is filling this gap for many young Muslims. He is saying, and has been for a long time, what no other politician is being able to say. And it is not as if he speaks some specially coded Muslim tongue. What he said after the judgment is hardly radical.  He said one, that the Supreme Court is supreme, not infallible. Two, that justice has not been done. And three, the battle was for justice, so Muslims should not accept the five acres of land. He did not call for armed revolution or a boycott of goods. He just said something that occurred to many people. And this small act of secular sanity makes him a hero for many young Muslims. Because no one else is saying a thing.

The Congress’ liberal Muslim face, Salman Khurshid, has revealed that he is completely out of sync with the Muslim, or even the liberal, sense of dismay at the judgment, describing them as, “some people” who “feel a bit disappointed.” He goes on to say that, “Muslims… now have a chance to show grace, generosity and reaching out to claim a place in contribution to true national integration and unity.” Reach out? Claim a place? Contribute to national unity? Was that place not theirs all this while?

What remains of the Left parties is equally discredited, with vapid statements like “While this judgment has provided a judicial resolution to this fractious issue there are certain premises of the judgment which are questionable” (CPIM). The CPI has called it a “reconciliatory judgment” to be seen “in the larger perspective of ethics, justice and secularism.”

Even the young Turks – the Jignesh Mevanis and Kanhaiya Kumars – are tweeting about the JNU agitation over fee hikes, as they certainly should, even mourning the demise of T.N. Seshan, but are mute on this verdict. An odd silence hangs in both their Twitter timelines between November 8 and November 11. The judgment comes and goes. Not a tweet. Not a whisper. These young politicians, whom the liberals embraced, who have called out Modi and Shah in fearless voices have revealed themselves to be selectively vocal, selectively just.

It is frightening, this blanket of liberal silence, which only makes stronger the majority certitude that the despair of the Muslim in contemporary India is a figment of the imagination. Illegitimate and wholly unjustified. In truth, acknowledging this sentiment is just not worth the political risk for anyone. That an Umar Khalid, targeted, trolled and vilified because of his inescapable Muslim name, is the one who continued to re-tweet comments critical of the judgment is a sign of the times. That even among our young crop of emerging voices in the public and political sphere, the non-Muslims will stay only within a strictly necessary distance of the pain of the voiceless, leaderless Muslims. They will not embrace that pain, not go out on a limb to give it credence, even if holding out hope of justice is not within their power.

But even as Owaisi plays the role of public truth teller and psychological balm for many Muslims, is he acceptable to other more educated young Muslims as a national electoral political alternative?  In his style, his aesthetic, the name of his party (Majlis-e-Ittehadul Muslimeen) his constituency will only be Muslims.  That is how he wants it, and plays it. As a political analyst friend said to me, “A Muslim can never be the leader for non-Muslims in today’s India, so why should Owaisi change his political aesthetic? He knows who he is, and who he speaks to.”

Owaisi uses a straightforward constitutional semantic, not a religious one. Yet, it is interesting that many young people, while grateful for an Owaisi to articulate their feelings, simultaneously harbour visions of another kind of leader – one capable of appealing to non-Muslims as well, or at least of not alienating them. Ultimately, even a minority up against the wall, wants a little door open into the mainstream.

The other clutch of worthies who masquerade before the media as ‘Muslim leaders’ are mostly turf-based clerics, perhaps seeking survival through photo ops with powers that be. Many agreed to meet Ajit Doval on November 10, welcoming the judgement, and giving him ‘assurances of peace’. Who are they to speak on behalf of anyone but themselves? And second, peace is not being broken by Indian Muslims.

For these so-called Muslim leaders to participate in building this noble narrative – ‘see how much maturity Indian Muslims are showing’ – is dangerous rubbish. Examine its subliminal premise – Muslims are prone to violence, to spoiling the national calm, so being peaceful i.e. doing absolutely nothing in the face of egregious violation, is something that deserves a pat on the back.

This is merely a tragic peace of the helpless.

Also read: Ayodhya’s Forgotten Mahant and His Message of Peace

Allahmer Chacha, a riot survivor of Muzaffarnagar 2013 who was forced to flee his village and his home and who remains one of the wisest men it has been my privilege to know, said to me, on camera, for my 2017 film The Colour of My Home, “Koyi kidi, makora, janwar bhi apni bhoomi nahin chodta. Woh bhi dank marta hai. Par jab zyada ho jaate hain, to majboor ho jata hai aadmi. Kya karein. Usko chodna padta hai. Bhaagna padta hai wahan se (Even insects and animals don’t willingly abandon their land. They sting when they are threatened. But when you are outnumbered, you become helpless. You have to leave. You have to flee).” This is not peace.

Reject the five acres. Or use it to build a world-standard law university. Call it IQRA, the first revealed word of the Quran. It means ‘read’. This would be a lasting reminder of the need to revisit and redeem the pledge of justice, and symbolically ground the idea of equal respect for all faiths as a marker of secular India. But the Supreme Court has granted land for a ‘compensation’ mosque, and such mosque alone. Can they change this demeaning purpose? Are our Lordships – who have travelled through time, navigating brave new worlds of religion and myth – capable of entering that most fundamental of all realms, the human need for dignity, the foundational battle against erasure?