In 25 Years Since the Ayodhya Massacre, No FIR Lodged, No Cases Registered

In the Ayodhya riots that followed the Babri Masjid demolition, 18 Muslims were murdered, almost all their houses and shops were torched and destroyed. 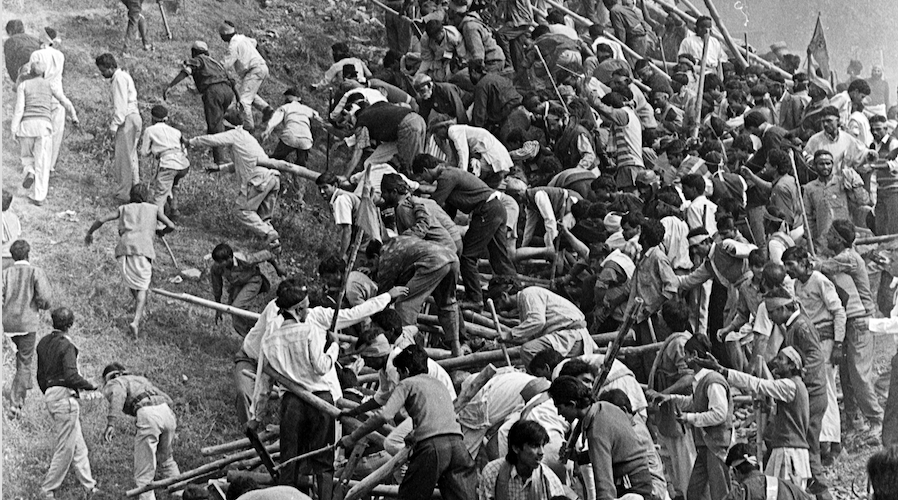 Kar sewaks on top of Babri Masjid during its demolition on December 6, 1992. Credit: T. Narayan

In the Ayodhya riots that followed the Babri Masjid demolition, 18 Muslims were murdered, almost all their houses and shops were torched and destroyed.

Kar sewaks on top of Babri Masjid during its demolition on December 6, 1992. Credit: T. Narayan

Ayodhya: After the demolition of the Babri Masjid, on the evening of December 6, 1992, karsevaks started attacking Muslim residents of Ayodhya, ransacking and demolishing their houses. Eighteen Muslims were murdered, almost all their houses and shops were torched and destroyed, including 23 local mosques. No FIR was lodged, no cases were registered of this riot.

Even after imposing president’s rule in the state, the then Congress government was unsuccessful in saving the lives and properties of the minority community in Ayodhya.

In January 1993, a delegation from Faizabad, Ayodhya met the then Prime Minister P.V. Narasimha Rao and handed over a detailed report of the riot. They appealed to him to ensure cases were lodged, investigation conducted and culprits brought to book – but no case has been lodged till date and no investigation ordered.

The Narasimha Rao government, however, taking cognisance of the report, ordered that a compensation of Rs 2 lakhs be given to the families of those who died in the riot. Compensation was granted to families whose houses were destroyed as well.

Abdul Wahid (35), a survivor of the riot, lost six family members in the massacre. “Our joint family was living in the Tehri Bazaar area, just behind Ram Janam Bhoomi police station. Around 6 pm on December 6, 1992, about a 100 karsevaks attacked our house. I was ten years old at the time, I remember my mother held my hand and ran but by then the mob had entered our house. The mob first killed my elder brother Mohammad Sadiq (15) then my relatives Mohammad Jameel (50), Mohammad Shamsuddin (60), Mohammad Salman (25), ShaukatUllah (50) and his son Toni (14) were killed. I hid in the outskirts of Ayodhya that night and the next day we found all the dead bodies. No FIR was registered by the police but we received compensation. I demand that the government constitute a commission of enquiry.”

Captain Afzal Ahmad Khan, leader of the delegation that had met Rao said, “Local citizens of Faizabad contacted the PMO and Union ministers Ghulam Nabi Azad, C.K. Jaffaer Sahreef, Arjun Singh Jitendra Prasad in the evening on December 6, asking them to send help and save lives. But the riots continued.”

“When we met Rao, we submitted a memorandum demanding FIRs be registered after the Ayodhya riots and the appointment of a commission of enquiry to probe the riot, but nothing happened,” he said.

Haji Asad, a corporator in Ayodhya, said no FIR had been lodged by the police, and they just closed the matter by writing on a piece of paper, showing that the killers were outsiders. “But who were the conspirators of the killings? No investigation was conducted.”

Piyush Shrivastava, IPS, Circle Officer, Ayodhya in December 1992, when asked if FIRs were lodged, said, “I still remember the Ayodhya riots of December 6 and 7, 1992 but this is a very old matter, I don’t remember whether FIR was lodged or not.”

A senior journalist and former member of the press council, said, “No FIR was lodged, no cases were registered, a number of Muslims were brutally killed by karsevaks, all the houses and shops belonging to the community were demolished, apart from the Babri Masjid.”

Note: While this article originally quoted the memorandum submitted to then Prime Minister Narasimha Rao said that 28 Muslims were killed in the riots in Ayodhya, compensation was only issued for 18 people. The article has been edited to quote the local administration, which had said then that they received proof of death for only these 18 people.