The letter lists donations made to the state government's fund for fighting the new coronavirus, but adds that members of the Tabhlighi Jamaat should not be helped using this money. 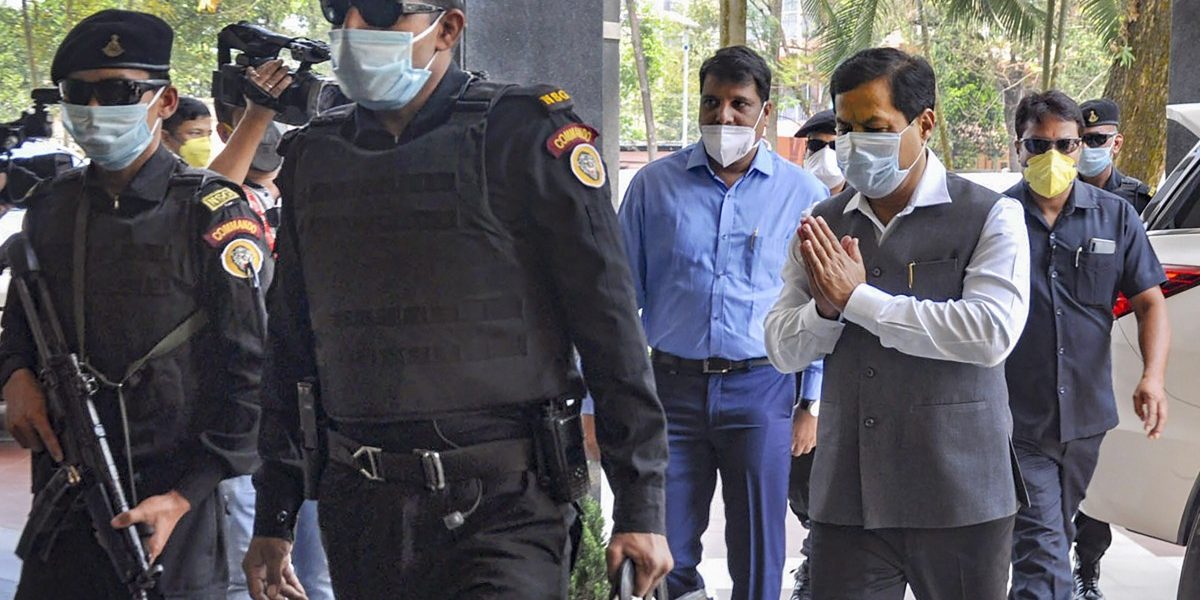 Assam chief minister Sarbananda Sonowal on his way to a meeting on COVID-19 in Guwahati. Photo: PTI

Guwahati: A letter addressed to state health minister Himanta Biswa Sarma on contributory donations by some members of Foreigners’ Tribunals to the Assam Arogya Nidhi to – for COVID-19 treatment – allegedly said that “their help may not be extended to members of violators Tablighi Jamaat”.

An alleged ‘statement’ in the letter calls out the members of the Tablighi Jamaat as ‘Jahil’ and ‘Jihadi’.

The ‘letter’, which was circulating on social media platforms especially WhatsApp on Saturday (April 11), has sent social activists and rights’ bodies into a tizzy because of its ‘communal intent’ and ‘incendiary’ language.

The letter proves, they argue, the kind of communal mindset people have to encounter when they are forced to prove their citizenship in front of these Foreigners’ Tribunals.

An activist, Zamser Ali of the Citizens for Justice for Peace (CJP), told The Wire that the letter is real as he had cross-checked the names and they matched with members of different Foreigners’ Tribunals. Ali said the letter was ‘vicious’, and written by someone with a ‘poisonous’ mindset in an attempt to please the ‘saffron’ bosses of the state.

The letter is dated April 7, and the letterhead says ‘Government of Assam, Office of the Member Foreigners’ Tribunal, Baksa district at Tamulpur’.

The names of 12 FT members, along with their donation amounts, are mentioned. They are from districts like Kamrup (both Rural and Metro), Barpeta, Morigaon, Baksa, Karimganj and Silchar, which is the headquarters of the Cachar district in Assam.

It also mentions the names of seven FT members from the Tamulpur office in Baksa as well and their respective ‘contributions’.

The letter is addressed to Sarma by one K.K. Gupta (Kamalesh Kumar Gupta) who is a member of a Foreigners’ Tribunal in Tamulpur, Baksa district.

“It is to be ascertained whether the letter is 100% factual. The content which is mentioned at the bottom of the letter is a communal vitriolic statement. Words like Jahil and Jihadi are not only venomous, but a deliberate effort to malign one particular community. My sources which have confirmed that the letter is real. If FT members have such a mindset, it can be imagined how they treat people from that particular community during FT hearings. It is tragic,” said Ali.

The Wire also reached out to Debabrata Saikia of the Assam State Congress and leader of the opposition at the state legislative assembly. “The state government should issue a show cause notice immediately. We will draw the attention of the state government to the letter. We will make a decision about it soon. The letter exposed communalism and bias. Guidelines from the World Health Organisation (WHO) have repeatedly mentioned that the coronavirus has no religion, caste or creed,” he said.

Shajahan Ali Ahmed, an activist from Lower Assam, said, “Even a dangerous disease like COVID-19 has been communalised. This was not expected from FT members who are educated and literate. If they behave in such a manner, what example they will set?”

The alleged letter, besides showering praises on Sarma as being the “guiding force in the fight against never before danger to the world-Coronavirus which have inspired us to come forward to join your army”, also tried to draw his attention to the members’ remuneration which has not been increased since 2015.

The letter says that a total of Rs 21,999 was collected by seven members of the Tamulpur FT office alone. Gupta even begged forgiveness from Sarma for not being able to ‘donate substantially’. The rest of the members from different FTs in Assam each donated Rs 3,000, the letter said.