While the "fake" account seems to have been in regular use since August 214, the account Patel claims is her real one has no tweets whatsoever and was created in July 2016. 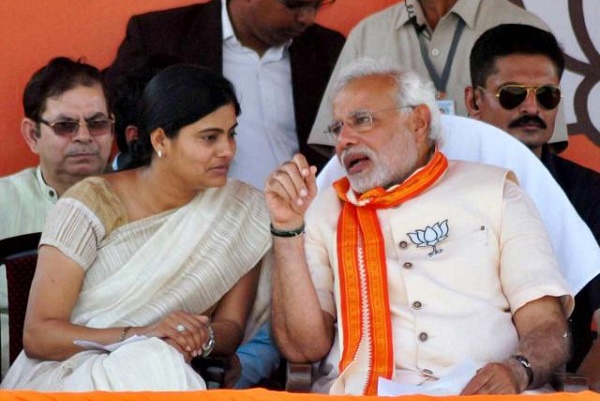 New Delhi: Newly-appointed minister of state for health and family welfare Anupriya Patel has already found herself in the midst of a curious controversy. The 35-year-old is one of the youngest members of Prime Minister Narendra Modi’s council of ministers. Her appointment was seen by many as Modi’s bid to form an OBC alliance before the Uttar Pradesh polls next year. Her party, Apna Dal, is a constituent of the National Democratic Alliance and has a strong following among ‘non-Yadav OBCs’, especially Kurmis.

After she was sworn in, earlier tweets from what was believed to be her personal handle created an uproar on social media for their communal content:

(‘Crores of rupees have been “sacrificed” on Akhlaq [the Muslim man murdered on suspicion of eating beef] but not even a word for the Hindus of Kairana. This ‘namazvadi’ government is just great!’) (‘Our own traitors have destroyed us. Otherwise have you ever heard of 100 crores [the numerical strength of Hindus in India] getting scared of 20 crore mullahs [Muslims]’)

The tweets, posted from the handle @anupriya_patel, were deleted soon after they started gaining traction after she was sworn in as a minister. Several took to social media to respond to what was said.

If it's genuine, then @anupriya_patel has no business to be in the cabinet of India.
What else is hate speech? https://t.co/qhEkVfAmw8

In the meantime, Anupriya Patel filed a police complaint that saying that a fake account under her name was tarnishing her reputation. She specifically named @anupriya_patel as the fake account in the complaint, saying her real twitter handle was @AnupriyaSPatel. “There are several fake Twitter accounts active in my name, and I bring this to your notice that in future they might be used to tarnish my social and political image. My official Twitter handle is @AnupriyaSPatel. A handle named @anupriya_patel has posted an insulting tweet. A snapshot of the same has been attached with the complaint. Kindly investigate the matter at the earliest,” Indian Express quoted Patel’s complaint as saying.

Not everyone is convinced by her claims, for justifiable reasons. On the day of Modi’s cabinet reshuffle, union minister of state for commerce and industry Nirmala Sitharaman tagged Patel’s “fake” account while congratulating her, as did union minister for women and child development Maneka Gandhi and several other leaders:

My compliments to Smt. Anupriya Patel @anupriya_patel for being sworn in as Minister of State at Rashtrapati Bhavan in Delhi. #ModiCabinet

While the “fake” account seems to have been in regular use since August 2014 and has more than 5,000 followers, the account Patel claims is her real one has no tweets or mentions whatsoever and was created only in “July 2016”.

What is also not clear is why the operator of the “fake” account should have promptly deleted the two controversial, communal tweets if the purpose of the fakery is to “tarnish her social and political image”.