According to eyewitnesses, the police did not take the matter seriously at first and took too long to respond to the situation. 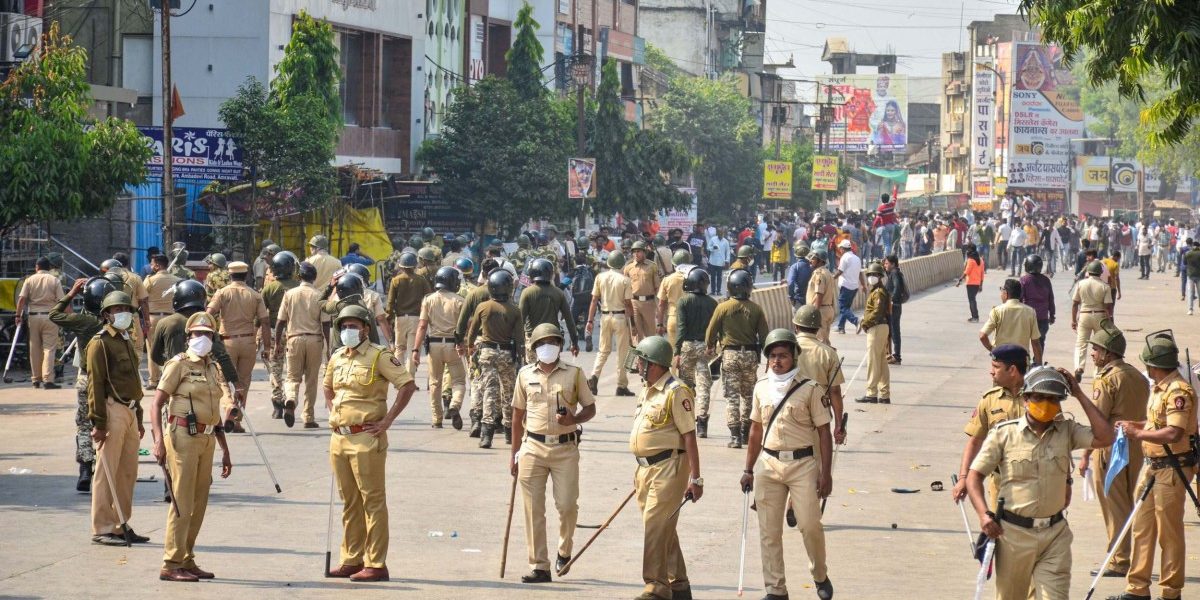 Amravati (Maharashtra): Scathing victims’ testimonies from Amravati in Maharashtra reveal a trail of loss for Hindu and Muslim families alike in the fresh wave of violence to hit the state. They also alleged ‘incompetence’ of the local police administration, first in identifying the looming threat of violence and second in deploying adequate police forces in a timely fashion.

Amravati became the centre of communal discord after a peace march by a 35,000-strong Muslim crowd allegedly turned violent on Friday last week. A few participants from the march allegedly stormed and ransacked Hindu shops. CCTV camera grabs of the violence were subsequently widely shared in local WhatsApp circles, generating enormous unrest and anger. In response, the local BJP unit called for a bandh on Saturday. A mob belonging to the Hindu community descended on one of the key squares – Rajkamal chowk – of the town by 9 am. By 11 am, the crowd had grown beyond the control of the police and many of them took to vandalising two nearby dargahs and shops owned by Muslims.

One such Muslim shopkeeper The Wire met on the ground was Shadaab Khan, who ran an electrical shop close to the Rajkamal chowk. On Sunday, this reporter found him trying to salvage a working device or two from the coal-black debris of burnt electrical appliances. He said that his shop had only started recovering from the business loss of lockdowns when the communally charged attacks hit him. Khan had recently raised Rs 82,000 in cash. All of that is now charred paper.

Khan received a call from his uncle on Saturday morning informing him that “Hindutva rioters had broken down the lock of his shop.” Khan’s attempt to reach his shop was cut short after the police stopped him on the way. Within a few hours, the rioters had set fire to his shop.

“All my inventory from the dealer as well as the devices I was repairing for my customers have been burnt. The cash I was holding has gone up in flames. My total loss comes to Rs 12-15 lakh….It (the violence) has brought me to an absolute zero. I don’t know what I will do,” he said.

Barely a few steps from Khan is Md. Shahbaaz, a 27-year-old whose cigarette kiosk next to a dargah was destroyed by a mob. Besides running a pan stall, Shahbaaz was also responsible for the upkeep of the dargah.

Besides the damage to the dargah, Shahzaab is also staring at a crippling financial loss. Shahzaab’s refrigerator was thrown away by the mob while his inventory – cigarettes, gutkhas, mouth fresheners, cold drinks – were all looted along with cash.

“The rioters knew that the pan shop is next to a dargah and it belongs to a Mohammedan, and that is why they attacked it…I have suffered a loss of Rs 50,000 to Rs 60,000.”

Meanwhile, the testimonies from Hindu residents who faced their share of terror is no less shocking. Their testimonies also underscore how “unprepared” the local police force was in seeing the mob build-up and preventing an attack on the local Shani mandir.

The Wire spoke to Sanjay Sharma, who identified himself as the priest of the Hanuman Mandir in Sakkar Saath, a Hindu-dominated area that was in the eye of the storm during Saturday’s violence. Sanjay conceded that he pelted stones at a 1,500-strong Muslim mob that was allegedly intent on vandalising the Shani Mandir in Sakkar Saath. From Saturday morning itself, Sanjay could see a strong build-up of a Muslim mob close to the temple. He said that when he and Sakkar Saath residents told the police about it, they did not pay much heed to it in the beginning but later sent two armoured cars by 12-12:30 pm.

“When my brother went and spoke to the police in the thana, they deployed two police cars (armoured trucks) by 12-12:30 pm and stood there (at the intersection between Sakkar Saath and Chandni Chowk.). There were 10-15 cops that came out of the cars and even from them, 10 left and five stayed behind. When the mob of 1,000-1,500 strong started attacking, what were the 4-5 policemen going to do about it? The cops also pelted a few stones and moved out of the way. The mob kept moving towards the mandir and they wanted to demolish it. I went ahead to stop them and I also pelted stones at them…Everyone fights for their religion. I also fought for my religion. I fought so that my temple wouldn’t be wrecked down, otherwise I could have run away as well. This is my temple. This is my home. The neighbourhood is a part of my family. How can I desert them and run?” Sharma said.

A senior Maharashtra police officer told The Wire that “10-12 highly communally charged incidents” could be averted because of timely police action and that the actual damage of public property could be contained to a great extent. “Despite heavy deployment in Rajkamal Square, disturbances did take place and inquiries will be set up if there appears to be a lapse in policing duties,” he added.

Sharma said that in the course of the altercation, he tripped and a few from the violent group took a boulder and hit him on the head. The Wire found his head covered in bandages, his face bruised and him walking with a limp. On Saturday, as this reporter travelled through the inner lanes of Sakkar Saath, mentions of the “pujari” being hurt and Shani Mandir being vandalised were common and worked as a war-cry to galvanise Hindus into fighting the Muslims.

“My major complaint is that the police did not step in at the right time to help us. Yes, they came in later on but when were asking them to step in, they did not heed us. This isn’t a one-off thing in this city. Since 1983, whenever riots happen in this town, they start from here. The police knows that this is very sensitive area and yet they did not deploy adequate protection in this area in time,” Sharma said.

As on Monday, a tense silence prevails in the city and no new communal outbursts have been reported. A total of 113 people have been detained in 10 police station jurisdictions. Among those arrested is BJP leader and former state minister Anil Bonde. Internet services remain suspended in the city.

Note: This report has been updated since publication to include a senior police officer’s comments.