For Mewat's Muslims, Cows Now a Source of Both Livelihood and Fear

Economic backwardness, unemployment, lack of health facilities and broken roads are issues that plague Kolgaon, Rakbar Khan's village. But no one talks about this. 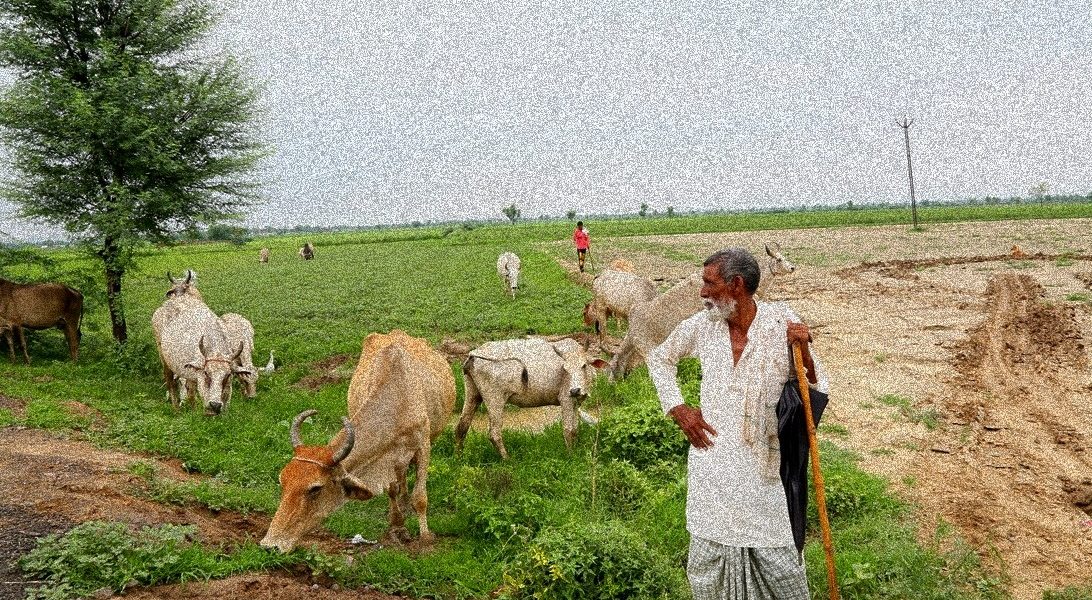 It is common to see Muslim cowherds on the way from Ferozepur Jhirka to Kolgaon. Credit: Moniza Hafizee/The Wire 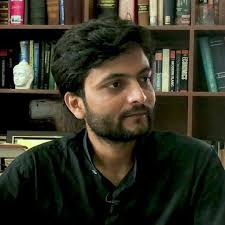 Kolgaon (Haryana): Let’s begin this conversation with the cow, which will take us to a village. The village is called Kolgaon. We are talking about the cow because the cow is currently a subject of discussion everywhere from the Supreme Court to parliament. You may ask: Why Kolgaon? Where is this village and why are we talking about it? 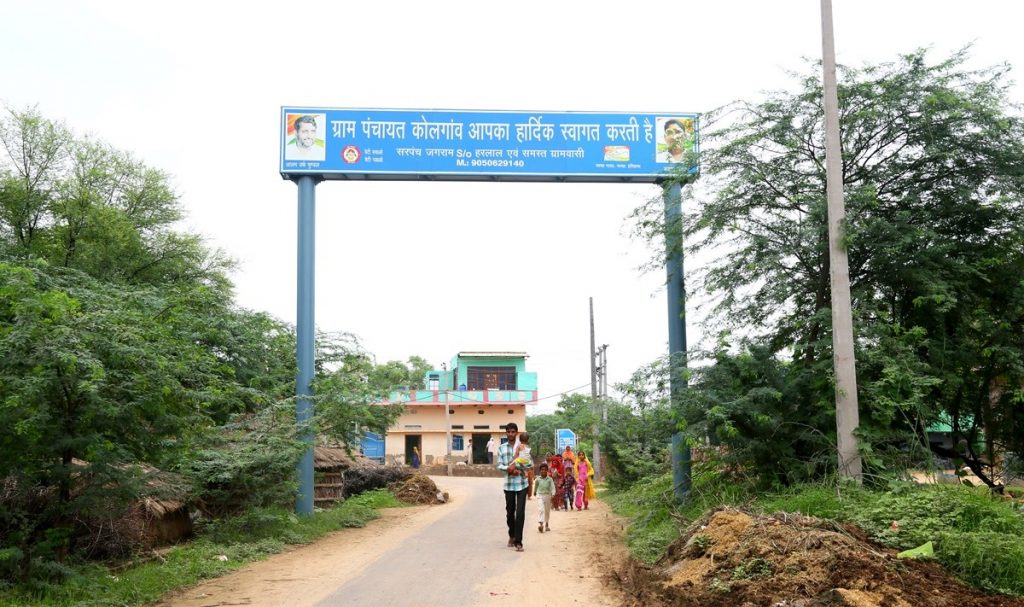 Here is the answer.

Kolgaon is a village in Haryana’s Mewat region. Sharing its border with Alwar in Rajasthan, the village is surrounded by the Aravalli Hills on all sides. Recently, a mob attacked and lynched a Muslim man, Rakbar Khan, on the suspicion of cow smuggling in Alwar’s Ramgarh village. Rakbar used to live in Kolgaon.

Like thousands of villages in India, Kolgaon awaits development. Education, health services, pucca houses, playgrounds, clean drinking water, a drainage system – the list of issues requiring redressal is long indeed. In a nutshell, a flooded road and mobile network is all Kolgaon has to show for its development.

Around 600-700 families live in a mix of kutcha-pucca houses in the village. According to locals, 2,000 cows also inhabit the village. Two to four cows or buffaloes can be seen tied in front of every house.

Rakbar has been given a burial after his postmortem, but a week later, his wife Asmina is still inconsolable.

When I approach Rakbar’s mother, Habiban, to enquire about the incident, she holds my hand and makes me sit next to her. Her voice is lost in her relentless weeping. In a hoarse voice she says, “What they did to us is wrong. I just have to save my daughter-in-law. That’s all.”

She keeps holding my hand. It is the grip of a frightened person who just wants to be spared from the hatred that has taken her son’s life. She needs help to let go of the incident and be able to live in peace again. 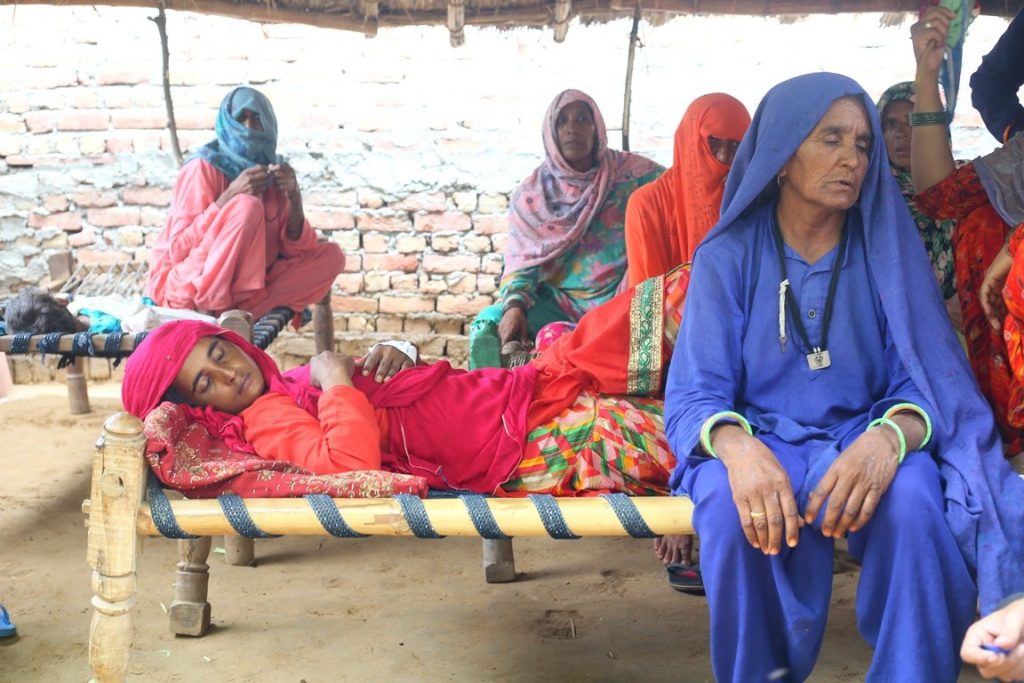 The family’s house has one 10’x12′ room. Next to the room is a shed, where Habiban is sitting surrounded by women relatives and neighbours.

Looking at them, it seems as though they are guarding the helpless family. Teary-eyed, all of them seem to be grieving the fact that they can do nothing for Rakbar’s family.

One cannot sit for long in such an atmosphere. Fear is buried deep. What can be done in a country where you become a victim of violence over your religious identity, which is not even your own choice? It came to be associated with you by birth and you cannot easily change it. You may hide it by changing your dress, but not from your Aadhaar card, ration card or other identity cards. And so, like Rakbar’s family, you ask yourself, “Can I be persecuted just because I am ‘me’?”

Rakbar has left behind seven children. The eldest daughter is 11, while the youngest son is one. They are yet to fully comprehend the tragedy that has befallen the family. Since morning, several mediapersons have gathered them together and clicked photographs. 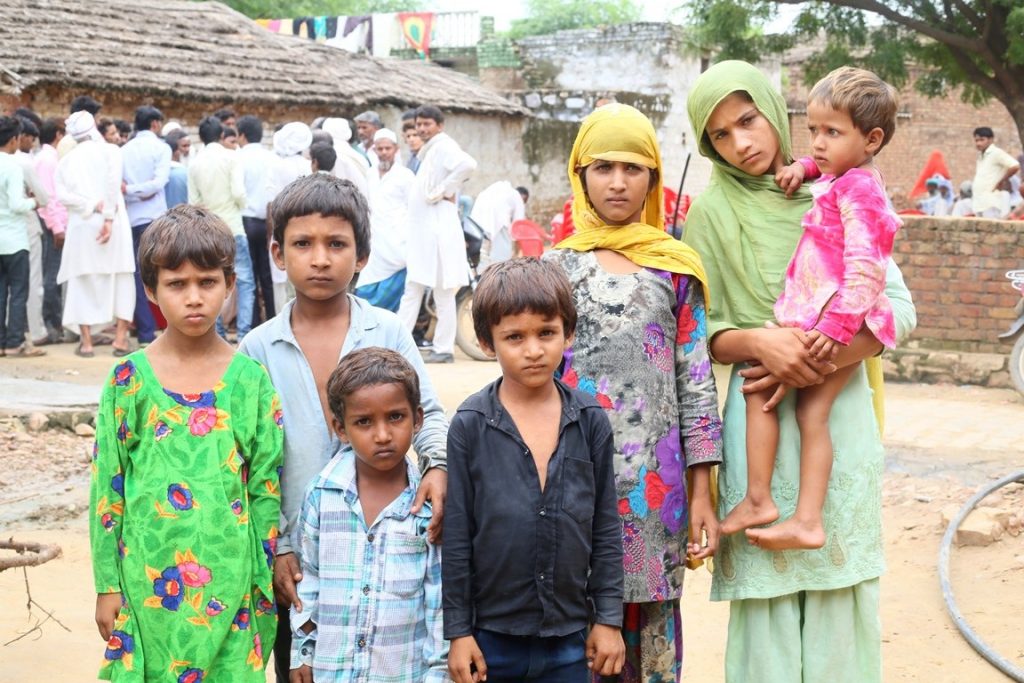 A single-room house, a couple of huts and five cows are the only property owned by the family. Rakbar’s father Suleman is 60 years old. Though silent now, he is a picture of grief, mourning his dead son.

Visitors are pouring in. To everyone he has the same question: is there anywhere they can take their plea? Looking at him just affirms that he has neither the strength nor the anger within him to fight.

The grief of losing his son and the question of survival is making him weak. With his young son gone, the burden of responsibility of the family has fallen on his shoulders. Being illiterate, he is afraid of legal proceedings. The horrifying death of his son has left him so scared that he finds it difficult to trust anyone. 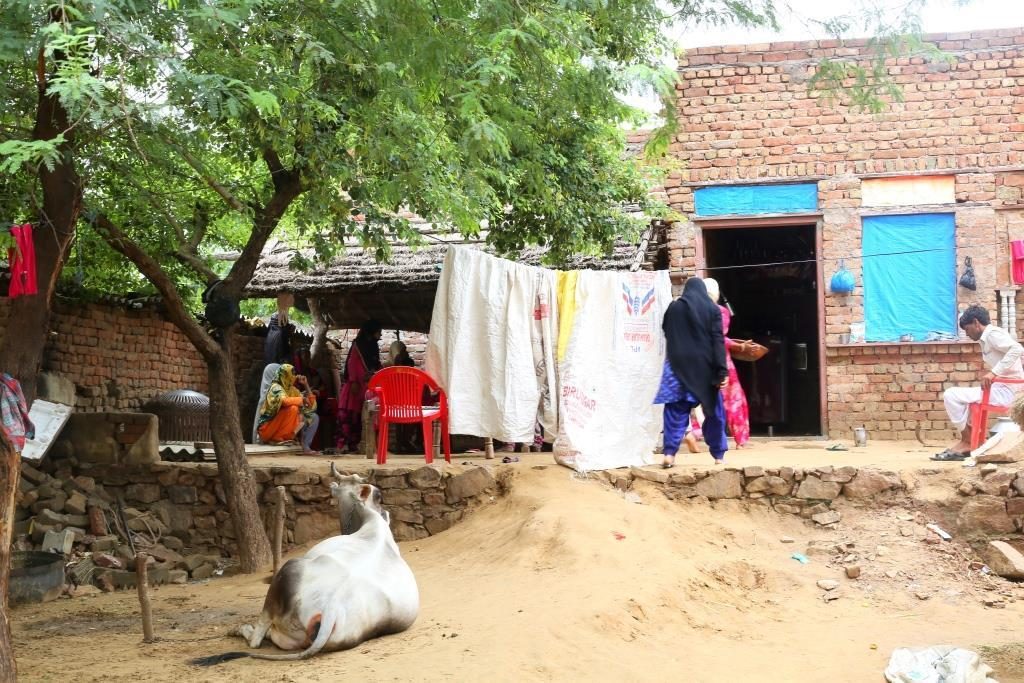 When a person from the National Legal Service Authority came to collect Rakbar’s Aadhaar card, ration card and bank details to extend financial help to the family, Suleman took him to the sarpanch, asking him to explain what he was saying.

Similarly, when the Rajasthan police arrived for the investigation and asked him to put his thumb impression on a piece of paper, Suleman roamed around for hours with the sheet asking people what was written on it and whether he should sign it or not. After being pressured by the police and receiving confirmation from several people, he finally put his thumb imprint on it.

Right now, with sluggish police action and legal processes in the country, besides the powerful accused who allegedly have political protection from the government, justice for victims like Suleman is a distant hope.

The police of two states is supposedly with Suleman, since Rakbar hailed from Haryana but was killed in Rajasthan. 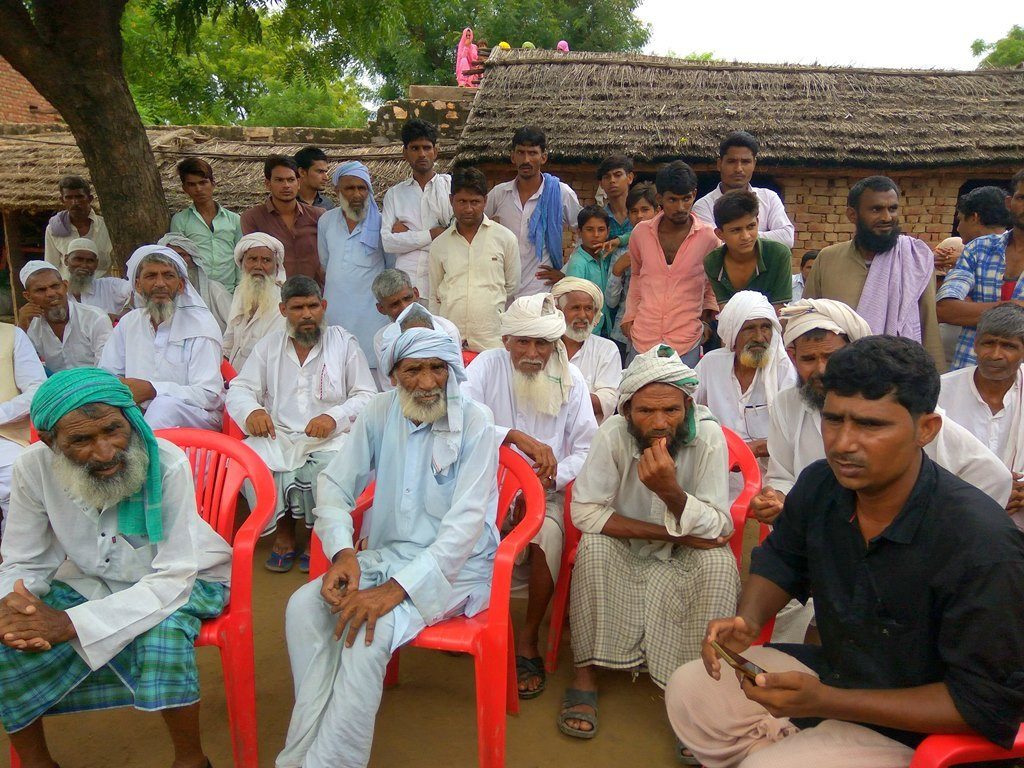 When asked about Rakbar, he tells us, “We just want Rakbar’s murderers to be hanged. We are poor people. We are not capable of smuggling cows. Rakbar has five cows and he used to sell their milk. He was a labourer and struggled to support the family. Ask anyone in the village. Nobody can tell you a bad thing about him. He had saved Rs 60,000 over a long time and purchased the two cows. Now the money and the cows – both are gone.”

The role of the police is also under scanner in the entire case. Harun says, “How can we question the police? We think the alleged gau rakshaks are to blame. They had already beaten him up brutally. His legs were fractured in several places, his hands and ribs were broken and his neck was contorted. It was a job of many people. More than the police, it is the act of VHP leader Naval Kishore Sharma’s goons. The police has rounded up several people but many of them are still free. An investigation must be carried out.”

In the village, 80% of the people are cattle-herders, and 80% of the population is Muslim. They are known as Meo Muslims.

An elderly villager, Umar, says, “People in the village are not very educated. Except for a couple of families, no one has a government job. All of us are involved in farming. There is a forest next to the village which makes an easy grazing ground for the cattle. The cost of rearing a cow is low, and comes cheaper as compared to a buffalo. A milch buffalo is priced at Rs 1-1.5 lakh while a cow can be bought for anywhere between Rs 40,000 and Rs 50,000. Due to the low maintenance requirements, people in Mewat are in the habit of rearing cows.”

He adds, “As far as purchasing cows from Rajasthan is concerned, people buy it from wherever they can strike a cheap deal. Alwar is not outside the country. See the hill right in front of the village, that’s Alwar. Where else can we go if we cannot purchase cows from Alwar? Ramgarh is quite close by and we purchase our daily necessities from there only.”

Presently, the locals have turned cautious about cows. After the terrible incident, they are faced with a crisis of their livelihood. If they don’t rear cows, how will they support their family? Most of them see a political strategy behind the violence.

A social worker, Sawai Singh, who has reached the village in light of the incident, explains the situation, “These alleged gau rakshaks are self-proclaimed watchdogs. There are legal provisions to deal with them. There is no law that supports what they do. But what can we do about those who have left the general public at the mercy of these groups for political gain?”

“In fact, they are not gau rakshaks but extortionists,” he adds. “If they are paid money, they will allow anyone to take the cow, Hindu or Muslim alike. In case a Muslim refuses to pay, they will accuse him of cow smuggling. Had they cared so much about cows, wouldn’t they have saved thousands of cows who died at the cow shelter in Jaipur’s Hingonia? Right now, with their actions, they are tarnishing the Hindu religion, not Muslims.”

“Take a tour of the entire area. More Muslims rear cows here than Hindus. Meo Muslims have the best breeds of cows including Rathi and Tharparkar. But now there is so much fear in a community that they are afraid to even utter the word ‘cow’.”

Economic backwardness, unemployment, lack of health facilities and broken roads are issues that plague the village – but no one talks about it. Vote bank politics has left the debate centred on Hindu-Muslim, cow smuggling and cow protection.

It reminds one of famous Hindi satirist Harishankar Parsai’s story titled Ek Gaubhakt se Bhent (A meeting with a Gaubhakt). In a dialogue, he severely ridicules the entire concept:

“Swami ji, as far as I know, rather than gauraksha, the public has inflation and economic exploitation on mind. The public agitates against inflation. It goes on strike demanding hike in salary and dearness allowance. The public is fighting for economic justice and here you are, launching a gauraksha movement. What sense does it make?”

“Child, it all makes sense. See, when the public demands economic justice, then it should be engaged in other matters otherwise it turns dangerous. The public says, ‘we demand inflation and exploitation to stop, profiteering to end, and salaries to increase.’ Then, we say to it, ‘No, your basic demand should be cow protection.’ Child, we tie the public to a post like a cow when it is on its way towards economic revolution. The movement is only a distraction for the masses.”

The political message that is being sent out in the Alwar lynching case is even more disheartening for Rakbar’s family. Instead of taking lessons from all the previous incidents of lynching, the way insensitive statements are being rolled out is unfortunate.

Not only are Muslims in the area being beaten and killed, but they are being held morally responsible for their own murders. Despite all this, the locals in the area are steadfast in their belief in Hindu-Muslim unity. Political leaders only want to destroy this harmony for electoral gains, they believe.

As our team was leaving Rakbar’s house, a cow broke free and began running. Rakbar’s eldest daughter took hold of it and tied it to another post. When leaders start running amok based on communal issues, the public also needs to take control and bind them to issues of education and employment.

This report appeared first on The Wire Hindi. It has been translated from Hindi by Naushin Rehman.