The police insist nothing happened but have also filed an FIR against unnamed persons for violating the lockdown. 'We are investigating and will take action', the DCP for Outer Delhi says. 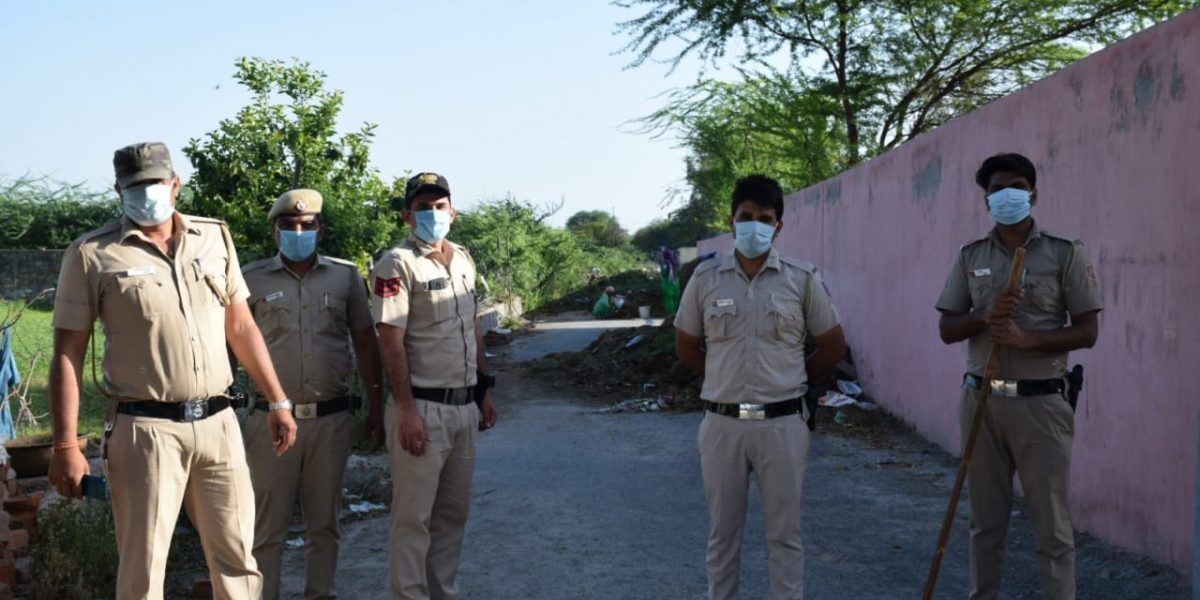 The Delhi Police just outside the walls of the mosque. Photo: Ismat Ara

Mukhmelpur (Delhi): On Saturday morning, a video of a small mosque inside a graveyard in Mukhmelpur village in Alipur, North West Delhi, went viral on social media. In the video, it appeared the mosque had been vandalised – there are bricks strewn about, furniture apears to have been smashed and the roof of the structure has been partially burnt.

Mukhmelpur, 12 kilometres from the Haryana border, had a recorded population of 4,911 in the 2011 census and,  according to a police official, houses around 500 Muslims and roughly 5,000 Hindus today. The mosque, situated inside a graveyard, is used to offer “janaza”, a prayer before the burial of the dead in accordance with Islam, the police said.

One local resident who declined to be identified told The Wire the video doing the rounds on social media was authentic. It was shot Saturday morning at 7 am and shows the vandalised mosque. Though initially reluctant to speak, he said that a group of 15-20 men came to the mosque on Friday night and vandalised it.

He said, “Mahaul bahut kharab ho raha hai yahan ka. Humein issi ilaake me rehna hai toh hum nahin chahte media me ye baat jaaye aur koi involve ho,. Hum compromise karne ke liye tayyar hain (The environment here is extremely volatile. We have to live here only, we don’t want this to go out in the media and for outsiders to get involved, we will work out a compromise).”

“They vandalised the mosque because they think we will come in huge numbers to offer namaz and spread coronavirus. But the truth is, since coronavirus has spread, not more than two or three persons have been using the mosque,” he said.

The man said he and his family have been sitting at the police station since the morning, answering questions on whether or not there has been a dispute between the two communities. “The police, after seeing what happened yesterday, asked us whether we had a fight with somebody. We said no,” he said.

According to him, a rumour had spread last night about an alleged dispute between Hindus and Muslims. The police questioned people and found nothing wrong. Much later in the night, he said, he heard noises coming from the mosque.

“At night, we heard noises of something being broken. It was in the morning that we saw that it was the mosque,” he said. 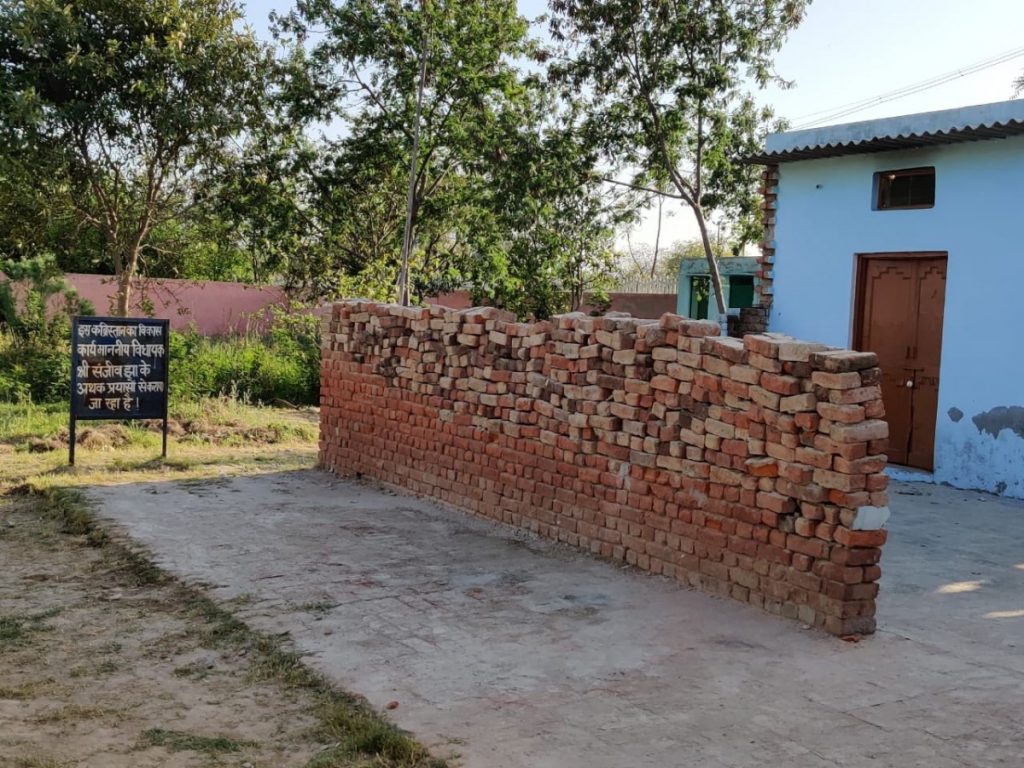 The outside of the mosque next to the graveyard in Makhmelpur. Photo: Ismat Ara

He also claimed that on February 21, another religious site was also vandalised in the same locality. “Masjid ke piche peer ki mazaar bhi hai, woh bhi Shivratri ko todi gayi thi. Uska bhi issue banane ki koshish ki gayi, magar humney hone nahin diya. Gaon humara achcha hai…par 10-20. log kharab log hain. Woh bheed me aate hain, hum unka naam bhi nahin le sakte. (There is a grave behind the mosque, that too was broken on Shivratri. It’s a nice village, but a few people are not good. They come in a crowd, we don’t know their names.) “Despite ten people being in the army from the family, we are still anti-nationals for them.”

When this reporter reached the site and saw the mosque, it looked untouched from the outside. “Todi thi, magar abb theek bhi ho gayi. Police bhi khadi hai yahan pe subah se koi anhoni na ho jaaye iss liye. Police ne subah me aake bola humse ki hum masjid theek karwa dengey, hum tumhare saath hain (It was broken, but has been fixed up now. The police has also been here since morning so nothing else happens. When they came in the morning, they said that they will help fix the situation and that they are with us),” a local said.

A clutch of policemen could be seen patrolling in the area. While they denied that this was unusual, they said that they had come because they “don’t want any sort of communal tensions to arise in the area”.

However, they did not allow this reporter to enter the mosque.

The Delhi Minorities Commission has asked the Delhi police to lodge an FIR and look into the matter. In a letter to the commissioner of police, the chairman of the commission, Zafarul-Islam Khan, said, “I have received a report and a video (attached) which says that at around 8 pm last night – 3 April 2020 – around 200 people attacked a mosque in village Mukhmelpur under Alipur police station in North West Delhi while there were 2-3 persons inside. The mob attacked the mosque, ransacked it, burnt it partially and demolished some of its parts including the roof. I tried to phone PS Alipur this morning at its given phone number (011 2720 2265) but despite repeated attempts could not connect. I am informed that the local police is trying to patch up the matter by arranging a compromise between the two communities.” Khan’s letter also said, “It is unbelievable that this could happen in the national capital. The issue cannot be patched up artificially by arranging a compromise where a religious place has been ransacked and partially burnt and demolished.” 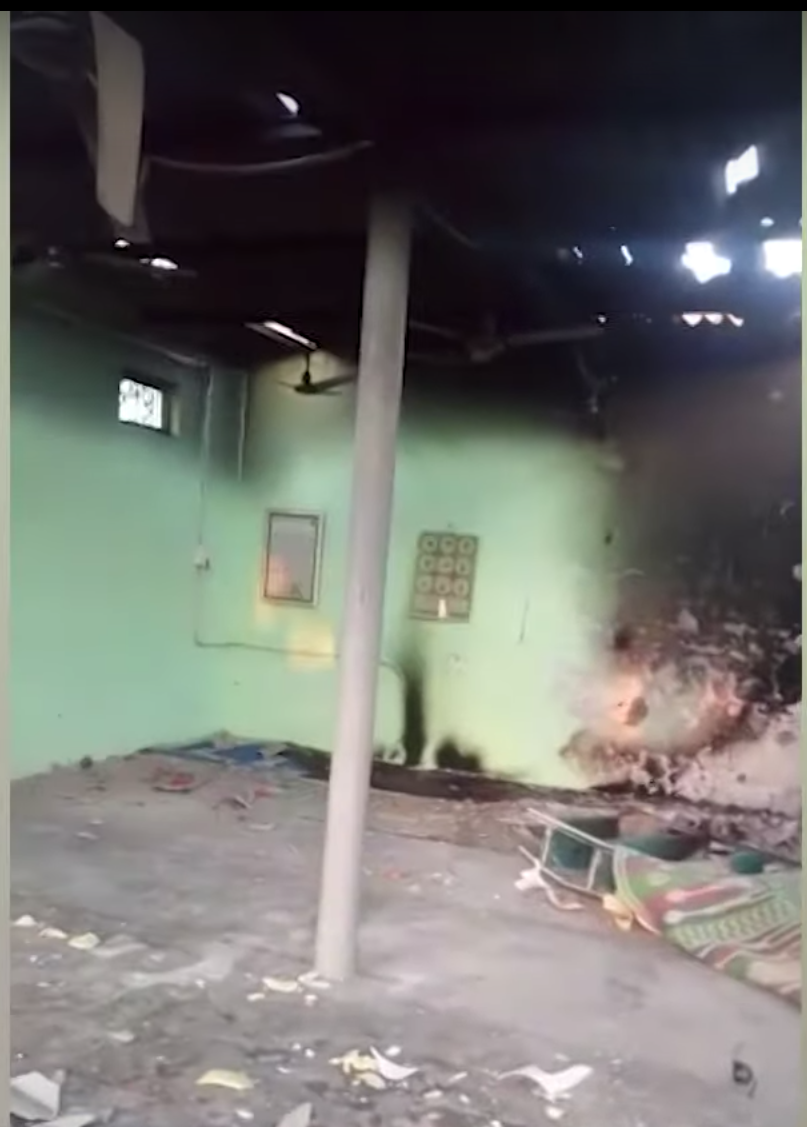 Screenshot of video showing scorch marks on the wall and partly burnt roof.

DCP (Outer Delhi) Gaurav Sharma, told The Wire that an FIR has been lodged under Section 188 of the Indian Penal Code against those who unlawfully congregated outside the mosque last night. He said, “Last evening, a few boys were spotted in the mosque by a passerby. That person called the police and said that a congregation was starting in the mosque.”

When the police went to check, only two-three young boys were found there.

According to Sharma, when the parents of these young boys were informed, they called up the bystander who had informed the police initially of the matter and asked him why he had called the police instead of simply asking the boys to leave. “Both these families are neighbours. Now, they had a tussle among themselves. It was just that. There was no attempt to break or vandalise the mosque.”

“Despite this, since there was a flouting of the lockdown, we have still filed a case against those who were outside their homes. . Now we will investigate and find out who these people were,” he added.

He also said that the mosque as seen in the video has been in that condition for the past few months. “The burn that can be seen is because some local people who work in the fields sometime use this site as a kitchen.”