The overall purpose is not merely to polarise but also rob women of their rights and ability to take their own decisions. 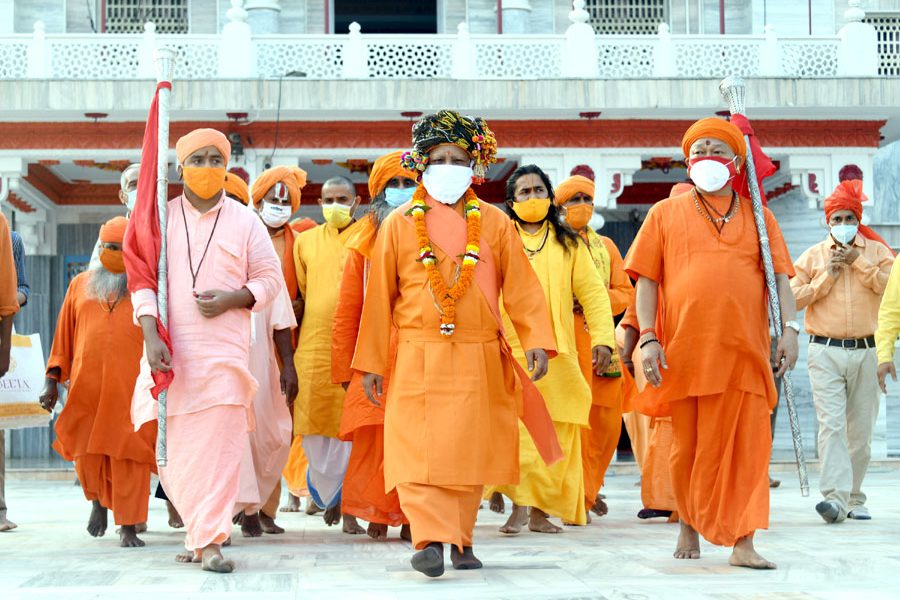 Of all the BJP chief ministers, it is Yogi Adityanath who cleaves most closely to the Hindutva agenda.

While he speaks about development and makes tall claims about achievements in the fields of education, health, etc., his government has done nothing except implement policies and laws that target the minorities and Dalits, deepen communal polarisation and increase the miseries of millions.

His government has also overseen the worst violence against women and has done nothing to either ensure their security or their access to justice.

On becoming chief minister, he lost no time in ruining the entire meat industry, along with trade in animals and the leather industry in the name of protecting the cow. While Muslim lives and livelihood has come under severe attack and hundreds of Muslims have been arrested under the National Security Act and other criminal sections for their purported involvement in cattle smuggling and slaughter, lakhs of Dalits have lost their jobs in tanneries and their small businesses related to leather have been badly affected.

In addition, farming communities have lost their earnings from cattle-rearing and their crops to the attacks of stray cattle. At the same time, some of the largest meat-export houses are still to be found in Uttar Pradesh and their production and earnings have increased manifold. Many are owned by BJP leaders.

Inter-faith marriages between Muslim men and Hindu women have always attracted Adityanath’s ire and, on becoming chief minister in April 2017, he lost no time in making his intentions clear. Within days, an inter-faith couple was assaulted in Meerut by his private army of vigilantes, the Hindu Yuva Vahini. On May 2, when a Hindu woman eloped with a Muslim in Bulandshahr, ‘enraged’ Sanghis held a violent protest and a Muslim man who had nothing to do with the couple was killed. With impunity, of course.

This has been the pattern for innumerable attacks since then.

Then suddenly, a spate of inter-faith marriages were reported from Kanpur and Adityanath harangued district officials to take strict action against what he said was a planned and funded ‘love jihad’ movement.

Several Hindi papers jumped into the fray and wrote incendiary articles about ISI involvement, hawala transactions and even foreign funding behind this conspiracy to lure Hindu women into marriage with Muslim men, many of whom had seduced them under false pretences of being Hindus themselves. The Bajrang Dal held several demonstrations against the administration for its laxity and, in September, a Special Investigative Team  (SIT) was set up to enquire into 14 such marriages.

Its report was submitted in November and the IG of Police held a press conference to announce that no evidence of ‘love jihad’ had been found.

Meanwhile, on September 24, Justice Tripathi of the Allahabad high court, delivered a strange judgment in a case where an interfaith couple had married after the Muslim woman converted to Hinduism. They approached the Court for protection but Justice Tripathi, completely ignoring this plea, ruled that conversion just for the purpose of marriage could not be accepted and that, therefore, this marriage itself was not in order.

While in fact this particular relationship is one that the Sangh Parivar encourages, Adityanath quoted selectively from the ruling and said in a public meeting that Muslim men who entered into relationships with Hindu women would be arrested and even killed (‘Unka Ram naam satya hoga’).

Coincidentally, within the next month, different judges of the same high court gave judgments very different from Justice Tripathi’s.

On November 2, in a case in which a same-sex couple appealed for protection to the court, the judge ruled that their relationship was completely legal and that they should be given all protection by the administration and the police. On November 11, when an interfaith couple went to the court for protection, a two-judge bench passed a comprehensive order in which they said:

“We do not see Priyanka Kharwar and Salamat as Hindu and Muslim, rather as two grown up individuals who out of their own free will and choice are living together peacefully and happily…The Courts and the Constitutional Courts in particular are enjoined to uphold the life and liberty of an individual guaranteed under Article 21 of the Constitution of India. Right to live with a person of his/her choice irrespective of religion professed by them, is intrinsic to right to life and personal liberty.

“Interference in a personal relationship would constitute a serious encroachment into the right to freedom of choice of the two individuals…then neither any individual nor a family nor even State can have objection to relationship of two major individuals who out of their own free will are living together. Decision of an individual who is of the age of majority, to live with an individual of his/her choice is strictly a right of an individual and when this right is infringed it would constitute breach of his/her fundamental right to life and personal liberty as it includes right to freedom of choice, to choose a partner and right to live with dignity as enshrined in Article 21 of the Constitution of India.”

But constitutional proprieties mean nothing to Adityanath who is determined to inflict the cruelest punishments on those committing what he and the Sangh Parivar considers the most heinous crimes – religious conversion away from Hinduism and interfaith marriages between Hindu women and Muslim men.

The Uttar Pradesh Prohibition of Unlawful Conversion of Religion Ordinance, 2020 promulgated on November 28 is the result.

Since then, indescribable miseries have been inflicted upon interfaith couples in the state including on those that were married before the ordinance was passed.

Couples have been torn apart; Muslim husbands and their relatives have been manhandled and sent to jail, a pregnant woman has been the victim of brutality that has probably been responsible for aborting her child; another, also pregnant, is in hospital surrounded by her own family that is refusing to allow anyone near her and is determined to have her child aborted.

There have been disturbing images of women being dragged on the streets by their relatives and of young men being beaten and kicked.

Some respite was provided by an Allahabad high court bench which, on December 18, stayed the arrest of Nadeem against whom the first FIR after the promulgation of the ordinance had been filed. A writ petition demanding that the ordinance be declared ultra vires was also filed by his lawyer. On the same day, the two-member bench of which the Chief Justice was a member was also approached with the same plea by another lawyer. Notices have been issued to the government and the clubbed pleas will be heard on January 7.

Meanwhile, while one person and his brother have been released on bail, several others are being dragged to prison and separated from their wives who are undergoing tremendous physical and mental violence.

Adityanath’s recent moves while targeting many Muslims, are subjecting numerous Hindu women to unimaginable misery and attacks. The courage that they are displaying in facing a hostile social environment, attacks and pressures from their own families and the threats of violence from the Bajrang Dal is amazing.  They are fighting to protect not only their own right to choose a life partner but, in fact, they are striking a blow to safeguard the rights of all Indian women.

Historically, women’s right to choose a life partner has been circumscribed in many societies but it has faced the most vicious, often murderous, opposition in Indian society. This right was hard won through the constitution but even today, accessing this right remains difficult and dangerous for most Indian women. Indian society continues to be in thrall to the caste system, the Varna Ashram Dharma which can apparently only survive if women marry within their own caste group. 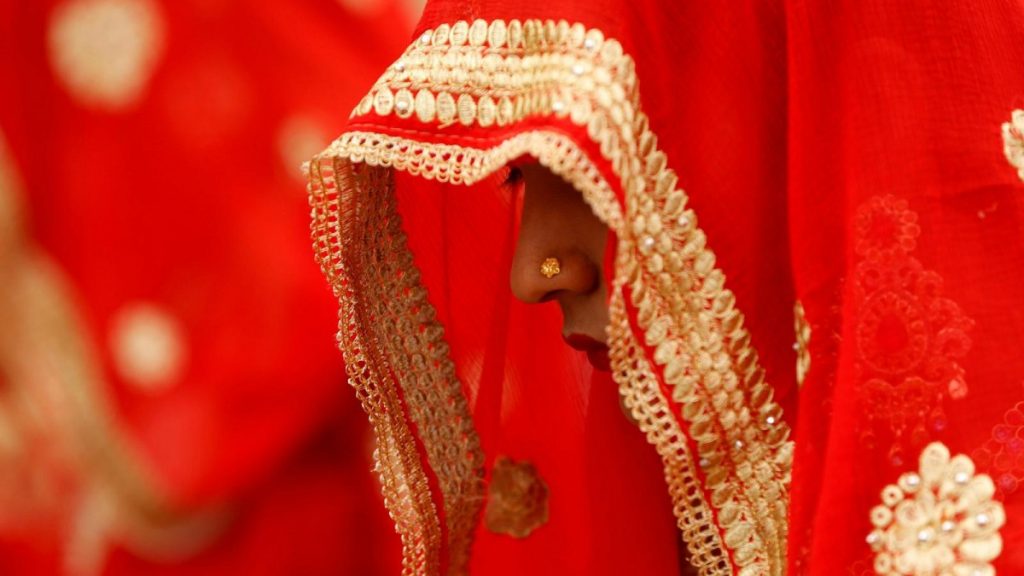 The burden of preserving this iniquitous system which ensures their own inequality along with that of most other Indians, has been placed squarely on the shoulders of Indian women. It ensures the imposition of various restrictions on the exercise of their rights.

The aversion that the Sangh Parivar displays towards the constitution and their veneration of the Manusmriti makes it the most formidable opponent of women’s rights. The widespread acceptance of Manu’s tenets that deprive women and the castes that make up the toiling and exploited classes by much of Indian society, including those who are discriminated against, provides the Parivar social sanction for their attacks on constitutional rights.

These have intensified after the BJP came to power at the Centre and in several states.

The Manusmriti is explicit about what it calls the revolting nature of the progeny of inter-caste marriages between women of a ‘higher’ caste and men of a ‘lower’ caste and marriages with ‘mlechhas’. ‘Mlechha’ was a term used at that time for Yavanas, Huns etc., to describe those completely beyond the pale of Varna Ashram Dharma. Later, it was used for Muslims.

Women who enter into such marriages are to be cruelly punished along with their partners. The Sangh Parivar professes commitment to building Hindu unity but continues to block comprehensive legislation against the ‘honour’ crimes that are being committed every day in many parts of our country. Its vociferous support to legislation like Adityanath’s ordinance and other laws passed by BJP governments should not deafen us to their silence on ‘honour’ crimes in which Hindus of different castes are being attacked and killed.

The Parivar accepts Varna Ashram Dharma as its ideal social formation and denies that it has been responsible for the conversion of millions of ‘low’ caste Hindus to Islam and Christianity, a historical fact that was recognised and castigated by even Vivekananda. Its insistent claims about alleged bribery and threats being responsible for conversion finds resonance in the legislation that it regularly resorts to against conversions away from the Hindu fold.

Also read: As India Bolsters Its Anti-Muslim Credo, Where Is Hindu Society’s Outrage?

It is interesting to note that the propaganda around interfaith and intercaste marriages also depicts Hindu women as gullible, foolish and infantile, echoing the Manusmriti. The intention, after all these centuries, is the same: to deprive Hindu women of their rights so that they continue to fulfil their primary responsibility which is to maintain the purity of the caste system.

Adityanath is the most ferocious exponent of the Sangh Parivar’s commitment to the ‘laws’ of Manu. The attacks on women’s rights, livelihood and security in Uttar Pradesh are particularly vicious.

Attacks on democratic rights and the rights of workers and farmers are continuing to intensify. Walls of prejudice and communal polarisation have been built and are being strengthened in an attempt to hide these harsh realities even from those who are suffering.  The struggle against these sufferings must also break these walls down.