Speeches made by Adityanath and Anurag Thakur during an election campaign in Amreli were clearly aimed at dividing the electorate on religious lines. 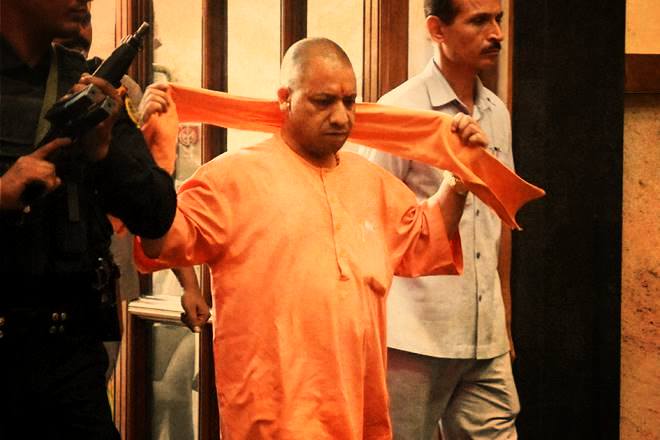 The speeches, which were made with the clear intent to divide the electorate on religious lines, were first reported by The Quint. In a video published by the news website, Adityanath is seen invoking militant Hindu sentiments by praising the Babri Masjid demolition by karsevaks.

“It is on this day (December 6) in 1992 that karsevaks showed the might of Hindu forces, something that had been kept suppressed for years…The BJP is working to create a Ram rajya in UP,” he can be heard saying in the video.

For the record, the demolition of the mosque is the subject of a criminal case currently being prosecuted by the CBI before a special court in Lucknow.

The purpose of his speech at the BJP’s election rally was clearly to whip up Hindu nationalism around constructing a Ram mandir in Ayodhya. Adityanath and fellow speaker Anurag Thakur were welcomed with chants of “Mandir wahin banayenge (We will build the temple there)”, a reference to the BJP’s call to build a Ram temple where the Babri Masjid used to stand in Ayodhya. The slogan became the catchphrase of Hindutva activists during the Sangh parivar-led Ram janmabhoomi movement in the late 1980s.

“If India has to remain as India, we have to understand and respect Hindutva,” he said.

In a dig at Rahul Gandhi’s recent temple visits in Gujarat, he said that while the Congress president-in-waiting was visiting Somnath temple, his grandfather opposed its reconstruction even as Sardar Patel had envisioned its revival (again recalling destruction of the temple by Mahmud of Ghazni in 11th century CE). He also said that the Congress says that Ram and Krishna did not exist at all.

“If Ram and Krishna did not exist, then who is Rahul Gandhi worshipping in Dwarkadhish temple? The Congress will have to stop insulting our faith,” he said as a few people in the front rows yelled in support.

“At one level, you are visiting temples in Gujarat and at another level you send Kapil Sibal to the Supreme Court to oppose the construction of the Ram temple…This doublespeak will not work,” he said, adding that Rahul opposed his initiative to host Deepawali celebrations in Ayodhya earlier this year.

Raking up Rahul’s “foreign”connection, he said, “The Congress did no vikas when it was in power here. The only vikas they did was for the mafia. That is Rahul Gandhi’s heritage. The word ‘mafia’ comes from Italy after all.”

“Congress was constantly asking why I am going to Ayodhya so frequently. So I asked them should I also go to Italy?” he said.

Adityanath ended his speech by exhorting the crowd to defeat Gandhi. “Those who do not hold Lord Ram dear, they should be denounced, regardless of how much you like them. The tradition of India is the tradition of Lord Ram. Those who oppose him, they are of no use to us,” the UP chief minister said in his speech three days ahead of the first phase of polling.

Earlier in the rally, Thakur recalled the JNU sedition debate and the ‘surgical strike’ on a terrorist camp across the LoC, and emphasised the construction of a Ram temple – all issues which were sharply debated between supporters of the BJP and opponents of militant Hindu nationalism.

“What date is it today? December 6. Do you remember December 6? The wait has gone on too long. Twenty-five years have passed. Should the wait end?” Thakur asked as the crowd shouted in agreement.

He attacked Gandhi for supporting JNU students, who he said consider terror-accused Afzal Guru and Yakub Memon “martyrs” and claimed that they raised the slogan “Bharat ke tukde baar baar”. Thakur further whipped up violent excitement in the crowd when he said, “Tum jitne Afzal Laoge, hum utne Afzal maar girayenge (As many Afzals as you bring, that many Afzals we will kill).”

The two leaders relied on a mix of criticism of dynasty politics, the BJP’s age-old tactics of religious polarisation and Rahul’s alleged “foreign” origin to attack the Congress. While one may wonder how the issues of JNU or Kashmir relate to immediate concerns of people in Gujarat, who have been articulating their worries over a farming crisis and unemployment, the BJP leaders nonetheless chose the Amreli rally to divert the poll campaign towards these issues. Patidar-dominated Amreli is one of the districts in the Saurashtra region, along with Botad and Morbi, where sustained agitations against the state government have been taking place since 2015. The polarising speeches may be one of the BJP’s political instruments to neutralise the hostility against it.

However, the marked departure from vikas towards militant Hindu nationalism betrays a clear shift in the BJP’s focus during the last week of electoral campaigning.