A Bindi, a Hijab and the Inequality in What Is Proclaimed to Be Indian

The understanding is that everything Hindu is Indian and cultural, while Muslim and Christian practices are not intrinsically Indian, they can never be culture, they will remain narrowly religious. 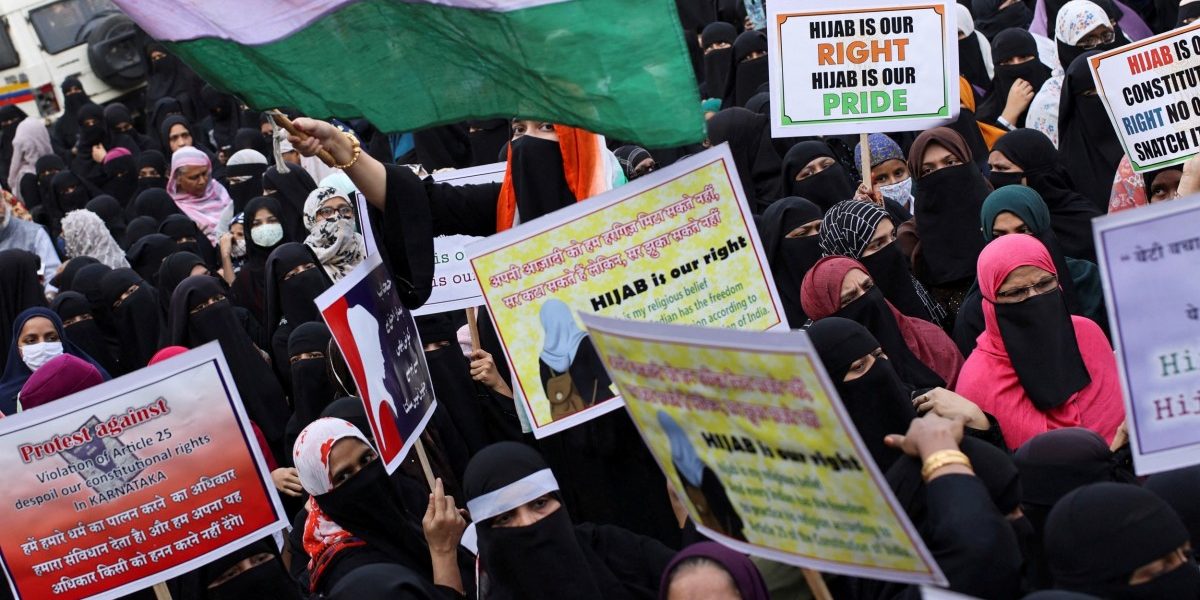 A woman waves the Indian flag as others hold placards during a protest against the recent hijab ban in schools in Karnataka state, on the outskirts of Mumbai, India, February 13, 2022. Photo: Reuters/Francis Mascarenhas/File Photo

The visuals of a Hindu teacher, bindi on her forehead, sindur proudly displayed, disrobing her Muslim, hijab-wearing colleague has proven, if anyone had an iota of doubt, that the so-called anti-hijab row in Karnataka is not about the hijab. It is a painful video to watch – a teacher being humiliated in full public view by her colleague, her supposed equal. What’s next? Will Hindu male teachers chop the beards of their Muslim colleagues before they enter the temples of education?

In the name of uniformity, an inequality has been created legally. This is a new inequality; it did not exist before the court order.

Once you create a new inequality, it is difficult to extinguish it; even if this ‘interim’ ban on the hijab is lifted, the harm won’t be undone. Inequality, even if temporary, brings with a feeling of humiliation. That is not temporary.

Before discussing it, we should also understand that a withdrawal of the ban will require an ethical miracle, highly unlikely in the present-day courts. The courts have also, and we must accept it is not new, found the power to discuss and decide the religious, traditional practices of Muslims, and it is difficult for them to let this go. This power to decide what is essential in the religion of others is intoxicating. Indian courts have been doing it without realising that when they do it, they do it without authority.

The courts should listen to Premchand to understand the complexity of the question of authority. A Hindu scholar started publishing a translation of the Quran with his commentary. Premchand, while reviewing it, said that without getting it vetted by a Muslim Islamic scholar and theologist, it was not prudent for a Hindu to publish his translation of the holy book. He was cautioning the translator that his subconscious biases or ignorance might affect and colour the work. So, he needed to restrain himself.

Enough has been written about the futility and impossibility of the exercise of deciding what is essential to a religion or not. It cannot be done by a secular court and should not be attempted. It should be sufficient for them to see whether a practice is held genuinely by a group or not; otherwise they will reach an absurd judgement like the one which declared that the Masjid was not an essential part of Islam. The court appeared not to realise that this order can lead a majoritarian power to demolish and destroy mosques at will, and yet claim that this is not religious persecution. That was also at the back of the minds of the judges who held the belief of the birth of Ram at that very spot essential to the Hindu faith, while taking away the land of the Babri Masjid from the Muslims.

The judges have emerged from this world, and they know too well which practice is genuinely important to a particular population. They know that the saffron headgear now used against the hijab is not genuine. It is actually a weapon. But they created a spurious equality, comparing it with the hijab.

The strictness and zeal with which Hindu teachers and administrators are performing this duty of uniformising their educational institution tells us that they have discovered a power over their Muslim counterparts. Students and teachers alike. Also imagine the humiliation of a Muslim teacher who is asked to get hijabs removed on behalf of the institution. Would she be so communal as not to get this secular order established?

Can the courts take their order in its logical direction and direct bindis, sindur and bangles to be removed? They will not, and why?

This episode also leads us to another question. Hindus are made to believe that they’re the most tolerant community in India. That they’re open to other cultures, unlike Muslims or Christians. They know about them. The truth is that most Hindus know very little about both Muslims and Christians, and non-Hindus minorities on the contrary know a lot about Hindus. This is why the BJP can spread the propaganda of Shah Rukh Khan “spitting” at Lata Mangeshkar’s funeral, because Hindus know very little about Muslim prayers, leave aside prayers offered at funerals.

They call Christian schools “missionary schools”. They are often attacked and vandalised for promoting an alien religion and culture. Muslim schools are called madrasas. It is not hard to guess how ruthlessly and relentlessly madrasas are demonised. Then there are Hindu schools – but hardly anybody talks about them. In fact, even supposedly secular institutions by default are Hindu institutions, as are secular parties.

The advocates of no religion in “temples of education with no place for religion” fail to comment on everyday Hindu activities in schools and colleges. Hinduism comes to the classroom as culture and common sense. Non-Hindus are actually homogenised through this facade of diversity instead of being included or their identities being respected.

Lighting of a lamp, singing the Saraswati Vandana, offering obeisance before a Saraswati idol are seen as a cultural practice but eyebrows are raised when programmes at Jamia Millia Islamia or Aligarh Muslim University start with Tilawat. What is culture, what is custom? Does the predominance of Hindus not colour the culture of India? This is what Nehru had said. This makes Arvind Kejriwal so audacious as to ask all Delhiwalas to do a pooja on Diwali. Why cannot Muslims do pooja? Why are they so sectarian? Can he ask all Delhiwalas to offer namaz on Eid? The question sounds awkward.

Many other well wishers of Muslim women think that this might be an opportunity to liberate them from this oppressive custom. But this is no liberation. The closest parallel to such brazen ruthlessness under the garb of emancipation is that of the US providing democracy to Iraq through carpet bombings.

The crudity and vulgarity on display in Karnataka cannot be called emancipation in any way. It seems to be a part of a slow cultural genocide which demolishes places of worship and acts of Muslim religiosity, criminalises food habits through lynchings and draconian laws, changes names of cities and purges every visible sign of the Muslim presence in Indian society.

The understanding is that everything Hindu is Indian and cultural, while Muslim and Christian practices are not intrinsically Indian, they can never be culture, they will remain narrowly religious. For Hindus to feel equal, Muslims and others need to shed their identity markers. Why do Muslims speak Urdu in Karnataka and Miya bhasha in Assam? Only by leaving all this can  they “Indianise” themselves and make public spaces equal.

In the court proceedings, it was asked if not proscribing hijab should mean a permission to wear it. The court took it to its logical end by asking if one can carry a weapon in the class since nowhere in the rulebook is prohibited. A more logical question would have been: if one comes to the school wearing a hijab since it had not been disallowed, can someone also enter the campus sporting bindi or sindur as it is also not forbidden? That line of questioning would have helped them establish a notion of substantive equality. But the fact that they could not ask this question should lead them to introspect about their own inadequacy to fully answer the first question.

Alishan Jafri is a freelance journalist based in Delhi and Apoorvanand teaches at Delhi University.